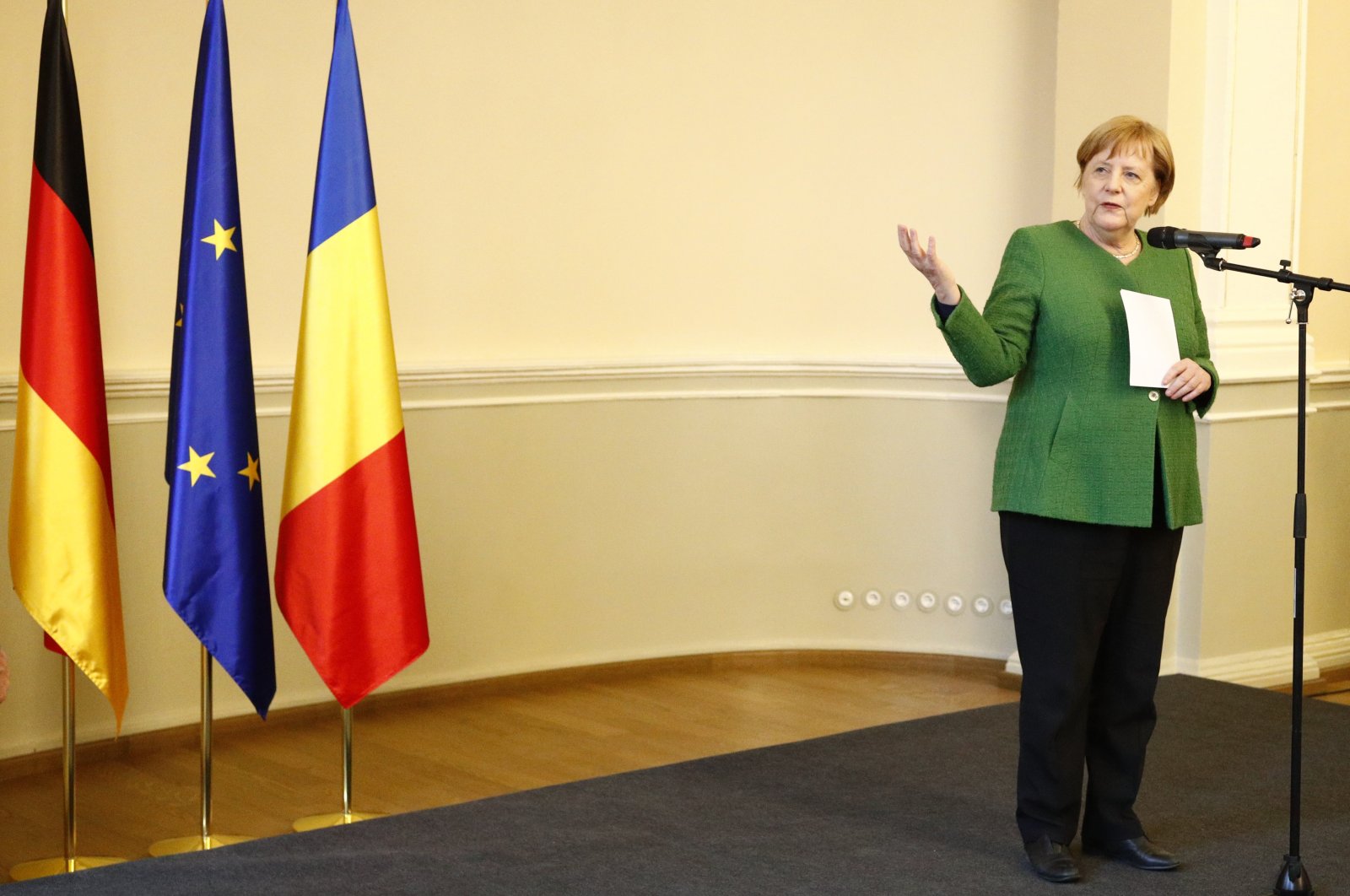 German Chancellor Angela Merkel delivers a speech during a meeting with members of Romania's German minority after an informal European Union summit, Sibiu, Romania, on May 9, 2019. (AP Photo)
by Yunus Mazi Jan 12, 2021 12:05 am
RECOMMENDED

In the 12th century, a large number of Germans immigrated to Eastern Europe to establish trade in this region. From this group, many Germans also settled in Romania, especially in Transylvania. The group of so-called Romanian Germans continued to grow in the following centuries, mainly due to further emigration from Germany.

The Romanian Germans have been able to maintain their culture, language and religion for more than 850 years. However, the number of Romanian Germans drastically decreased during and after the Cold War due to immigration to Germany.

The relationship between Germany and the Romanian Germans has always been very close. Although the German minority settled in Romania, it wished to reunite with Germany in recent centuries.

Even during the Nicolae Ceausescu regime during the Cold War, the German minority was allowed to continue its Protestant and Catholic practices in churches, albeit with restrictions. This was not a given during the communist era.

After the end of the Cold War, Romania, like the other Eastern European countries, underwent a transformation process. In this process, the integration of democracy and the rule of law was declared as the ultimate goal. Germany concluded a bilateral agreement with Romania in 1992, and in 1995 and 1996, these two countries concluded additional cooperation agreements in the fields of education and culture.

These treaties have greatly strengthened German-Romanian relations in the long term. During this process, several German institutions, foundations and companies have established themselves in Romania.

According to their own statements, these foundations independently pursue the goal of strengthening the rule of law and the democratization process in Romania.

Although these foundations act independently of each other, they adhere to certain guidelines of Germany's foreign policy. Joint cooperation may also take place between these political foundations if interests overlap in one field.

Most cooperation takes place between the Konrad Adenauer Foundation and the Hans Seidel Foundation because of their political proximity.

Above all, however, these organizations serve to train potential politicians in Romania and to network them with German politicians and academics.

To strengthen this networking, these foundations organize educational excursions to the Bundestag, for example. This also increases Germany's influence on politics in Romania.

In addition, there are German schools in Romania run by the Goethe Institute and the Central Agency for Schools Abroad (ZfA), where students can take the German Abitur, a test needed to qualify to attend German universities.

Officially, there are 53 German-language schools, most of which are attended by Romanian children from the upper-middle class. This is mainly because the population of the German minority is very small.

In addition, Romanian families from the upper-middle class send their children to German schools because the children have much better chances in their future careers.

Furthermore, there is the German Academic Exchange Service (DAAD), which also supports the exchange of students and academics between Germany and Romania.

Cooperation in the field of education extends to developments in the economic field. Since the end of the Cold War, the volume of trade between the two countries has increased constantly.

In 2019, the trade volume between the two countries amounted to over $20.7 billion. Germany is considered the most important economic partner for Romania.

Despite its relatively small size, Romania is also considered an important trading partner for Germany, ranking 20th among all countries worldwide.

There are currently about 7,500 registered companies in Romania with German participation. Companies like Mahle, Bosch, Conti and Hella are particularly present in Romania. Daimler has also invested around 300 million euros ($365 million) in Sebes, Transylvania.

In addition, German retail chains such as Kaufland have also discovered Romania as a location. According to the German-Romanian Chamber of Industry and Commerce, German companies are the third-largest foreign investors in Romania in terms of capital investment.

What about the press?

The German minority has been running its own daily newspapers in German for over several centuries, which have been closed down time and again. Currently there are only the Allgemeine Deutsche Zeitung (ADZ) and the Siebenburgische Zeitung.

Several ethnic groups live in Romania, and the Romanian parliamentary system allows each ethnic group to be represented in Parliament by at least one lawmaker from the respective ethnic group. The DFDR provides the parliamentarian who is to represent the German minority in the Parliament of Romania.

Furthermore, it should be underlined that the DFDR is state funded by Romania and Germany. In 2010, the German Federal Ministry of the Interior confirmed that it was providing 1.65 million euros to the DFDR.

The German minority serves a bridging function in German-Romanian relations. The DFDR is an important instrument for successfully implementing this bridge. For example, the DFDR lawmaker accompanies Romanian government leaders on their official trips to Germany to advise them. That parliamentarian plays an important mediating role on these trips.

Additionally, high-ranking politicians such as Horst Seehofer, Guido Westerwelle and Angela Merkel have visited the DFDR on their official trips to Romania. They repeatedly emphasize how important the DFDR and the German minority are for German-Romanian relations.

The domestic political influence of the DFDR can be illustrated by the example of Romanian President Klaus Iohannis.

Iohannis was himself a member of the DFDR and, after a successful term in Sibiu as mayor, he was able to be elected as the president of Romania for two consecutive terms in 2014 and 2019.

The activities of German foundations, institutions and educational establishments are of strategic importance for both countries. The German foundations have contributed significantly to Romania's successful transformation process.

Romania's accession to the EU in 2007 was the culmination of this successful transformation process. The educational and cultural institutions have helped not only to preserve the culture and language but even to pass them on to parts of the Romanian majority population.

Through improved relations, a successful transformation process and support for the German language, both countries were also able to benefit from each other economically.

The German minority has also contributed to the preservation of the German-Romanian community by founding communication media. The foundation of the DFDR is not only an important means of establishing direct contact with the German government but also of exerting a certain influence on Romanian politics.