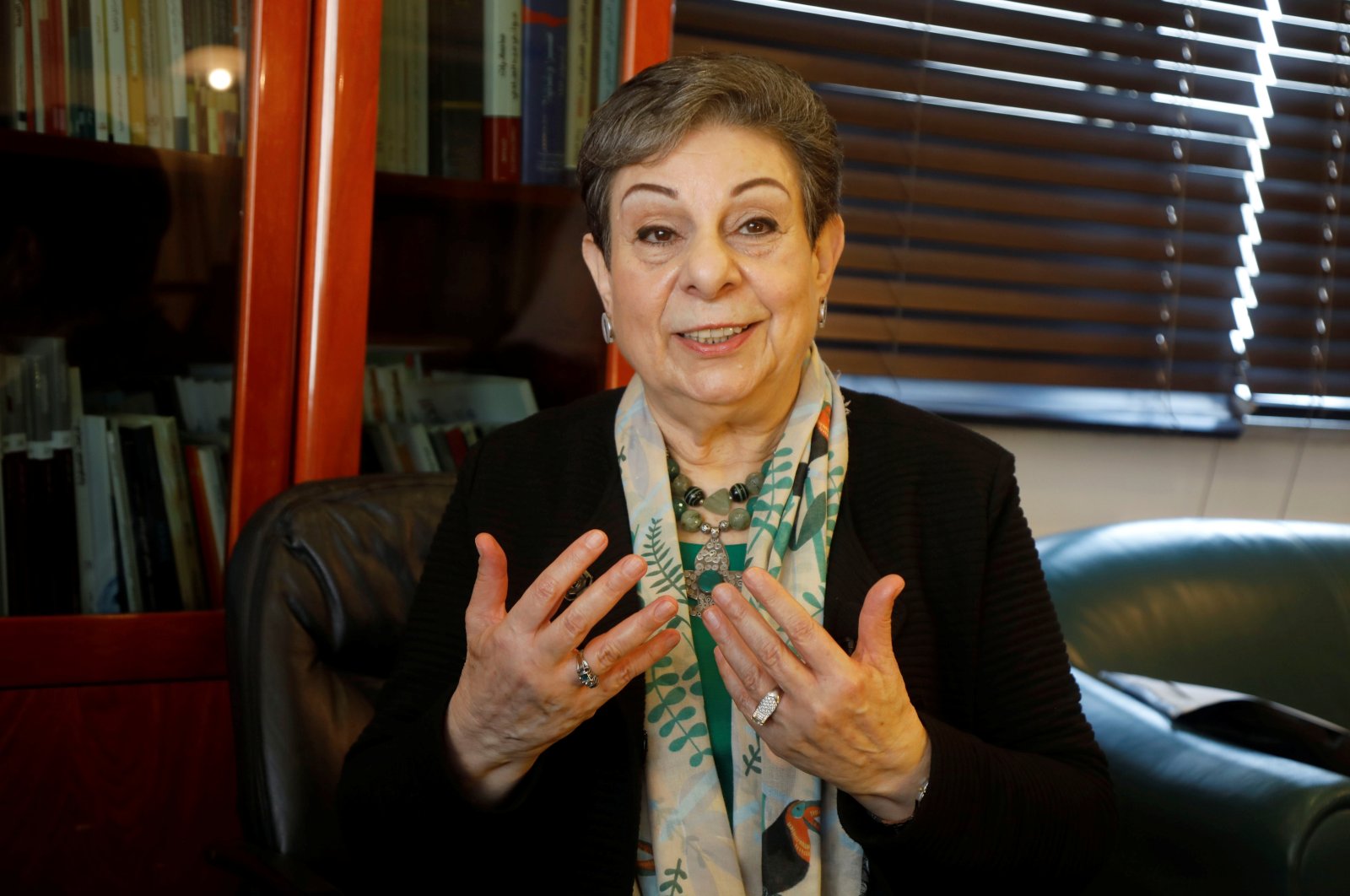 Ashrawi's stepping down is more than bad news for Palestine's fight for self-determination, peace and gender equality

Hanan Ashrawi, the distinguished Palestinian leader, legislator, activist, scholar, women’s rights advocate and best-known spokesperson for the Palestinian cause in the Western press, quit her senior post in the Palestine Liberation Organization (PLO) at the end of 2020, calling for political reforms.

The daughter of Daoud Mikhael and Wadi‘a As‘ad, Hanan was born in 1946 in Nablus, where her father worked as a physician. The family moved to Tiberias before fleeing to Amman in 1948, eventually settling in Ramallah, where Hanan grew up with her four older sisters Huda, Muna, Abla and Nadia.

Upon graduating from Ramallah’s Friends Girls School, Hanan enrolled in 1964 at the American University of Beirut to study English literature. Here, she joined the local branch of the General Union of Palestinian Students – becoming its spokesperson – and the General Union of Palestinian Women, participated in the activities of several associations, such as the Fifth of June Society, and worked in the social and media fields in Beirut’s Palestinian refugee camps.

Ashrawi’s political activism was inspired by her father, whom she described as an “advocate of women’s rights ... quite progressive,” and a “socialist.” She told the Sojourners magazine in 2005 that her father explicitly told her that, “We raised you not to feel in any way that you are handicapped by your gender or your upbringing, so do not accept to be defined or limited by others.”

She recalls that her parents instructed her to be daring and courageous, speak up and stand up, engage actively in matters of justice, and act on issues important to her according to her own convictions.

Having earned a bachelor’s and a master's of arts in English literature from the American University of Beirut, she traveled in 1969 to the United States, where she continued her graduate studies at the University of Virginia. But she returned to Palestine in 1973, before completing her thesis in comparative and medieval literature, to found Birzeit University’s Department of English Language and Literature, which she chaired until 1978 and again from 1981 to 1984.

While on leave, she returned to Virginia to complete her doctoral thesis, defending it during the 1981-82 academic year.

As a Birzeit university faculty member, Ashrawi was frequently the target of harassment by the occupation authorities because she joined demonstrations and strikes organized to protest Israeli soldiers’ violent incursions into the campus or their repeated closures of the university. She was detained for one day on many occasions, frequently on specific dates on which mass protests were organized to commemorate events such as the 1967 occupation of the West Bank, East Jerusalem and the Gaza Strip on June 5, as well as the issuing of the Balfour Declaration on Nov. 2 in 1917.

Ashrawi’s political and advocacy engagement has been a lifelong pursuit. She was a member of the political committee of the first popular intifada that erupted in December 1987.

Entrusted by the PLO leadership, she then became a member of the Palestinian delegation that met with then-U.S. Secretary of State James Baker before the opening of the Madrid Peace Conference in October 1991.

In January 1996, Ashrawi was elected a member of the Palestinian Legislative Council (PLC), representing Jerusalem, and headed the council’s political subcommittee for one year and the Legislative Reform Committee between 2000 and 2005.

Between 1996 and 1998, she served as the minister of higher education and scientific research, resigning from her post to protest the Palestinian Authority's (PA) failure to implement government reform plans and due to differences with the Palestinian leadership over the conduct of peace negotiations. In 2006, she was reelected to the PLC, representing the list "the Third Way," headed by Salam Fayyad.

A champion of women’s rights, she was in 2009 the first woman to be elected a member of the PLO’s executive committee where she also served as head of the Culture and Information Department. In 2018, she was reelected, heading its Department of Public Diplomacy and Policy until her resignation in December 2020.

The timing of the news

Ashrawi did not provide an explanation for her resignation from the PLO Executive Committee but did say that the committee had been marginalized. “I believe it is time to carry out the required reform and activate the PLO in a manner that restores its standing and role, which includes respecting the Executive Committee’s mandate rather than marginalizing and excluding this body from decision-making,” Ashrawi said in her resignation letter.

“The Palestinian political system needs renewal and must be reinvigorated through the inclusion of youth, women, and further qualified professionals,” she added.

Sama Aweidah, the general director of the Women’s Studies Centre human rights organization, commented on Ashrawi’s resignation, saying: “I’m sure that Dr. Hanan has good reasons for resigning. She is not a careless person and takes no decision lightly. Dr. Hanan refused to accept that the PLO Executive Committee was prevented from playing a meaningful role and that all decisions were taken by the president’s circle. I certainly respect her position and agree that she should not accept such an inactive role.”

Aweida added: “Dr. Hanan means a lot to me. When in 1978, I was dismissed for political reasons from the University of Jordan, Dr. Hanna Naser (the exiled president of Birzeit University, who was living in Amman) was very supportive and recommended that I meet with Dr. Hanan once I was back in Palestine. I did, and she was very reassuring and helped me enroll in Birzeit University without any obstacles.

“Moreover, Dr. Hanan has always supported women and stood by feminist organizations, participating in their activities and advocating for their demands at various levels. To me, like every Palestinian woman, Dr. Hanan is truly an example of a strong woman. She is one of the women who have proven that women can make their voices heard,” Aweida asserted.

When asked about his opinion on Ashrawi’s sudden resignation, business consultant, writer and activist Sam Bahour said: “I have a lot of respect for Dr. Ashrawi. Growing up in the diaspora in Ohio, I knew of her activism in the first intifada that began in 1987. When she made headlines at the 1991 Madrid Conference, I witnessed how impactful she was in articulating our struggle to foreign audiences, especially in the United States. Being a woman, Christian, fluent in English, and rational in her politics carries a lot of weight in the West. As I have lived in Palestine during the last 25 years, I have been able to follow her work more closely. I gained a more nuanced understanding of her character when I watched her operate locally – as tends to be the case with Palestinian leadership figures who are idolized abroad – even though most Palestinian leaders’ engagement with the grassroots is limited.

“Sentimental values aside, Dr. Ashrawi has been part and parcel of the PLO leadership apparatus that has been part of the problem for decades now. Having accepted to go with the flow for so long – even though we can assume that behind closed doors, she was a voice of dissent – her stepping down this late in the game seems more an indication of jumping a sinking ship than real opposition, even though she calls for reforms.

“When I think of her generation of Palestinian leaders, I recall a line I recently read, published in Medium by the writer Sal who wrote that sometimes, the aura of a person becomes more significant than the person itself. I think this applies to many of our movement’s leaders,” Sam concluded.

A number of organizations have been founded and headed by Ahsrawi, most significantly the Independent Commission for Citizens’ Rights (renamed the Independent Commission for Human Rights in 2007) that aims to protect the individual’s rights in Palestinian legislation and PNA practices; the Palestinian Initiative for the Promotion of Global Dialogue and Democracy (MIFTAH) that aims to uphold the principles of democracy and sound governance in Palestinian society and advocates decision-makers and world public opinion regarding the Palestine cause by engaging in dialogue and information exchange; and the Coalition for Accountability and Integrity (AMAN), a civil society movement that seeks to combat corruption and enhance integrity, transparency, and accountability in Palestinian society.

Ashrawi is a board of trustee member of several Arab and international institutions, including Birzeit Universit, the Institute for Palestine Studies, the Independent Commission for Human Rights (ICHR), the United Nations Research Institute for Social Development (UNRISD) and the Council on Foreign Relations in Washington, D.C.; she serves on the World Bank’s organizational unit for the Middle East and the northern Africa region.

Among the prizes and medals she has won are the Exceptional Arab Woman Prize for Political Activism from Dubai’s Center for Arab Women’s Studies (2005), Sweden’s Olof Palme Prize (2002), the Sydney Peace Prize (2003), UNESCO’s Mahatma Gandhi Medal (2005) and the French Ordre national du Mérite (2016).

Ashrawi will remain a pioneering Palestinian national, political and feminist figure, remembered as one of the outstanding women of Palestine and the Arab world, excelling in politics, diplomacy, the media, academia, culture and on the social level.

Her contributions to the development of Palestinian civil society include the founding of civic institutions and the transmission of the voice of Palestine to the world. Her writings include works on Palestinian literature, literary criticism and articles on Palestinian culture and politics, as well as poems and short stories.

Ashrawi worked tirelessly to bring democracy and gender equality to Palestine and her advocacy for human and women's rights, policy formation, peacemaking, and nation-building efforts have had a significant impact on the region.

One of the most influential women in the Arab world, she will remain an advocate of Palestinian self-determination and peace in the Middle East as she continues to highlight “the importance of raising your voice on behalf of peace, justice, human dignity, and,” as she asserts, “the integrity of life itself.”