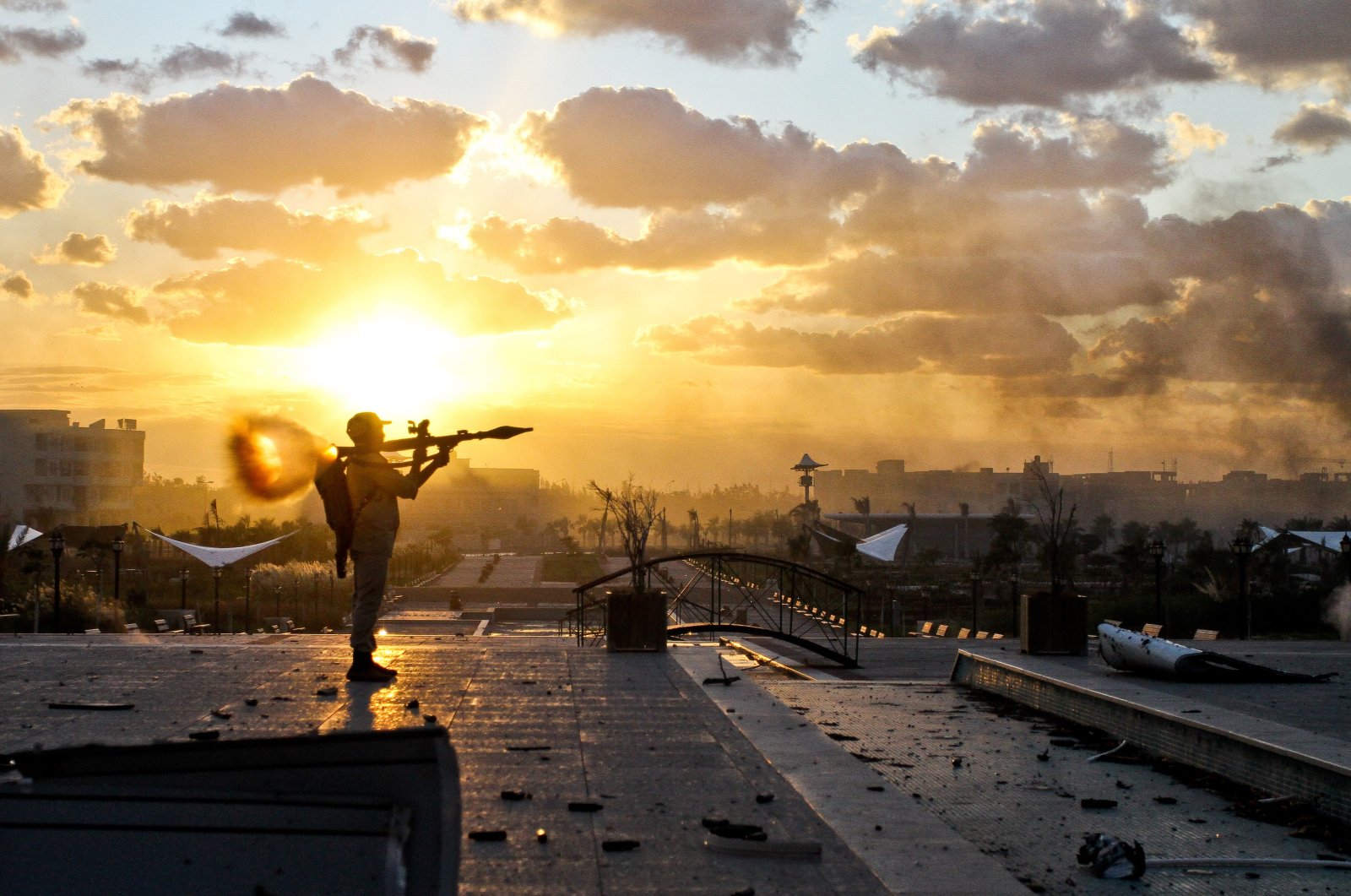 A Libyan fighter fires his rocket-propelled grenade toward buildings in District 2 of Moammar Gadhafi's home city of Sirte, Libya, Oct. 11, 2011. (Photo by Getty Images)
by Imad Atoui Oct 22, 2021 12:05 am
RECOMMENDED

In my last piece "Chronic Algeria-Morocco rift: Exception in Arab world?" I claimed that the chronic tension between Morocco and Algeria is a reflection of the long historical dispute between Arab republics and Arab kingdoms. For some, the argument seems outdated and inadequate, but it still maintains veracity.

However, the fact remains that some republics joined the kingdoms, such as Egypt. Then, how can one account for this anomaly?

That is to say, instead of focusing on categorization, we can analytically distinguish the two groups by the forces that create and sustain them.

Successive geopolitical events have shaken the Arab republics and led to them taking on certain characteristics of kingdoms. With the Cold War and the Camp David Accords (the 1978 agreement between Egypt and Israel), Egypt eventually threw it in and joined the kingdoms’ camp after the defeat of the Arabs against Israel in 1973. In practicality, Egypt has since then come under the U.S. umbrella. Yet, all republics have been critical of the U.S. – Iraq's Saddam Hussein, Yemen's Ali Abdullah Saleh, Libya's Moammar Gadhafi, Syria's Hafez Assad and Algeria, which still is.

The end of the Cold War was a detuning geopolitical event for the republics. The collapse of the Soviets left Arab republics isolated without any protection. The unipolar system headed by the U.S. has softened up against the republics despite the fact that they have all maintained ties with Russia.

The Arab Spring and 9/11 were also decisive geopolitical events for republics. The 9/11 terrorist attacks generated the U.S. invasion of Iraq in 2003, and the Arab Spring took a heavy toll on the republics. Both events concussed the republics’ posture; Iraq became an advanced military barrack for the U.S., while Yemen and Libya are still in the process of "U.S.-ification."

Republics took on the kingdoms' characteristics forcibly. The defeat of the Arabs against Israel resulted in Egypt’s succumbing to the U.S. The implications of 9/11 swerved Iraq into the U.S.’ sphere of influence after being in a more awkward position during Saddam’s tenure. Yemen has exposed the U.S.’ role and involvement through selling weapons to different actors indulged in the war. Libya is no longer a threat (rogue state) as it had been during Gadhafi’s era.

Republics are always threatening kingdoms. Despite the jolt that Arab republics have experienced, the republics' very structure is still maintained. Apart from Syria, the republics' behavior highlights how they play a proxy role in favor of the U.S.

On the eve of the Arab Spring, the Egyptian revolution brought forth a critical system to both kingdoms and the U.S. Economic development that the new system it sought to achieve was detrimental to some neighboring kingdoms; making an independent political decision by achieving self-sufficiency and Suez Canal expansion that would inflict bankruptcy on many seaports of neighboring countries.

For the U.S., the new Egyptian foreign policy diverges with its interests. Besides the Egypt-Russia rapprochement, developing, reconstructing and changing the Sinai’s demography was a red line that the new Egyptian system would have crossed. Thus, a new resilient system was supported and welcomed.

Libya is still perplexing. The U.S.’ role to end the war in Libya is still waving, although the political resolution process is in place. Yet, there is no guarantee that the U.S. will contain the future Libya. While the western part of Libya seems to appease U.S. interests, the uncontrolled Libya National Army (LNA) headed by putschist Gen. Khalifa Haftar casts heavy expectations on what is to come. Even though the political process is taking place, the republic would rejuvenate itself to an extent if armed factions are included in the political process.

Algeria is still not shaken. From all the Arab republics, Algeria and Syria did not join the kingdoms’ clique. Syria has already doubled down on Russian protection while Algeria has maintained the structure of the republic without joining the kingdoms’ posse. The Arab Spring that shook Arab republics could not make Algeria carry the characteristics of the kingdoms.

Algeria has maintained its structure because of its geopolitics. Amid the Chinese ascendency, Algeria's geographical position and strategic alliances still make the kingdoms and the U.S. reassess their positions. The implications of any attempt would potentially cast a heavy shadow on the entire Western camp’s interests (the U.S., the EU and aligning kingdoms). Given its location close to the Strait of Gibraltar some 300 kilometers away, Algeria acts as gateway state that links Europe and the Mediterranean deep into Africa. It would jeopardize Western strategic and economic interests if Algiers reacts against any strategic action.

Kingdoms can act offensively but that does not harm the geopolitical interests of the kingdoms’ given global power. For instance, the 1963 Sand War in which Moroccan offensive military action was balanced by an Algerian offensive reaction. After that, the U.S. mediated an end to the war. In contrast, the U.S. turned a blind eye to tensions between the Gulf kingdoms – namely, Saudi Arabia and the United Arab Emirates (UAE) versus Qatar – since all kingdoms are in the same camp, and the U.S. always has geopolitical interests there.

Whatever characteristics they have had, Arab republics are presumed to resurface. Historically, many kingdoms have turned into republics – Egypt (1953), Iraq (1958), Libya (1969) and Yemen (North 1962, South 1967). All of these kingdoms had never posed a critical challenge to the U.S. before having become republics. The forced characteristics that made republics join the kingdoms do not undermine the very nature of the structure of republics. This may lead readers to question why we have republics and kingdoms in the Arab world in the first place?