How Biden got Bosnia right in the 1990s 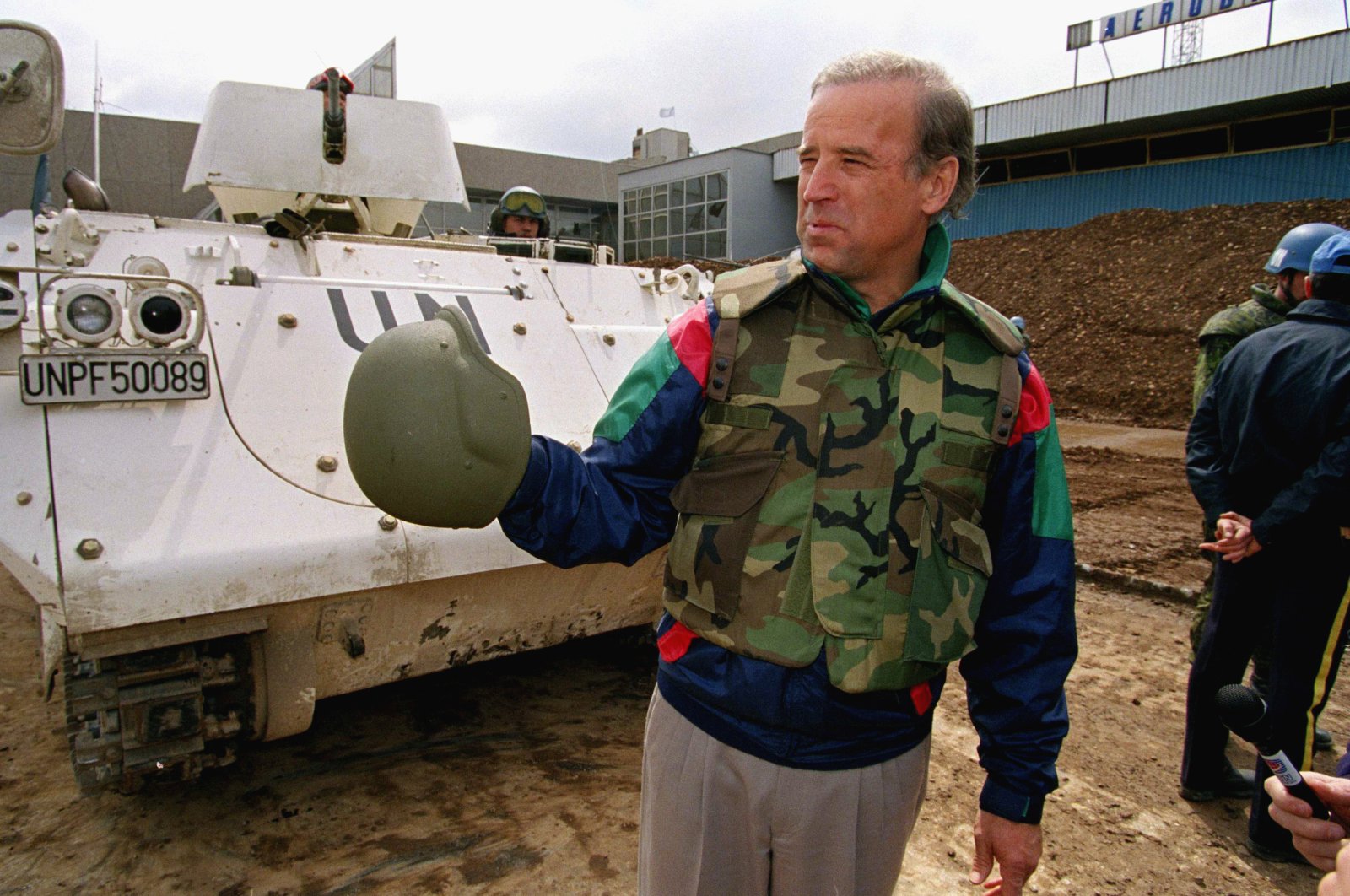 Sen. Joe Biden (D-Del.) stands in front of a Danish armored personnel carrier at the U.N.-controlled Sarajevo Airport, April 9, 1993, making a statement about his trip to the besieged Bosnian capital. (AP Photo)
by Hamza Karcic May 12, 2020 12:05 am

As Joe Biden moves closer to officially clinching the Democratic nomination, his claim to the job at 1600 Pennsylvania Avenue rests in no small part on his foreign policy experience. Long-considered a towering figure in his party’s foreign policy establishment, Biden’s record is now again under scrutiny as November nears. The former vice president and his surrogates tout his foreign policy credentials burnished over the years in the Senate Foreign Relations Committee and in the Obama Administration.

His detractors are quick to point out that this experience is mired in blunders through several key moments over the years. Biden voted against the First Gulf War and for the Iraq War – getting both wrong. That experience does not translate into sound judgement was brought home with great effect by Barack Obama in the 2008 primaries. This jab at both Biden and Hillary Clinton was not only true but also proved to be a reusable comeback.

Among the many issues that Biden got right in foreign policy was Bosnia. When Serbia and its proxies launched their war against Bosnia in spring 1992, the newly independent country faced unfavorable currents of history. The U.N.-imposed arms embargo effectively froze in place Serbia’s military superiority and curtailed Bosnia’s ability to defend itself. Along came European mediators, who took a page out of Neville Chamberlain’s playbook. They pursued a policy of appeasement cloaked in the language of peace plans. But there was no mistaking the intent.

Across the Atlantic, a number of senators and congressmen took up the Bosnian cause in the Capitol Hill. Their primary objective was to prod the Bush and then the Clinton Administration into taking a more decisive stand on Bosnia. The congressional Bosnia hawks undertook a sustained campaign aimed at lifting the arms embargo and providing military assistance to Bosnia. Leading the charge was Senator Bob Dole (R-KS), who was a consistent and forceful advocate. Sen. Joseph Lieberman (D-CT) supported Dole’s efforts and infused the undertaking with a bipartisan spirit.

The Delaware senator supported the Dole-Lieberman effort but also proceeded with substantial steps of his own. In September 1992, Biden sponsored an amendment, agreed to in Senate, which affirmed that “because the U.N. arms embargo is serving to sustain the military advantage of the aggressor, the U.N. should exempt the government of Bosnia-Herzegovina from its embargo.” Furthermore, this amendment authorized the U.S. president to provide military assistance to Bosnia following the lifting of the embargo.

During Senate testimonies on Bosnia, Biden was eloquently supportive. His informed and precise questions and comments reflected a clear grasp of the situation on the ground. In an op-ed in The New York Times in June 1993, Biden blasted the “U.N. appeasement on Bosnia” and called for a beefing up of safe areas in the country. In early June 1994, Biden and Dole visited the besieged Bosnian capital of Sarajevo.

In early 1995, Biden co-sponsored the Dole-Lieberman bill which provided for the lifting of the arms embargo. The Bosnia and Herzegovina Self-Defense Act of 1995 was one of the most significant pieces of legislation adopted in Washington during the war in Bosnia. On the 10th anniversary of the Srebrenica Genocide in 2005, the U.S. Senate adopted a resolution commemorating the genocide. Biden was one of eight co-sponsors of this landmark document.

Now that Biden’s foreign policy record is scrutinized again, credit should be given where it’s due. Biden got Bosnia back in the 1990s and did not mince his words. Though he may have subsequently at times exaggerated his role, Biden is on the record as having been a consistent advocate for the right of self-defense for a newly independent European state. The presumptive Democratic nominee may have moved somewhat to the left in the recent primaries but he was solidly on the right side of history for Bosnia in the 1990s.

*Associate professor at the Faculty of Political Science at the University of Sarajevo.