How coronavirus became a mental disease in India 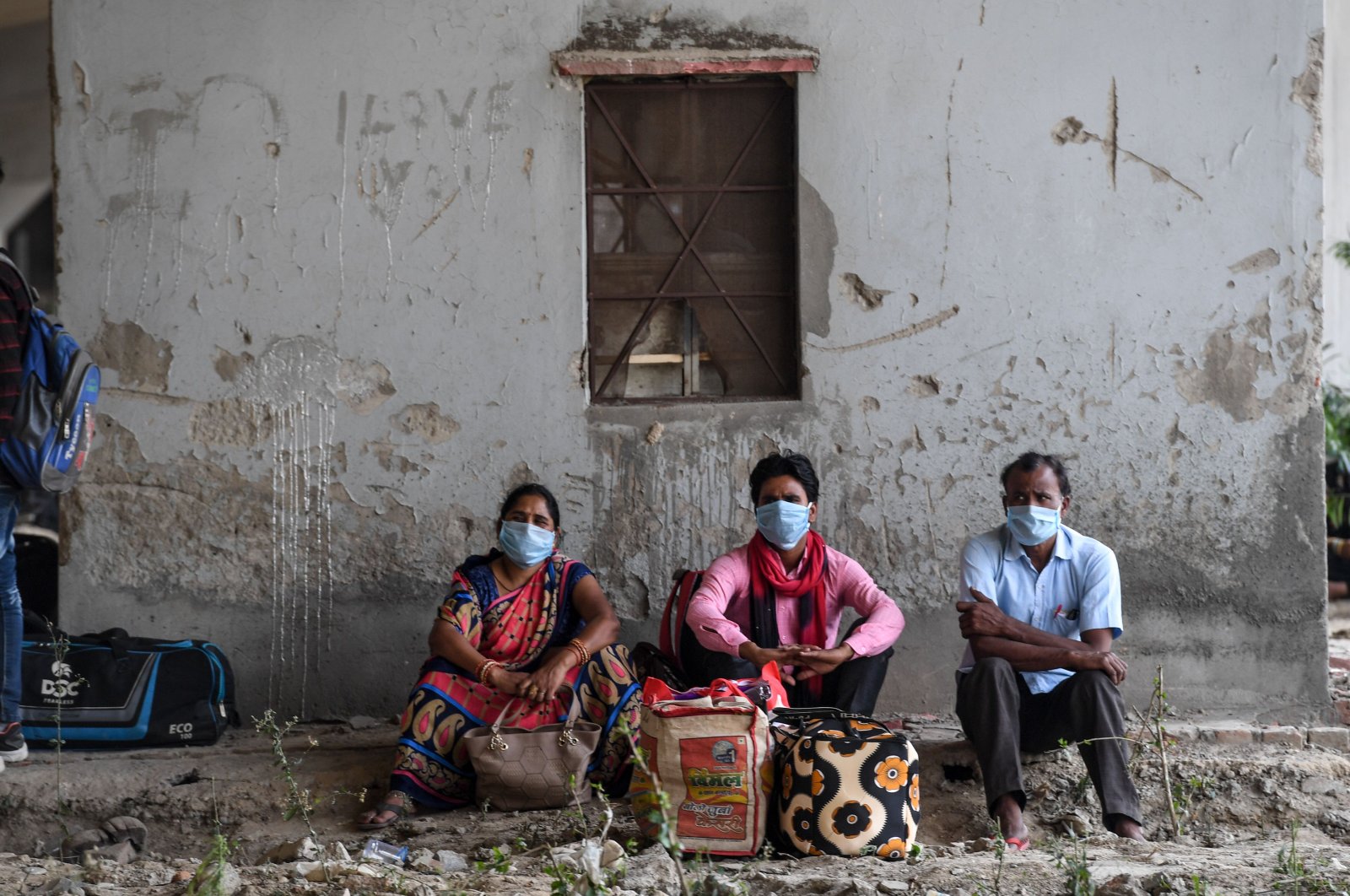 Migrant workers and families wait for transport to go to their hometowns in Uttar Pradesh and Bihar states after police stopped them from crossing the Delhi-Uttar Pradesh states border on foot as the government eased a nationwide lockdown as a preventive measure against the COVID-19 coronavirus, New Delhi, May 15, 2020. (AFP Photo)
by Shakir Husain May 18, 2020 12:05 am
RECOMMENDED

The coronavirus is causing India to become ill in a way that no other countries would consider normal. Slow to react to the pandemic, India has not tested its citizens for the infection in anywhere near sufficient numbers, and its initial response to the shortage of medical equipment and tools has left health staff frustrated.

Quacks, faith healers and various controversial politicians have had a jolly good time offering coronavirus cures. These include drinking cow urine to ward off the virus, rubbing one's hands on an owl's back, standing in the sunlight and so on.

Following this lackadaisical approach, India came to impose the biggest lockdown the world has ever seen. Not even in China, where the virus originated and played havoc in the city of Wuhan, could think of forcing its entire population indoors.

When Wuhan was put on lockdown, pretentious opiners among the Indian elite mocked Chinese authoritarianism to establish their own notions of democratic superiority, suggesting that putting millions under a long curfew was not possible under the Indian ruling system.

Ask Kashmiris and they might tell you about their democratic experiences of curfews, cordon and search operations, interrogations, being charged with draconian laws for expressing political opinions and being held up at military checkpoints.

Two things have become clear under the nationwide lockdown: India doesn't have a supply chain to speak of, and religious hatred fanned by Hindu nationalists has become out of control.

The shutdown also failed to flatten the curve of infections and India on May 15 surpassed China in the total number of recorded COVID-19 positive cases.

I feel sorry for India's cold supply chain and cargo transport, which were supposed to be functioning. Even the biggest Indian retail chains and dairy companies do not follow basic international standards in transporting and storing goods.

Public transport was shut down, leaving millions stranded. When the initial lockdown started, thousands of workers from remote areas employed in large cities defied it to go back to their hometowns.

Hungry and carrying their luggage on their heads, many poor workers decided to walk hundreds of kilometers rather than remain stuck in the cruel cities without any source of income. Some died on the way home. Many fell sick and suffered humiliation and robberies.

Construction workers, carpenters, electricians, cooks, cobblers, rickshaw drivers, domestic help – they all lived on a daily wage – yet once work dried up, they still had to feed themselves and pay rent for their lodgings.

Those who could not leave survived on charity, by borrowing money from others, while some were reduced to begging. Those with savings also have had to rely on erratic grocery deliveries, which are dependent on the whims of the police.

In some places, members of the Hindu nationalist group Rashtriya Swayamsevak Sangh (RSS), which puts heavy focus on its quest for global power – seeking to take over nuclear-armed Pakistan (and not-so-armed Bangladesh), was seen enforcing the lockdown.

How serious is India in tackling the pandemic? Some journalists and activists have not been timid in exposing the harsh realities of Indian society. Indian elites living in their gated communities hate to be reminded that India has the world's largest share of the poor.

A video on social media showed groups of people lying hungry, sleepless and without sanitation along the banks of the filthy Yamuna River. They were seen picking something to eat from a dump of rotten bananas, while across India, the poor queue up for free meals.

Many have been confined to their congested slums with no idea of the meaning of "social distancing." I spoke to Manoj Kumar, aged 40, from the eastern state of Bihar, who was trapped in construction workers' housing with about 300 people somewhere in the state of Haryana, near Delhi.

"There are three buildings with about 1,000 people. We are surviving on very little food. We have to buy things from outside with whatever little cash we have. Sometimes the shops open, sometimes they don't. There is no one to take care of us, we have not been paid by our employers," he told me.

"When we try to go out police thrash us and force us inside. There are rich people living in this area. Some own factories. When these factories reopen, they will exploit us and sell their products abroad," he went on.

"We do not want to die of hunger, but we don't know what will happen. Some media people came and reported about us, but our condition has not changed. Now the media is also not interested in talking about us. What will happen if you write all this? We do not exist to them," he said.

Kumar thought of leaving for Bihar on foot but realized he could not survive the journey. Some of his friends had gathered at Delhi's Anand Vihar bus station on March 28 but could not leave as there were not enough buses for the thousands of workers who thronged the place.

The scenes of desperate workers trying to go home were apocalyptic. Hunger, thirst and illness killed a number. Some were beaten by police along the way.

A group of workers in the city of Bareilly in Uttar Pradesh state was sprayed with disinfectants and treated like cattle. In the coastal city of Surat in Gujarat, as well as in India’s financial capital Mumbai, thousands of workers defied the lockdown to attempt to find a way to go to their native places.

Men, women, children – all jostled for food packets at a school in Delhi, while a video from Bihar showed children talking about going hungry and how they survived by eating frogs.

And all the while, India's notorious television media has tried to deflect people's attention from the crisis with its usual communalism.

Stories have been manufactured to connect the spread of the coronavirus to Muslims. Anti-Muslim hatred in Indian media is nothing new, but since the country came under Hindu nationalist rule in 2014, it has poisoned India's social climate.

This hate-filled propaganda has been used by extremist groups to target Muslim vegetable vendors and workers. Hospital services are in a disarray. Doctors are also affected by the disinformation campaign, and in some instances, pregnant Muslim women have been denied treatment.

A hospital in Uttar Pradesh published an advertisement saying it would not treat Muslims. This is sheer chutzpah considering India is keen to export its medical staff and medicines to Muslim countries. Some of India's hospitals make huge money from foreign Muslim patients.

Will the doctor-patient trust survive the prevailing religious hatred? The financial pandemic is going to be bigger. The International Labour Organization estimates that 400 million Indian workers are going to be pushed further into poverty due to the coronavirus disaster. The prediction is dire, as 90% of Indian workers are in the informal work sector.

According to a projection by an Indian trade association, 40 million jobs are at risk between April and September. India will have to control its politics of hate if it hopes to recover from the coronavirus crisis.