How far will Biden be engaged in the Middle East? 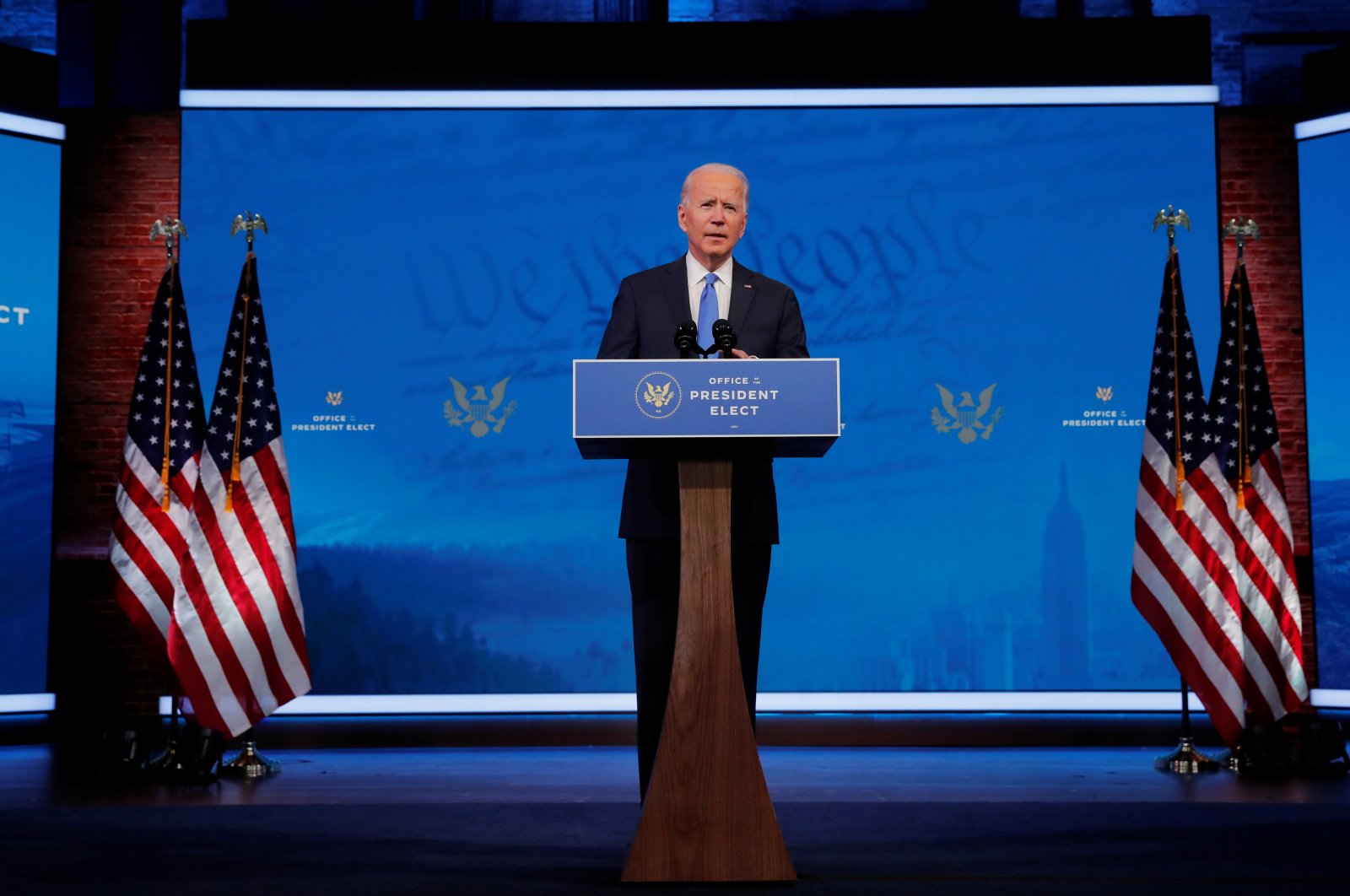 Today our world is going through major changes due to globalization, a relative retreat from the West and the rise of Eastern powers that have begun to challenge America's hegemony on economic, political and military fronts.

World politics have also been shaken up by conflicts in the Middle East and the recent spread of the coronavirus. As the biggest superpower, the U.S. is at the forefront of these critical changes.

Former U.S. Vice President Joe Biden's election as president will have significant implications for the conflict-torn Middle East. In this article, we will discuss how far the Biden administration will engage with the Middle East.

The rise of China and, to a lesser degree, Russia is the U.S.' biggest priority at the moment if it is to once again dominate the world economy and global politics.

Concerns about China's rising economic and military strength go back a few decades in Western circles. This worry can be attributed to the internal logic of globalization and America's inability to formulate a comprehensive and effective strategy to counter China.

For example, former U.S. President Barack Obama’s “Asia pivot” never fully materialized as his administration was distracted by complexities in the Middle East such as the Arab Spring, a nuclear Iran, sectarian conflicts, the Daesh terrorist group, military coups and Israeli actions.

In his electoral discourse, U.S. President Donald Trump in 2016 came across as very hostile when it came to China. Trump's pressure on China had little effect and did not impact the general course of the Chinese economy and politics.

Again, this is because issues in the Middle East kept the Trump administration busy but also can be attributed to his personal, noninstitutional tactics. He wanted to get out of the Middle East in order to be able to face a stronger Asia.

In a sense by giving Israel whatever they wanted, Trump attempted to turn to Asia but failed partially. Even though the Biden administration may not be as hostile toward China as Trump has been, it is likely that Biden will increase the American engagement in Asia, instead of the Middle East.

A militarily assertive Russia is another concern for Biden. Historically, democratic administrations are not keen on Russia, and the Democrats have a grudge against the country for their involvement in Trump's 2016 election victory.

Biden wants to restore confidence in international organizations such as the United Nations and NATO, and his administration will focus on Europe as he will need its support to counter Russia.

The U.S.-EU camp is unhappy with Russia's assertiveness in Crimea, Syria and Libya.

Therefore, the Biden administration will shift some of its attention from the Middle East to Eastern Europe.

As an untraditional politician, Trump was not comfortable with the institutions of traditional American foreign policies, i.e., the Central Intelligence Agency (CIA), the State Department and the Pentagon.

Trump replaced the heads of these institutions and chose to maintain his Middle East policies through his personal contacts or through his son-in-law and adviser Jared Kushner.

Biden will engage with leaders of the Middle East at a more institutional level than Trump. This will make coming to a decision somewhat of a slow process, and reversing certain Trump policies will take some time.

A major change in the U.S. foreign policy toward Iran is possible, just like when Trump reversed Obama's rapprochement with Iran. A total reset seems almost impossible and would require much more time for a deal to be reached, if at all.

Obama reached a deal with Iran after long negotiations using the pressure of "smart sanctions." Trump has already imposed tough sanctions on Iran and continues to do so, seemingly until the end of his term. This gives Biden added leverage to force Iran to accept unfavorable terms since Iran is eager to make a deal with the incoming administration.

Iran also affects U.S. interests in the Gulf region, in Syria, Iraq and to some degree, in Yemen. Obama tolerated Iran’s influence over the countries, remaining more or less silent on its destruction of local democracies.

Biden is less likely to maintain the same approach as the region has already suffered damage. The U.S. has lost ground in the Gulf due to extreme policies that strengthened the Iranian role during the Obama and Trump administrations.

The recent assassination of the Iranian nuclear scientist Mohsen Fakhrizadeh, which was most likely carried out by Israel, shows the Trump administration and Israeli Prime Minister Benjamin Netanyahu may want to sabotage the Biden-Iran rapprochement before it happens, leaving Biden with a continuing war (cold or hot).

Biden is likely to pay less attention to Saudi Arabia under the rule of Crown Prince Mohammed bin Salman (MBS), who is blamed for the murder of the Saudi journalist Jamal Khashoggi.

Aware of this upcoming pressure, MBS seems eager to resolve the Qatar crisis and open a dialog with Turkey. Both problems seem to have arisen as an outcome of the deal MBS made with Kushner and Trump in return for his rise to power as MBS unilaterally chose to have tense relations with both Turkey and Qatar.

Even if Biden wants to overlook the Khashoggi murder, the liberal journalists that support Biden will never let the case go. He will be urged to follow the case as well as the Yemen crisis where Saudi Arabia is to be blamed for the suffering.

The U.S. relations with the rest of the Gulf countries are expected to remain more or less the same as with Trump. It is clear the U.S. does not need the Gulf's oil and gas as it has started to produce its own recently.

We can expect to see the Biden effect more clearly in the Israel-Palestine conflict. Under Trump, Netanyahu's wishes were unilaterally granted, but it seems American discourse will make a more legalistic turn. No one expects Biden to punish Israel for Trump’s gifts, but the conflict will remain unresolved, as it is.

The Biden administration can force Israel to the bargaining table without giving any significant concession to save face against international criticisms. Similar calls will probably be made to respect international law.

More importantly, Biden might encourage other Arab countries to normalize relations with Israel, but he will not force or blackmail them as Trump did. Without Trump, no Arab countries would normalize ties with Israel without the promise of concrete gain from the normalization.

In one respect, Biden and incoming Secretary of State Antony Blinken can make a difference in the future of Arab democracies. Obama disappointed the democratic aspirations of Arab societies by allowing military coups, civil wars and bloody suppression.

Biden has a chance to reverse this in Syria, Libya and even Egypt. Trump called Abdel-Fattah el-Sissi, the authoritarian leader of Egypt, his “favorite dictator” but Biden may keep a more careful eye on him.

The Bashar Assad regime of Syria and putschist Gen. Khalifa Haftar of Libya will not be as comfortable with the Biden administration. The anti-democracy camp claims they are fighting “political Islam” (or the Muslim Brotherhood) meanwhile supporting more radical groups in Yemen and Libya. Unlike with Trump, the group will find it more difficult to ban the Muslim Brotherhood in the U.S.

We can expect Biden to deliver a more forceful impact on the Syrian conflict that has now dragged on for a decade. The country is torn between the north, the east and the rest of the country as Turkey, the PKK/YPG terrorist group and the Assad regime control the areas respectively.

Biden can affect the Syrian scene by pushing forward the Geneva process to support the Syrian democratic transition. Similarly, he can and must end policies dividing Syria by stopping the PKK/YPG.

Obama chose to arm the PKK as an excuse to fight the notorious Daesh terror group while Trump tried to leave Syria for good. However, fundamental American foreign policy did oppose the change.

If Biden chooses to support a democratic transition in Syria where Shiite, Sunni and Kurdish people can live peacefully, it would be a major achievement.

In brief, the Biden administration will find the Middle East has changed in the last four years. From Trump’s reversal of the nuclear deal with Iran and the rise of MBS to power, to the Qatar embargo and the situations in Syria and Libya, the landscape is now quite different.

While Biden has been a member of the U.S. establishment before, he cannot revert to Obama's Middle East policies. It is clear Biden will need to address the political wounds suffered at home due to contested elections and ensuing polarization.

He has to pay more attention to the U.S. health care system and to the economy – both of which have been hit hard by the COVID-19 pandemic.

Like every American president, Biden must take into consideration the legacy he is to leave behind for future generations. He could have a legacy of bringing peace to the Middle East ensuring stability, democracy, security and prosperity, if he chooses to do so, but it seems unlikely.