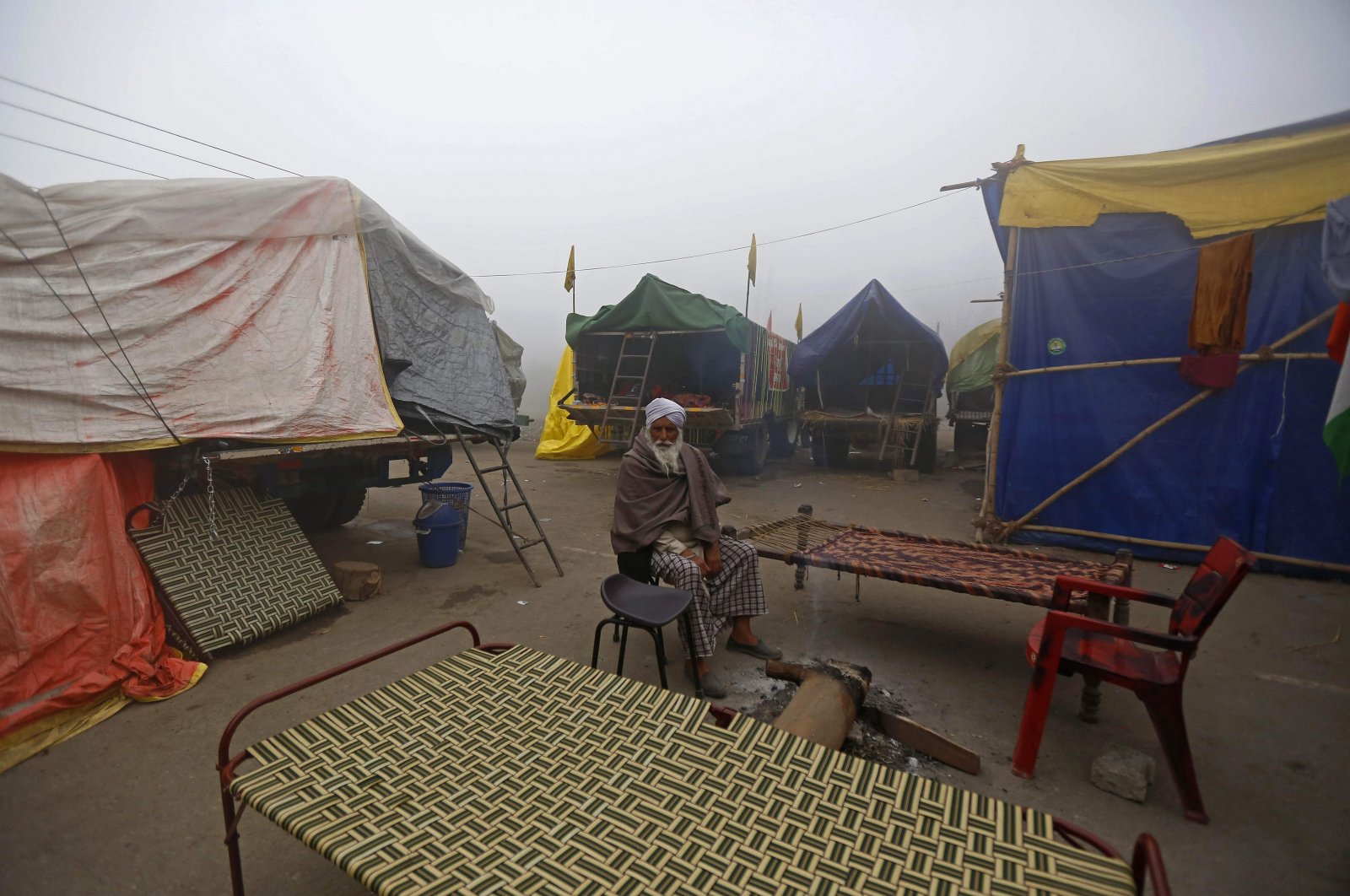 A farmer sits along a blocked highway as farmers continue to protest against the central government's recent agricultural reforms, Singhu, India, Jan. 29, 2021. (AFP Photo)
by Shakir Husain Feb 04, 2021 12:05 am
RECOMMENDED

Scores of protesting farmers in India have died due to the cold weather since pitching their tents in the thousands on the outskirts of Delhi in November after police prevented them from entering the capital city to hold a demonstration against the federal government's three new agricultural laws.

Their ranks swelled over the weeks despite the harsh winter and tough living conditions at the protest sites. Many elderly protestors have joined the movement, worried for their children's future if the laws are not repealed. Meanwhile, the Hindu nationalist Bharatiya Janata Party (BJP) government in New Delhi says the market-oriented laws are needed to reform the agriculture sector.

Looking at the size of the protests and growing resentment in the country's agricultural regions, in particular, the states of Punjab and Haryana, and the western region of Uttar Pradesh, it is evident that Indian Prime Minister Narendra Modi's administration miscalculated the likely public reaction when enacting the new measures last year. It should have been clear to the administration that the atmosphere in Punjab had turned hostile.

Federal Minister Harsimrat Kaur Badal resigned in protest against the laws passed in September. Her party Shiromani Akali Dal (SAD), a close BJP ally, could not afford to overlook the angry farmers in its Punjab base.

Demonstrations and transport blockades began in Punjab months ago, and the state has been the vanguard of the movement, but Haryana and the farming belt of western Uttar Pradesh, both bordering the Indian capital, are central to the ferment.

Other agriculturally rich regions, notably Maharashtra and Karnataka, are also unhappy with the laws but, for the moment, Delhi's biggest inconvenience is happening on its borders. A leading business association in December estimated daily losses of $475 million in north India due to the disruption caused by the protests.

Supporters of the laws argue that farmers will be able to sell their produce anywhere in India at market rates and through online commerce without having to deal with state barriers. Critics say most farmers in India are smallholders of land and lack the logistics and financial resources to benefit from the provisions that may look attractive in theory.

Farm unions want the existing system of government-regulated "mandis," or wholesale markets, to stay because cultivators selling their surplus produce are guaranteed what is known as the "minimum support price" (MSP). Farmers in Punjab and Haryana are well-off compared with their counterparts in many other parts. They benefit from the safety net of physical market yards and government procurement policies.

The MSP mechanism guarantees a certain gain above the cost of cultivation irrespective of commodity prices in the open market. However, farmers are not bound to sell commodities at MSP to government agencies if they receive a better price elsewhere.

At risk of becoming beggars

According to a Ministry of Agriculture statement in February last year, there were 6,946 regulated wholesale markets working under the State Agricultural Produce Market Committee (APMC) Act. Agricultural marketing falls under state jurisdiction in India's division of powers between the central government and states.

Yadav fears the new federal laws will turn farmers into "beggars." Punjab's farmers surely understand the implications as they hire agricultural laborers from Bihar during the harvest season.

The Modi government is convinced its reforms "herald a new era of market freedom." It said in an annual economic report on Jan. 29: "The three agricultural reform legislations are designed and intended primarily for the benefit of small and marginal farmers which constitute around 85 per cent of the total number of farmers and are the biggest sufferer of the regressive APMC regulated market regime."

It is remarkable that the government views the wholesale market system as "regressive" whereas the protesting farmers see nothing but their ruin in its removal.

Commodity procurement by government agencies at MSP directly from farmers has been part of India's food security. It is needed to provide basic items such as wheat and rice at subsidized prices to hundreds of millions. It offers a buffer in times of calamities or crop failures.

During the national lockdown to contain the coronavirus, the Food Corporation of India last year moved huge quantities of grains to maintain critical supplies from its bulging granaries. Haryana and Punjab's farmers take pride in their contributions to the granaries. Their political clout is obvious.

Punjab's prosperity goes beyond its traditional agriculture power and entrepreneurship. The Punjabi community living in many countries, in particular, Canada and Britain, is a source of remittances and cultural exchanges with the world. Punjabis fear the farm laws pose a threat to their prosperity, dignity and livelihoods by demolishing a key pillar of their economy. They are not convinced when the government says that the laws won't take away the MSP system.

Farmers fear that food trading companies, whether owned by BJP cronies or not, would be able to dictate unfavorable prices and business terms if allowed to deal directly with cultivators.

Many in the farming sector in India are suffering, with thousands committing suicide every year out of desperation from being in debt or losing crops. Since companies and trading cartels do not seem to feel obliged to provide farmers a remunerative price, the sentiment will only grow.

Dozens of farmers' unions are participating in the ongoing protests and have drawn support from various political parties and activist groups opposed to giving a greater role to big businesses in the agriculture sector.

The BJP's calculation in introducing the laws may have been based on the fact that more than 80% of farmers own just one or two hectares of land. They did not expect the small cultivators to pose such a great challenge to the change. But the Punjab, Haryana and western Uttar Pradesh's farmers do not lack resources or mass mobilization skills.

Since Modi's party rules Haryana and Uttar Pradesh, it may have considered itself safe in the two regions. Having no capacity for skullduggery, the BJP would have tried to keep the Punjab unrest within the state.

Hindu nationalists have clumsily used Twitter and the notorious television media to discredit the farmer movement as driven by "Khalistanis," an absurd reference to Sikh separatism.

But the protests are broad-based enough for such persuasion to work. The government has been forced into negotiations but several meetings with farmer unions have produced no agreement.

Rolling back the measures would tantamount to surrender for the BJP, which thrives on its cleverly projected strongman image.

The farm unions, meanwhile, are prepared to intensify their movement. With the peak of north Indian winter over, at least there will be fewer weather-related deaths among those camping at Delhi's doorstep.