Thousands of India farmers clash with police over agriculture law 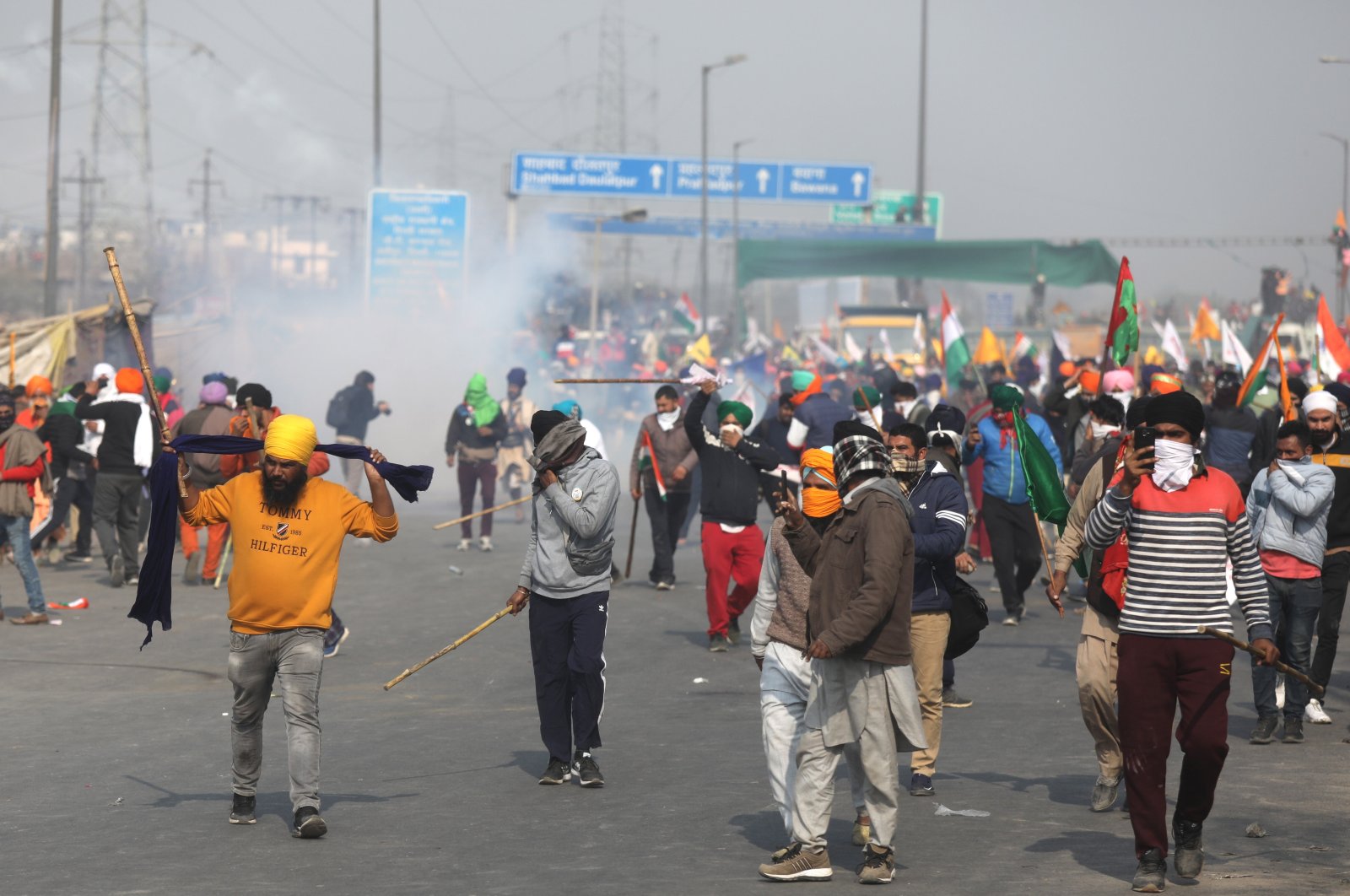 Police use tear gas against protestors during the ongoing farmers' protest of the new agricultural laws, on the outskirts of New Delhi, India, Jan. 26, 2021. (EPA Photo)
by Agencies Jan 26, 2021 11:27 am
RECOMMENDED

Angry over the government's agriculture reform, thousands of Indian farmers Tuesday held large protests, driving their tractors through a police barricade to enter the country's capital New Delhi as the nation marked Republic Day with a giant military parade.

Police had earlier sealed most entrances to the city with containers and trucks but had to use tear gas and batons as the farmers broke through.

Some protesters reached a major intersection 3 kilometers (1.8 miles) from where Prime Minister Narendra Modi and other government leaders watched tanks and troops parade past and fighter jets fly overhead.

Modi waved to crowds and was driven back to his residence before any personal confrontation with the farmers, the biggest challenge his Hindu nationalist government has faced in its six years in power.

Tens of thousands of farmers have camped on the outskirts of the capital since November, protesting against new laws that deregulate produce markets.

More than 5,000 gathered at the Singhu border point alone, a report by the broadcaster NDTV said. There were scenes of chaos at the Singhu border, where huge groups of farmers on foot marched through with flags. Many others drove in on tractors after the barricades were cleared. Police resorted to baton-charging and firing tear gas shells to disperse crowds at some locations in the city, footage on news channels showed.

Hundreds of protesting farmers managed to enter the historic Red Fort in the capital and hoist yellow flags on the dome as one person was killed when the police used batons and fired tear gas shells to disperse them. The protestors were still around the Red Fort till the filing of this report on Tuesday evening.

According to local private broadcaster NDTV, police claimed that the farmer died in a road accident, not during the demonstration. Farmers, however, said one protester got a bullet and died. The police used batons and fired tear gas shells to disperse the demonstrators on their way to the Red Fort where the Republic Day was celebrated. Soon after the Republic Day celebrations, hundreds of demonstrators managed to enter the fort and hoist the yellow flag, the holy flag of the Sikh faith.

Union leaders say the laws will allow private Indian conglomerates to take over the agriculture industry – the rock bed of the economy – and replace a system of purchases by the government at guaranteed prices.

Authorities had agreed to let the farmers stage a tractor rally as long as they waited for the official Republic Day parade to finish. But flag-waving protesters on at least four major arteries climbed over or just pushed aside the barricades and concrete blocks and pressed on into the city.

"We are going to show the government that we mean business," protester Nareesh Singh was quoted as saying by Agence France-Presse (AFP) as he revved up his tractor and drove into a cloud of tear gas

Satnam Singh Pannu, head of one of the main farmer committees, told AFP the protesters have enough supplies to keep their Delhi camps going for a year if necessary, and that there was "massive popular support" for the campaign.

On one road, people climbed onto rooftops and threw petals on the tractor convoys. Elsewhere people cheered and applauded as the farmers went past waving Indian flags and blowing horns.

The Republic Day ceremonies went ahead despite security concerns. Police manned barricades at intersections around the center of the city, while soldiers with machine guns patrolled on many metro trains.

The parade – which featured Rafale jets newly bought from France – was cut back this year because of the coronavirus pandemic, with the number of spectators on the Rajpath boulevard reduced from 125,000 to 25,000.

Modi sent out Twitter greetings for the national holiday without mentioning the farmers.

The government says the reforms will boost rural incomes and that the farmers have been manipulated by opposition parties. Ten rounds of talks between farm unions and ministers have failed to break the deadlock.

The farmers have demanded the government repeal the laws, but the administration has only offered to delay implementation for 18 months. Smaller farmer demonstrations were held in Mumbai and Bangalore.

The farmers' leaders said a new mass rally would be held on Feb. 1 when the government announces its annual budget plans. The occasion marks the day the Constitution of India came into effect in 1950.