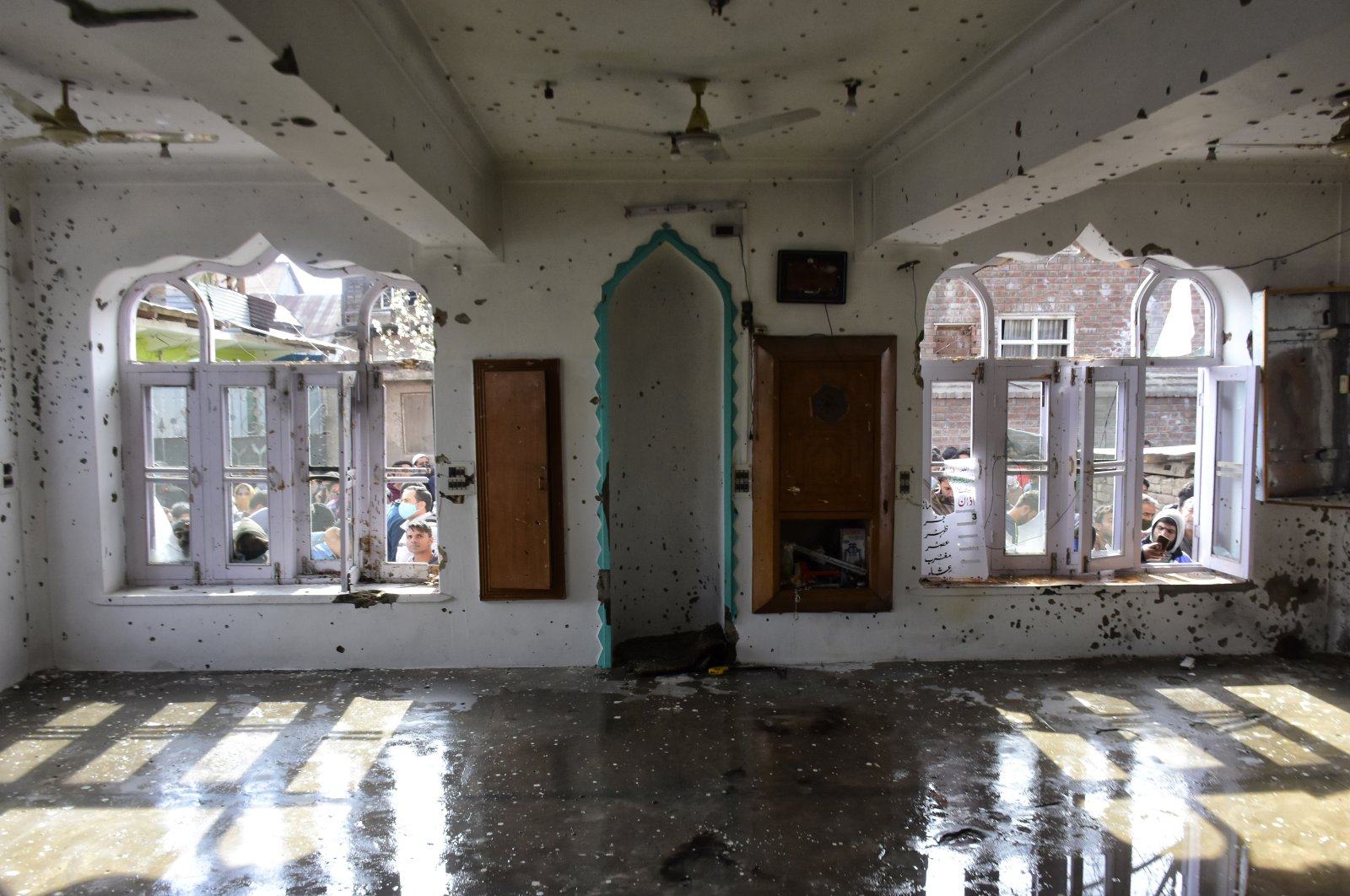 The interior of a mosque damaged in a clash between Indian forces and Kashmiri protestors, in the Shopian district of Indian-occupied Kashmir, April 9, 2021. (Photo by Getty Images)
by Nasir Qadri Apr 16, 2021 12:05 am
RECOMMENDED

After the killing of Burhan Wani, a young commander and a socially popular figure in the Indian-occupied Jammu and Kashmir, the struggle for the right to self-determination in the disputed Himalayan valley changed drastically.

Wani was shot dead by Indian occupying forces on July 8, 2016, in southern Kashmir. The killing sparked an uprising, which continued for the next six months but its after-effects are still felt today, which were exacerbated by India’s annexation of Kashmir on Aug. 5, 2019, when New Delhi scrapped the Muslim-majority region’s special status.

To counter the impact of the massive anti-India civil uprising, a major shift in the movement that flared up in 1989, the Indian occupational forces launched "Operation All-Out" in 2017 and a blueprint containing a list of 258 local and foreign anti-Indian armed fighters was prepared.

In the same year, over 200 rebels were killed in “Operation All-Out” and over 108 civilians were also shot dead.

Many of these civilians were out at the gunfight sites to protest against the Cordon and Search Operation (CASO) launched by Indian occupational forces.

According to the Indian Interior Ministry, there was a 167% increase in civilian killings in 2017 compared to 2015 and a 6.21% jump in the number of violent incidents compared to 2016. The number of militants killed went up by 42%.

In the years 2015-2020, over 592 civilians and 1,125 pro-freedom armed rebels were been killed by Indian occupational forces in numerous Indian military operations.

The continuous killings have only led to more local youth joining the armed liberation movement, often by snatching weapons from on-duty armed forces.

Characterization of the conflict

The disputed status of Kashmir is the source of international armed conflict between India and Pakistan, which are both High Contracting Parties under the 1949 Geneva Convention.

Besides, Kashmiris are struggling for the right to self-determination as guaranteed by the United Nations for the last seven decades.

The Indian government tries to downplay the conflict, despite the fact that thousands of Kashmiris have been killed, tortured, raped, arbitrarily detained, subjected to enforced disappearance and their residential properties damaged.

The U.N. Special Rapporteur on Terrorism and Human Rights points to the protection of occupied people striving for self-determination as combatants under the international humanitarian law (IHL) and the operation carried out on both sides should be judged based on the IHL principles.

Ever since Operation All-Out was launched by the Indian military establishment apparently against combatants, the valley has witnessed an ugly phase of human rights violations against the civilian population.

The U.N. office of the High Commissioner for Human Rights (OHCHR) released two reports in 2018 and 2019 accusing India of grave human rights violations in Kashmir and called for the formation of a commission of inquiry into the allegations.

The report criticized the special legal provisions for the Indian forces in Kashmir and called for the repeal of the controversial black law known as the Armed Forces Special Powers Act (AFSPA), which has made accountability of Indian forces for human rights violations in Kashmir “literally nonexistent.”

According to data compiled in the last three years, Indian occupational forces have clashed with rebels in different areas, leading to “extrajudicial killings,” severe injuries and destruction of civilian property.

A total of 354 encounters took place in Kashmir. At least 782 operations in total were conducted in Kashmir, which led to multiple human rights violations of the civilian population, including harassment, molestation, detention and the use of excessive and indiscriminate force. During these operations, vandalism and destruction of 802 civilian properties were reported.

Counterinsurgency doctrine stresses that the “use of lethal force must respect the legal principles of military necessity, distinction, (and) proportionality.”

India’s "proactive" and "offensive" doctrine in Kashmir bereft any adherence to the principle of the IHL.

Indian occupational forces resort to excessive use of force during counterinsurgency operations against the civilian population and perpetrate war crimes and crimes against humanity. The OHCHR reports also outline similar crimes.

The 1 million-strong Indian occupational forces have been criticized for using “disproportionate force” in their bid to take out armed rebels, wielding lightweight weapons such as the AK-47.

India has ratified all four Geneva Conventions and has also incorporated the Geneva Convention Act 1960 into its domestic legislation. The basic rule in Article 48 that leads Part IV on "civilian population" and Section I providing for "general protection against effects of hostilities."

It is an established norm that all armed conflicts must be initiated, conducted and ended proportionately. The number of factors that determine proportionately include the amount of force used, the temporal aspect of the use of force, the methods employed and the objectives established, to name a few. The primary focus is on limiting the harm to civilians as well as to combatants.

The global community unanimously agrees with the humanitarian contentions in the principle of proportionality. In the case of Iranian oil platforms, the International Court of Justice (ICJ) rejects the U.S. claim of self-defense against Iran and held that the targets of opportunity, which are not military objectives, do not pass the test of proportionality as required by international law.

In the Nuclear Weapons Advisory case, the ICJ upheld that the notion of proportionality is comparable to other humanitarian laws, where the laws of the conduct of war mandate its use within certain constraints to curtail unnecessary suffering and devastation.