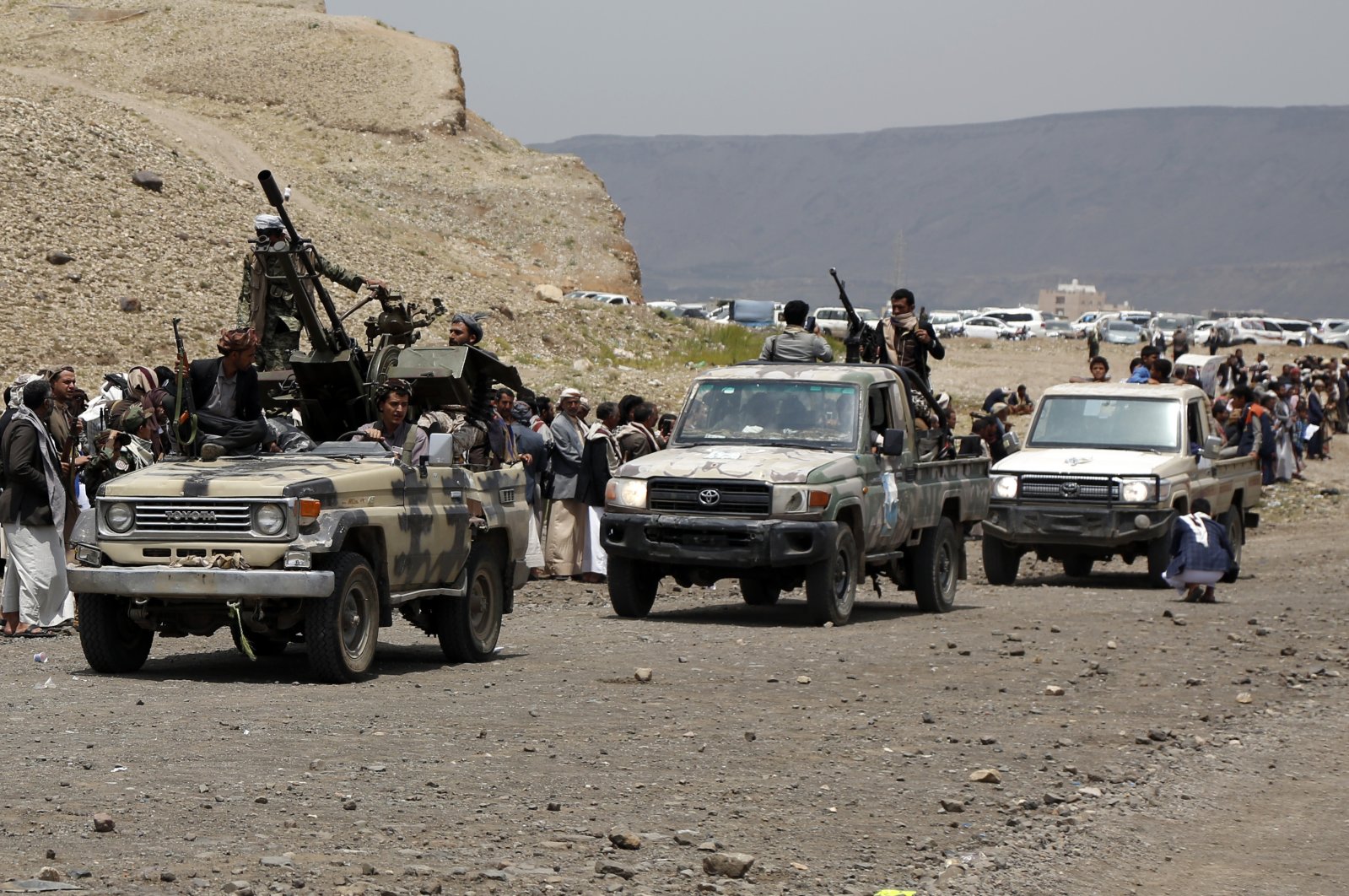 Tribespeople loyal to the Houthis ride trucks mounted with machine guns during an armed tribal gathering on the outskirts of Sanaa, Yemen, July 8, 2020. (Photo by Getty Images)
by Giorgio Cafiero - Connor Bryant Apr 03, 2021 12:05 am
RECOMMENDED

On March 22, Saudi Arabia announced its support for a United Nations-backed cease-fire in Yemen. Riyadh’s top diplomat Prince Faisal bin Farhan stated that Riyadh was prepared to permit a reopening of Sanaa International Airport for some flights and let certain goods in through Hodeidah’s port if the dominant Houthi militia Ansar Allah complied with a U.N.-overseen cease-fire.

Additionally, Riyadh’s offer called for “depositing customs and tax revenues for ships carrying oil derivatives to the port of Hodeidah in the joint account of the Central Bank of Yemen.”

The Kingdom announces an initiative to end the Yemeni crisis and reach a comprehensive political resolution pic.twitter.com/jhltPe7NIB

The Houthis, however, quickly rejected Saudi Arabia’s latest offer because it was “nothing new” according to the rebels.

The Iranian government responded gleefully to Riyadh’s offer. Tehran was quick to portray Saudi Arabia’s announcement as both bogus as well as another sign of Riyadh’s weakness as the oil-rich kingdom begins its seventh year of military operations against Iran-allied Ansar Allah.

“Tehran believes that the Saudi initiative is nothing but a game of innocent exit facing U.S. pressure,” explained Omar Munassar, an independent Istanbul-based Yemeni researcher with areas of expertise in the Arabian Peninsula.

Officially, the Iranian Foreign Ministry responded to the Saudi offer by affirming Tehran’s support for “any peace plan based on an end to aggression, nationwide truce, end to the occupation, removal of economic blockade, starting political talks and finally ceding (political) control to Yemenis.”

It is astonishing how much Iran has exploited the Yemeni crisis. Maysam Behravesh, a top Iran expert who is a research associate at Clingendael, the Netherlands Institute of International Relations, explained how Yemen factors into Iran’s “strategic depth” policy in the Middle East.

“Strategic ‘depth’ (omgh), also called 'backup' or 'buttress' (aghabeh) in the Iranian security literature, is understood as the capability to take the fight as close to the enemy territory as possible and thus hold the defensive advantage to strike deep in the event of conflict.”

As Behravesh later wrote, “The policy derives a good deal of its appeal from a pro-underdog religious ideology and identity, and is mainly used as a discursive and political tool to boost and back up what has gradually transformed into a security provision and power projection strategy.”

From Iran’s standpoint, its policies in Yemen since 2015 have served it well. Today, the Houthis (and by extension Iran) have certainly taken the upper hand in Yemen’s war, underscored by Ansar Allah’s control of almost all of northern Yemen.

Iran is currently quite confident about the situation in the war-torn Arabian country and sees easy ways to capitalize on either a continuation of warfare or a diplomatic settlement.

Put simply, more warfare will offer Tehran a chance to continue making the Saudis bleed and suffer from increasingly sophisticated Houthi attacks. This is all with a relatively tiny bill for Iran to foot.

“If Saudi Arabia and the U.S. maintain their view of recent years that Iran should play zero role in Yemen and the Houthis must be militarily defeated at all costs, Iran will continue its own interference in Yemen,” said the National Iranian American Council’s Sina Toossi. “Given the direction the war is heading in, this will have far greater costs for Saudi Arabia.”

Indeed, financially speaking, the costs of intervention in Yemen have been much higher for Riyadh than Tehran.

In 2018, Dr. Thomas Juneau, an assistant professor at the University of Ottawa, estimated that annually the Iranians likely spend some amount of money in the tens of millions per year on the Houthis – almost not even comparable to the tens of billions which Riyadh has spent each year on this war.

8. Conclusion: Saudi Arabia spends $tens billions per year in Yemen; Iran spends an unknown amount but probably in the $tens of millions per year. For that low price, Iran helps getting Saudi stuck in a costly quagmire. For Iran, this is a good return on a limited investment.

“The war is a very expensive burden for the kingdom, a humanitarian catastrophe for Yemen, and a geostrategic advantage for Iran” is how the Brookings Intelligence Project's Bruce Riedel put it.

"Soft power" and the war of narratives matter a lot too. Riyadh’s international reputation has suffered immensely from Yemen’s humanitarian disasters.

Although Tehran and its Houthi clients have contributed to Yemen’s problems and human suffering, Saudi Arabia has lost the publicity war on a global level. Iran has played the media war to its advantage.

At the same time, a diplomatic settlement could easily advance Iran’s interests too. A scenario whereby a power-sharing agreement is signed would practically guarantee a pro-Iran Yemeni faction some degree of power in a post-conflict settlement and further institutionalize Tehran’s influence in Yemen.

“Tehran, as the main supporter of the group, has secured sufficient influence in any prospective political settlement to the conflict, which will enable it to strengthen its policy in the region,” said Abobakr Alfaqeeh, a Yemeni freelance journalist.

According to what one anonymous Iranian intelligence analyst affiliated with the Islamic Revolutionary Guards Corps said in June 2019, “the Saudi and Emirati complicity in aiding and abetting tough U.S. sanctions against Iran is, to some extent, driving this surge in Houthi attacks.”

Some experts believe that if Riyadh and Washington would ease their anti-Iranian positions and decrease regional brinkmanship, Yemen would possibly be the first Arab country where Tehran ends, or at least significantly decreases, its “malign” conduct.

In Yemen, at least compared to Iraq, Syria, and Lebanon, the Iranians have invested little and their stakes are much lower. “Iran does not have core security interests in Yemen,” explained Toossi.

“The degree and form of Iran’s interference in Yemen hinges on the status of its relations with Saudi Arabia, and by extension the United States.”

The conflict has given Tehran opportunities for its Yemeni client to increase attacks on Saudi Arabia’s critical oil facilities.

Such actions put significant pressure on both Riyadh and Washington, which ultimately functions as the Saudi kingdom’s security guarantor.

If Iran’s relations with the U.S. and some of its regional allies/partners remain hostile, Tehran will certainly continue viewing Yemen as a “forward base” for deterring and retaliating against Saudi Arabia, the United Arab Emirates (UAE) and possibly Israel too.

Ultimately, it is very safe to assume that so long as U.S. President Joe Biden continues his predecessor’s policies of “maximum pressure” targeting Iran, Tehran will make sure that no Saudi or American-friendly political order is easily established in Yemen.