Is Ethiopia on the verge of state collapse? 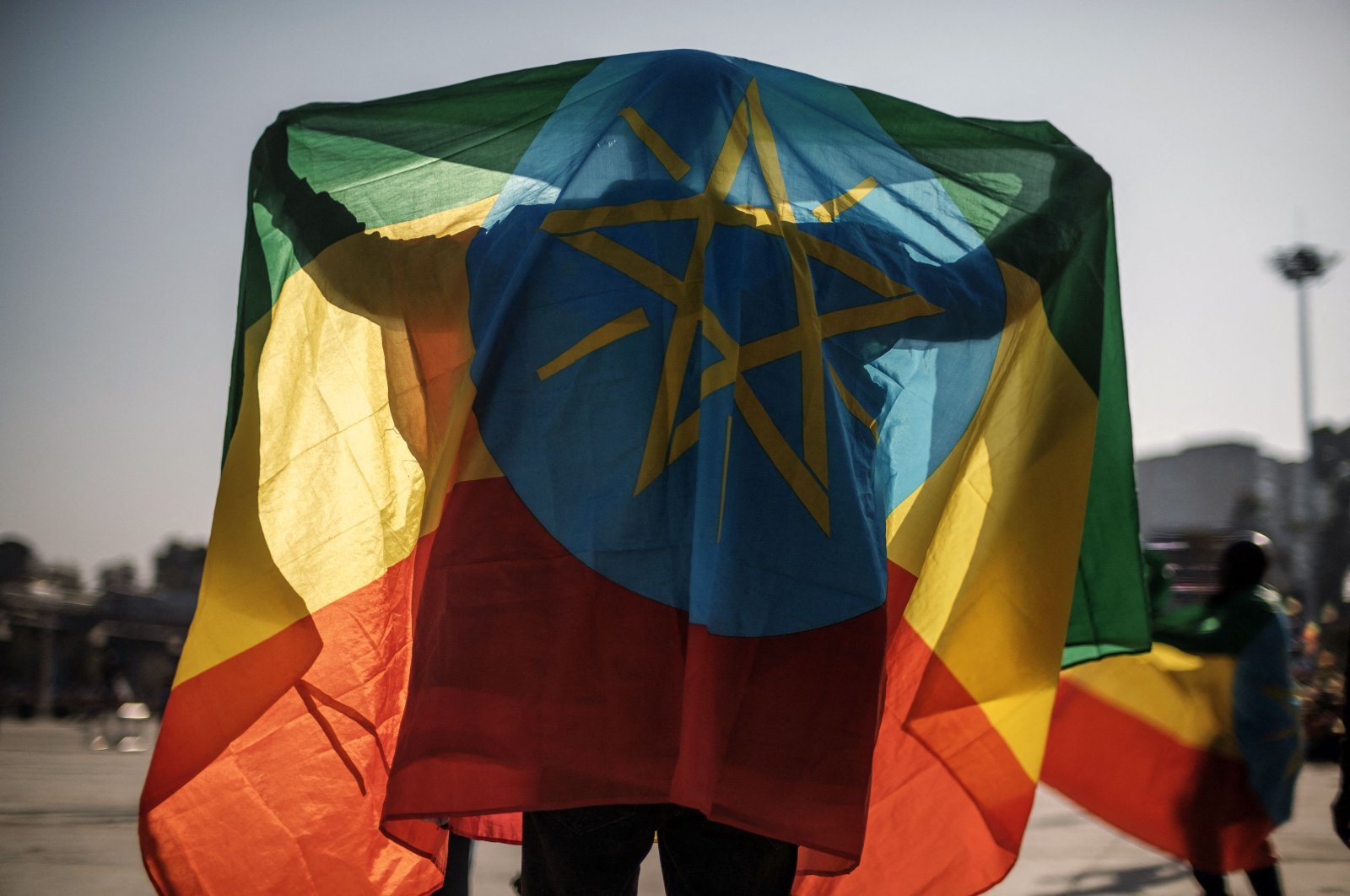 A man covers himself with an Ethiopian flag during a rally in support of the national defense forces, Addis Ababa, Ethiopia, Nov. 7, 2021. (AFP Photo)
by Abdirashid Diriye Kalmoy Nov 11, 2021 12:05 am

On Nov. 2, the Ethiopian government imposed a nationwide state of emergency as rebels from the northern Tigray state made military gains in the ongoing conflict that has engulfed Africa’s second most populous nation. The Tigray People’s Liberation Front (TPLF) – a party that ruled Ethiopia for three decades with an iron fist and now declared a terrorist entity – had made substantial military gains in the war’s front lines and poses a threat to the capital Addis Ababa, which is also the headquarters of the African Union (AU).

In addition, the city administration of Addis Ababa urged its citizens to register all weapons and arms in their possession and be ready to defend the city from the looming threats posed by the TPLF and its allies: primarily the Oromo Liberation Army (OLA). With these developments, Ethiopia’s Tigray war has entered a new phase since it started on Nov. 4, 2020.

Something has broken in Ethiopia since the war started. In a United Nations human rights report published recently, all sides in the conflict were accused of committing heinous crimes against humanity in a war that has become an emblem of extreme brutality and insensitivity – with the Tigray region being its epicenter.

With the TPLF and OLA rebels approximately 300 kilometers (some 186 miles) from the nation’s capital Addis Ababa, is Ethiopia on the verge of a state collapse? What are the possible scenarios in this brutal civil war given the highly charged ethnic nationalism and rhetoric, and the highly contested political stakes involved?

Today, in Ethiopia, there are deeply entrenched political positions that are irreconcilable. They are based on narratives of ethnic grievances and recognition on one side and a supposedly glorious historical past that needs to be safeguarded and protected. Consequently, simply put in Weberian ideal-types, on the one side you have Somalis, Oromos, Tigrayans, Afaris and others yearning for recognition, freedom and autonomy, and the Amharas hell-bent on protecting Ethiopia’s supposedly glorious imperial past and history. Hence, contemporary Ethiopian politics mainly revolves around supporters of decentralization and those calling for recentralization, people who praise the historical past, and people who view the past with pain, stigma and trauma.

Observers and analysts of Ethiopian politics would also argue that the country has a long historical legacy of zero-sum politics – where negotiations, compromises or retreats in the political sphere often lead to doom and demise. Ethiopia is a country where (brutal) power shapes and molds politics, history and society. The country had dozens of rebel groups – throughout its modern history – all challenging the central government and seeking independence for their specific ethnic groups.

Moreover, Ethiopia’s recent political history – the Derg era, the TPLF-led post-1991 era and the current era of Prime Minister Abiy Ahmed Ali – indicates that a Hobbesian state mentality is perverse among its rulers. There is a cost to being not ruthless with your political adversaries or rivals in Ethiopia. Hence, state-orchestrated violence, famines, disappearances and arbitrary imprisonments have become normalized in Ethiopia’s political contestations. The current war in Tigray is just one chapter in a long history of political brutality.

A glimpse into the prison accounts and narratives of prisoners at Jail Ogaden, where mostly Somali political prisoners were held indefinitely would underline Ethiopia's zero-sum political landscape.

A state without a nation

Another challenge – but also an advantage, if viewed differently – that Ethiopia failed to overcome is its cultural, religious and ethnic diversity. Like many post-colonial nation-states, Ethiopia also failed to solve the ethnic-tribal diversity puzzle. Ethiopia’s history was essentially equalized with the Amharan imperial history, consequently marginalizing the historical legacies and sense of identity of the Cushitic and Nilotic peoples and many others. Subsequent governments have failed to accommodate the diverse historical legacies and ethnic nationalities' sense of identity and communal self-esteem.

Has Ethiopia become a strong and powerful state without molding a nation? Ethnic nationalism and sentiments are so entrenched on all sides that Ethiopia seems unable to survive in this current war in a complete form.

Diverse historical legacies, linguistic and cultural differences and distinct visions for the state – coupled with long-held grievances or superiority complexes in some segments of society – have essentially pulled Ethiopia’s peoples into different senses of belonging and identities. The zero-sum real politic in the country also engendered mutually exclusive identities, agendas and ethnic interests which became irreconcilable.

Ever since the current war started, Ethiopia as a nation received a damaging blow to its politics. The fabric that held the people together was torn in unimaginable ways. The nationalistic languages on all sides, the rhetoric, the genocidal metaphors employed by all politicians and the saturated social media platforms have dealt a blow to Ethiopia’s sense of unity.

The current situation in Ethiopia is fluctuating on daily basis. However, with the rebels making military gains on the ground, there could be three possible scenarios.

First, the government is mobilizing every capable male citizen to join the war and halt the advance of the rebels. This could indeed give the current government a lifeline and hence push back the rebels and change the military dynamics on the ground. Nevertheless, repelling the rebels from the capital city will not translate to a peaceful Ethiopia. In a war with approximately 1 million combatants and 150,000 casualties, Ethiopia will still face dire security and stability threats. This could lead to a protracted long war as in the case of Syria.

The second possibility is that the rebels capture Addis Ababa and oust the current government from power. This is very likely given their recent military gains and the swiftness in which they broke through the Ethiopian army’s defensive front lines. Still, this scenario would not bring peace and stability in Ethiopia: The TPLF coming back to power in Addis Ababa would be violently rejected by the whole Amhara region and this would not also be palatable for the majority of Oromos and Somalis. The country could turn into an ungovernable land as in the case of 1990s Somalia where different rebel groups turned on each other after ousting the government. In this case, the TPLF will have to compromise but I doubt this will happen given their military victory and sense of vindication in the war. Ethiopia will still be unstable and vulnerable.

In the third scenario, the rebels would feel they have weakened the government militarily and open a humanitarian corridor for Tigray, and hence halt their advance to the capital. With a weakened central government, the Tigray region could chart its own secession and independence, and this could create a domino effect in the whole country. This would lead to an inevitable balkanization of Ethiopia along ethnic lines.

Two prominent scholars Nic Cheeseman and Yohannes Woldemariam asked: Can Ethiopia survive this war? The current war has bruised and broken the social-communal bonds in Ethiopia beyond repair. Only a miraculously founded democratic dispensation based on a broad consensus among its people based on freedoms, liberties, dignity and ultimate peace can save Ethiopia. And that seems to be lost in the current political climate and mood in the country.