Kashmiris pay tribute to their heroes 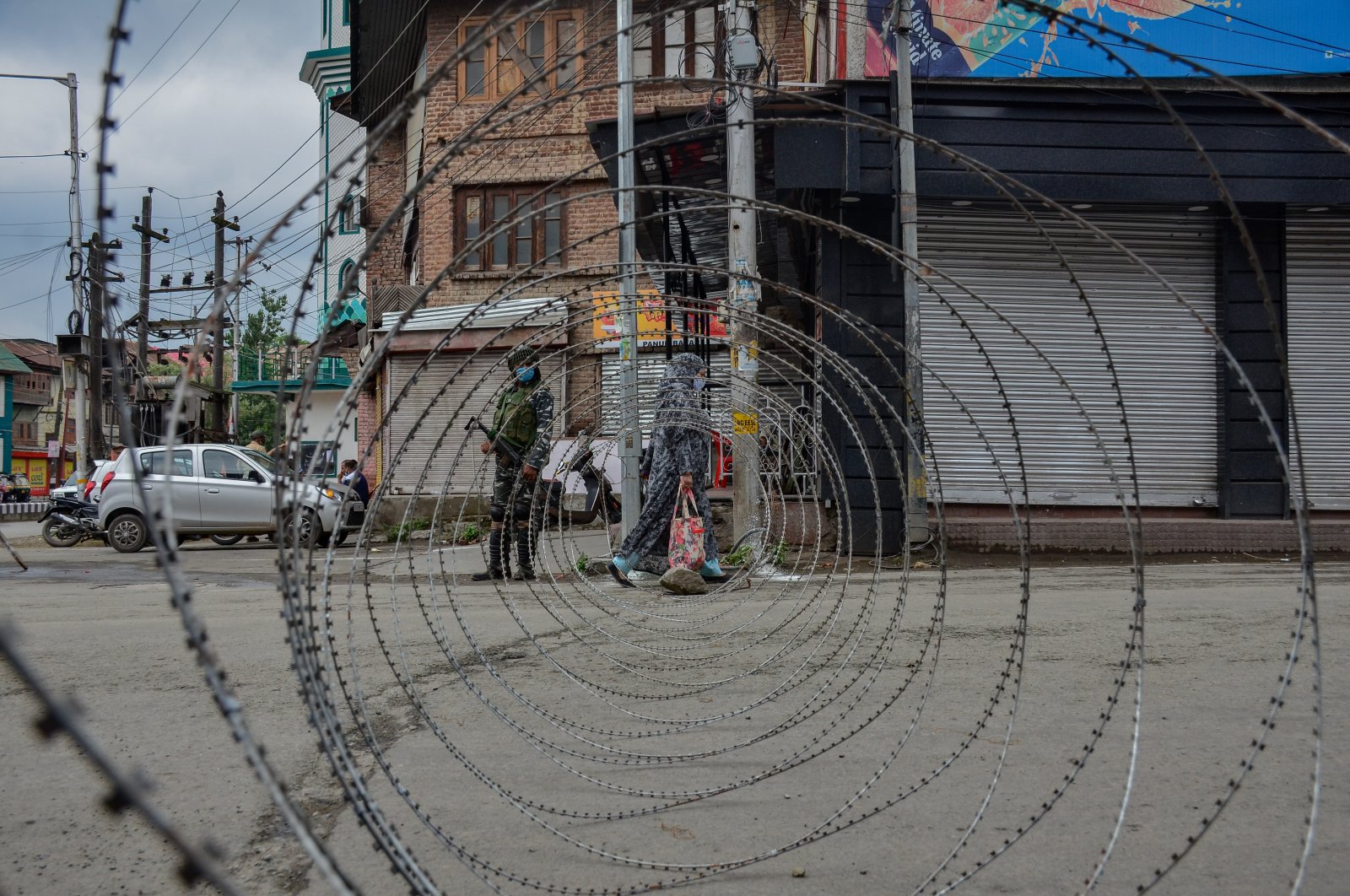 A woman walks past a concertina barricade erected by the Indian forces during restrictions imposed on the eve of Martyrs Day in old city of Srinagar, Indian-controlled Kashmir, July 13, 2021. (Photo by Getty Images)
by Ghulam Nabi Fai Jul 16, 2021 12:05 am

If India truly believes in democracy, granting Kashmiris the right to self-determination would be the right thing to do

The people of Kashmir are making an earnest appeal to humanity at large, and the world powers in particular, to pay heed to the long-standing wishes and aspirations of the Kashmiri people as they observe the 90th anniversary of Martyrs Day of July 13, 1931.

It was on the tragic day of July 13, 1931, that the foreign occupying Dogra troops shot 22 Kashmiris dead, in cold blood, in front of Srinagar Central Jail.

July 13 is forever etched in the collective minds of the Kashmiri people as the day when the freedom movement was greeted with bullets.

Since that ominous day, Kashmiris have organized peaceful protests, seminars and conferences throughout the world. They believe that their suffering has not ended despite the end of the despotic Dogra dynasty rule.

The fate of Kashmiris has changed for the worse, as it has been replaced by tyrannies of successive Indian regimes under a facade of democracy. But, the tyranny in Kashmir under the Hindutva nationalists has reached a new and unprecedented level of inhumanity.

No one will be allowed to venture out on July 13, 2021, to commemorate the event and pay tribute to the heroes of Kashmir history.

However, the global Kashmiri diaspora will observe the solemn day to reaffirm their resolve to continue their struggle for self-determination, and to pay homage to over 100,000 innocent men, women and children who have and continue to sacrifice their lives for the freedom of their beloved land in the 90 years since that fateful day.

The people of Kashmir clearly have little faith in or respect for the so-called Indian democracy, and India hasn’t the slightest idea how to earn it. Kashmir returns, again and again, to the same terrible square one. Killings, chaos, confusion, turmoil, uncertainty and dark nights. There is suffering everywhere.

There is darkness everywhere. At the same time, the studied lack of concern from world powers has given a sense of total impunity to the Indian army in Kashmir.

It has also created the impression that the international community is invidiously selective about the application of the principles of human rights and democratic values.

So much for the heart and – possibly even more importantly – the soul of the world powers. One can only recall the quote in Matthew and the betrayal of Jesus: “When Pilate saw that he was accomplishing nothing, but rather that a riot was starting, he took water and washed his hands in front of the crowd, saying, 'I am innocent of this Man's blood; see to that yourselves.'"

The world powers have walked away from the slaughter in Kashmir and washed their hands of it, and the world body has told India: “It’s your problem. See to that yourselves.”

There are a great number of Kashmiri leaders and intellectuals languishing in various jails where they are being subjected to torture, isolation, health care deprivation and unhygienic, crowded conditions.

They are facing the added fear of the COVID-19 pandemic, which is raging among jail staff and security forces. The goal of Indian Prime Minister Narendra's regime is to totally decapitate the political leadership of Kashmir and in the process, it will trample any norms of decency and human rights.

Everyone must see that!

Nevertheless, the people of Kashmir have sent a loud and clear message to the world community that the Kashmir issue is not about governance, economic packages or financial incentives, as proclaimed by Modi when he abrogated Article 370 & 35 A on Aug. 5, 2019.

They want the world to know that the youth of Kashmir are dying in the streets, not asking for jobs and roads. What is their actual demand? It is the demand of the people’s right – the right to self-determination.

Meanwhile, the U.S., the superpower in the world, which must bear the responsibility for setting the global moral tone through disciplined and rightful leadership, sits back and does nothing.

Such behavior poorly disguises the financial incentives that have opened India up to $500 billion in American investment over the coming five years.

Lack of concern about the matter is reflected in the U.S. State Department’s Human Rights Report, which has not and does not keep official records on killings by Indian forces in Kashmir occurring under the Armed Forces Special Protection Act (AFSPA).

They don’t track them. Yet its own website, while alluding to the Universal Declaration of Human Rights, declares so glibly, “We see it as fundamental to our own interests to support a just peace around the world – one in which individuals, and not just nations, are granted the fundamental rights that they deserve.”

U.S. President Joe Biden so eloquently said on Feb. 4, 2021, “We must start with diplomacy rooted in America’s most cherished democratic values: defending freedom, championing opportunity, upholding universal rights, respecting the rule of law, and treating every person with dignity.”

U.S. Secretary of State, Antony Blinken said on Feb. 24, 2021, that “Biden is committed to a foreign policy that unites our democratic values with our diplomatic leadership, and one that is centered on the defense of democracy and the protection of human rights.”

By remaining silent, the U.S. is in fact declaring, though inadvertently, that Kashmiris have no fundamental rights and do not deserve them.

Otherwise, how can you explain it to a Kashmiri when Biden says, “The United States must lead not just with the example of power, but the power of our example.”

Biden may take a leaf from former U.S. President Barack Obama who said on July 10, 2009, in L’Aquila, Italy, “We don't want stronger nations bullying weaker nations. On the other hand, where you have nations that are oppressing their people, isn't there an international responsibility to intervene?"

The world powers need to know that the situation in Kashmir in 2021 is totally different from the past. It is a youth-driven mass movement with social media savvy.

They are educated and enthusiastic to achieve their birthright, the right to self-determination.

The right to decide that was pledged to them by India, Pakistan and the world community.

The desire for self-determination is the one very big “element” India should be concerned about, yet continues to pretend to the world that it does not exist.

However long India refuses to acknowledge it, the decades-old movement in Kashmir will not simply die out.

The world powers, including the U.S., should persuade India to take the following steps:

In conclusion, India and the U.S. should listen to one of India’s most prominent journalists, Vir Sanghvi, who wrote in the Hindustan Times that “If you (India) believe in democracy, then giving Kashmiris the right to self-determination is the correct thing to do.”