Living with the other in harmony 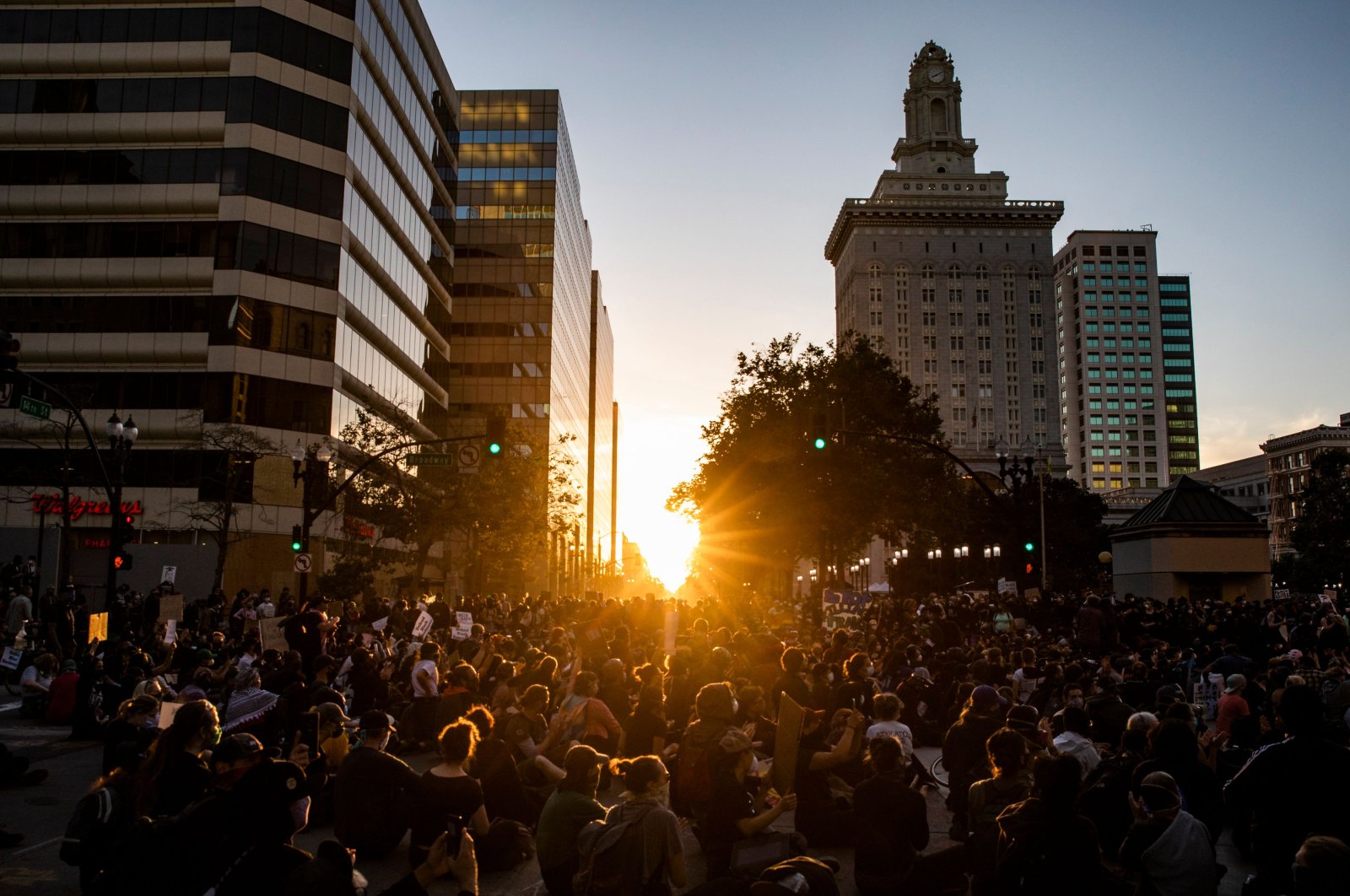 Demonstrators attend a protest against the killing of George Floyd, along a street in downtown Oakland, California, U.S., June 3, 2020. (AFP Photo)
by Adem İnce Jun 05, 2020 12:05 am
RECOMMENDED

As the United States remains in the grips of the coronavirus with the death toll surpassing 100,000, another challenge has now struck the country. Thousands of black people have been protesting across the U.S. over the death of an unarmed black man, George Floyd, who was brutally killed by a police officer pinning him to the ground while he pleaded, “I can’t breathe.” Anger poured through communities after the video showing the last moments of Floyd went viral on social media, and people took to the streets to protest against police brutality toward African Americans.

Of course, this is not the first time we have witnessed such brutality against African Americans, as we are talking about a country where extreme racist discourse has dominated both political and daily life for decades, and white supremacy still runs deep within the country. Even under the presidency of Barack Obama, who was the first black president of the U.S., black people were one of the biggest losers in terms of poverty and unemployment, and the number of black people killed by police was tragic.

Even if it is true that the West has contributed a lot to the development of human rights in the world, its dilemma lies within its hypocrisy which actually stems from the fact that white privilege still dominates societies both in Europe and the U.S. Furthermore, many examples have shown us that the response of Western countries is two-faced when human rights abuses occur in other countries. They seem to have a habit of turning a blind eye to the matter unless it seems beneficial to interfere. I think we have seen enough examples of these insincere policies regarding human rights crises occurring in Egypt, Libya and Syria in the last decade. This same habit can be observed in the behavior of the Western world against foreigners or immigrants in internal politics.

When the historian Niall Ferguson created a series of documentaries called "Civilization" in 2011, he stated six applications that, he thinks, make the West better than the rest, which were competition, science, property, modern medicine, consumerism and work ethic. For Ferguson, these six applications underpin Western civilization. Even though Ferguson has a white supremacist approach to the matter, his classification shows that he sees Western civilization as a technical one. This reminds me of the French economist Serge Latouche who considers the West as a “techno-economical mega-machine.”

Within this technicality, pragmatism dominates almost every relationship, and liberal values also seem to be in the shadow of this utilitarian approach. So, generally speaking, values are not the purpose in this mechanism; on the contrary, they are instrumentalized for the sake of the capitalist system. However, even though the capitalist corporations do not have a racist approach to “others” due to the fact that everyone is a potential customer in a consumerist society, inequality created by this system makes some underprivileged people hostile to others in the society. These people think that this civilization belongs to them, and they are the only ones that should be benefitting from it. In this culture, non-white people are actually seen as the white man’s burden as the writer and journalist Rudyard Kipling put it correctly.

This mentality has made the ultra-nationalist politics popular in the West in the last decade. While the ultra-nationalism is rather a new phenomenon in daily politics, structural and organizational racism have always been the reality of the West. Now, it is actually ironic to see that U.S. President Donald Trump, who is the result of the ultra-nationalist efforts, seems to suffer as president from the unrest caused by this same racist attitude. What is also ironic is that he might also be getting stronger due to the rise of polarization in the society.

What is the solution?

To Aristotle, politics is not about the will to rule but is the motivation to live together socially. Living together with the other in harmony is what makes mankind human beings. Ali Shariati, a sociologist, also thinks that altruism is what makes us humans different from any other creature on the planet. African American human rights activist Malcolm X suggested that Islam could be the cure for the racist attitude in the U.S., as he saw that it teaches people that no one is above any other in an ethnic sense. In this regard, the Constitution of Medina, one of the first written consensuses of the idea of multiculturalism, was actually a good example of the will to live together in harmony. Nevertheless, Muslims also seem to have lost the idea of living together in harmony nowadays.

We must face the fact that it is quite difficult to live with the other in today’s world. With the globalization of the world wherein the Western culture has flourished, the material world it brings with it has made many people lose patience to tolerate differences. The 14th Dalai Lama, Tenzin Gyatso always stresses the importance of not losing our spiritual side while we are enjoying the material development which, for him, can only result in physical comfort. Likewise, Alexis Carrel, who is the author of "The Man Unknown," stated that humans have lost some of the fundamental values such as compassion and tolerance because of the fact that they discover the material world without discovering themselves. And one can only discover himself or herself by looking at the other and learning from the other. This is an endless journey in which one can continuously discover himself or herself by living with the other in harmony. This is what makes us human beings.