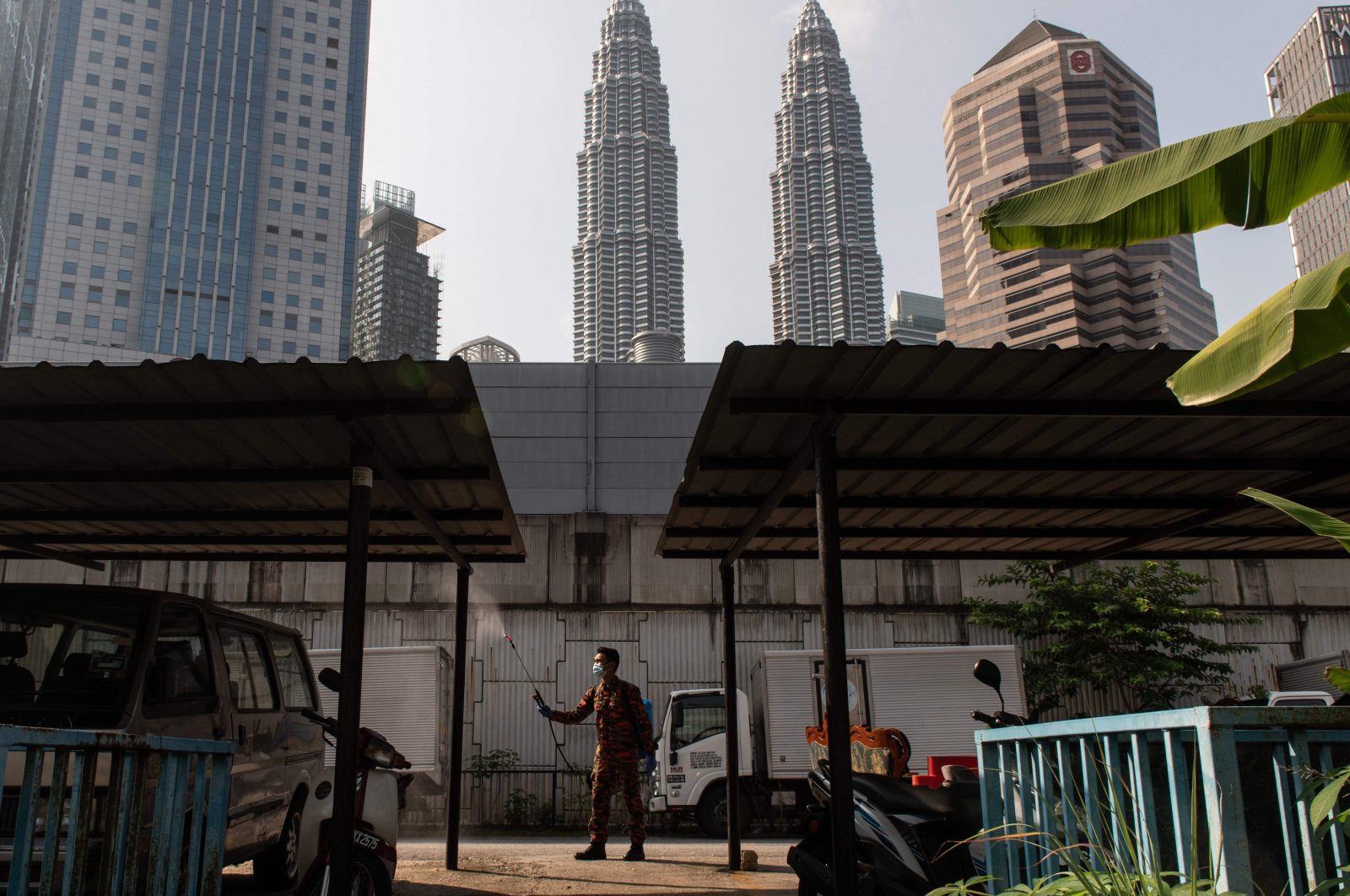 A man sprays disinfectant near a residential area during the Movement Control Order as a preventive measure against the spread of COVID-19, Kuala Lumpur, Malaysia, Tuesday, March 31, 2020. (AFP Photo)
by Muhammet Ali Güler Apr 07, 2020 12:05 am

In Malaysia and beyond, the coronavirus pandemic is a message to all that cooperation between countries and societies needs to be much stronger

Nations across the globe have begun focusing on the spread of COVID-19 through several preventive measures. Some examples of these measures include the self-isolation of nations both internationally and domestically.

While dealing with the sudden change in political power from the Pakatan Harapan government to the Pakatan National government, the coronavirus was able to infiltrate and gain a foothold on Malaysian soil. Unfortunately, according to the latest updates, the total number of coronavirus cases has surpassed 1,000. Out of this, more than 80 patients have recovered, while 15 health care workers have been infected by the virus. On March 18, the Malaysian government implemented the Movement Control Order (MCO) until March 31, which was in line with the Prevention and Control of Infectious Diseases Act 1988 and the Police Act 1967 in order to stop the virus from spreading.

In regard to the Movement Control Order, Malaysians are not permitted to leave the country and all foreigners are barred from entering Malaysia. In addition, schools, pre-university education centers and nonessential services, both governmental and private, will be closed as well. Many activities and gatherings, including for religious purposes, have also been suspended with the decision of the Special Muzakarah Council for mosques. Not only have mosques been closed, other houses of worship have also been ordered closed. Hopefully, all those living in Malaysia will abide strictly by the rules so that the country can overcome this epidemic as soon as possible. On March 18, interstate travel was also restricted. People who do not abide by the rules will be punished.

I contacted my Malaysian friends during this challenging time and discovered that they welcome the restrictions. They sent me pictures that show only a few people milling about at markets, while the big malls were almost empty. Due to the hot weather, malls generally stay empty this time of the year. For example, the Suria Mall at the bottom of the symbolic twin towers in Kuala Lumpur is empty with a vast majority of the shops closed as a precaution.

According to the International Labour Organization, nearly 25 million people across the globe may leave their jobs due to the ongoing pandemic, while this number may reach up to 1 million in Malaysia. Besides that, it is predicted that many Malaysians working in Singapore may lose their jobs as well due to the travel restrictions in the country. This is due to the fact that thousands of Malaysians routinely commute daily to Singapore for work. There are around 700,000 Malaysians in Singapore with nearly half commuting every day between Johor, a state in the southern tip of the Malay Peninsula that shares two land bridges with Singapore. How companies respond to this situation is very vital.

Mosques are one of the best places to meet worshippers and to participate in various activities. However, nowadays, Malaysians and Muslims across the world must take preventive measures. Sadly, there have been some new cases attributed to mass gatherings in mosques. For example, in Malaysia, over 500 out of 1,030 COVID-19 cases have been linked to the gathering at the Sri Petaling Mosque. In this gathering, there were people from around 30 countries in attendance. Some of these participants included two from Turkey, three from Saudi Arabia, one from Egypt, two from Korea, around 700 from Indonesia, 215 from Philippine, 132 from Thailand, 130 from Vietnam, 95 from Singapore, 35 from China, 79 from Cambodia, 74 from Brunei, nine from Bangladesh, 18 from India and so on. The total number of foreign attendees was nearly 1,500, while 15,000 Malaysians were present.

The following are the list of rules pertaining to the MCO active from March 18 to March 30;

A ban on all mass gatherings including religious services, sports and social events.

A ban on all Malaysians from traveling abroad while restricting foreigners being allowed into the country.

The closure of all daycare centers and primary, secondary and pre-university schools. This is in addition to shutting down all higher educational institutions and vocational schools.

The closure of all government and private premises, except those providing essential services.

I spoke to a few officials from the University Malaya (UM). They expect that the UM would officially come to a decision that the whole of the current semester would be counted as leave for all students to minimize the risk of spreading COVID-19. It would be a very wise and rational move as people are worried about themselves and their beloved family members since it is a very infectious disease. Additionally, students at the UM are very active. An entire semester break would mean students could rest their spirit and body without getting depressed and stressed about classes this semester.

I have learned that people have been mocking, disturbing and shouting at those with Asian features. A friend of mine explained that her Malaysian and Indonesian friends in Europe, Jordan and Egypt have faced such discrimination as well. We should avoid those kinds of immoral discourses, attacks and comments.

The best way to protect yourself from COVID-19 is to follow the instructions from international and national health organizations, such as the World Health Organization (WHO), and the health ministries of your own countries. Attacking and mocking others will not save anyone from becoming sick.

Everyone must be cooperative, disciplined and obedient during these difficult times; otherwise, it would be very difficult to curb the spread of the virus.