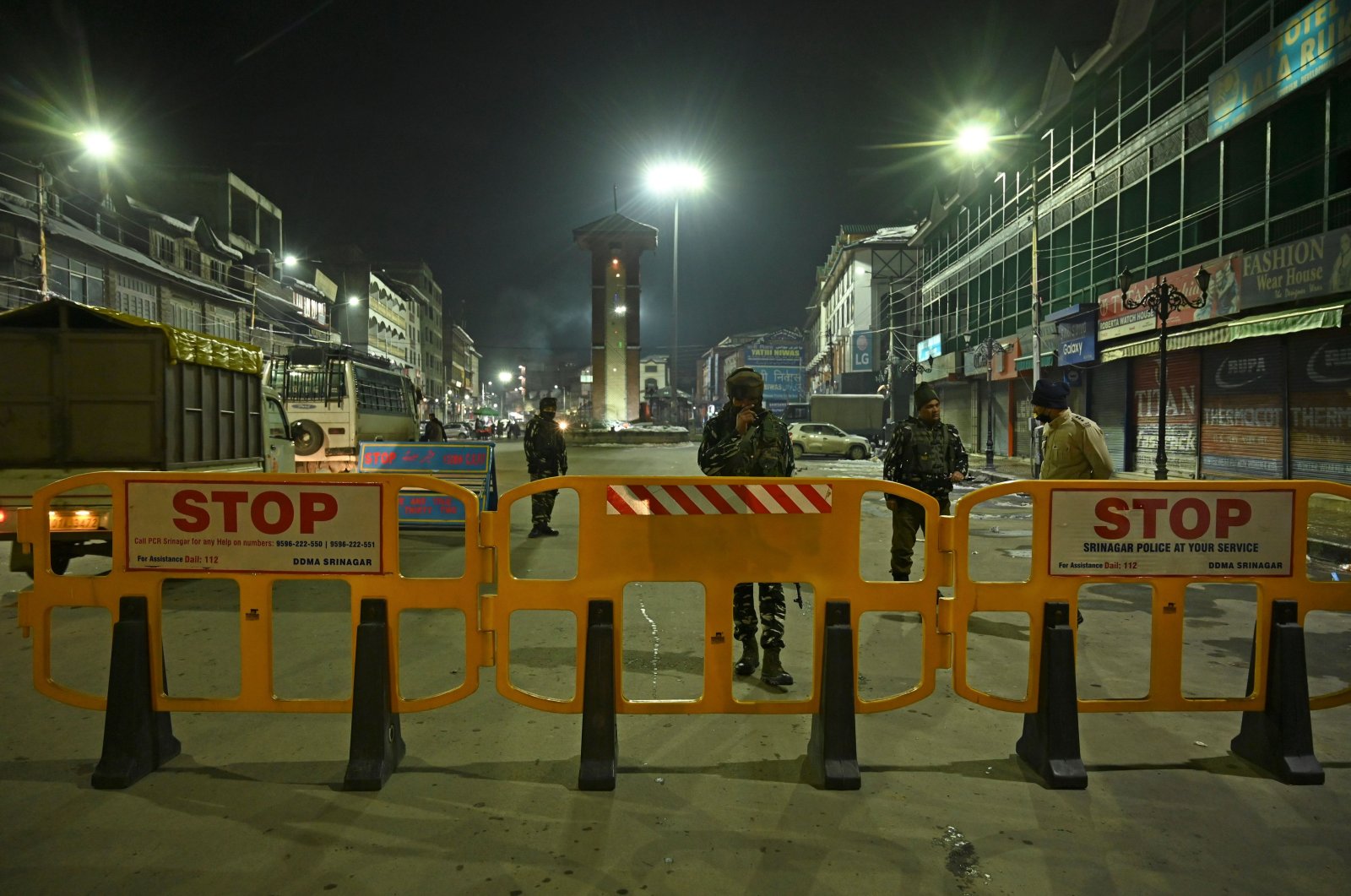 Paramilitary troopers stand guard along a street on the eve of India's Republic Day celebrations in Srinagar, India-occupied Jammu and Kashmir, Jan. 25, 2021. (AFP Photo)
by Irfan Ashraf Jan 27, 2021 12:05 am
RECOMMENDED

Kashmir has been the location of a long-standing dispute despite a number of recognized international and United Nations resolutions relating to its status. Notwithstanding international law, however, the region has witnessed the killing of many Muslims since 1947.

Indian Prime Minister Narendra Modi and the Hindu nationalist Bharatiya Janata Party (BJP) had long opposed Article 370 in Kashmir, which provided the state with a special status in the nation's constitution.

In the first few days of August 2020, there were signs something was amiss in Kashmir. Tens of thousands of additional Indian troops were deployed there. A major Hindu pilgrimage was canceled, schools and colleges were shut, tourists were ordered to leave, telephone and internet services were suspended and regional political leaders were placed under house arrest.

Many Kashmiris believe that the BJP ultimately wants to change the demographic character of the Muslim-majority region by allowing non-Kashmiris to buy land there. They were relying on U.N. resolutions and believed that the international group would give them their rights as per the resolutions.

Turkey supports the Kashmiris’ struggle for their rights. President Recep Tayyip Erdoğan, at the U.N. General Assembly last September, said that “Kashmir is as important to Turkey as Pakistan.”

He said India's unilateral steps had worsened the suffering of the Kashmiri people in recent years, but everyone is denying New Dheli's policy changes.

U.K. parliamentarians held a debate on India's illegal occupation of Jammu and Kashmir (IIOJK) on Jan. 13 in Westminster Hall. Sarah Owen, a U.K. member of Parliament (MP) who secured the debate, said the curfews seek to control people’s lives, not to curb a virus, and are enforced by half a million soldiers.

Another U.K. MP, James Daly, said that there is now an opportunity to come up with an international program through the U.N. that will give succor and hope to those poor people in Kashmir, who for 70-plus years have been going through the most awful, appalling hell.

Other MPs also voiced the same messages and tried to draw global attention to the inhumane crisis in the region, saying it is time to act, but they only speak.

In the region, many truly heartbreaking stories are being heard. Women are tortured. Human rights are apparently easily violated.

According to the U.S. newspaper Daily Beast, there have been some fatal missteps by the Indian army that are just now coming to light.

Daily Beast referenced a police charge sheet, but Kashmiris and human rights activists have long accused the Indian armed forces of targeting innocent civilians, labeling them “terrorists” to claim bounties and to win promotions through the army ranks.

It has been observed that India has been promoting violent actions and non-state elements in different areas of Pakistan since 1947. It has made many false statements. The Pulwama incident, for example, was terrible and horrific, but it served Modi’s electoral victory at the end of the day.

A very similar Indian policy is now observed regarding Indian farmers at the Singhu border. Thousands have held massive protests against the government’s controversial agriculture reform.

A person who may have been contracted by local authorities is said to have claimed to be assigned to shoot four Indian farmers and disrupt the media. Addressing a press conference on Friday night, Indian farmers at the border alleged a sinister plot to disrupt the agitation. They presented a masked man who claimed his team members were allegedly asked to pose as policemen and baton-charge the crowd if things got out of control during the Jan. 26 tractor rally. He also named police officials allegedly involved in the plan.

According to a report by the independent nonprofit organization, EU Disinfo Lab, and Indian news anchor Arnob Goswami, India has become the epicenter of disinformation against Pakistan. Internationally, everyone agrees that India is promoting human rights violations in different regions of the IIOJK. We can only hope that the U.N. will help Muslims and all people of the region get their rights returned and stop India from humiliating the law.

* Analyst on international relations based in Islamabad, Pakistan