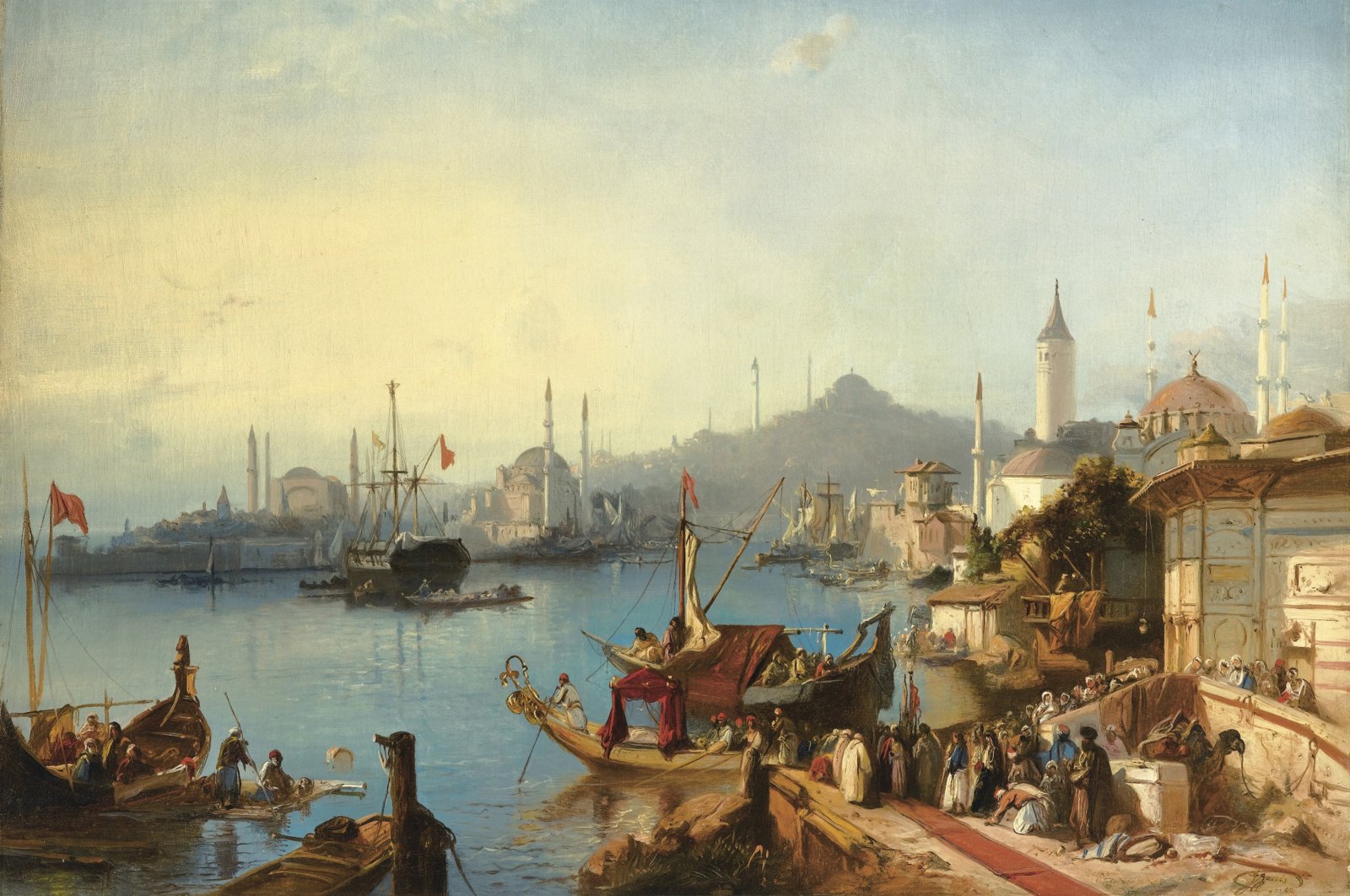 A painting by the famous Belgian Orientalist artist Jacobus Albertus Michael Jacobs, known as Jacob Jacobs, shows a view of Istanbul during the Ottoman Empire period in 1842. (Photo by Getty Images)
by Mehmet Şükrü Yaman Apr 30, 2021 12:05 am
RECOMMENDED

The aim of the Ottoman Empire taking part in the Universal Postal Union (UPU) congresses was to have the opportunity to closely monitor and understand the developments in the field of international postal services and to take part in the process of creating regulations that everyone would accept.

However, postal violations and foreign postal administrations in the Ottoman lands were the primary agenda items. Still, the follow-up of developments in mail was certainly no less important than the others.

The main focus of all states was to decide the principles and standards of international postal services that would not harm their interests.

The Ottoman Empire was the only country among the founding states of the UPU to have such a different understanding, which was worthwhile, necessary and legitimate.

In this sense, the Ottoman Empire looked after the rights of Ottomans up to the end. As such, it developed a postal strategy by making no concessions to the illegitimate operations of European post offices in its territories.

In addition, the existence of foreign post offices constituted a violation of the Ottoman Empire's sovereign rights, which became a postal battle in this period, and European states never agreed to the settlement proposal of Ottoman governments.

On the contrary, all those state parties came together. They accused the Ottoman postal services of not being capable of performing its essential functions.

This accusatory attitude was nothing less than an outpouring of belittlement and alienation. They were simply afraid of losing their commercial influence and therefore accused the Ottoman Empire of doing nothing in the field of postal services.

They also denied the fact that the Ottoman Empire was the only authority responsible both for domestic and international postal operations. The Ottoman governments endured this attitude from the 1860s to 1922.

The UPU official congressional records are official proof that these two tasks had been maintained by Ottoman delegations for an extended period.

Considering the European-based postal unions and the historical progress before and after the 1863 Paris international postal conference, we can see the build-up factor and progress made in the history of international mail.

European states and their delegations to the UPU were composed of senior executives, public officials, diplomats and postal experts familiar with the knowledge and background of international mail. They gained, therefore, undeniable experience concerning postal negotiation principles.

From this perspective, it is understandable that the first Ottoman delegations encountered difficulties or took part in negotiations unpreparedly during the Bern Congress and several subsequent international postal gatherings.

Another critical issue that can be attributed to the postal administrations of the European states, which were parts of postal violations in the Ottoman Empire, is that their senior executives or director-generals remained in charge for a long time.

They spent almost all their professional lives under the umbrella of postal administrations until their retirement or death.

In addition, their delegations to the UPU were mainly composed of the same individuals. These representatives were among the most influential figures taking part in defining international postal standards and regulations.

It is interesting to see that those highly qualified postal experts formed the basis of the success level that European postal administrations have achieved today. France, Germany and the U.K. are the most prominent examples.

On the other hand, the Ottoman Post presents a different outlook in this regard. We can somewhat identify with this Ottoman Empire postal strategy.

The Ottoman Post was a newly founded public administration. Therefore, the Ottoman governments were constantly searching for the best executives to manage postal planning and organization.

For that reason, the director-generals in charge had been changed at regular intervals. However, this situation was at odds with the principle of sustainability from many perspectives. This detail becomes critical when we look at the postal contradictions in the Ottoman Empire.

In light of this reality, these regular reassignments caused disruptions in service flow and strategies. Naturally, that situation also disrupted ongoing works, activities, planning and services.

As an example, we see several changes during the sensitive process that gained intensity with the UPU membership.

It is seen that Izzet Effendi was appointed as the director-general instead of Haydar Pasha in 1877. In 1879, he was replaced by Haydar Pasha. Izzet Effendi, who served as general manager between 1877 and 1879, was reappointed again as the highest postal official in 1880.

In the light of this information, it is worth focusing on the fact that there was no delegate with the title of director-general in the Ottoman delegations to the UPU congresses.

On the contrary, the most competent officials represented European postal administrations for decades. They knew the postal field very well and guided the world in this sense. The need to establish a similar culture in Turkish Post had not been identified yet.

It is essential to know that the involvement of European states in international postal meetings with the same representatives dates back to before the foundation of the UPU.

At UPU congresses and various postal conferences, this culture reached a continuity and conclusive habit. It is possible to monitor this development through the participant lists in the official UPU records.

The importance given to the representatives' stability or the care paid to the protection of the delegations paved the way for the states to stand out prominently in the studies and be decisive in decision-making processes.

On the other side, the UPU delegations of the Ottoman Empire indicate that different people attended each congress. The number of delegates was generally limited to a few people.

Despite this, all delegations of the Ottoman Empire played a prominent role, especially in the Bern, Vienna and Washington congresses.

UPU meetings and councils, where postal issues were discussed at length, allowed Ottoman representatives to closely examine the negotiation techniques in the postal area and gain both knowledge and experience.

It is possible to make various assessments that no proposal had been submitted by the Ottoman delegation based on the UPU convention and regulations.

Except that the congress would not accept a foreign post-offices-based proposal, any other submission of any substance could have been prepared alone or with another state. That would enable a culture of encouragement.

Thus, the Ottoman Post could assume an identity that was considered in the negotiations, allowing Ottoman delegates to have confidence and take on a bold negotiating spirit.

Despite the firm interventions of the Ottoman delegations, UPU congresses show that the problematic issues of foreign post offices led to insolvency.

The Ottoman Empire is the first country to ask the UPU to end postal violations in Ottoman lands and give advice or expert opinion to the related European member states. Yanko Makridi, the first Ottoman representative to the UPU congresses, delivered a historical message on behalf of the Ottoman government on Sept. 16, 1874, during the first session of the international postal congress.

With this declaration, the Ottoman Empire took a unique stance to establish postal unity and integrity on its territory. Despite all efforts and a historical overview of postal violations, the close-up and insensitive approach of the related states became a significant obstacle inside and outside the UPU. It also prevented the Ottoman Post from being the only service provider of the Ottomans.

The points at which there is a connection between Turkey's accession to the UPU and Turkey's UPU Council of Administration (CA) presidency term during the Istanbul Cycle (2017-2020) are worth considering.

Switzerland, which hosted the UPU and ran the International Bureau until the 1960s, actively worked at congresses and contributed directly to shaping postal matters.

The Swiss-administered UPU had to comply with impartiality as the host postal authority regarding the postal crisis happening in Ottoman lands.

However, it was made clear that the term presidency and the country's representation were different things. Switzerland's role did not constitute an impediment to the active participation and contribution of the Swiss delegations in the UPU works and activities.

Within this direction, there is something that we think can be associated with the determination of Ottoman delegations. Even though they were composed of a few delegates only, the responsibility assumed was quite heavy.

It was precisely a multifaceted consciousness that needed to include different elements. However, the delegations before and during the Istanbul Cycle offer the opposite view.

The quality remained below the quantity. While this period was a unique opportunity to close the threshold with Europe, no significant progress has been made in international postal literature, service standards or diversity.

Indeed, the image of the Turkish postal service deserves to be promoted efficiently on global platforms.

Besides, similar to the changes in the Ottoman Post's senior management following the UPU membership process, the appointment of three different director-generals between 2015 and 2020 is another serious issue that needs to be addressed.

Last but not least, Turkey completed its UPU's CA presidency with two different representatives. We should remember that the most important thing is how to start down the road.

Neither the UPU membership process nor the high-level UPU CA presidency term is easy to catch. These realities require a more serious planning and preparation phase in every sense.

Therefore, it is helpful to remember that high-level executives and employees are needed for the Ottoman Empire's struggle to be meaningful today.

These are essential elements to consider for smooth service delivery in Turkey and the Turkish Post and Telegraph Organization (PTT) will embrace the future in every aspect and therefore compete with the best operators in the world.