Palestinian holy places in the eye of the storm 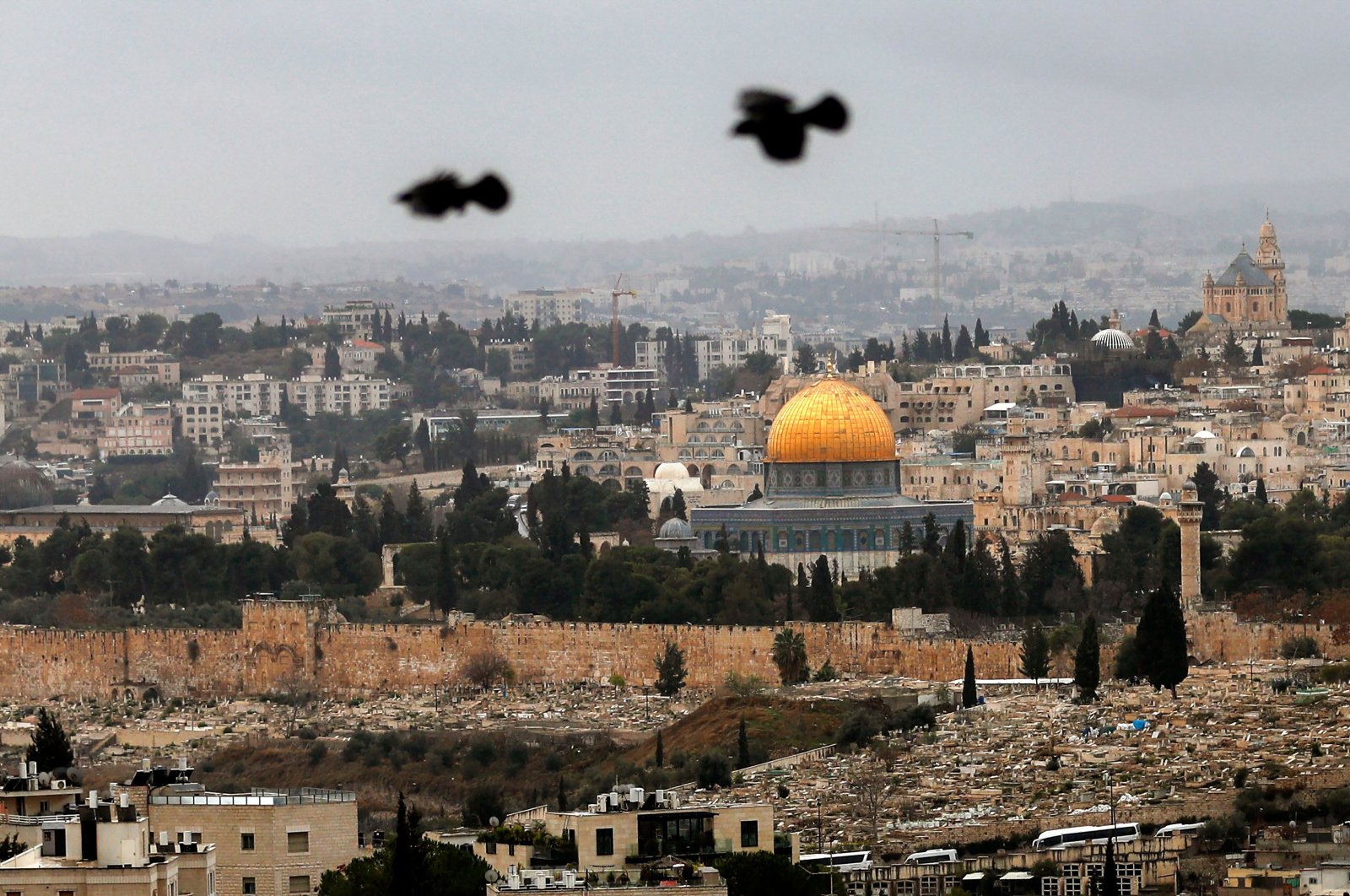 Israel's deeds in the Al-Aqsa compound, also known to Muslims as Haram al-Sharif, are a proof of the country's limitless targeting of Islamic holy sites

In a highly aggressive move last month, Israeli President Isaac Herzog, accompanied by illegal settlers, stormed the Ibrahimi Mosque in the occupied city of Hebron in the southern West Bank to "light the Hanukkah candle" in the compound to celebrate the Jewish festival of lights. At the same time, Israeli forces prevented Palestinian worshipers from reaching the mosque and expelled those already there.

Besides, just recently, Tel Aviv has started allowing Jewish prayers at the Al-Aqsa complex. It is a major change to the status quo that has existed at the holy site since Israel captured the Old City of Jerusalem during the 1967 Six-Day War, in which Jews were allowed to visit under numerous restrictions, but not to pray. The judicial decision came after an Israeli settler, Rabbi Aryeh Lippo, went to court to get a temporary ban order from entering Al-Aqsa lifted. The order was imposed on him by Israeli police after he performed prayers at the compound.

The bloody confrontations between Palestinians and Israeli security forces have repeatedly occurred as more and more Jews have entered the Al-Aqsa compound, which they refer to as "Temple Mount," to pray. Palestinians describe the Jewish visits to the site as provocation and accuse the Israeli government of systematically trying to undermine earlier agreements to expand its own control.

Jordan’s Council of Endowments, which manages the Islamic edifices in the Al-Aqsa compound, called the move a "flagrant violation of the Islamic and sanctity of the mosque and a clear provocation to the feelings of Muslims around the world." The compound, also known as the “Haram al-Sharif" (noble sanctuary in English), represents the world's third holiest site after Mecca and Medina, one of the Palestinian strongholds in Jerusalem and the icon of all Muslims and as well as a key national symbol.

Israel significantly changed the character of most of the holy sites, especially the Ibrahimi Mosque, when it divided it into a synagogue and a mosque. The country has been trying by all means to control the compound, representing Israel’s ideological view that all of the land of Palestine belongs to the Jewish people. It attempts to delegitimize Palestinian history and claims to the land as well as other faiths connected to these holy sites.

Following Israel's occupation of the West Bank and East Jerusalem in 1967, the Israeli government passed the Protection of Holy Places Law, which states that “the Holy Places shall be protected from desecration and any other violation and from anything likely to violate the freedom of access of the members of the different religions to the places sacred to them or their feelings with regard to those places.”

At the same time, in practice, the Israeli government limited the Muslim control at the Al-Aqsa compound, by declaring that Jews had the right to unrestricted visits to the mount, as long as they respected traditional customs and practices. Besides, the key to the Mughrabi Bridge (a bridge connecting the Western Wall Plaza with the Mughrabi Gate of the Temple Mount in Jerusalem) was removed from the waqf (an Islamic endowment of property to be held in trust and used for a charitable or religious purpose) office by Israeli soldiers to give practical expression to the government's decision.

Israel’s assault on the compound and its attempts to upend the status quo at the site since that day never stopped. The Israeli excavations beneath the compound have been in full swing in the past years, and the diggings have gone under the foundations of the compound at a depth of more than 20 meters (about 65 feet) underground. These excavations have caused cracks in the chapel of women, the building of the waqf department and the southern and western walls of the compound as well as the walls of al-Ashrafieh school, located inside the compound.

In July 2017, UNESCO adopted a resolution that denounced Israel's failure to "cease the persistent excavations, tunneling, works, projects and other illegal practices in East Jerusalem, particularly in and around the Old City of Jerusalem, which are illegal under international law." The resolution further stated that "legislative and administrative measures and actions taken by Israel, the occupying power, which have altered – or purport to alter – the character and status of the holy city of Jerusalem ... are null and void and must be rescinded forthwith." Israel, for its part, refused to allow access to UNESCO to examine the holy sites in East Jerusalem.

The longstanding policy of all successive Israeli governments has been the preference for and expansion of holy sites for Jews throughout the country and particularly in Jerusalem. The Israeli legislative and judiciary system is committed to approving the intensive political activities by the Israeli governments adapted towards solidifying and strengthening the Jewish identity of the holy sites although most of the holy sites are holy for more than one religion.

In 2018, in parallel to the legislation of a law declaring Jerusalem as the capital of Israel, regulations were passed regarding the preservation of sites holy to Jews including a list of 16 sites. Since then, extensive activity has been carried out at these places to strengthen a Jewish identity while excluding members of other religions.

With the exception of the 16 places specified in the regulations and as laws of Israel do not grant formal recognition of additional holy places for Jews or for other religions, this obscurity enabled Israeli authorities to channel financial resources and handle operations at many other holy places sacred also to different religions and transfer them to Jewish possession. This has been the practice since the establishment of Israel in 1948, and has only increased since 1967.

On the other hand, as many of the holy sites are also antiquities, the Israel Antiquities Authority, an independent Israeli governmental authority responsible for enforcing the 1978 Law of Antiquities, and the religious entities, despite their conflicts of interest, collaborate in systematically changing the holy sites particularly of Jerusalem, pushing other religions aside.

Israel's continuous land grabs and their takeover of mountain ranges and hills throughout the occupied West Bank have prevented Palestinians from accessing their Muslim shrines while many were deliberately destroyed. According to a 2020 report by the Israeli anti-occupation group Machsom Watch, "maqams" (tombs or shrines built on a site associated with a Muslim saint or religious figure) across the West Bank have been informally annexed to Israeli settlements through military orders expanding Israel Defense Forces' open-fire zones, entrapment in nature reserves and antiquity sites.

Since 1967, Israel has, according to Machsom Watch, made a clear distinction between holy sites that honor Jewish biblical figures – which receive official recognition from Israeli authorities and are maintained on a regular basis – and maqams that are holy to Muslims alone and are either neglected or annexed.

Machsom Watch’s research found 40 such sites are trapped inside settlements and nature reserves, such as the Maqam Sit Zahra, which was built 400 years ago, located now in the Jewish Kochav HaShachar Nature Preserve, northeast of Ramallah, Maqam Salman al-Farsi, trapped in the heart of Yitzhar settlement in the northern West Bank, and Maqam Sheikh Bilal ibn Rabah, trapped in the Elon Moreh settlement.

These are only a few examples of how Israel’s land takeovers are carried out and how Palestinians are prevented from accessing holy sites of worship, which served as religious, cultural and community centers in the rural areas of Palestine long before villages had their own mosques.

The Judaization of holy places is a part of the broader process whereby the State of Israel has made every effort to develop a new symbolic Jewish landscape. It began in 1948 and received institutional support for expropriating Muslim holy places and turning them into active sites of Jewish prayer. The 1967 Six-Day War engendered another enormous change in the map of Jewish holy places and the Judaization of Muslim holy places has continued in different regions of the Palestinian territories, while public and institutional attention has concentrated on East Jerusalem, which has featured the expulsion, exclusion or marginalization of its Palestinian residents and the systematic Judaization of their holy places.

Lost in the religious warfare narrative is the colonial impulse governing Israeli actions and its use of religious dogma to justify its violent takeover of Jerusalem and the rest of the West Bank to complete the occupation of all Palestine.