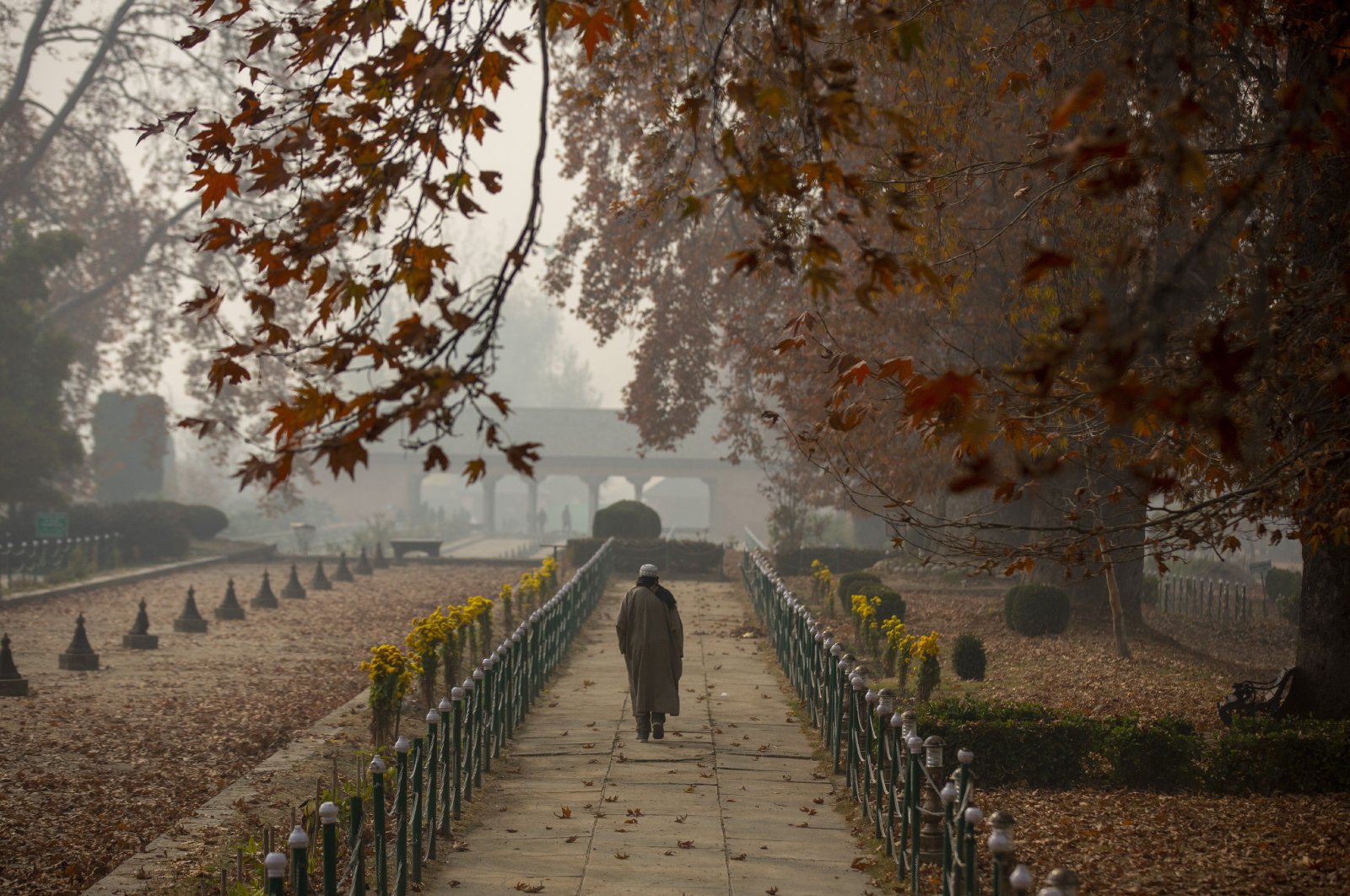 A Kashmiri man walks in a garden covered with fallen Chinar leaves on the outskirts of Srinagar, Indian-occupied Jammu and Kashmir, Nov. 11, 2020. (AP Photo)
by Syrus Sajjad Qazi Feb 05, 2021 12:05 am
RECOMMENDED

Every year, on Feb. 5, the people of Jammu and Kashmir and Pakistan commemorate the Kashmir Solidarity Day. On this day they renew their commitment to the Kashmiris’ inalienable right to self-determination. This right was promised to them by the United Nations more than 70 years ago.

In 1948, the United Nations prescribed a U.N.-administered free and fair plebiscite to ascertain the wishes of the Kashmiris about their future – whether Kashmiris wanted to join Pakistan or India after the British left South Asia. The U.N. also stated that until the plebiscite was held, neither India nor Pakistan could take any steps that changed the situation on the ground.

Unfortunately, since then, all manner of political, diplomatic, military, economic, parliamentary, constitutional and demographic jugglery and coercion has been employed to deny this right to the Kashmiris in the Indian illegally occupied Jammu and Kashmir. Despite this, the Kashmiris’ desire to decide their own future remains undiminished. On Feb. 5, Kashmiris remind themselves, the world and above all India, the occupying power, that they have not forgotten the promise made to them.

There are at present an estimated 900,000 occupying troops in Jammu and Kashmir. This makes the area the most heavily militarized region in the world – about one soldier for every 10 Kashmiris. Even the toughest prisons and the worst concentration camps in human history cannot match this ratio.

These occupation forces are of course armed with lethal weapons. They are also armed with laws granting them immunity and impunity for using these weapons against the occupied population as they see fit.

While all Indian governments have turned a blind eye to the actions of their soldiers in the region, the current dispensation, immersed in its ideology of Hindutva, particularly encourages its occupation army to do whatever it takes to break the will of the Kashmiris. An Indian army officer, who tied a Kashmiri man to the front of a military jeep and paraded him publicly against all humanitarian norms, was lauded rather than reprimanded.

The occupied Kashmiri population is therefore experiencing every manner of indignity and suffering that foreign occupation entails. The fact that these actions are carried out by the self-proclaimed biggest democracy in the world has perverse implications for the Kashmiris – it is like a community elder using his position to shield himself from the consequences of engaging in behavior that is totally unacceptable.

The list of India’s crimes in Jammu and Kashmir is long and disturbing. On top of the refusal to honor its word to the Kashmiris and the U.N., these abuses include extrajudicial and summary executions, custodial deaths, torture, enforced and involuntary disappearances, arbitrary detention, rape and molestation, collective punishments, denial of the right of freedom of expression and opinion, indiscriminate cordon and search operations, use of force against peaceful protesters, deeply degrading behavior toward the occupied population, and the list goes on.

The U.N. High Commissioner for Human Rights, several members of parliament in different countries as well as international organizations and nongovernmental organizations (NGOs) including the Organisation of Islamic Cooperation (OIC), Amnesty International and Human Rights Watch have expressed concern regarding the grim human rights situation in the occupied territory.

Genocide Watch, a nongovernmental international watchdog, has expressed fears of genocide against Kashmiris living in Jammu and Kashmir, concluding that “10 stages of the genocidal process are far advanced” in the valley.

Separately, several independent international observers have expressed their desires to visit the region to ascertain the situation there. Just like the Kashmiris, they are likely to be kept waiting.

It is ironic that in the list of crimes and human rights violations being perpetrated, the "least offensive" is the use of pellet guns by the occupation forces against unarmed Kashmiris. Indian authorities openly defend their use as “a modern nonlethal method to deal with crowds, particularly agitating mobs.” If this is what they believe to be defensible, one wonders what indefensible is like.

Because of these pellet guns, among the region’s many dubious distinctions, one is that it has the highest proportion in the world of people who have been unnaturally blinded or visually impaired.

The shotguns fire cartridges containing around 500 pellets that spread over a wide area. There is no effort to target a particular individual or even the intention to do so. The objective is to sow fear and hurt as many people as possible with a single pull of the trigger. The weapon is not just indiscriminate, it is like a mini-cluster bomb and a form of collective punishment.

According to Amnesty International, local Kashmiri politicians and other observers, pellet gun injuries in Jammu and Kashmir number in the thousands. No segment of the Kashmiri population has been excluded from the roster of victims – infants, schoolchildren, college students, men, women, the elderly – all are there and all have suffered injuries, particularly complete or partial blindness.

There appears to be a more insidious intention behind the use of these guns – to maim someone in such a manner that he or she becomes a physical and psychological burden on the family, is unable to earn his or her living, and becomes a constant and harrowing reminder to the community of the cost of standing up to the occupying power.

Twenty-four-year-old Danish Rajab Jhat was hit in the face with 92 pellets. His left eye had to be removed. Fifteen-year-old Insha Mushtaq from Shopian lost vision in both of her eyes. Ten-year-old Tamana Ashiq, a fourth grade student in Ganderbal, lost her left eye at her home when she was looking out the window.

The use of pellet guns violates customary international humanitarian law as it constitutes "indiscriminate use of force’" causing "excessive injuries" (Rule 70). The U.N. Basic Principles on the Use of Force and Firearms “prohibit the use of those firearms and ammunition that cause unwarranted injury or present an unwarranted risk.”

The 2020 U.N. guidance on “less-lethal weapons” in law enforcement says: “Multiple projectiles fired at the same time are inaccurate and, in general, their use cannot comply with the principles of necessity and proportionality. Metal pellets, such as those fired from shotguns, should never be used.”

It is time that the perpetrators of such brazen violations of international law in Jammu and Kashmir are held accountable. As a first step in a long list of actions that must be taken, the use of pellet guns must be stopped.

*Ambassador of Pakistan in Ankara, Turkey

Ambassador of the Islamic Republic of Pakistan to Turkey
RECOMMENDED