Refugees in midst of COVID-19 crisis 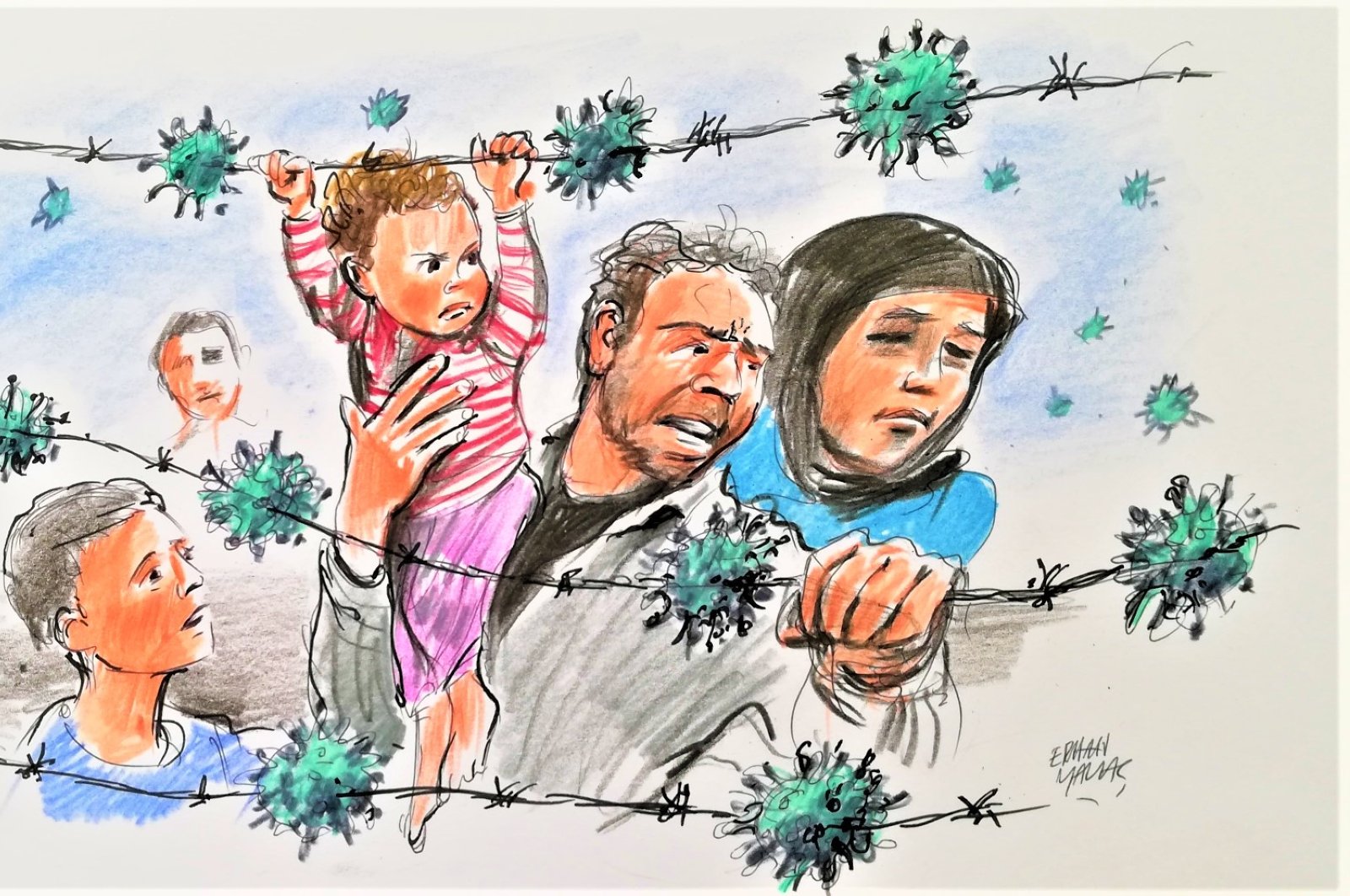 The coronavirus (COVID-19) outbreak that broke out in Wuhan, China, in December and has taken over the entire world, has been at the top of the global agenda for months. However, just like during earthquakes and other disasters, refugees always seem to be forgotten. The situation is no different in Turkey, the country which hosts the greatest number of refugees/migrants. Refugees in many countries face the pandemic on the one hand and the threat of starvation on the other.

The coronavirus crisis, resulting in the death of around 535,000 people around the world, coincided with the days when the Turkish government’s decision to open borders for refugees led to a serious rift between Turkey and the European Union.

In this chaotic atmosphere, Turkey's Minister of Health officially announced the first COVID-19 case in Turkey on March 10, 2020. Many factors such as the number of tests conducted, transparency in case reporting and the effectiveness of the measures taken showed that the right decisions were made.

Just before the COVID-19 outbreak, the Syrian refugee issue topped the national agenda. Turkey has already given refugees free access to public health care services and has strengthened its capacity with new health care facilities in provinces with high refugee populations. Therefore, the need to assess refugees separately may not yet be felt.

One of the problems that the coronavirus pandemic has pushed to the background is the issue of refugees. This issue was at the top of Turkey's agenda until the outbreak of the pandemic last February, creating serious tension in its foreign relations.

The pandemic has frozen this problem. While all countries have mobilized against this deadly virus, borders have been closed, the migration movement has stopped, and agreements previously reached against illegal migration have been pushed aside.

Turkey, on its own, shoulders the responsibility of hosting more than 4 million foreign migrants, including 3.6 million Syrians. So, before the outbreak spread to our region, Turkey made several moves to mobilize Europeans on the issue. Ankara closed its border with Syria to counter a new wave of migration on the one hand, while lifting earlier bans preventing asylum seekers from passing to Europe from Turkey on the other, giving the green light to their passage to Greece.

This led to new tension with the neighboring country.

In addition, Turkey has been further distanced from the EU, which it accuses of failing to fully fulfill the provisions of the agreement signed in 2016.

The coronavirus crisis has frozen all these tensions, but it has not eliminated the problem of refugees for Turkey. In addition to Syrians, “migrants” from countries ranging from Afghanistan to Iraq and Pakistan to Ethiopia pose a problem that Turkey still has to shoulder alone. This situation seems to continue unless the conditions created by the coronavirus pandemic change. It is unclear what will happen after the pandemic.

The remarks by Deputy Foreign Minister Faruk Kaymakçı during an online program the previous day revealed the serious dimension of the problem for Turkey and the need for the international community to continue to support Turkey despite the pandemic.

In the program organized by the Asylum and Migration Research Center (IGAM), Kaymakçı reminded that the EU has not fully fulfilled the provisions of the 2016 agreement, and paid only 2.6 billion euros ($2.9 billion) out of 6 billion euros, while the other part has remained in the technical stage of project work and the like. Kaymakçı stressed that the coronavirus outbreak should not be a reason for leaving Turkey alone in this subject. The deputy minister also spoke of the need to “update” the existing agreement with the EU and called for action by the EU as well as the Organization of Islamic Cooperation and the G-20 group, regarding financial assistance to Turkey.

At this point, Turkish media reported that a refugee named Ahmed Abu Emad was shot in the back by Greek soldiers while trying to cross into Greece from the Turkish border town of İpsala, and he died on the way while fellow refugees were bringing him to the Turkish border, and his body was taken to the morgue of a hospital in the nearby town of Enez.

Therefore, the Convention Relating to the Status of Refugees, adopted by the United Nations in 1951, grants every person on earth who is pursued in his homeland and whose life is in danger the right to seek asylum in another country. The EU was also a signatory party to this agreement. Greece, however, has repealed both this convention and the asylum law guaranteed by European human rights and constitutions for at least one month. Greece will not receive any asylum application for at least a month. It will impose prison sentences and deport those who enter illegally across the border. The decision is contrary to international conventions and to Europe's own constitutions and values. These developments undermine the image of Europe, as well as respect, trust and belief in European values. On the first day of the events, European Commission President Ursula von der Leyen took a plane to the border with Turkey together with European Council President Charles Michel and European Parliament President David Sassoli. Ursula von der Leyen oversaw the border from a helicopter over the Maritsa River together with Greek Prime Minister Kyriakos Mitsotakis and spoke like a commander-in-chief, saying: “Those who seek to test Europe's unity will be disappointed. We will hold the line and our unity will prevail.” She called the Greek government, which has inflicted violence on refugees, “our shield of protection” and pledged 700 million euros ($790 million) in aid.

She warned that Europe's support for a policy of vigorously protecting Greece's border would be a violation of international law. “The EU is fulfilling Trump’s dream of removing the right to asylum on the Mexican border and militarizing the border on the Greek border today,” said Gerald Knaus, a migration expert.

The basis of international refugee law is the Geneva Convention Relating to the Status of Refugees, signed in 1951. The convention defines a refugee as “any person who temporarily or permanently leaves the country of his nationality or place of residence, owing to a well-founded fear of being persecuted for reasons of race, religion, nationality or membership of a particular social group or political opinion.” The Geneva refugee convention, the Universal Human Rights Convention and Europe's own laws all secure the right to asylum.

Article 33 of the Geneva refugee convention assures that no one seeking asylum can be repudiated at the border and prohibits sending them to another country where they are in danger of being pursued.

The United Nations Convention on the Rights of the Child (UNCRC) stipulates that unaccompanied minors cannot be turned away at the border, while the Geneva refugee convention says: “The Contracting states shall not impose penalties, on account of their illegal entry or presence, on refugees who, coming directly from a territory where their life or freedom was threatened, enter or are present in their territory without authorization.”

Greece, however, has repealed these articles for at least a month on the grounds of “crisis.” No one will be able to apply for asylum during this time. Those who violate the border and enter the country will be sentenced to prison and deported.

The point reached today almost documents how the West tramples on human rights law when it is contrary to its expansionist interests.