Terrorism in Europe not Islamic but deceptive 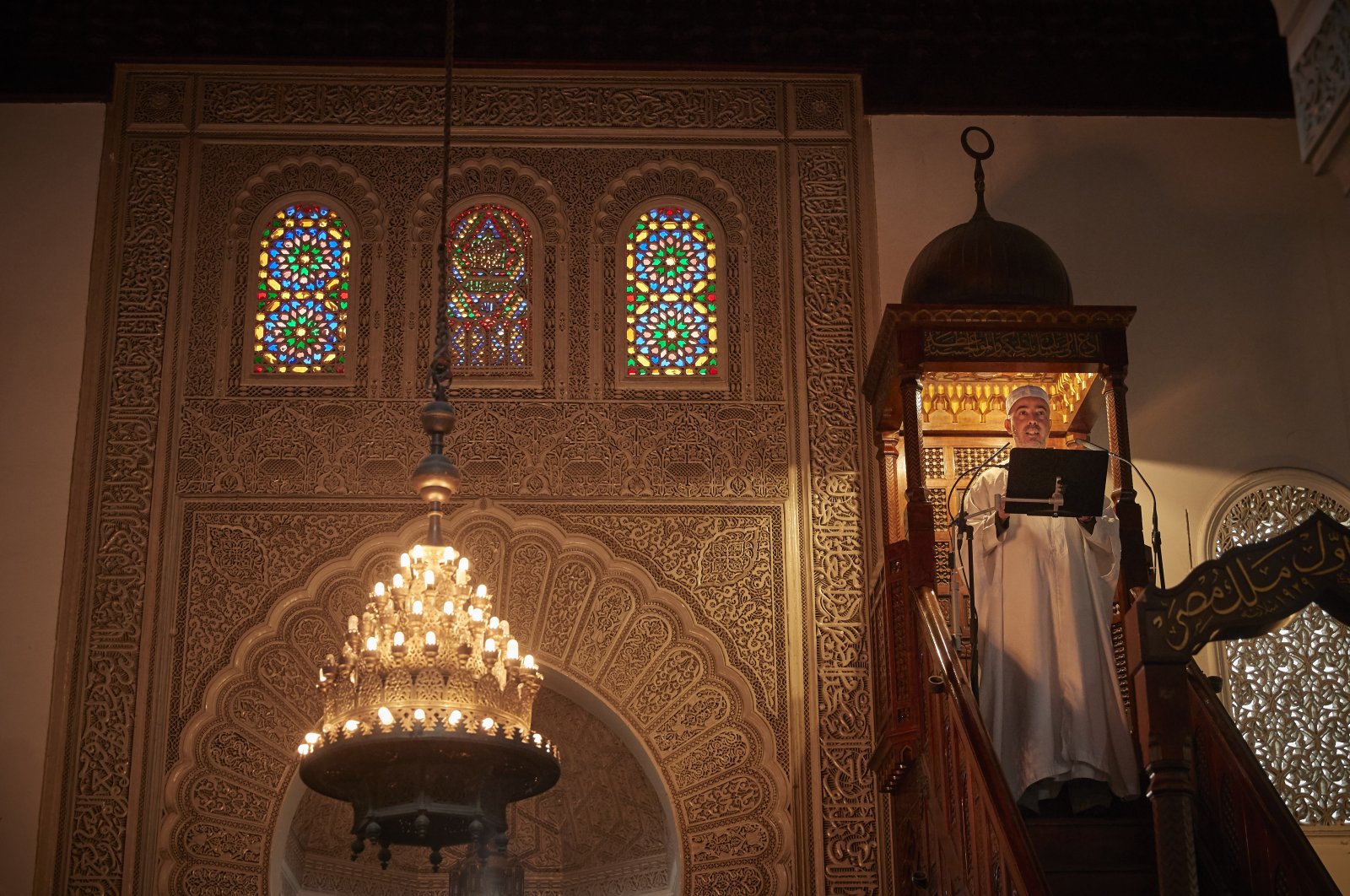 An imam reads a poem "For the Republique" as a homily to French Muslims in support of the French laws during Friday prayers at the Grand Mosque of Paris, Paris, France, Oct. 30, 2020. (Photo by Getty Images)
by Arshi Khan Dec 01, 2020 12:05 am
RECOMMENDED

Fault lines in the domain of knowledge have become common features in the contemporary world, be it the domain of intellectual, political or mass media which are bound to develop politics of subterfuge and deception. Such epistemological declines began with the explanation of human consciousness within the water-tight circle of the naturalistic description of Aristotle’s theory of nature, empiricism and experiences. The majority of Western intellectuals, institutions and media have developed a pattern of discussion and conclusions which somehow produce narratives that are circulated worldwide.

Western leaders, media, intelligentsia and their followers were prompt in highlighting the act of terrorism in France, Canada, Austria, Afghanistan and Mozambique, in the last few weeks and their media agencies linked terrorism with Islam. They linked the crimes of individuals to the Muslim community. They failed to condemn the absolute freedom of speech. The response to terrorism extended "institutional extremism" resulting in large-scale humiliations and search operations in Muslim localities in Western Europe. War on terrorism became a common ground in the West, but they remain silent over the violation of the rule of law and political responsibility.

European institutions are silent on the voices of the victims. The Western media and the governments have not highlighted the fact that since 2013, at least 1,700 French nationals joined the ranks of Daesh in Iraq and Syria.

The European narratives fail to question why Daesh and Salafis are given preference vis-a-vis public narrative on Islam. According to a report by Globsec, "European jihad" is to some extent criminal in nature, as a sizeable minority of its adherents, or 56 cases (28%) of those analyzed, have a history of a previous arrest (i.e., before 2015). They had earlier committed crimes including (violent) robberies, burglaries and thefts, illicit trade including drug dealing, trafficking of goods and fraud, violent crimes and terrorism-related crimes.

The report mentions that European extremists are not well educated. According to the report, only 20% have a high-school diploma, and just three completed undergraduate studies. Amongst the criminals turned terrorists only 8% attended high school.

Almost 64% (or 126 out of 197) of the individuals included in the dataset had first been exposed to a radical ideology more than six months prior to their arrest. This underscores the fact that a sizeable chunk of the European extremism milieu is composed of individuals with long records of participation in radical networks in Europe.

The report mentions 88 cases (45% of the total dataset) in which radicalization was instigated offline and only 19 individuals themselves sought radical exposure in an online environment.

The key offline domain was a prison. Around 54% of these prisoners were exposed to radical ideology for the first time while serving their sentences. This phenomenon is most prominent in France, Belgium, Germany and Italy.

Weeks before the killing of historian teacher Samuel Paty, French President Emmanuel Macron was denouncing Islam openly for political reasons. Under Francois Hollande’s presidency, the former French Prime Minister Manuel Valls seized on the terrorist attacks to advance an anti-religious agenda in the name of security.

For French public opinion, organizing Islam needs to be a security question. The 2004 law bans religious symbols in public schools and a 2010 ban on the full-face veil in public, and in January 2018, a ban on religious garb in the National Assembly. This seems to be a policy to stifle religious expression, identity and culture.

In an article published in The Atlantic, Paris-based scholar Karina Piser refers to Olivier Roy, a scholar of Islam and professor at the European University Institute in Florence, saying “We’re in the process of trying to organize a religion that concerns 6 million people in France, in order to prevent 200 of them from becoming terrorists. Can’t we see that it’s absurd?”

No organized Muslim group in any part of Europe has owned the murderers of journalists, teachers and others in Europe. The individual terrorists with objectionable backgrounds were under intelligence monitoring.

The feeling of disagreement, pain and anger of a Muslim on the offensive and contemptuous acts against Prophet Muhammad is quite different from the act of violence and terrorism. About 60,000 books have been written against Muslims and Islam in the last hundred years. Such kind of contempt has happened earlier also and the response was either condemnation or intellectual rejoinder.

Muslim scholars never subscribed to violence. Prophet Muhammad never justified violence for such contempt during his lifetime. Violence and terrorism as a reaction to contemptuous acts are of recent origin and they are being planned by the scriptwriters and directors of global terrorism.

Terrorism has become a powerful political tool for Islamophobia, Turcophobia and Muslim bashing. There are beneficiaries of terrorism since 2001, and they have been misusing the state-power against Muslims and their institutions in North Africa, Levant – the geographical area in the Eastern Mediterranean region of Western Asia – and South Asia.

Dozens of anti-Muslim militias are active in South Asia. The Western media has not bothered to research the background of such terrorism because a genuine investigation would probably present a different picture. Terrorism in Europe since 2001 has also benefited political parties, security and intelligence institutions to identify such crimes with Muslims.

Terrorism also benefited faith-based nongovernmental organizations (NGOs) in Europe to revive Christianity and radicalism within the Christian community. Such NGOs are also encouraged to expedite the conversion of Muslim citizens of Europe and the refugees. Religious radicalism existing in several Protestant variants has mixed with nationalism in some European countries and their acceptability among the secular-modernists is increasing.

The whole network of fighters in Afghanistan was part of the scheme of the U.S. and Saudi Arabia. It is like a film-show in the context of terrorism which is mostly known by the role of actors but the film itself is the product of “scriptwriters and directors” who do not appear on the screen. It is something like a nuclear threat in the Middle East, Iran automatically appears before the global audience.

For a long time, weapons of mass destruction (WMD) was scientifically identified with Iraq’s toppled late leader Saddam Hussein. Despite no serious efforts and investigations on the part of the U.S., 9/11 terrorism was tagged with those elements which were not capable of doing it considering their area of presence and influence. The scriptwriters and directors of 9/11 terrorism were deliberately ignored as their identification could have changed the course of world politics.

Terrorism in 2001 occurred in the U.S. where it has 6000 military bases in addition to a large number of bases overseas. A country which was capable of knowing the blend of a cigarette in the Middle East even before 2000, amazingly failed to detect terrorists’ presence and planning within its own security and commercial zones – the Pentagon and New York. It is no more a secret that the Sudanese had asked the U.S. government in 1996 to hand over Osama bin Laden – as he was there with his family and business workers – but the U.S. refused to get hold of Osama while he was still alive. On this refusal, the then U.S. ambassador to Sudan had resigned.

Similarly, the Pentagon satellite power had known each and every movement of Osama in Afghanistan after 1996 and his whereabouts – as Sudan had asked him to go after the U.S. – but no action was taken till 2011. This is why some very important Central Intelligence Agency (CIA) officials resigned in the late 1990s. These are some of the junctions which need to be explored to find the script-writers but there is an intellectual and academic silence over the issue. Had the truths surfaced, their narratives could not have prevailed. The post-2001 public narrative of terrorism was identified with Islam, Muslims and the Middle East which need to be addressed peacefully and academically to expose the cave of lies and deceptions.