The mourning process: How to cope with social trauma 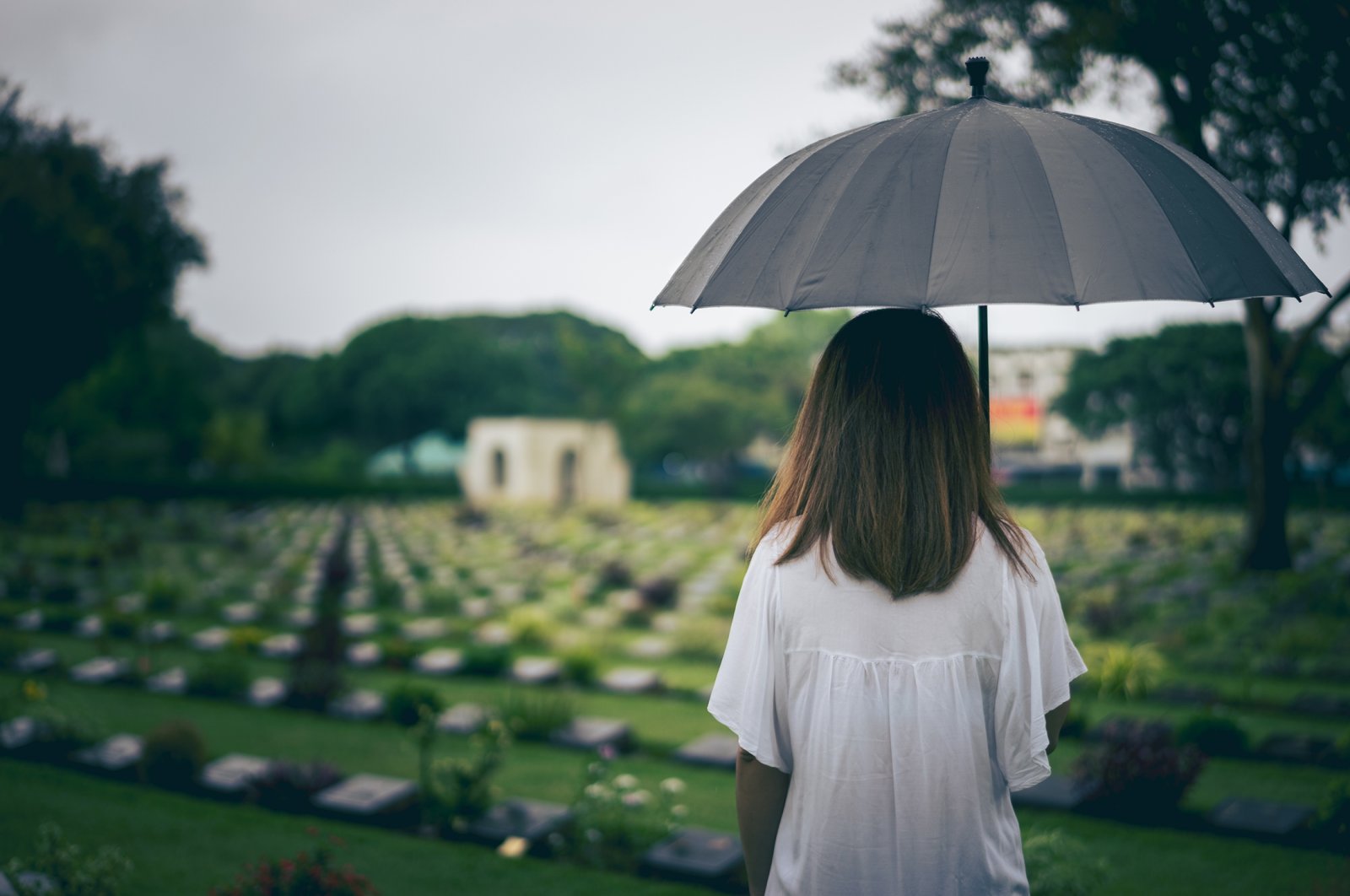 A young woman holds a black umbrella while mourning at a cemetery. (Shutterstock Photo)
by Şeyma Koçak Sep 20, 2021 12:05 am

When we experience loss, the event has an impact on us as individuals and also on our society. Recognizing social and individual grief and knowing about the process will help us cope with these feelings

Natural disasters such as floods, accidents and traumatic events such as ethnic or religious persecution and violence can threaten a person's physical and spiritual integrity. This kind of event is very difficult for an individual to cope with and comprehend. But the society around that individual, which functions together as a living organism, can also be hit hard and require some time to digest social suffering.

Social traumas can affect all segments of society that witness these events directly or indirectly, not just those who have been subjected to the trauma. Therefore, in such cases, the general community experiences feelings such as horror, helplessness, insecurity, pain, loss, anger, isolation or alienation.

Social trauma can shake society's self-perception, that is, its values, traditions and customs, its accepted beliefs in moral and human consciousness, and its perception and worldview of other communities. It deconstructs the bond between individuals and subgroups of a community.

"Death is the most tangible and most painful of losses. In our reactions to death, we unwittingly coexist with the remnants of our deconstructed, imposed or rushed divisions in our past in our subconscious. Mourning is not just a response to death. Mourning is the psychological response we give to any subduction or change and the compromises we make so that we can adapt between our inner world and reality. " says Dr. Vamik Volkan, an emeritus professor of psychiatry at the University of Virginia.

When a loved one dies, a person puts together their loved one's positive and negative characteristics and creates a representation of them in his mind. They add some of the characteristics of the person they love to their self, and creates a representation of themselves in their mind. Therefore, in your inner world, there are both representations of yourself and representations of the persons you love. In other words, your self and the other person are intertwined. Mourning means accepting that the loved one is dead, and this process allows you to separate your self and the other.

Mourning means slowing down the relationship with the representation of the loved one in the mind; in other words, it means saying goodbye in peace. The healthy farewell process is as follows:

In the denial stage, which is the first stage of the mourning process, the event or situation is usually ignored and unaccepted.

For instance, let's say the phone rang and the news came that a relative had died in a flood. The person's first reaction is bewilderment, shock and denial. He exclaims: "It can't be! No! It's not true!" He uses phrases as if talking about someone else, as if someone else had heard the news, as if the deceased was going to walk out the door any moment now.

When the denial mechanism loses its effect, a person has many emotions, most of which are regret and anger. A person regrets their attitude and behavior toward the deceased person in general. They use phrases like "I wish I hadn't left them home alone, I wish I hadn't insisted they visited me..."

Along with regret, the person has an intense sense of anger toward the deceased for leaving them.

Sometimes they direct their anger at an authority or a divine power, such as God or fate, and start to blame them for taking their loved one away.

What is healthy for them is to be able to experience and express this anger.

During this time, religious or traditional rituals are performed for the deceased. After a while, when each culture has done what it needs according to its system, it goes into a phase called bargaining.

They ignore the fact that there is no return from death. This phase ends with the realization of the reality of loss over time and the acceptance that no action can change it.

This stage is now the stage where one fully accepts loss, ends social rituals and remains alone with their feelings. The individual is overwhelmed with intense grief in the face of loss, experiences introversion.

In theory, the stages above are supposed to last six months to one year. However, in some cases, the period can last more than one year, depending on childhood experiences, type of loss, or losses that were put under the rug rather than properly mourned. If one avoids experiencing bereavement, the feeling of grief can continue throughout life.

What is healthy mourning?

Many may think of death when we say loss, but what is lost can also be a family home, a nut garden, a dream, a goal, a friend, a reputation, a job, a hometown or even an old self. This can be a healthy process if a person expresses and experiences their feelings, which include anything from anger, blame and resentment to regret and shame when the deceased or the thing/object they lost comes to mind. It is healthy for them to feel and express whatever emotion comes up. It is the only way that the brain can get the feeling out of its system after a while.

If it is difficult to face your feelings, but if it has been more than a year, and the grieving process still affects your functionality in life, it is vital to get professional support.

How common pain is shared is socially determined by the spiritual beliefs of a society. How different systems, organizations, structures and the state in the social structure behave in the face of a disaster and how they look at it determines the course of the mourning process of people who have been directly or indirectly damaged by trauma.

According to the nature and conditions of trauma, a sense of unity and solidarity can be strengthened. But sometimes feelings such as alienation and loneliness can intensify, both because the authorities responsible for security in society delay taking steps or do not take steps to heal wounds, and because of the frequent tension and conflicts due to provocations by groups that want to inflame society.

An increased sense of insecurity not only causes trauma victims to be traumatized again but also traumatizes those who have not been directly exposed to trauma. In cases where what has happened is ignored and not shared, a sense of confusion, intolerance, an inability to be sure of decency and tensions can arise in societies. During this period of tension, the distance between subgroups can increase.

Role of culture in repairing trauma

During the grieving process, it is necessary to express the feelings and questions held inside to go through the process in a healthy way. Culture has an important place in repairing social traumas. An individual's expression of their emotion by performing the rituals of the culture to which they belong (ceremonies, commemorations, lamentations or symbolic actions specific to the region in which they belong) contributes to the calming of their emotions. The path to recovery opens up when the person finds both a reliable source of information and an embracing environment to express himself so comfortably.

Throughout history, societies have cleared out their negative feelings, such as anger, grief, sadness and delay by creating monuments or representative mass graves to represent people/objects they have lost after traumas such as natural disasters, wars or genocide. So we can say that symbolizing and being in touch with these repressed feelings has a healing effect for people.