The century of climate change and natural disasters 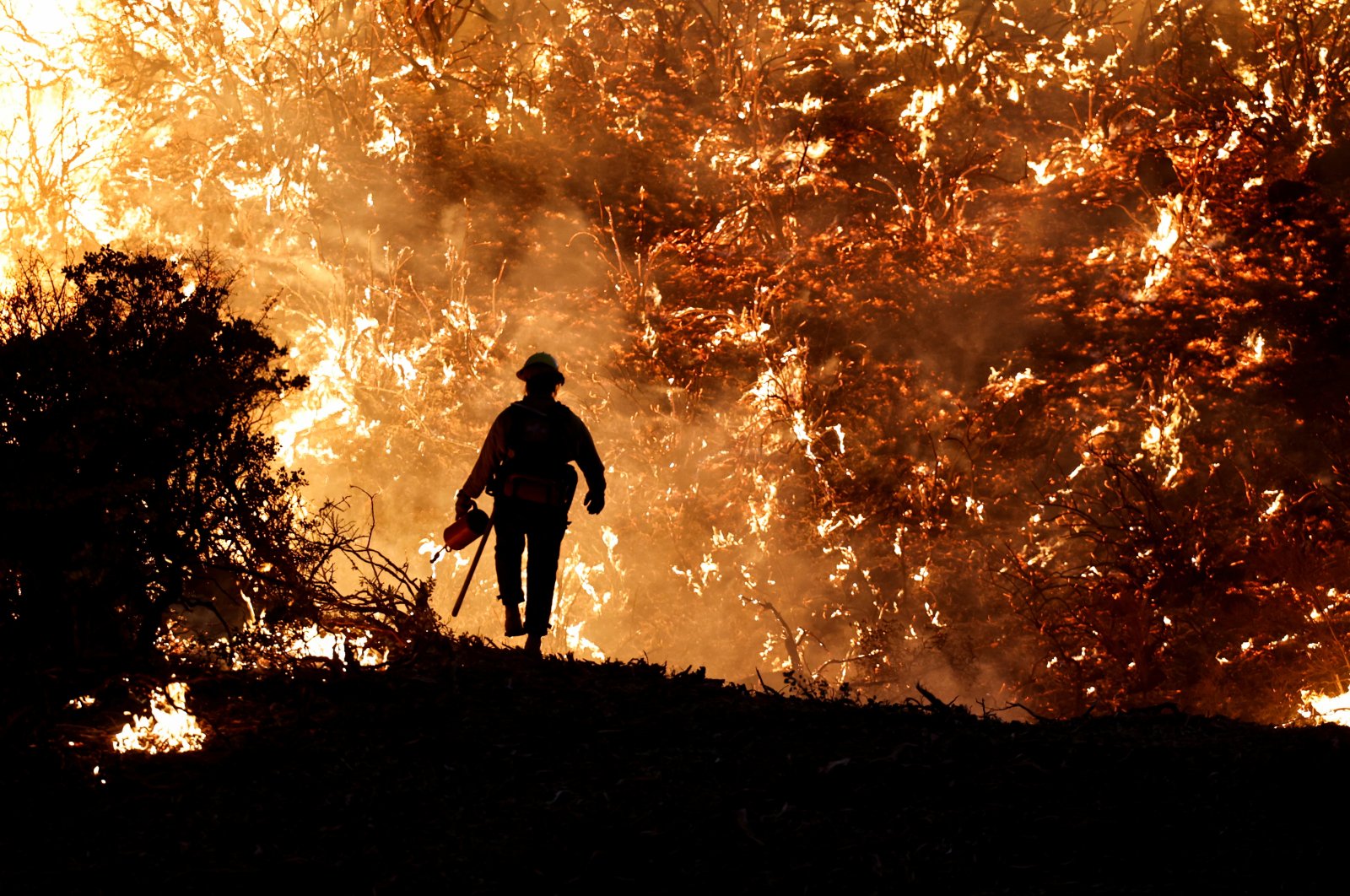 Every day that action is not taken condemns us to a future where natural disasters become part of our daily lives. A future, where we can save the world we live in, maybe possible, if we take immediate action

As we are still getting used to the new normal following the pandemic, the world is heading toward a new period in which the effects of climate change are becoming more pronounced than ever before. Are we prepared for this new era?

NASA's Fire Information and Resource Management System (FIRMS) distributes real-time data on active fires in the world. The red dots on the map showing the regions plagued by fires indicate that the blazes have spread to many parts of the world, especially in the past weeks. Even with quick research, we can see that many countries are still fighting fires. Most of North America and South America, Africa, the Mediterranean coasts, the Arabian Peninsula and Northern and Eastern Europe are currently fighting fires.

At the same time, floods are hitting multiple cities. The number of people who lost their lives due to the recent flood disaster in Germany increased to 157 while 31 people died in Belgium, with 163 people still missing. After fighting fires near the Mediterranean coast, Turkey is now trying to heal its wounds in the flooded areas of the Black Sea.

As social media posts starting with the words "pray for" are shared for a different country every day, people cannot decide which disaster in the world they should be upset about. In fact, countries often don't have time to respond to disasters in other regions of the world as they scramble to handle disasters within their own borders. The climate crisis, which most people have ignored until now, has started to show itself in the most brutal way.

On Aug. 9, the sixth assessment report of the Intergovernmental Panel on Climate Change (IPCC) was published. The results of the panel, attended by 234 scientists from 66 countries, are quite frightening.

The report predicts that forest fires and flood disasters will increase. The most striking point is that greenhouse gases, the cause of climate change, are generated by human activities. In other words, we humans are the cause of the natural disasters we are fighting right now.

While extreme weather events and disasters increase due to climate change, societies will face more extreme heat, famine, drought, flood and erosion in the coming years. If there is a 1.5 degree Celsius (2.7 degrees Fahrenheit) warming in the world's temperature, the summers will be longer and the winters will shorten. If the increase is 2 degrees Celsius, it is predicted that higher temperatures will affect agricultural production activities and cause many problems in terms of public health.

If major and serious measures are not taken urgently regarding greenhouse gas emissions, it will not be possible to keep the increase in warming at 1.5 or even 2 degrees Celsius. While the report says sea levels could rise by as much as 2 meters (6.56 feet) by the end of this century, in all scenarios considered, the Arctic is likely to be nearly ice-free at least once in September before 2050.

If the temperature increase exceeds the 1.5 degree Celsius threshold, the world will be facing risks that we cannot even imagine. However, the issue of climate change and global warming is still not a reality accepted by everyone. There are still deniers and people who are unaware of the seriousness of the matter.

Why does global warming occur?

In recent years, snowstorms and harsh winters called "snowmageddon" have paralyzed life in America and are occurring much more often. We started to feel the extreme cold with a sudden decrease in air temperature, which was sometimes above the normal level.

While all of this is happening, some may ask why we are experiencing such harsh winters because of global warming. Throughout history, such extreme cold weather has had a certain effect. However, this situation is different now because these extreme winters are happening very often. So what is the reason behind these waves of cold weather having such an effect?

The cold winds at the poles are trapped within the polar vortex. For this reason, under normal conditions, those cold winds do not descend to southern latitudes. The airflow that prevents their movement to these latitudes is the jet stream. In other words, we can define the jet stream as the path separating the cold air in the polar region and the warm air in the middle latitudes.

With the weakening of the polar vortex due to the warming experienced by the effect of climate change, the shift of the path of the jet stream to lower latitudes has caused the cold air to descend to southern latitudes. In other words, the reason behind these cold temperatures is global warming.

However, global warming is still seen as part of the distant future, a disaster scenario that will never hit our world. However, it should be the most urgent issue on our agenda because of the great changes that it will cause in our daily lives.

Climate and weather are important factors that affect our daily lives. In the busy days of the modern world, thanks to the tools of technology that make our lives easier, we have forgotten the importance of the climate. For a person living in the city and a farmer in the countryside today, the expected rainfall during the year does not mean the same thing.

However, the effects of climate change on societies will put climate at the center of our lives. Throughout history, civilizations have been shaped by climatic conditions. This relationship continued in harmony with nature and obeying the laws of nature until the Industrial Revolution in the 18th century.

After this breaking point, when the relationship between society and nature changed, nature was forcibly altered by humans. And if radical measures are not taken today, these changes will be devastating. Since this change will have a social dimension, social scientists are also working on the subject. Studies of possible scenarios show that we will face a lot of regional and global problems.

Many problems such as natural disasters, great difficulty in accessing clean food and water, possible ecological migrations and security will be the most fundamental issue in the coming years. And the question now remains, how should we prepare ourselves for this future?

The issue of migration and refugees is already on the agenda of all countries. For centuries, for various reasons, people have migrated from one region to other, safer areas. War, famine and natural disasters are among the leading causes.

However, with the work of social scientists in recent years, a new concept of refugee will begin to enter our lives. “Climate migration” will be one of the main problems in coming years.

Another problem that will arise with famine, water shortage and displaced masses will be "security." The security problems created by these displaced masses will pose a danger to states. The decrease in clean water resources reveals the possibility of water wars in the future. All of this may sound like the scenario of a dystopian movie, but a 2 degree Celcius increase in the world's temperature can make all this our reality. And, unfortunately, the expected increases in the future are more than 2 degrees Celcius. We are very lucky right now that we are experiencing the coolest summer of the rest of our lives this summer.

Can we adapt to climate change?

While many have previously focused on how we can reduce this change, more recently people have started to ask the question of how we can adapt in the face of change. According to the 2014 IPCC, adapting to climate change is "to adapt to the actual or expected climate and its effects."

Societies have been shaped and transformed in the face of changes for centuries and have survived without being defeated by these changes. However, the change that awaits us in the not-too-distant future is a global change and threatens all resources of society. Therefore, quick action can lead us to a better future. We know that every individual in society will be affected by the consequences of this change, but not everyone will be affected equally. This raises the question of how fair the consequences of climate change will be. Research shows that underdeveloped states will face problems more ruthlessly. Island states, on the other hand, will not even be affected economically or socially because the rising water level will directly destroy the inhabited areas of those states.

Likewise, studies show that women will be affected more than men by the conditions that climate change will create. In other words, it is not possible to deal with this issue only as an ecological change because we will face many resulting social problems. Furthermore, the societies with the least impact on global warming will face these problems more.

In fact, climate change is not a matter of the present. The climate has always been in a constant state of change. The fact that this situation reveals the necessity of creating a global alarm is that these changes have begun to occur in very short periods and are created by human beings rather than naturally occurring.

Since we started to see nature as a commodity in the consumption frenzy, the harmony that existed between us and nature began to deteriorate. This disharmony first harmed nature, and now it is starting to affect us.

Every day that action is not taken promises us a future where natural disasters are a part of our daily lives. Among the possible disaster scenarios, a future where we can save the world we live in may be possible – if we take immediate action.