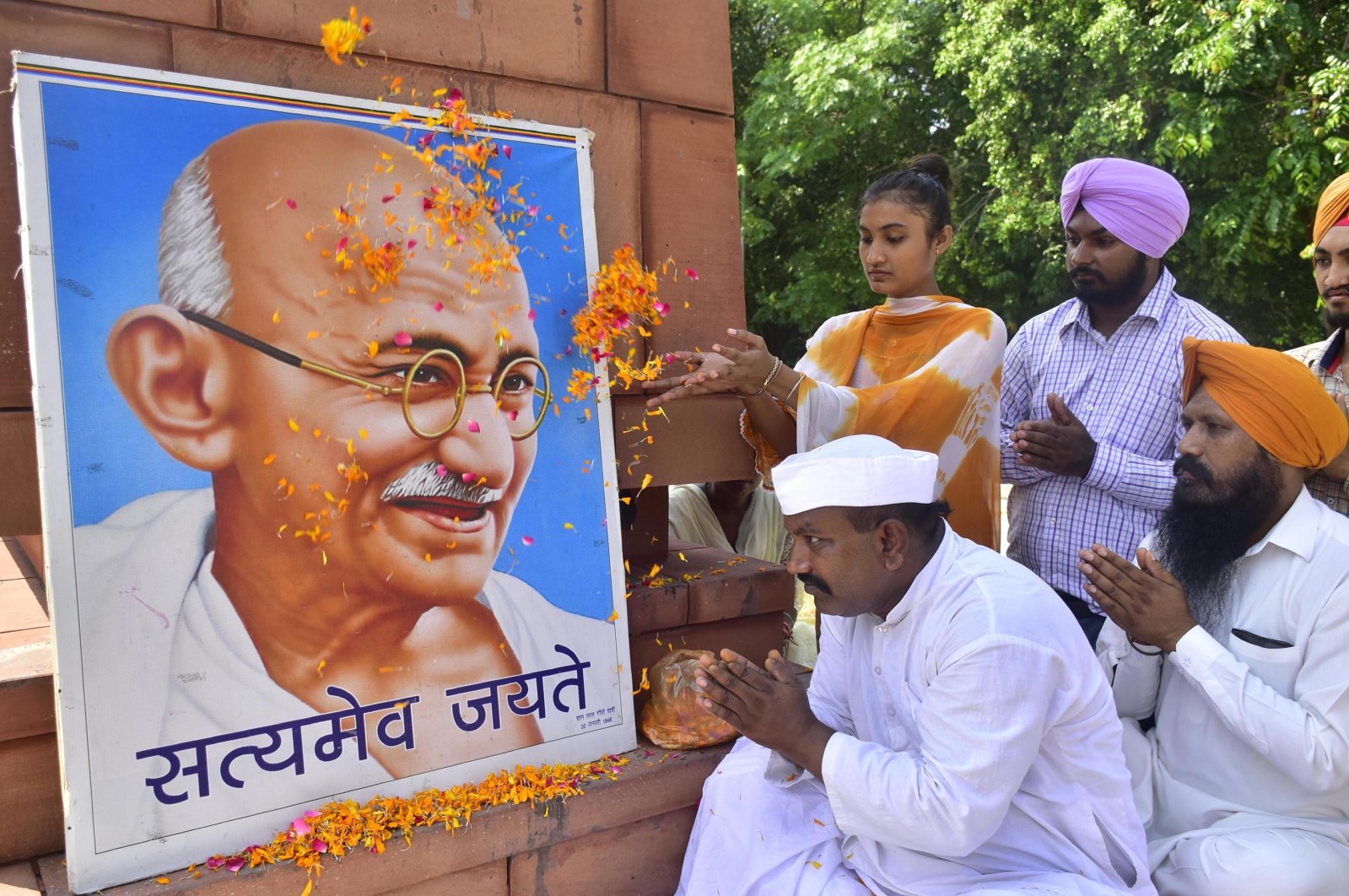 Social worker Shyam Lal Gandhi (L) and others pay floral tribute to Mahatma Gandhi on the occasion of the anniversary of his birth, Amritsar, India, Oct. 2, 2021. (Photo by Sameer Sehgal/Hindustan Times via Getty Images)
by Omair Anas
Oct 04, 2021 12:05 am

Bernard Houghton, a British colonial-era civil servant, was known for being critical of British imperialism while serving the empire in the Indian subcontinent. Interestingly, the Khilafat Movement, a pan-Islamic political protest campaign launched by Muslims of British India, was his main reference point in explaining why Britain's India policy was doomed to fail.

He had observed, "apart from these dissensions, the Khilafat agitation has illuminated the growing sense of unity between Hindus and (Muslims). The future of the Khilafat is a purely religious question; it interests, moves and inflames only the followers of Islam. Yet the Hindus have throughout sympathized deeply with their fellow citizens; they have supported them, helped them, indeed have acted almost as if it were a tenet of their religion which was at stake." He had warned the British government that "it was no longer possible to govern India on the principle of divide and rule, to play off (Muslim) against Hindu."

As India commemorates the 152nd anniversary of the birth of Mohandas Karamchand (Mahatma) Gandhi, Turkey, too, remembers his unforgettable contribution to its struggle for independence. It is impossible to recall Turkey's anti-colonial struggle without mentioning Gandhi's support for the unity and integrity of the then-crumbling Ottoman Empire.

Initially, Britain wanted to use Turkey to hold Tsarist expansionism in check by asking Turkey to help Indian security in Afghanistan and Central Asia. Against that backdrop, Indian politicians and activists had been actively engaged with Turkey. Once the Russian threat was over and Britain started conspiring to dismember the Ottoman Empire, Indian politicians and Turkey found a common cause against British rule.

The eruption of the Khilafat Movement was neither sudden nor just a religiously-inspired question. Gandhi, in his autobiography, explained why he chose to support the Khilafat Movement: "Friends and critics have criticized my attitude regarding the Khilafat question. Despite the criticism, I feel that I have no reason to revise it or to regret my cooperation with the Muslims. I should adopt the same attitude, should a similar occasion arise."

Not just that, he viewed the question of Khilafat more as political than a religious question and urged non-Muslims – Hindus – to support the Khilafat Movement.

In his autobiography, Gandhi said, "If the Khilafat question had a just and legitimate basis, as I believe it had, and if the government had really committed a gross injustice, the Hindus were bound to stand by the Muslims in their demand for the redress of the Khilafat wrong."

While addressing some concerns on whether the Khilafat Movement is only about religious politics, Gandhi wrote, "As time progressed I found that the Muslim demand about the Khilafat was not only not against any ethical principle."

"War of Independence," a book published by the Turkish Foreign Ministry on the occasion of 50 years of the Turkish Republic, carefully mentions that Muslims and non-Muslims had stood together with Gandhi by supporting Turkey financially and putting pressure on the British government.

On the other hand, while supporting the Khilafat Movement, Gandhi asked his Muslim followers to abide by the principle of nonviolence in all of their struggles. He had gotten a resolution passed by the Khilafat Movement on adhering to the principle of nonviolence. He had long deliberation with Hakim Ajmal and cleared his skepticism on the practicability of nonviolent noncooperation, on which Gandhi wrote, "Hakim Ajmal threw himself into its heart and soul, and his help proved invaluable to the movement."

In his detailed discussions with Islamic scholars and the leaders of the Khilafat Movement, such as Maulana Abdul Bari, about the extent to which a Muslim could observe the rule of nonviolence, Gandhi wrote, "in the end, they all agreed that Islam did not forbid its followers from following nonviolence as a policy, and further, that, while they were pledged to that policy, they were bound faithfully to carry it out."

Among all anti-colonial struggles being fought anywhere in the world, the idea of nonviolent struggle first appeared in India and was employed by activists. Particularly, Muslims agreeing to the principle of nonviolence was altogether a new political experiment in the history of Islam and the history of the world.

When the prominent writer and Turkish revolutionary Halide Edip visited India in 1935, she closely observed the impact of the Khilafat Movement on the unity of Hindus and Muslims. Her observations matched with Gandhi's real intentions when she said, "No one outside India can realize the sacred emotion which swept over all India by the mere fact of complete unity between the Muslims and Hindus."

The famous poet Muhammad Iqbal himself had chaired the speech of Halide Edip at Jamia Millia Islamia. As noted, historian Mushirul Hasan calls Jamia Millia Islamia a representative of Gandhian thoughts and philosophy. The university founders were all Gandhian and worked with him in the Khilafat Movement.

It is not surprising that Gandhi had managed to use the Khilafat Movement to strengthen the anti-colonial movement and unite Hindus and Muslims for the common cause of India's independence. At the same time, when some events of the Khilafat Movement turned violent, Gandhi reminded his Muslim followers to stick to the principle of nonviolence if they wanted his support.

Gandhi's interest in the Khilafat Movement gradually changed and he conspicuously abstained from the Karachi Khilafat Conference of July 1921. As Turkey's new ruler Mustafa Kemal Atatürk decided to abolish the Caliphate, the agitated Indian Muslims demanded that Gandhi send a delegation to Ankara. Gandhi was pragmatic enough to recommend Indian Muslims be more realistic. Gandhi's principled positions toward Turkish events, from supporting the Khilafat Movement to the recognition of the Mustafa Kemal-led new government, were acknowledged equally by the late Ottomans in the 1920s and the Kemalists of 1930s. Turkish intellectuals remembered Gandhi not just as an Indian hero but also as a person who had influenced a generation of idealists who believed in the principles of nonviolence (Ahimsa) and passive insistence (Satyagraha).

Besides the translation of Romain Rollands' series on Gandhi in 1923, Hasan Şükrü's article "Gandhi: The Voice of India" (Gandhi: Hindistan'ın Sesi) was published in 1930. None outside India might have captured the essence of being Gandhi better than Halide Edip. During her stay in India in 1935, she met Gandhi several times and spoke to his followers and supporters. She couldn't find enough words to define Gandhi, "the alternative great man, who also represents an aggrandized type of the ordinary man, is Buddha, Christ ... and to those belongs Mahatma Gandhi. But they belong to such a remote past that one wonders whether they were ever on earth. No one in our age, or since the days of saints and prophets, has taken the fancy of the masses, because of his resemblance to the good, to the loving kindness of the ordinary man."