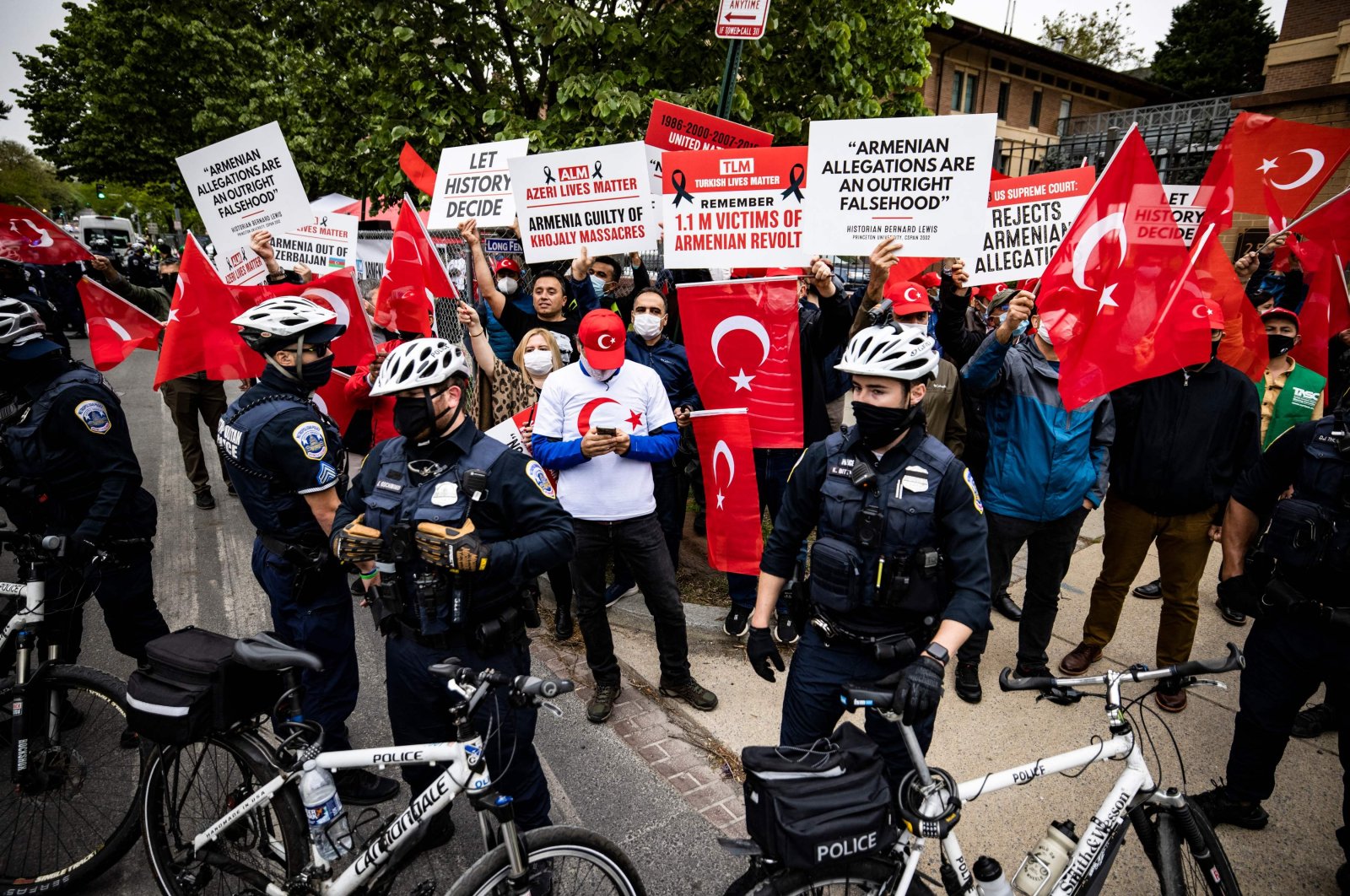 Turkish protesters are kept separated from Armenian protestors to avoid confrontation in front of the Turkish Embassy on the 106th anniversary of the 1915 events, in Washington, D.C., U.S., April 24, 2021. (AFP Photo)
by Cenk Kaan Salihoğlu Apr 27, 2021 12:05 am
RECOMMENDED

On April 24, U.S. President Joe Biden recognized the 1915 events as "genocide." Considering the U.S.' aggressive foreign policy as of late, this move does not come as a surprise at all.

In recent years, there has been an increasing trend in the West to verbally attack Ankara and engage in populism – indicating that the West perceives Turkey as a threat.

It is true that Ankara's reforms and investments in its national defense industry have made the country more powerful today than ever before. However, this does not make Turkey a threat to the world.

If the West paid sincere attention to the Turkish strategy, it would understand that Ankara is open to the world, offering great commercial, investment and military advantages.

In other words, by allying with a stronger Turkey, the West could strengthen its position in the geostrategic balance of the entire Middle East, for example.

However, these NATO "allies" attempt to weaken Turkey both economically and politically while destabilizing the region. Take the U.S. for example, the globals arms lobby and U.S. establishment prevent the White House from following a rational foreign policy in the existing multipolar world.

The incumbent U.S. president even once said that he would overthrow President Recep Tayyip Erdoğan with the help of the Turkish opposition following the July 15 coup attempt by the Gülenist Terror Group (FETÖ).

The situation is similar in Greece. Taking advantage of the conflict between Ankara and Athens, the U.S. is expanding in Greece by opening new military bases.

While Greece thus becomes a U.S. pawn, Turkey faces a military threat from its Western border. This is also how Washington came to open a naval base in Western Thrace, 30 kilometers (18.5 miles) from the Turkish border.

Therefore, when taking into consideration the current situation in U.S. foreign policy, it is not surprising that Biden officially recognized the alleged genocide. But can a state in principle recognize an alleged genocide?

Although the U.S. and several European states have so far declared that there was a genocide against the Armenians, these declarations are void ex tunc.

Simply put, it is not for any political authority to pass judgment on genocide as politicians and state institutions lack the necessary expertise and legal authority in this regard. This can be clearly seen from the European Court of Human Rights' (ECtHR) judgment in the case "Switzerland vs. Perinçek" (27510/08).

While the ECtHR allows for open discussion of the topic, it also affirms that only an international criminal court can pass judgment about whether an event can be classified as genocide.

It is also clear from the judgment that there was no evidence to authenticate the alleged genocide against the Armenians, nor did an international criminal court confirm the charges.

Consequently, the ECtHR proved in its ruling that the Armenians were not subject to genocide at any point.

Despite this decision, some Western parliaments and presidents continue to accuse Turkey of having committed genocide against Armenians, which clearly shows that the aim is to weaken Turkey.

Now, the West's next step could be to demand reparations or territories from Ankara as compensation through a judicial process.

Yet, the ECtHR's ruling, as evidenced by numerous documents in the archives, prohibits such a step. Accusations do not automatically become reality solely based on one state's recognition.

Despite the ECtHR's ruling, Ankara has even offered to open its archives and establish an international committee to examine the genocide claims. But Armenia has repeatedly rejected this offer.

If one listens to the first Armenian president, Hovhannes Kajaznuni, one can understand why Armenia is against this proposal.

Kajaznuni once said that there was only a conflict between Turks and Armenians, which the latter instigated to establish a "Greater Armenia" with the promised support of the West in 1915, but there was no genocide.

According to him, Armenians murdered countless Turks to achieve this goal and the Turks were only defending themselves. Thus, opening the archives will reveal that the genocide did not take place.

In fact, it is quite the contrary. Turks were systematically killed in the name of Greater Armenia. As a result, Yerevan would have to apologize to Turkey for the accusations.

Based on this evidence, Ankara should entirely reconsider its foreign policy toward Washington given that the U.S. fails to act as an ally and attempts to besiege Turkey by all means possible.