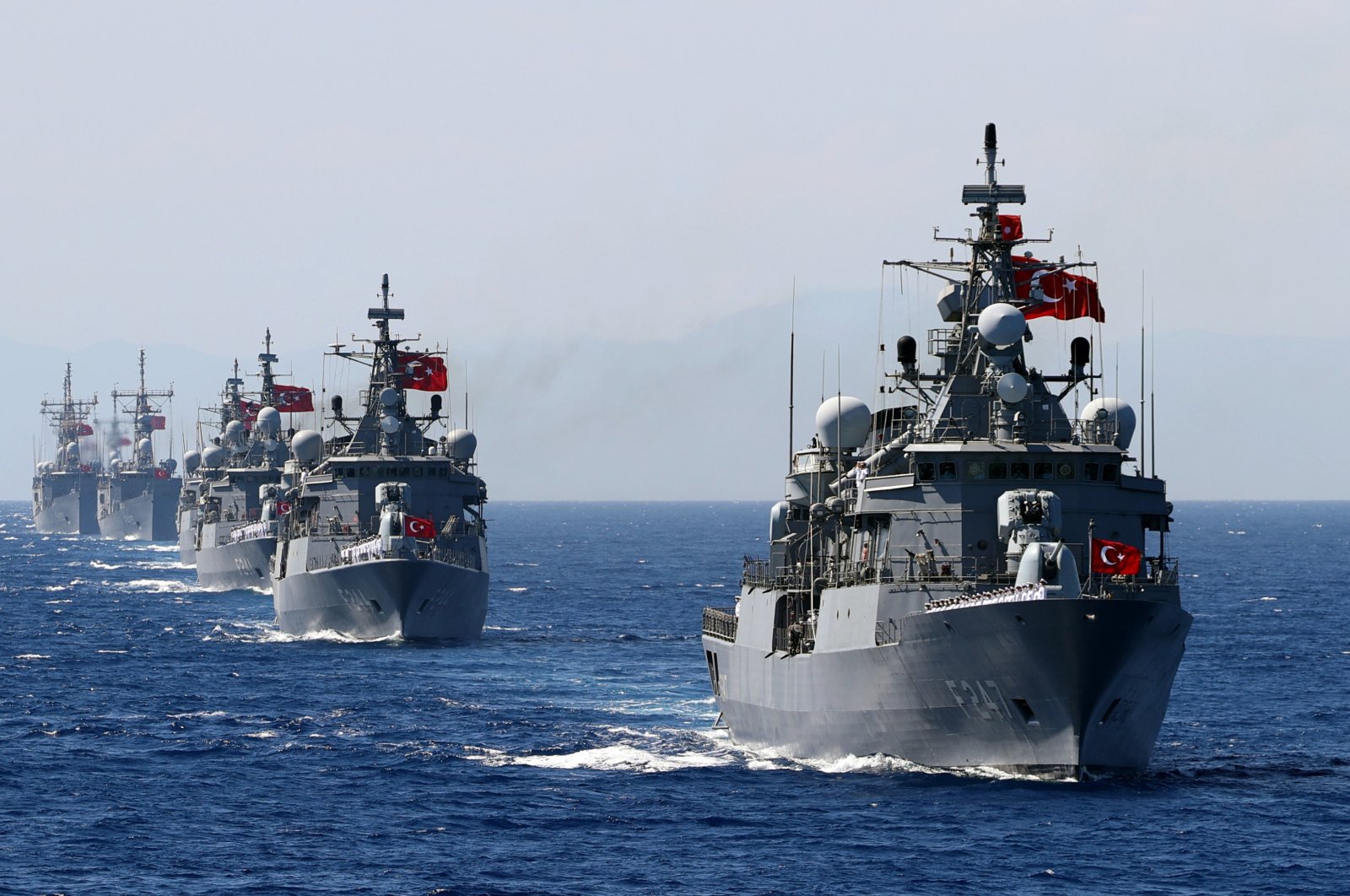 A general view of a military drill conducted by the Turkish Naval Forces in the Mediterranean Sea, June 7, 2021. (AA Photo)
by Cenk Kaan Salihoğlu Dec 28, 2021 12:05 am
RECOMMENDED

In previous articles, I have pointed out that Turkey needs to focus more on the sea. In those articles, I addressed the doctrine of the "Blue Homeland," which Turkey uses to protect its waters in the Black Sea, Aegean and the Eastern Mediterranean.

For Ankara, its territorial waters are indispensable from an economic, geopolitical and security perspective, as Turkey is a peninsula and can be reached by sea from three directions. This makes the maritime defense industry even more important. Its importance stems primarily from the increasing military activities of France, the United States and Greece in the Eastern Mediterranean; the associated threat to the Turkish Republic of Northern Cyprus (TRNC) and Anatolia; the lack of recognition of Turkish maritime territories by the West; the legal dispute in the Aegean Sea over numerous islands and territorial waters; and the natural gas dispute in the Mediterranean with the states of the East Mediterranean Gas Forum, especially with the Greek Cypriot administration. For this reason, Turkey has renewed its maritime defense industry in recent decades, expanding its capabilities and becoming a leader in this field.

This article presents details about Turkey's most innovative products in naval matters. These are mainly underwater systems and products, though they are also being considered for surface vehicles, which are equally important for submarine defense and underwater warfare. Today, underwater systems are more important for dominating the seas than predominantly surface platforms and ships, as was the case until the end of the 20th century.

Standard equipment such as frigates and submarines, which Turkey now also manufactures as part of its MILGEM (National Ship) project, will not be discussed here. The article intends to provide an overview of the latest high-tech subsea products on the market. However, it should be noted that Turkey has now produced its first unmanned water vehicle prototype equipped with weapons, which is a revolution for surface naval products, following the country’s special focus on autonomous surface and underwater vehicles.

To maintain professional standards for this article, I also spoke with my friend, Hakan Başaran, an ex-naval officer, former director and current board consultant for one of Turkey's largest defense companies, via Zoom several times, and learned the following about the latest developments in the Turkish maritime defense market: Turkey is one of the few countries globally that produces innovative high-end subsea products for its navy. The advantage of these products is that they are less expensive than comparable products on the global market, up to threefold cheaper than other options, in fact, offering customers an exceptionally high return on investment. For this reason, in addition to the Turkish navy, foreign states are also showing increasing interest in Turkish defense products, and not only NATO allies, but also Eurasian, Far Eastern states and countries on the Arabian Peninsula.

It is worth briefly discussing at this point the benefits of procuring national products for the Turkish navy, as it mainly affects and benefits the economy, politics and technology.

In relation to the economy, the navy's acquisition of national products makes a significant contribution to Turkey's gross domestic product (GDP) by increasing money in circulation, raising national income and curbing foreign debt.

Politically, domestically produced technology is essential for security and defense independence. Turkey would thus not have to rely on subsequent arms imports or maintenance by foreign companies, which could be denied depending on the geopolitical interests of the exporting country. A good example, though not entirely pertinent, is the Patriots missile defense system that the U.S. recently refused to sell to Turkey.

Most importantly, however, the testing of Turkish maritime products takes place in the Mediterranean and the Black Sea and can therefore be used instantly and accurately by the Turkish navy. For maritime products, it is important where they have been tested and in which waters they are to be deployed so that they can be used properly.

But what high-tech subsea products do Turkey and its navy have to offer? During our conversation with Başaran, the following products caught my eye as they offer great advantages to the Turkish navy and make it unique in the region.

It is one of the most critical systems a submarine needs in the event of an accident or incident. The sonar beacon system is activated and serves as a distress signal by transmitting sonar signals in the event of an emergency. These signals communicate the exact position of the submarine to ships and rescue units in the area. The acoustic detection and monitoring system in turn detects the signals from sonar beacons and locates submarines on the seabed or underwater wrecks of downed aircraft in emergencies.

It provides fast, secure, reliable and uninterrupted ship/submarine-to-ship and ship-to-shore communications via radio and teleprinter lines, enables compliant message exchange and allows interception of one-way transmissions. The underwater telephone, on the contrary, is a microprocessor-controlled system that allows communication between submarines and ships through underwater sound waves.

This product creates acoustic signals attached to underwater platforms or weapons to detect the presence of surface platforms based on their wake. It is done by using the wake in the form of micrometer-sized air bubbles generated by the propeller and hull cavitation of surface platforms that may reach a certain depth and are detected by the system.

These are used to identify divers and underwater vehicles that use the cover of water for hostile acts such as espionage, assassination and kidnapping. This product is a series of high-frequency sonars that automatically detect, track and classify intruders, and alert security personnel.

With the mentioned maritime systems and others that are under development or classified and therefore cannot be discussed here, Turkey is well on its way to becoming a great power on the seas able to protect its interests, especially in the East Mediterranean. It is also able to provide its allied and strategic partner states in Eurasia and on the Arabian Peninsula maritime products while also strengthening its economy.

That the "Blue Homeland" doctrine is gradually finding momentum is proven by the facts mentioned in this article and the perspective outlined by Başaran during our conversation. It is even more important that actors who question Turkey's strength in the Eastern Mediterranean take note of these facts.