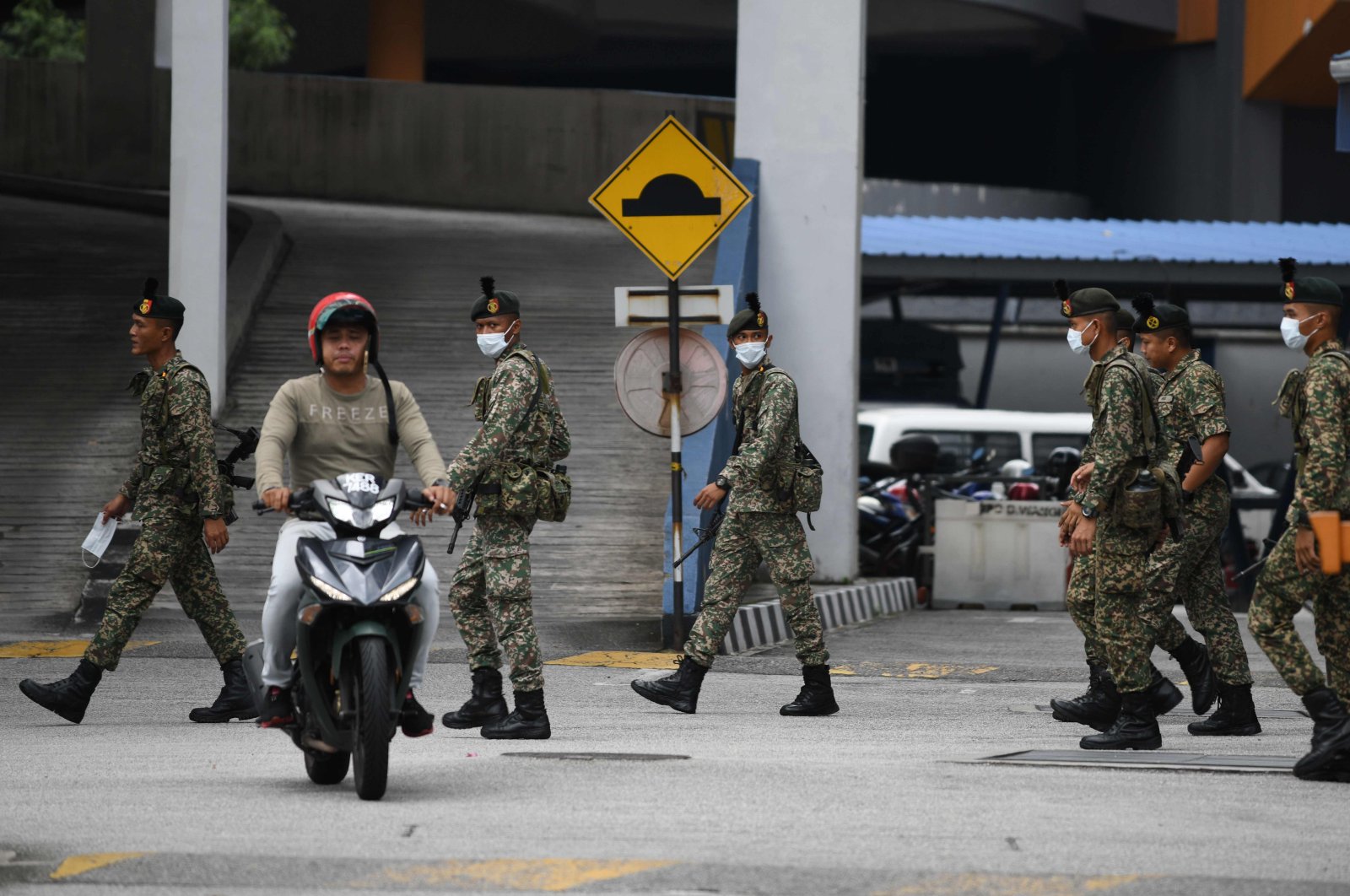 A motorcyclist rides past soldiers wearing face masks inside a police station during the control of movement in Kuala Lumpur amid fears over the spread of the coronavirus, Sunday, March 22, 2020. (AFP Photo)
by Muhammet Ali Güler Mar 23, 2020 12:05 am
RECOMMENDED

In February, Malaysians witnessed the beginnings of short-term political turmoil, as the Pakatan Harapan government led by Dr. Muhammad Mahathir collapsed following the latter's resignation. Abdullah Ahmad Shah, the sultan of Malaysia, followed this with a crucial decision in awarding the prime ministership to Tan Sri Muhyiddin Yassin in an act designed to prevent further political uncertainty.

In addition, with the then-looming threat of the contagious coronavirus that causes the disease COVID-19, this act by the sultan could have very well saved thousands of Malaysians who could have fallen sick if political parties began another electoral campaign.

The will of the people indeed provides the basis for the election of leaders and the approval of any decision in a democracy – but at the same time, it is vital to have alternative entities to make necessary decisions in the face of domestic, regional and global threats.

Malaysia has a system such that even if no party is in office, the strength of its institutions allows for the country to functionally operate. This is something that many countries across the globe lack.

What about the decision?
Personally speaking, the sultan’s decision was logical given that the global outbreak of COVID-19 had already harmed economies worldwide and exacerbated political issues in several countries. In addition, the effects of the virus had already instilled a social and psychological impact on the public.

Mahathir and Anwar Ibrahim, once seen as rivals, joined forces to defeat Barisan National, which was led by Prime Minister Najib Razzak from 2009 to 2018.

The trials of Razzak and his wife on several charges, including corruption, are still ongoing. Following the Pakatan Harapan (PH) victory in the 2018 elections, Malaysians from various parts of society expressed a wealth of opinions and perceptions.

For some, there was the hope that Malaysia would be better economically and politically with the PH. There were other groups who expected harsh punishments to be handed down to members of the previous ruling party. For instance, I was staying with an old lady who was my tenant. She expected to see previous leaders from the Barisan National coalition jailed for good. Moreover, there were also those who predicted that the PH would collapse due to the competing political and economic approaches of the component parties in their coalition.

Malaysia is a multicultural country whose main components are made up of the Malay, Chinese and Indian communities. Therefore, many experts identify religion and race as tools in Malaysian politics. According to Khairy Jamaluddin, the minister of science, technology and innovation, identity politics will always exist in Malaysia.

The discontent of Malays and some component parties, in this case, the Malaysian United Indigenous Party of the PH coalition, regarding the Democratic Action Party (DAP) has paved the way for its collapse. One Bersatu Youth representative described the DAP as arrogant. Even now, there are still ongoing discussions in regard to how power has shifted from a majority party to a minority one.

Speculations and claims – like Mahathir and Anwar being eager to work together for the third time, or the two being guilty of causing the collapse – are increasing. The PH was backing Mahathir for the premiership even after his resignation. However, in today’s political landscape, it is Anwar Ibrahim who is claiming the leading role for the opposition.

The other narrative that has led to the collapse of the PH government is the divergence between Mahathir and Anwar over the transition of power to the latter.

According to some, Mahathir felt pressured by Anwar and his supporters since, at the beginning of their collaboration, it was agreed that Anwar would be handed the prime ministership from Mahathir after two years. However, this did not see fruition.

Another claim made by certain groups was that Mahathir was bluffing and that he had every intention of occupying the post for the full term. His goal, some say, was to halt the opposition inside the PH against the leadership of Anwar. Hence, his alleged bluff was in vain due to his unexpected resignation.

On the side of the new government

The new Perikatan Nasional government under the leadership of Tan Sri Muhyiddin Yassin has been at the wheel of the nation since the latter's appointment as the country's eighth prime minister. The prime minister has already appointed his cabinet members, which has been considered a “predominantly Malay cabinet.” The new prime minister is working with the United Malays National Organisation (UMNO) and the Malaysian Islamic Party (PAS), two political parties that are deep-rooted in Malaysia’s political landscape. The PAS has been active since 1951, while the UMNO was the leading party of the Barisan Nasional coalition that ruled Malaysia for over 60 years, until the general elections in 2018 when it was defeated by the PH.

Yassin has denied allegations of being a "traitor" while, at the same time, claiming he took the position in order to put a halt to the ongoing political crises. He promised to investigate corruption and promote good governance. He asked Malaysians to give him a chance when he said, “Let's rebuild our country and restore its glory together with me." According to some groups, he is a "Malay first" prime minister, despite clarifying his own role as a premier for all, including Chinese and Indians.

There are also rumors that Yassin may ask Mahathir to become a consultant. If this is true, then the prime ministership of Yassin would be seen by many as having been legitimized. This legitimacy may secure Yassin’s office until the next general election.

The hardest duty for Malaysia’s new prime minister is to curb the spread of COVID-19 in Malaysia. This will be a grave test for the new prime minister in proving his leadership ability at a very critical moment amid a political atmosphere in Putrajaya, where criticism for his defection from the PH is still harsh. For example, Khalid Samad, a member of the National Trust Party, called Muhyiddin out as a traitor of the PH, claiming that he could very well also betray the PN.

Personally speaking, the only thing I want for Malaysia, without favoring any political side, is that the country builds the strength to battle the crises that are currently ongoing.
* Ph.D. candidate in international relations at the University of Malaya, Malaysia