US bad, China good: How anti-imperialism is perceived in Turkey 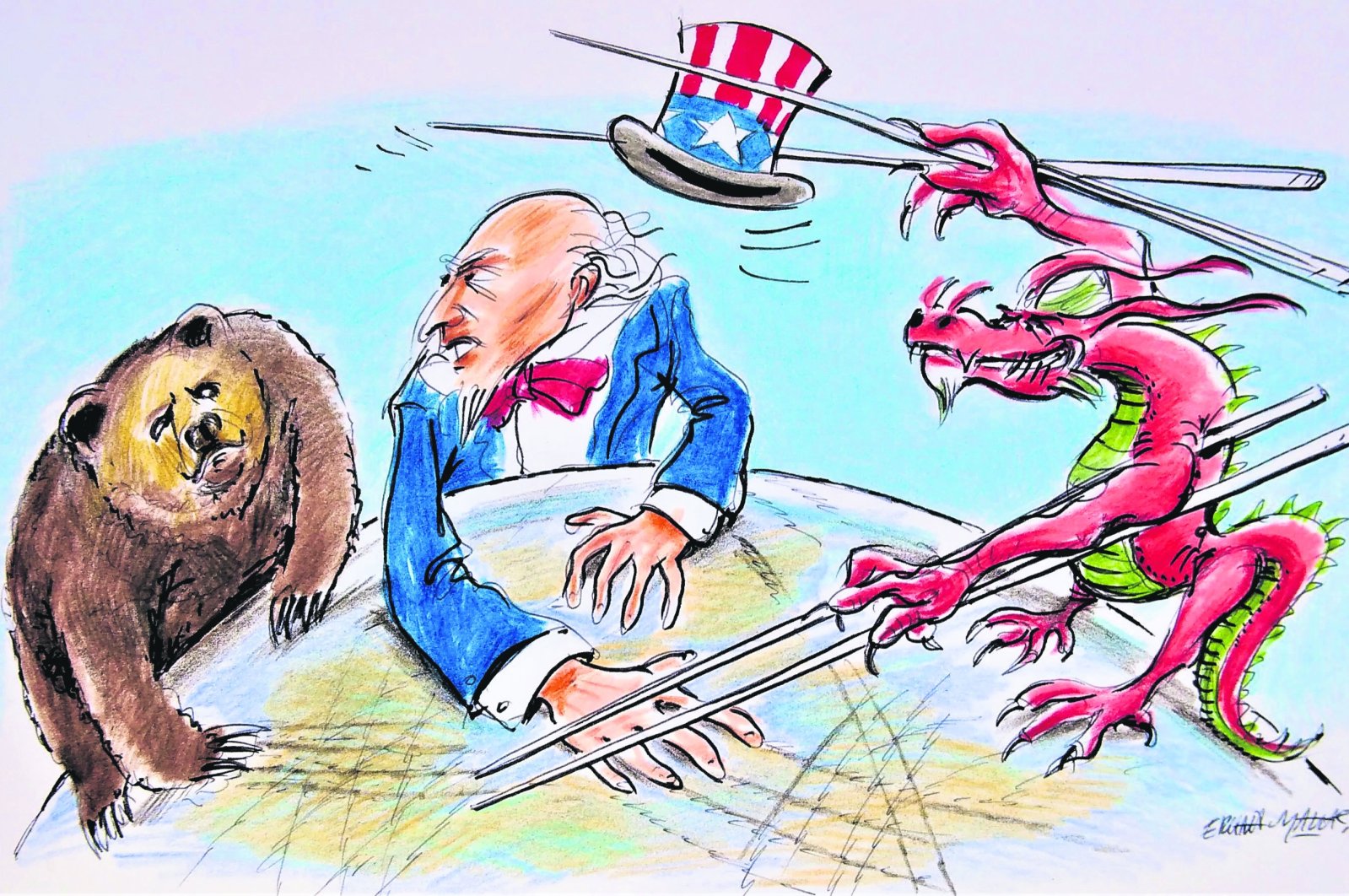 Defend Russian or Chinese interests all you want and nobody will bat an eye; however, utter a single word deemed in favor of Western interests, you’re instantly a traitor with a tarnished reputation. Welcome to Turkey

Turks are a different breed. We are so culturally and politically unique that when reading the take of fellow journalists abroad, I am usually dumbfounded by the extent of their ignorance with regards to Turkish politics and culture.

The most appalling example is that many of my fellow journalists in the West tend to think that Gülenists, members of the Gülenist Terror Group (FETÖ), are a bunch of hippies from the late 70s out to bring peace to the planet and that PKK militants only use the barrels of their rifles to store roses.

Whenever someone reveals the truth about the PKK’s atrocities (which have made Kurds’ lives in eastern and southeastern Turkey unbearable), they point to inhumane treatment, torture in prisons and the total denial of Kurdish identity back in the 90s. Nobody says those things didn’t happen. Nobody claims that the PKK came to be out of nothing. Of course, the Turkish state’s systematic oppression of Kurds back in the day was one of the main reasons for the existence of the PKK. Nevertheless, the humanistic reforms implemented since and the general positive change in atmosphere take away any legitimacy the PKK might have had back then. The PKK truly has no reason to exist today, and the fact that the terrorist group still does is the bane of Kurds’ existence now. This is one aspect of Turkish politics that foreign journalists tend to have a hard time understanding.

'Our hippies did it'

When it comes to Gülenists for that matter, my fellow reporters, especially in the West, tend to see them as representative of democratic defiance in the face of Turkey’s authoritarian drift.

Well, if there is a group that symbolizes defiance against Turkey’s autocratic tendencies, it's surely not the Gülenists who tried to take over the democratically elected government back on July 15, 2016, the very day I had to hide under a table at the Daily Sabah office when those “peace-loving hippies” were shooting live bullets at us.

Another prominent example of Western misperceptions about Turkish politics was CNBC’s comical interview with “Turkish” NBA player Enes Kanter, who just recently became a U.S. citizen and adopted the name Enes Kanter Freedom. It was hilarious how they were presenting Kanter, the self-proclaimed son of Fetullah Gülen – the leader of the Gülenist cult – as a “defender of the truth,” “defiant of the evil” and other descriptions in the same vein.

Kanter is probably one of the sneakiest, most hypocritical human beings to ever walk the face of the earth. He’s nothing more than an opportunist pretending to be “a democrat fighting against Turkey’s authoritarian regime.”

Those are the two most cliché, repeated examples of how foreigners get it wrong when it comes to Turkish politics. Now, let’s explain how Turks view the world, from experiences, observations and analyses of someone who has lived in Turkey for over 30 years, so that my fellow colleagues abroad can truly understand how global politics is perceived here.

I can say this confidently: the West is seen as the root of all evil here, but with a catch. Nearly everybody agrees that the broad Westernization efforts first implemented by our republic’s founding father Mustafa Kemal Atatürk were for the good. However, it’s perceived as a sin to defend Western values. As I say, Turks are a different breed, and a very conflicted one. We even have a catchphrase that I’ll do my best to translate: “batılı anlamda” or “done/executed like in Western societies.” There is no official translation for this in any dictionary I looked at so I tried my best here. The phrase “batılı anlamda” is meant to explain the modern characteristics of something, or anything for that matter. For example, “batılı anlamda the first factory” means that Turkey built a factory in accordance with modern standards for the first time. That’s a catchphrase that Turkish school books use.

It’s as if being a Westerner is both good and bad; we’re apologetic Westerners and proud Easterners at the same time. As I said, Turks, especially culturally, are so conflicted that I have a hard time understanding my own nation from time to time.

Turkey’s geography, which sits right at the crossroads of Western and Eastern cultures, does not help either. Turkey's NATO membership is the only thing that makes us officially a part of the West.

Regardless if you’re a socialist, a center-left democrat, a center-right democrat, someone with far-right or far-left tendencies, an extremist, an anarchist, or an adherent to any other political ideology: you are bound to hate the United States if you’re living in Turkey. That’s an absolute must here, and I’m not even exaggerating. Hell, even saying that “we should stay in NATO” is usually frowned upon. Anti-Americanism is so deeply rooted in Turkish society that you cannot even think of anyone praising American policies. I know that the United States is not worthy of praise for a Turk, of course. Considering its support to FETÖ and the PKK, the atrocities committed by American soldiers in Iraq, Afghanistan and many other Muslim-majority countries make the U.S. unlovable for a Turk and I’m on the same page here. Nevertheless, the most hilarious thing is, nobody cares if you defend Russian or Chinese interests and absolutely no one will call you a “traitor” for doing so.

There are many valid reasons for the anti-Western sentiment here. The way the United States has treated Turkey over the years, the fact that the European Union has been making us wait for more than half a century for membership, rising anti-Turkish and Islamophobic sentiments in the West and the wars we fought against Western countries in history are all understandable reasons for a Turk’s dislike of the West. But guess which two countries Turks also fought countless wars against in history? Russia and China.

Maybe it’s because recent history has not seen many conflicts with the East but rather with the West, but our history is full of wars against those two countries too, albeit in the more distant past.

It’s a possibility that, as I said, anything that comes from the West (apart from their development-focused mindset and democracy) is perceived to be bad here due to the fact that three of the four countries we fought against in the War of Independence were Western nations.

It doesn’t matter that we also fought against the Russians a century ago. If you are a Eurasianist (someone who champions closer relations with Russia, China, North Korea and other “Eastern” countries for that matter), you are in the most politically comfortable position that you can think of here.

Nobody will call you a “traitor” for defending Russian or Chinese interests on Turkish soil, and you can comfortably call yourself a “patriot” and everybody will agree. You can publish a full-page defense of China’s genocide against Uyghur Turks on your front page (ironically, in a Turkish-majority country) and spread Chinese propaganda, like the well-known Eurasianist newspaper “Aydınlık” (Turkish for “enlightenment”) does, and nobody will open a class-action lawsuit and call for a trial on the grounds of high treason.

You can join TV shows, as a “Turk” speaking Turkish to defend Russian or Chinese interests and spread the Kremlin or Chinese Communist Party (CCP) propaganda, call Uyghur Turks “terrorists” and deny that there’s an ongoing genocide in East Turkestan right now. Nevertheless, you can also continue calling yourself a “Turkish nationalist” and a “patriot” all the while defending a Chinese genocide against a Turkic people. Because you’re not defending the imperialist West or the capitalist U.S.; because you’re only defending Chinese imperialism that does not count as imperialism. You’re a full-on patriot just because you’re on the other side of the political spectrum.

Because when the United States invades Iraq and kills thousands of people, it’s bad; or when it tortures innocent people in Guantanamo, it’s a crime against humanity. But when China forces Uyghur Turks into concentration camps that it sugarcoats as “re-education centers,” forcibly sterilizes Uyghur women so that the Turkic population is kept under control, bans their religious activities on the grounds of “extremism” and tries to erase their Turkic identity and culture by forcibly assimilating them to be Han Chinese, it’s all good. Likewise in the case of Russia: a Turk can be considered a patriot while turning a blind eye towards Moscow's treatment of Crimean Tatars.

Because those crimes against humanity are not perpetrated by evil Western forces.

I know that doesn’t make sense, but nothing really does here.

Maybe this conflicting identity of ours is what makes us truly unique in the history of humankind.