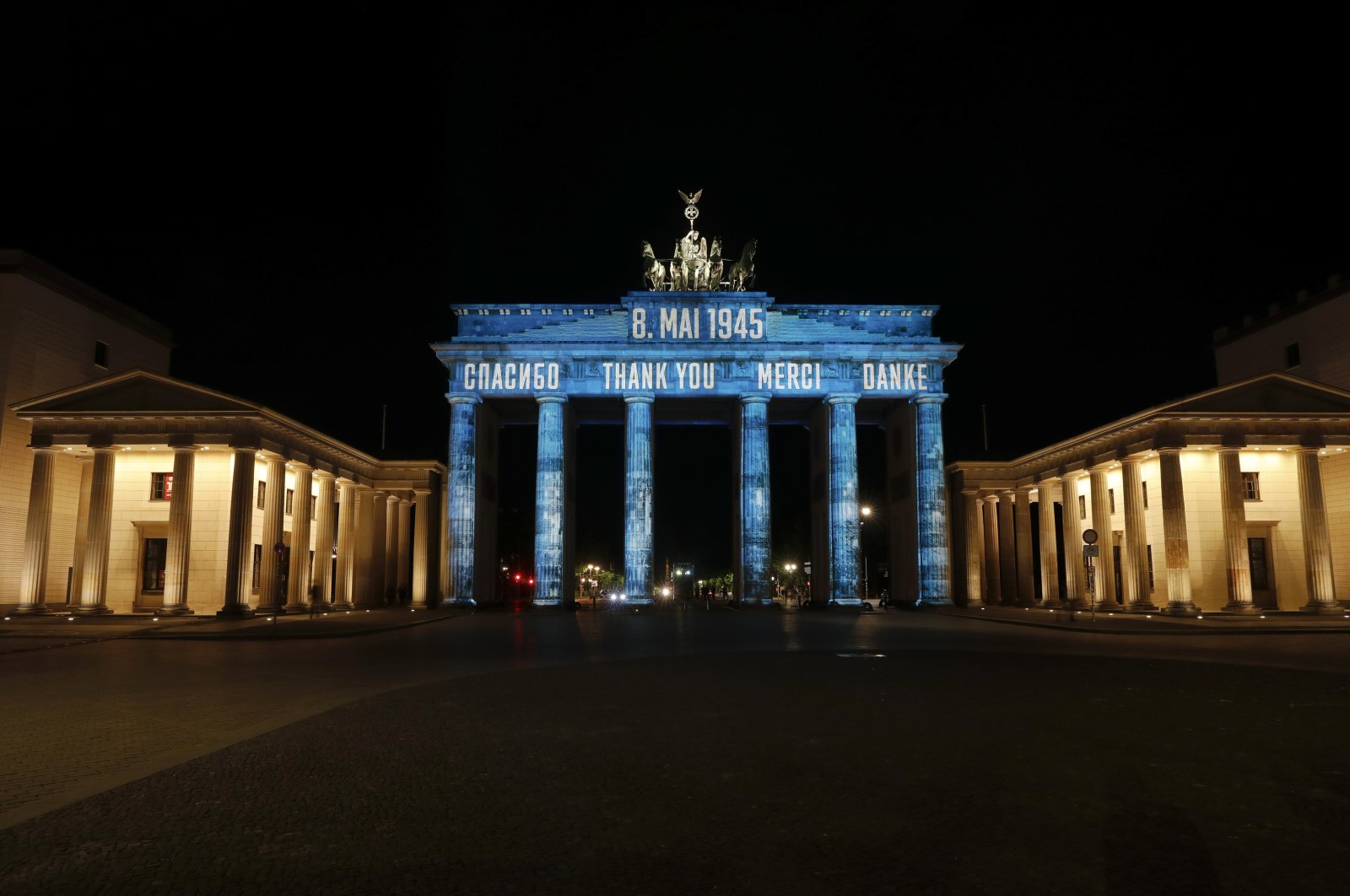 The German landmark Brandenburg Gate is illuminated to mark the 75th anniversary of Victory Day and the end of World War II in Europe, Berlin, Germany, May 8, 2020. (AP Photo)
by Jurgens Klaus May 15, 2020 12:05 am

The 75th anniversary of V-E Day was marked amid the global pandemic crisis and reminded us all again that we need to make sure there will never be a V-E Day 2.0

Last week witnessed the 75th anniversary of Victory in Europe Day, more commonly referred to as V-E Day. Due to the still ongoing coronavirus situation, the usual public remembrance services had to be canceled, yet leaders addressed their nations by means of television and social media.

An extremely noteworthy news program that aired mid-evening on May 8 in Germany called Heute Journal on ZDF interviewed Klaus von Dohnanyi – who is by now almost 92 years old – where he shared his end-of-war impressions being 16 at the time Nazi Germany unconditionally surrendered to the Allies.

Both his father and uncle had been murdered by the Nazis shortly before the war in Europe, but not yet in Japan, came to its end. Von Dohnanyi would later on in his life become a leading politician of the Social Democrat Party (SPD) and most notably, the first mayor of the city-state Hamburg from 1981 until 1988.

Earlier on the same day, he had already said on a different news channel that whereas other nations are welcome to celebrate victory, his own country Germany would be better served by remembering. Yet his razor-sharp analysis of events challenging the world today paired with a stern warning about how Adolf Hitler and the Nazis managed to come to power is what this article is all about.

Von Dohnanyi stated that whilst it is most naturally appropriate to refer to May 8, 1945, as the day of liberation for Europe, one should never overlook that the actual reason for Hitler taking over was the total collapse of the German democratic order and the end of the Weimar Republic. The real historic lesson the world today and Europe, in particular, have to constantly keep in mind is what actually led to the demise of the German parliamentary system. According to him, it was above all else the fault of all democratically inclined people and politicians who gave in to dictatorial tendencies without even understanding at that very moment their own country had just closed the door to its democratic past for good, a horrible scenario lasting for 12 long years that did not only destroy their homeland but brought unimaginable suffering to the whole world.

Infighting and not cooperating in times of crisis was one major reason for the downfall, but one also has to look at the dire state of the economy; a complete economic depression and total economic free fall facilitated the rise to power of these anti-democracy sentiments.

Unfortunately even normal, more moderate thinkers and citizens having become frustrated about how their country turned out started looking elsewhere and so sadly found "a strongman" – a person with seemingly easy answers to complicated problems.

Never known for mincing his words, von Dohnanyi made a remarkably frank point on the special day of May 8. When asked about today’s global challenges such as digitalization, globalization, rising nationalism and of course COVID-19, he confirmed that these issues are certainly no peanuts when compared to Nazi horror.

But he explained that nationalism in its modern form occurs when average men and women feel under pressure; economic worries or health concerns or any other series of serious topics are in all likelihood the key reasons for questioning more libertarian views and searching for an environment which is well known to oneself – von Dohnanyi said looking for "das Vertraute" becomes omnipresent, a yearning for "the familiar." In other words: when something big goes wrong in society, chances are ordinary voters prefer populist solutions even to complex matters.

Evaluating his viewpoints, we could say that this yearning for the familiar is nothing negative per se, yet when cleverly misused by populist politicians and their media outlets, it could very quickly turn into something much more sinister and mutate the same way the virus does. Result: preferring splendid isolation over global cooperation, preferring ones’ own neighborhood and ones’ own nation –in a worst-case scenario ones’ own race – over multiculturalism.

Fast forward to the COVID-19 pandemic: Although he did not explicitly say it, commentators must be allowed to interpret his thoughts as a "what if" type of political impact analysis.

What if a society is faced with a pandemic, regardless of it being perceived as a global crisis, and all of a sudden has to fight for itself, including trying to source personal protective equipment? What if ensuing lockdowns catapult a previously healthy economy into an economic free fall of unseen proportions? What if unemployment climbs to over 25% and appears to stay put as a permanent factor? What if one solution seems to be to close all borders so that the virus can no longer enter ones' territory?

Already a list of frightening developments no matter whether – in parts – justified or not, there remains a final question of "what if."

What if another strongman comes along who confuses crisis management policy-making with autocracy and convinces his electorate that the only way out is to embark on a path away from democracy, as after all, was it not democracy that allowed such a pandemic to materialize – or free movement, or globalization, or tourism, or multiculturalism, or free trade or the list goes on?

Although V-E Day 75 was a muted affair no one should assume Europe’s, and the world’s leaders, were not aware of what had happened from 1933 until 1945. As a matter of fact, having listened to von Dohnanyi, he demonstrated that European nations and even more aware, Germany having learned their lesson quite well. But this, in turn, should not allow us to lean back during stressful times of a pandemic, expecting that things will get better as if by magic.

On the one hand, German society post-1945 is a perfect case study, for there is no magic; it took determination, a free spirit, an entrepreneurial approach and certainly a fair dose of luck. On top of it all, it needed democracy and the understanding that it is not just the best, but the only viable model for societies to prosper.

If on the other hand societies expect "magic" to present solutions the electorate might once again prefer easy solutions as far-fetched as they may sound.

V-E Day 75 is now a part of our shared European and global history; it is everyone’s task to make sure there will never ever be a V-E Day 2.0.