Western hypocrisy in Belarus and rising Euroscepticism in Eastern Europe 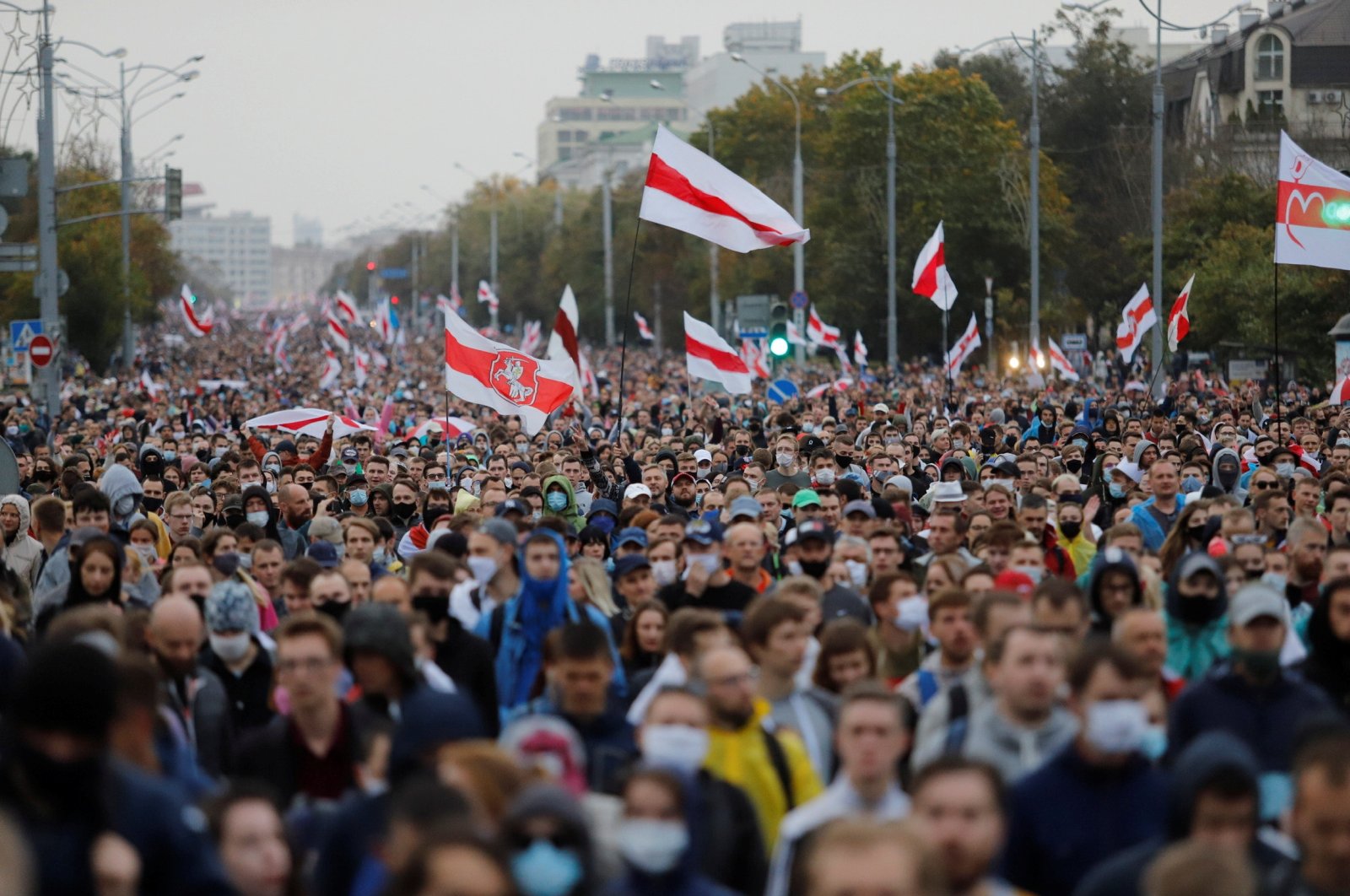 People attend an opposition rally to reject the presidential election results and to protest against the inauguration of Belarusian President Alexander Lukashenko in Minsk, Belarus, Sept. 27, 2020. (Reuters Photo)
by Serkan Aydın
Oct 01, 2020 12:05 am

Belarus is often dubbed the last dictatorship in Europe by the Western axis. The instant President Alexander Lukashenko declared his landslide victory in the elections, which many claimed was rigged, violent protests broke out across the country.

When is an election not thought as free and fair by the Western hegemony? The answer: When it yields victory to a government that turns down neoliberal orthodoxy and objects to submitting its foreign policy to Washington or Brussels.

The West is an ardent discipline of liberal candidates in Central and Eastern Europe, where there has been an adamant polarization between younger and older voters.

For instance, Polish President Andrzej Duda utilized a divisive election strategy in which he promoted Poland's Catholic identity and traditional and religious family values against the growing neoliberal outlook of the younger generation. He has been vehemently criticized for lashing out at neoliberal rhetoric, such as that forwarded by the LGBT+ movement, Antifa and those who trump immigration and multiculturalism.

Since his knife-edge election win, the European Union has threatened to sanction Poland for its restrictions on the judiciary, media and civil society.

The Guardian soon after published an article titled: "Poland on 'the velvet road to dictatorship' after Andrzej Duda wins the presidential election," showing the West's dissatisfaction with the victory of a conservative candidate who questions the morals and ethics of the EU's neoliberal agenda.

Euroskepticism, best defined as "a general term for opposition to the process of European integration" has been on the rise of late.

Long-term commitment to values and norms promoted by the EU has become a contentious issue. Accession countries are forced to fulfill certain demands under pressure and are unable to backpedal when they became full members of the union.

On the whole, there is a range of Euroskepticism. Hard Euroskepticism is an idealistic opposition to the EU's principles and an aspiration for national withdrawal from the EU. Soft Euroscepticism, on the other hand, refers to opposition to certain policies based on perceived threats to the national interest.

For instance, British Euroskepticism is a soft one that it is based on economics, tariffs and state power. However, we observe a hard Euroskepticism in Hungary, Lithuania and Poland, where ethnocentrism and illiberalism have recently increased, while European cosmopolitanism and moral relativism have been blacklisted.

According to a new survey by the Eurobarometer, most Hungarians are fiercely dismissive of the LBGT+ movement, the size of which has substantially soared over the last few years. Last year, U.S.-based watchdog, Freedom House, described Hungary as only "partly free," and the EU has threatened to suspend Hungary's membership of the bloc until it decides Hungary is in compliance with EU values. Unsurprisingly, Hungarian President Victor Orban has been proclaimed the first dictator in the EU.

In 2012, when Guido Westerwelle, who was Germany's first openly gay minister, called Lukashenko's government the "last dictatorship in Europe," Lukashenko retaliated by saying that he "would rather be branded a dictator than be gay." Similarly, the Western media accused Russian President Vladimir Putin of using homophobia to gain votes when nearly three-quarters of voters in Russia opted to support an amended constitution that reinforces a ban on same-sex marriage in July 2020.

The EU's moral identity has been in crisis. While Central and Eastern European communities strive to promote a more traditional lifestyle and religiosity, countries like the Netherlands, which has mandated that "Christ" be spelled with a lowercase "c," and Spain, where birth certificates now provide for same-sex parents to be referred to as "Progenitor A" and "Progenitor B," there has been a drift toward a more postmodern, politically correct society.

A Hungary-based survey on "Socialism, Capitalism, Democracy and System Change" found that 50% of respondents in the Central and Eastern European countries looked at the previous communist regimes positively. The breakdown of this statistic in each country showed Slovenia with 68%, Lithuania with 59%, Hungary with 58%, Estonia with 55%, Poland and Slovakia with 51%, Latvia with 50% and the Czech Republic with 32%.

The same polarization is also evident in Belarus. According to Belarus-based Independent Institute of Socio-Economic and Political Studies (IISEPS) polls conducted between 2014 and 2016, when Belarusians were asked to choose between being unified with Russia or joining the EU, 40–50% chose Russia, while 25–35% picked the EU.

The Western axis claims not to be in pursuit of a prospective EU membership for Belarus and there exists no Belarusian interest in NATO. It is repetitiously stated that the staple objective of the West is to persuade Lukashenko to alleviate repression, adhere to human rights and allow for a bit more political space. Western criticism is said to be based on democratic norms and criticism of a stolen election. There can be no burning desire to pull Belarus into the West as both the EU and NATO have more than enough on their plates! However, is this the truth?

The United States and its European allies have long used the smokescreen of democracy and human rights to undermine regimes that they do not approve of while turning a blind eye to undemocratic practices and rights abuses in countries that do their bidding. Let's remember how pro-Western dictatorships such as Mohammad Reza Pahlavi's Iran, Gen. Augusto Pinochet's Chile and Suharto's Indonesia have been generously bankrolled.

The sheer replica of the Soviets

I lived in Belarus for a year and it was stunning to see how the country is a sheer replica of the Soviet Union in many ways. It is a highly religious and traditional society deeply embedded in conservatism. In 2018, Belarus slammed the U.K. embassy in Minsk for flying a rainbow flag on the International Day Against Homophobia, calling LGBT+ relationships "fake." In a wordy statement, the Interior Ministry said the U.K. was challenging the country's "traditional values."

Belarusian rapprochement with the West began in 2015 and it was driven by pure pragmatism. The West should note that Belarus is not Ukraine. The Belarusian economy is dependent on Russia and above all, there is this historical kinship between the Russian and Belarusian people based on Eastern Orthodoxy in religious terms and Soviet brotherhood on a political basis.

The Western media has cast much light on the ongoing protests and violent crackdown, yet there have been massive pro-Lukashenko rallies in every city as well.

The EU and the U.S. expect that the Lukashenko regime will lose its legitimacy so they can add another vassal state to their list. Rather than call for a recount with international observers, the EU instead called for the creation of an alternative government. The EU has designated that almost 60 million euros ($70.26 million) to be used to fund alternative (anti-government) media channels and non-governmental groups in the country. Is another coup d'etat underway through Western interventionism?

The solution for Belarus is not siding with the EU. The bloc is politically and economically capitalist in nature, and capitalism is parasitic. The state industry of Belarus and its mineral wealth would be enslaved to the post-Lukashenko, pro-EU world.

Ukraine's so-called de-Sovietization and EU integration is an ignominious fiasco as it only deteriorated into corruption and dented the economy overall.

Russian military intervention would also culminate in havoc therefore nor is this an optimal solution.

Instead, Lukashenko should ease up his authoritarianism and restore democracy, human rights and economy with the people of Belarus peacefully and independently.