What will the new German govt's perception of Turkey be? 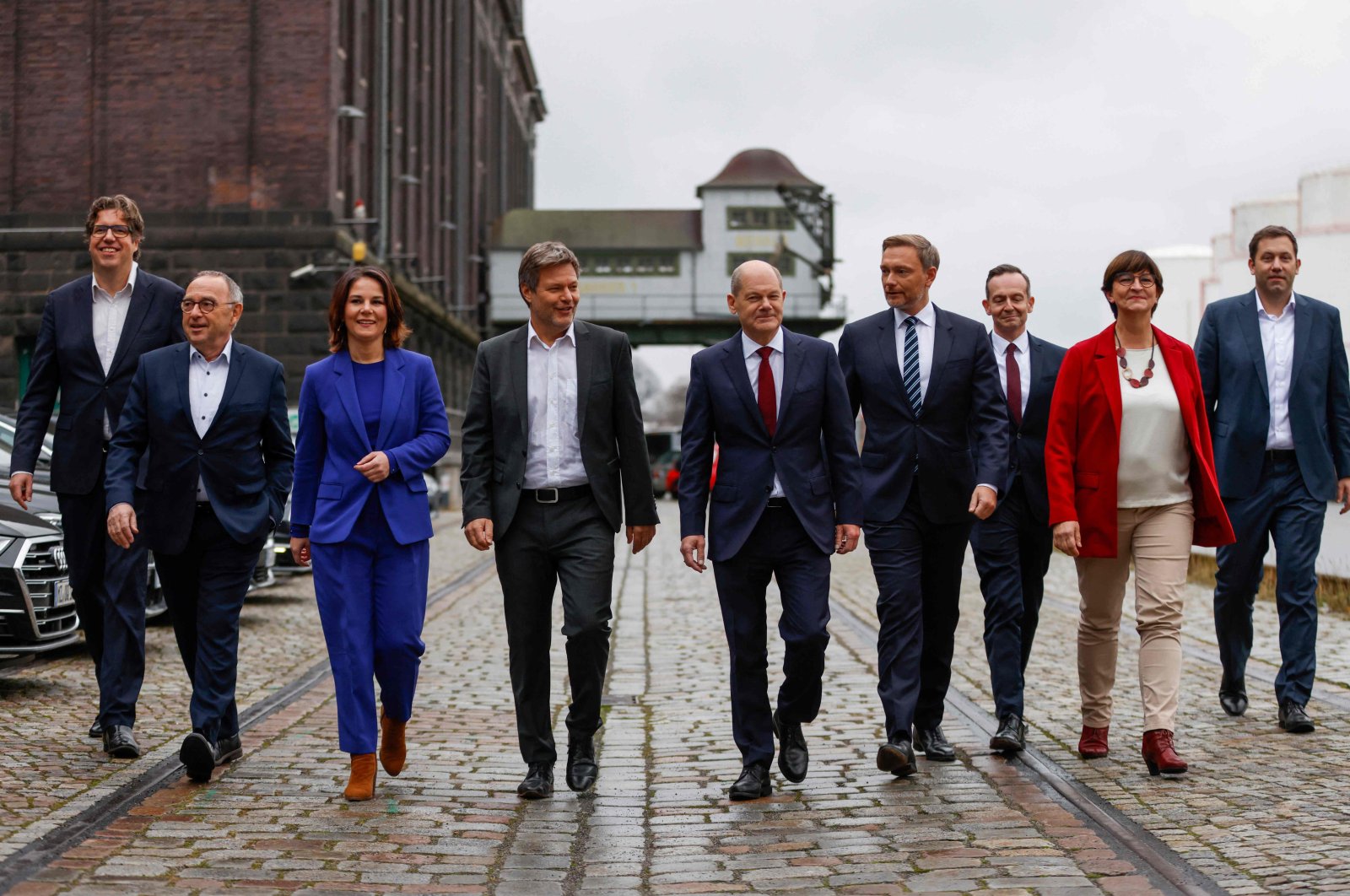 The chairpersons and heavyweights of the German coalition parties arrive for a group photo after a final session of coalition talks, at Westhafen center in Berlin, Germany, Nov. 24, 2021. (AFP Photo)
by Yunus Mazi Nov 26, 2021 12:05 am

The Social Democratic Party (SPD) will likely strive to build a constructive relationship with Turkey. This in turn will lead to tension within the German coalition government

In the Angela Merkel era, a few high points and many low phases were observed in German-Turkish relations. In the period of the new coalition government comprising of the Social Democratic Party (SPD), the Green Party and the Free Democratic Party (FDP), relations will not improve, they may even become worse.

A survey conducted by the European Council on Foreign Relations in June 2021, which was also conducted in Germany, found that Germany views Turkey as a greater rival or opponent than Russia and China. This result may seem surprising, as Russia and China are undisputed influential global players in contrast to Turkey, which is more of a regional actor. However, this survey demonstrates how important Turkey is in public opinion and politics in Germany and Europe.

Attitudes of the coalition parties

Merkel's Christian Democratic Union of Germany (CDU) was largely distanced in its attitude toward Turkey. In comparison to the SPD-Green government from 1998-2005, the Gerhard Schröder-Joschka Fischer government was very friendly toward Turkey and one of the main initiators of the country's European Union accession process in 2005. At that time, Merkel, in opposition with the CDU, had clearly positioned herself against Turkey's EU accession.

Several years later, one could observe a clear change in the SPD and the Greens toward Turkey. In 2017, the SPD candidate for chancellor at the time, Martin Schulz, had stated that if he were elected chancellor, the EU accession process with Turkey would be abandoned. The Greens have made their position clear before. In 2013, the Green politician and current Bundestag Vice-President Claudia Roth had taken part in the Gezi protests and demonstrated against the government. The FDP was and still is sticking to the CDU line with regard to its Turkey policy with its distanced attitude. Therefore, from Turkey's point of view, one should be prepared for a diplomatic partner with whom it will be rather difficult to find a consensus in negotiations.

The coalition members' party programs mention Turkey in several thematic areas, including migration, security policy and NATO. In their party programs, the SPD and the FDP promote the need to create safe routes for refugees to Europe in view of migration problems, defending the Geneva Refugee Conventions and preventing pushbacks as these violate human rights. The latter is very paradoxical, since on the part of the EU, first and foremost the European Commission President Ursula von der Leyen defended the harsh actions of Greek soldiers against refugees in March 2020, thus legitimizing their actions. Furthermore, it is also very striking that the SPD and the FDP do not mention Turkey in the context of migration problems, although Turkey is the most important partner of the EU and Germany with regard to migration cooperation.

The Greens, on the other hand, mention Turkey quite explicitly in this context. Their party program states that the EU-Turkey deal must end, as this deal would undermine international asylum law. Nevertheless, the Greens supported financial and logistical support for third countries like Turkey. The Greens are known for standing up for the rights of refugees. But they are also known for taking a tough stance on Turkey. By ending the EU-Turkey deal, the Greens aim to further limit Turkey's ability to act and reduce the EU's and Germany's dependence on Turkey.

In their party program, the FDP makes it clear that Turkey is a very important, "indispensable" partner in NATO and pleads for "security policy tensions" to be reduced. They also add that there would still be "a Turkey after President Recep Tayyip Erdoğan." The SPD does not explicitly mention Turkey in its party program, but they give concrete examples of military operations in Libya and Azerbaijan, strongly criticizing them and saying that NATO as a community should punish such operations in the future. The Greens also criticize Turkey's military operations without naming them explicitly and add that German arms exports to war zones and "dictatorships" should be stopped. Furthermore, the Greens say that they want to "raise the issue of Turkey's military offensive in northern Syria, which is against international law, in NATO."

In security policy, one can see a consistent line among the three coalition parties toward Turkey. However, the SPD should be highlighted in this context. The SPD and future Chancellor Olaf Scholz, despite their distanced attitude, will most likely lead a security policy toward Turkey that is based on rational foundations. Although the Greens may provide the foreign minister, the party policy of the SPD will most likely predominate. The reason is simply that, usually, in the Federal Republic of Germany, the chancellor makes the foreign policy decisions and the foreign ministry is more of a symbol without real decisive influence. That is why the Greens' calls should not be taken too seriously.

Compared to the Merkel period, the future coalition government will pursue a much more ambiguous policy toward Turkey. While in the Merkel era Germany was interested in finding solutions to problems with Turkey, this cannot be expected from the future coalition government. The liberal FDP and social-liberal Greens will have different approaches towards the Turkey policy than the SPD. However, it can be expected that the SPD will prevail in most cases. This can be seen as a problem for Turkey. However, it will be a bigger problem for the coalition government, as disagreements will create tensions and these tensions will also negatively affect other areas of the government.