Will Afghanistan have a spillover effect on Kashmir? 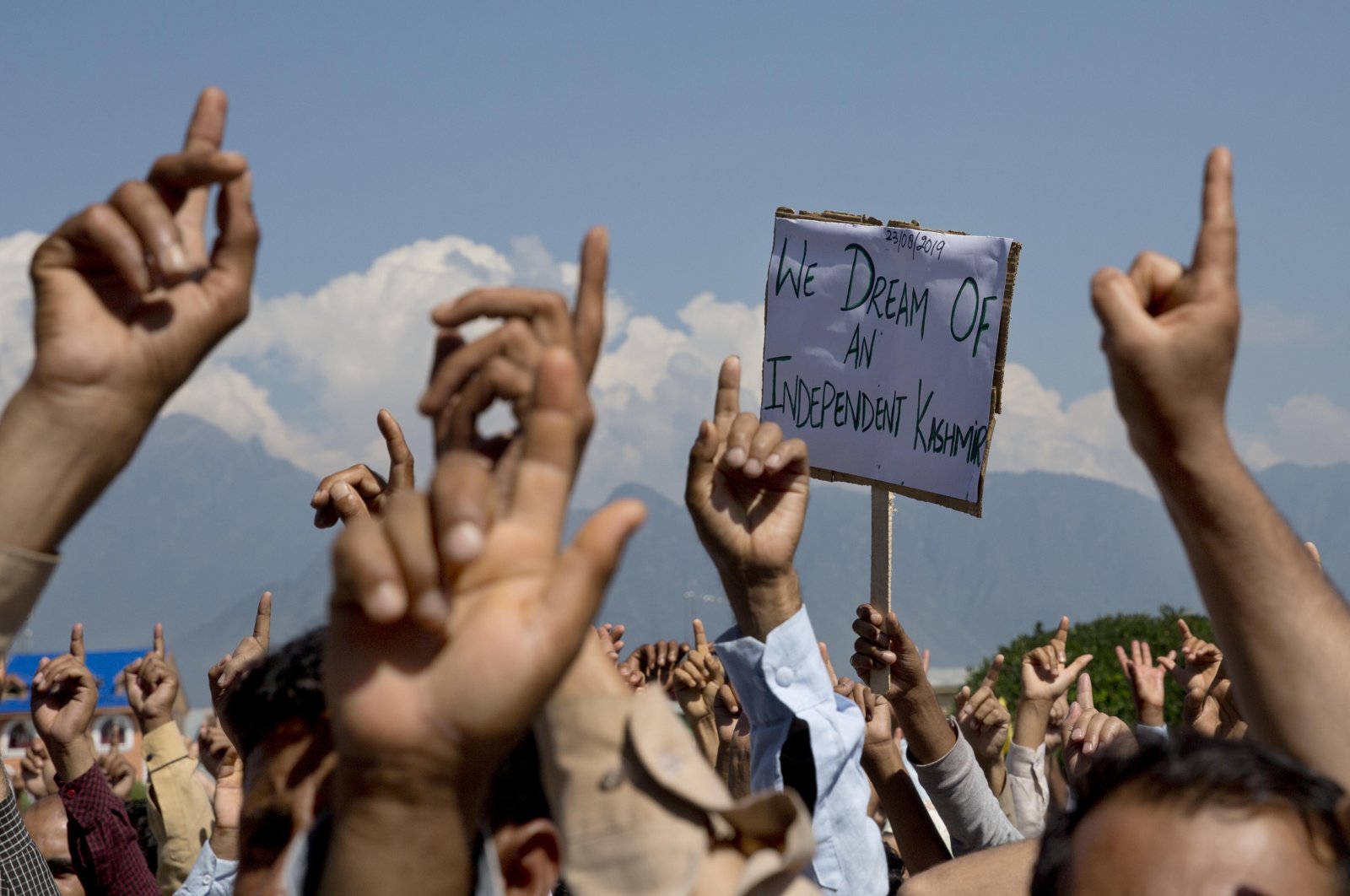 Kashmiris shout freedom slogans during a protest against New Delhi's tightened grip on the disputed region, after Friday prayers on the outskirts of Srinagar, Indian controlled Kashmir, Aug. 23, 2019. (AP Photo)
by Nasir Qadri
Sep 03, 2021 12:05 am

Just two days before Governor Jagmohan Malhotra, backed by the Indian Rashtriya Swayamsevak Sangh (RSS) movement, was reappointed in Indian-occupied Jammu and Kashmir, a massive protest broke out in Srinagar, the summer capital of Kashmir to control the pro-freedom demonstrations. It has been over three decades since Jan. 21, 1990, when Indian occupying troops under his command carried out a massacre in Gawkadal Srinagar, killing at least 52 people and injuring 250, according to a report by Human Rights Watch.

Saeed, who requested he be identified by his first name only due to privacy reasons, had gone to see his ailing maternal uncle in the same area where this human carnage took place. He witnessed about 30-35 dead bodies lying on the road, which were later piled in an army truck by Indian occupying forces. A few days later, Saeed went back to his home in Nawaz Bazar, a politically charged area of the old capital city, with a traumagenic dynamic that “alters children's cognitive and emotional orientation to the world.”

There he met with a friend at science college who was affiliated with a student organization actively involved in the liberation struggle against India. While discussing the massacre and possible counter strategies to Indian occupation in Kashmir, Saeed was invited to attend evening classes at a local madrassa.

Nasir-ul-Islam, senior executive of Hizb-ul-Mujahideen, the largest Indigenous liberation group, would teach dozens of students in his madrassa, which Saeed attended on the invitation of his friend. “Afghan Mujahideen bleed the Soviet Union in Afghanistan, Allah has sent down his angel to help the Afghan Mujahideen. The foreign invasion is over; soon it will be in Indian-occupied Kashmir, our struggle must be akin,” were the types of topics were deliberated at the gathering. Saeed returned home with some Islamic literature and the famous novel "Paharon ka beta" ("Son of Mountains") recounting the unprecedented sacrifices and heroism-based adventures of a teenage Afghan rebel.

A year later, Saeed joined the Hizbul-ul-Mujahideen ranks and remained active for two years. He was severely injured and arrested in an army ambush in north Kashmir and was detained for multiple criminal offenses under the Terrorist and Disruptive Activities Prevention Act (TADA) – a controversial law that was later repealed by the government of India. He was released six years later, having served his sentence. Now in his late 50s, Saeed is working as librarian at a private school in the summer capital of Kashmir.

War of liberation in Kashmir

The ongoing war of liberation in Kashmir is one of the longest continuing armed rebellions in the contemporary world, having begun in 1989. It has often been claimed that the rigging of ballots by the Congress and National Conference parties drove Kashmiris away from electoral politics and disillusioned them into doing something that resulted in bloodshed.

Jamaat-e-Islami, Abdul Gani Lone’s People’s Conference and All India Majlis-e-Ittehad-ul-Muslimeen (AIMIM) joined hands under the standard of the Muslim United Front (MUF) and collectively agreed to partake in the assembly elections. However, their candidates, including Syed Salahudeen, the present head of the Indigenous rebel group Hizbul Mujahideen, were pronounced to have lost even though the result was diametrically opposite.

The former Union Minister of Jammu and Kashmir State Farooq Abdullah said in an interview that he "foresaw the turbulence coming and accepted that the main motivation behind the armed rebellion was the aftermath of Russian defeat in Afghanistan. The Kashmiris felt in the event that if a power like Russia can be ousted, why not India?” In the early 1990s, hundreds of battle-hardened Afghan rebels slipped into Jammu and Kashmir and fought alongside local Kashmiri rebels, raising the level of the insurgency against Indian troops.

An intelligence report stated that about 200 Afghan rebels were present in the U.N.-recognized disputed territory. Interrogations of a captured Afghan and of Kashmiri rebels indicated that the Afghans were mostly members of Hezbi Islami, the party of engineer Gulbuddin Hekmatyar, former warlord and prime minister of Afghanistan.

With the overnight "effective control" of the Taliban in Kabul ousting the Ashraf Ghani-led Afghanistan government, Taliban spokesperson Zabihullah Mujahid, who would generally cover his face as a Taliban fighter, said in his maiden media briefing: “Those Afghans who allied with the United States or the erstwhile Afghan government and fought against Taliban will not be persecuted." Mujahid reiterated that the Taliban seek to establish peace with all their neighbors, adding that "Afghanistan is no longer a battlefield" and the new regime would not pose any kind of threat to other countries.

However, Indian Prime Minister Narender Modi doubted the Taliban’s ability to form a peaceful government. He tweeted from his official account: “The destroying powers, the thinking that builds an empire on the basis of terror, may dominate for some time ... but, its existence is never permanent, it cannot suppress humanity for a long time.”

Since 2001, India has spent a cool $3 billion or so to strengthen the American-installed regime. It has built roads, dams, power lines, clinics and schools across the country. It has trained Afghan officers, including women, in its military academies. Besides losing all its investment in a secular, democratic Afghanistan, India has also lost strategic leverage.

Now the security establishment of Modi’s Hindu-nationalist government, having stirred its own troubles in Kashmir by abrogating the disputed region’s semi-autonomous status in 2019, perceives that it must face the prospect of a new generation of Muslim Kashmiris inspired by the Taliban’s fanaticism.

In a passing-out parade at the Indian military’s Jammu and Kashmir Light Infantry (JAKLI) regimental center in the summer capital of Kashmir on June 25, Lieutenant Gen. G. Pandey of the Srinagar-based 15 Corps, said: “There’s a possibility that Afghanistan may push some militants into Kashmir after U.S. forces leave Afghanistan.” Another retired Lieutenant Gen. Ata Hasnain, who believes in winning the "battle of narrative" in war-torn Kashmir, said in an interview that “any situation in Afghanistan always has an effect in Jammu and Kashmir."

However, there could be efforts to try and exploit the situation while attention is focused elsewhere.

Modi's offensive doctrine, even two years after the abrogation of Article 370, does not make much difference. Even though the iron fist has orchestrated the manipulation of political discourse, militancy is still a challenge in Kashmir.

According to official figures, 163 local youths joined militant ranks in 2020, while the first seven months of this year have seen over 80 such cases. From January to July 31, 2021, 95 armed fighters died fighting occupying Indian forces. Twenty-three Indian occupational forces were also killed during these encounters.

However, the people of Kashmir have been fighting the same war of liberation for the right to self determination against the Indian military occupation for almost seven decades. It is possible that the defeat of U.S. as an occupier in Afghanistan will inspire not only the indigenous armed fighters in disputed Jammu and Kashmir but those vulnerable groups in India who are facing persecution as minorities.

Lawyer with expertise in armed conflict and international advocacy who leads the Islamabad-based Legal Forum for Kashmir
Last Update: Sep 03, 2021 10:50 am