Will the women of the Arab Spring change Tunisia? 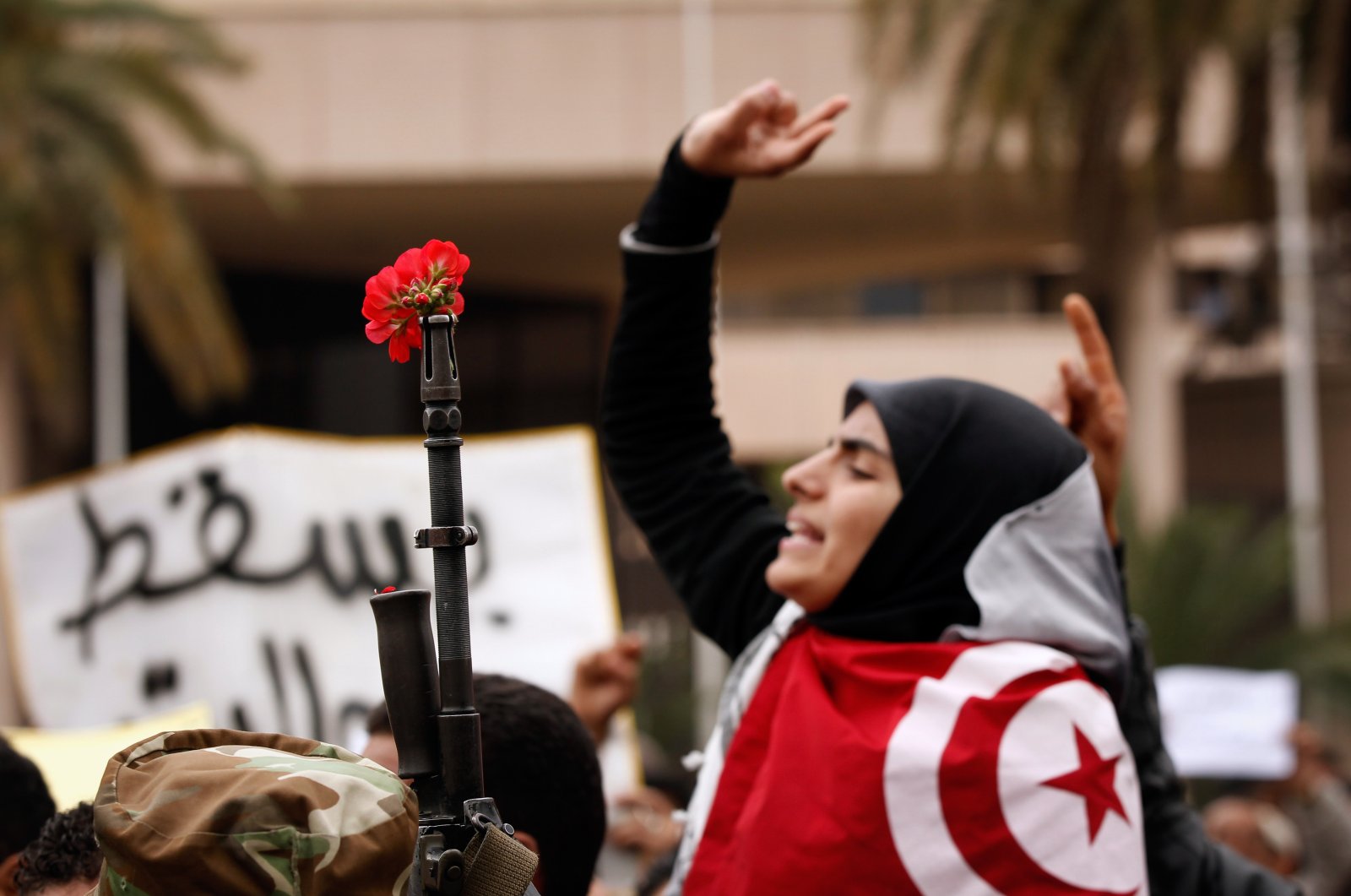 A Tunisian demonstrator makes a peace sign next to a flower in the barrel of a gun during a mass protest for changes in Tunisia's new government, in Tunis, Tunisia, Jan. 20, 2011. (Photo by Getty Images)
by Hande Ortay - Hamoon Khelghat-Doost Jun 15, 2021 12:05 am

The events have played a critical role in gender movements across the Middle East and North Africa as people were fighting for justice and rights. Particularly in Tunisia, female protesters brought surprising developments to the region

A delay in the delimitation of the Azerbaijan–Armenia border

The Arab Spring took most people in the region by surprise in more ways than one. It originally sparked in Tunisia after the self-immolation by grocer-peddler Mohamed Bouazizi on Dec. 17, 2010, who was protesting the country’s inhumane socioeconomic conditions.

The popular uprising that started in Tunisia following his act soon spread to other Arab countries in the Middle East and North Africa, marking the most dramatic political changes in the region since the mid-20th century.

Was Bouazizi's self-immolation a political protest or a personal feeling of humiliation and profanity? No matter the reason, it ignited a fire that spread to other Arab countries – including Egypt, Libya, Syria and Yemen – and became known as the Arab Spring.

Economic hardships, poverty and corruption under autocratic and oppressive governments and high unemployment brought millions of desperate people onto the streets. In several countries, the protesters were successful in toppling the dictators.

Another aspect that surprised most observers around the world was the noticeable presence of women in the upheavals, whether as activists, bloggers, or simply turning up on the streets. What united these women was their demand for justice and recognition of their civil rights.

Female activism during the Arab Spring in many ways stands in sharp contrast to the persistent perception in the world that Muslim women are victims, are oppressed and have little agency.

More than a decade after the start of the Arab spring, in some countries including Tunisia, women have been relatively successful in achieving what they were protesting for, while in other cases, their objectives were not achieved significantly, or at all.

Traditionally in some societies in the Middle East and North African region, women were granted a degree of social and civic rights. These were granted after long and difficult struggles against ruling regimes.

At the same time, many authoritarian regimes in the region were using women's rights (such as the right to vote) as a tool to prove their legitimacy in the eyes of the world community.

Realizing the importance of receiving the support of women, who make up half of the population, these authoritarian regimes were also viewing women and their rights as potential propaganda tools to advocate their “good governance” globally.

On the eve of the Arab Spring, gender indicators related to the social status of women in Arab countries were signaling a better position for Tunisian women in terms of literacy, higher education, community involvement and workforce representation compared to women in other Arab states.

At the beginning of the Arab Spring, women's rights movements were at various stages of development. For instance, they did not exist at all in Libya and Syria, they were weak in Egypt and they were semi-legal in Tunisia and Morocco.

Only Morocco and Tunisia had women’s organizations whose presence was visible at the community level. These organizations had the capacity to enter into a coalition with political elites, as well as other partners in civil society (for instance – trade unions and human rights organizations) to bring about political and legal reform.

It can therefore be concluded that reforms on women's rights in most Arab states were implemented in a top-down fashion, and in all cases, reforms responded more to the political expediency of the sitting regime of co-opting women into national development projects than to a genuine aspiration to improve gender equality.

Despite this situation, women have never been considered equal to men in both political and economic processes. For this reason, the main demand by women throughout the Arab Spring revolt was to achieve a democratic society based on freedom, equality and human rights.

In Tunisia, the protest was at first limited and irregular. Security forces initially only appeared to try to restrain the demonstrations, but as more men and women joined the protests it became clear that the challenge to the sitting regime was serious. During these protests, women were arrested, detained and tortured by the ruling regime, but they did not give up their protests.

As women became more visible in the protests, the state launched a gender-specific deterrent by using sexual harassment and even rape. Therefore, in this struggle for democracy, women paid just as much, sometimes even more severely, than men did. The presence of women among the protesters in Tunisia, therefore, represented an important challenge to the authoritarian regime's legitimacy.

Unlike other countries involved in the Arab Spring, Tunisia was able to make the transition to democracy. The world community praised the country's path to democracy and referred to it as a "beacon of hope" in the Arab world.

The country's strong civil society was able to reconcile conservatives and secularists, and in 2014, an advanced national constitution was drafted that included a law that guarantees equal rights for men and women, freedom of opinion and civil government.

In 2011, Tunisian women served on four high-level commissions set up to run the country during the transition period. The transitional government announced the Equality Act, and many political parties, both old and new, ran in the October 2012 elections for the National Assembly, and women made up 27% of the members.

The Arab Spring rallied women from all walks of life to join their male compatriots in pursuit of dignity and regime change. Today, women who overthrew oppressive dictators still demand equal rights with men in social, political and economic fields. The contribution of women to the Arab Spring to achieve the desired result is undeniable.

The perception of Arab women as passive and incapable of political struggle was completely changed during the Arab Spring due to their active participation in the movement. With this brief look at the history of Tunisia compared to other countries that went through the Arab Spring, it can be said – at least so far – that Tunisia is the only successful example of liberation that resulted from the Arab Spring. Hopes remain high for Tunisia to reach the desired political and economic stability in the not too distant years.

A delay in the delimitation of the Azerbaijan–Armenia border