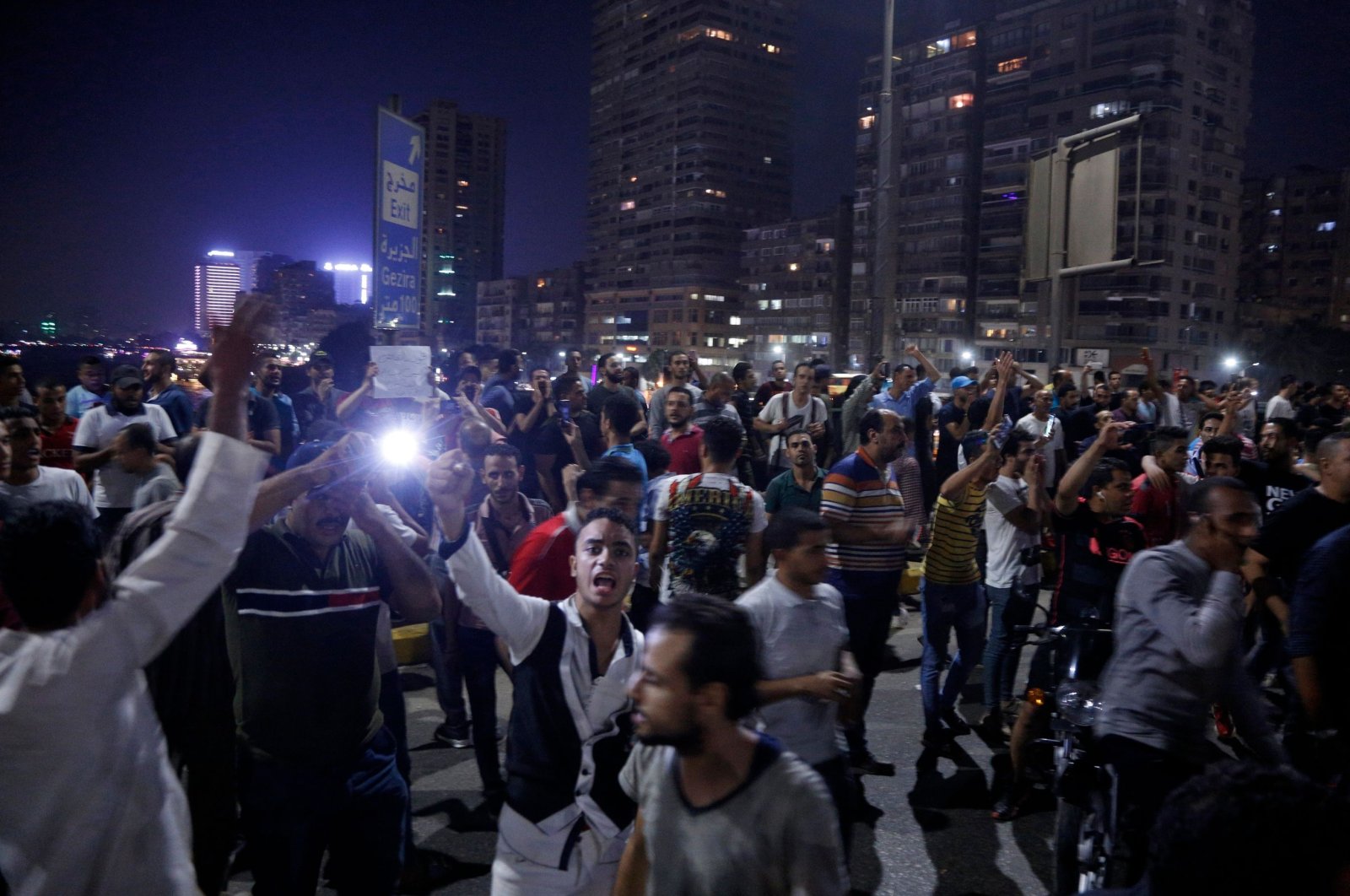 Egyptian protesters shout slogans as they take part in a demonstration calling for the removal of President Abdel-Fattah el-Sissi, Sep. 22, 2019. (AFP Photo)
by Daily Sabah with AFP Jan 21, 2021 10:51 am
RECOMMENDED

Massive protests broke out in Egypt a decade ago following a wave of uprisings in Tunisia and Yemen in what would become the Arab Spring. Egypt was a central country in terms of demonstrations with thousands of Egyptians from different sides of the political and economic spectrum gathering at the now-famous Tahrir Square in Cairo to challenge President Hosni Mubarak's 30 years rule. Ten years later, the struggle continues.

Days after Tunisians toppled dictator Zine El Abidine Ben Ali in 2011, demonstrators in Egypt took to the streets to demand the departure of their president. Two weeks of vast protests centered in Tahrir Square culminated in Mubarak's resignation and the military assuming power. During 18 days of countrywide demonstrations, at least 850 people died in Cairo as it became the hub for Arab Spring protests.

One year after Mubarak stepped down, Muslim Brotherhood leader Mohammed Morsi won 51.7% of the vote in an election, becoming the country's first and only democratically elected president. Morsi's rule proved divisive and after new protests, Abdel-Fattah el-Sissi led the military in an overthrow of the government that resulted in the president's arrest in July 2013. Morsi denounced the coup and his supporters set up protest camps in Cairo. Then on Aug. 14, police attacked them, killing at least 800 people in clashes and drawing widespread condemnation.

The Arab Spring a decade ago gave Egypt's Muslim Brotherhood a brief shot at power, but today many of its followers are dead, in jail or in exile. Hounded by Egypt's el-Sissi, the Muslim Brotherhood sees a new revolution sweeping aside the current regime.

"No injustice can last forever," Talaat Fahmy, the movement's official spokesperson, told Agence France-Presse (AFP) in Istanbul. "People's patience and ability to tolerate what is happening is not eternal. A street uprising is inevitable, although I cannot predict a precise date."

Jailed eight times during the three-decade rule of Mubarak, Fahmy left and settled in Istanbul in 2015 after spending two years in prison under el-Sissi. He considers the Egyptian president's rule even more damaging to his country than that of Mubarak, who died in February 2020. He accuses el-Sissi of overseeing a "bloodthirsty regime that rules with an iron fist."

"The Muslim Brotherhood movement is 93 years old and it has seen similar travails under (former Egyptian president) Gamal Abdel Nasser from 1954 until the release of its leaders from prison in 1974," said Fahmy. "The group did not disappear. It did not cut off contacts with those members over all those years. The Muslim Brotherhood knows how to communicate with its members, adapting to the security and political circumstances."

According to Fahmy, the situation in Egypt today is worse than it was under Mubarak, who tried to maintain a certain balance, while the current regime does not care. He said, "No change in Egypt is possible through elections under the current regime."

Fahmy thinks Western powers that once gave el-Sissi the benefit of the doubt because he presented himself as an ally in the fight against extremism "are beginning to realize that he is leading the country to the brink of an implosion."

"Egypt under el-Sissi's rule has no future. You just have to see how the army is taking over national companies and imprisoning businessmen ... The army now controls between 70% and 80% of the economy and the country's businesses," Fahmy said.

He expressed little fear at the repercussions of this month's reconciliations between Qatar, where some of the group's members have fled to, and its regional rivals in the Gulf and Egypt that have branded the Muslim Brotherhood a "terrorist organization."

The movement "is not dependent on this or that government, and all the financial aid it receives comes from the group's own members," he said.

"We do not receive any support from Qatar or Turkey," said Fahmy, stressing that the only help the group gets from Ankara is the authorization to be present in the country.

Turkish President Recep Tayyip Erdoğan has frequently accused Egyptian authorities of killing Morsi, who died in 2019 after collapsing in court during his trial. Tensions between the two countries have escalated since then, with Egypt rolling out an anti-Ankara campaign, arresting Turkish tourists visiting the country. Under El Sissi’s rule, the country sided with the United Arab Emirates (UAE) in Libya and with Greece in the Eastern Mediterranean crisis – both positions that contradict Turkey’s. Last year the Egyptian authorities bombarded Turkey for its involvement in Libya, prompting a strong reaction on Ankara’s part.

"We never embarrass the country; we are present in and do nothing to violate its law and traditions," Fahmy said.