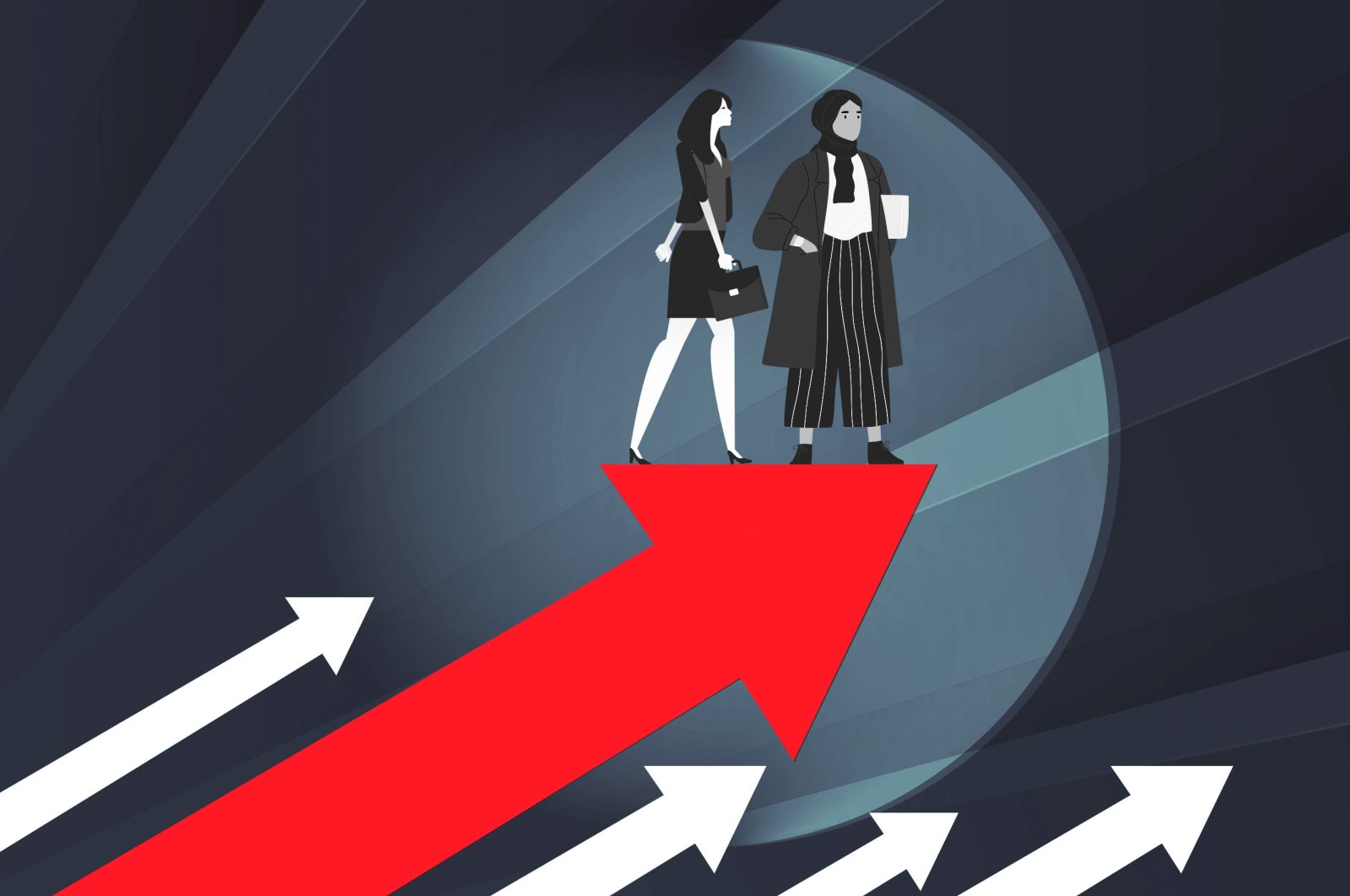 A photo illustration by Daily Sabah's Büşra Öztürk symbolizes the women empowerment in business life.
by Hande Ortay Dec 15, 2021 12:05 am

In Turkey and beyond, increasing the participation of women in business depends on raising education levels

Throughout history, women have participated in economic activity at varying levels. The Industrial Revolution represents a serious turning point in the position of women in working life. Economic, technological and internal changes that occurred after the Industrial Revolution have created opportunities for women to participate more in economic activities, aside from the roles that come with motherhood and being a housewife, and have led to the birth of the concept of the “paid female labor force.”

Earning a salary is vital for the empowerment of the female labor force. It makes them visible in society, provides a sense of individuality and promotes de facto equality in all areas. At the same time, the distinction between women who participate in economic activity and those who don't becomes even more evident with the example of a developing paid female workforce.

Women, who make up almost half of the country’s population, are a valuable resource who play a role in the overall progress of a country. Currently, without the participation of women in business life, it is impossible to discuss the stable economic growth and development of a country. Increasing the participation of women in the workforce, while increasing economic growth, also positively affects the position of women in society, bureaucracy, politics and family, making a serious contribution to the internal and cultural development of the country.

Today, women's status in business life is a direct result of the difficult struggles they have faced for centuries. However, research has shown that all over the world, although the degree of challenges vary, they still face many problems. The biggest issue is gender-based professional discrimination, which covers a wide area. Discrimination is frequently encountered in employment and promotion processes in many sectors and is also reflected in disproportionate remuneration. Occupational discrimination based on gender greatly affects the position of women in business life. Improving opportunities for female professionals requires the updating and development of employment policies that promote gender equality.

The issue of gender-based professional discrimination, which is directly related to the development of the economic, internal and cultural structures of many countries, is a reflection of the problems arising from the absolute economic and socio-cultural structure of the country. Therefore, proposals for solutions to problems related to gender discrimination should not only be included when developing employment policies for women but also in the development of other policies that indirectly affect them.

Employment, education and representation in decision-making bodies are just some of the areas that demonstrate how far behind women are regarding participation in public life. Studies have shown how important education is in life. In the 21st century, it is essential that countries contribute to education in order to develop. But women have been excluded from education for many years and have also been deprived of job opportunities as a result.

By dismantling social prejudices based on gender and remembering that women also have rights they are entitled to, opportunities should be seized to raise awareness in the field of education to promote equal opportunities. When a woman enters the workforce, her self-confidence increases as does her courage to do bigger things, which helps the economy develop in all areas.

Patriarchal societal structures have dominated human history and the distinction between men and women is concretely woven into society's framework. Discriminating between the genders limits women to the home and private life while promoting men as a force that assumes the financial responsibilities of the family and has the first say in decisions to be made.

In other words, women are tasked with reproducing and household chores, while the men are out participating in the world. Because of their gender, women have been prevented from participating in working life, social activities and have been denied their right to education. Women have since made great strides to gain the legal and economic freedom they deserve as a result of their long-running struggles.

Currently, through both the law and the ongoing struggle, the discrimination between men and women is being eliminated and equality of opportunity is being sought. Efforts to harmonize women’s work life with family life are still ongoing.

However, more progress needs to be made in Turkey since there are still major differences between us and developed countries. It is possible to list the problems faced by women in business life in nine main groups: sexual discrimination, inequality in education and vocational education, sexual harassment in the workplace, inequality in employment and promotion, psychological harassment, informal work, inequality in the enjoyment of social rights and job insecurity.

In recent years, various policies have been followed to increase women’s participation in working life. The most basic prerequisite to increase the number of women in employment in the labor market, both worldwide and in Turkey, is to raise the level of education women receive. Increasing the level of education allows women to work in more skilled and high value-added jobs.

In addition, state policies must be supported by all sects of society, especially by public organizations, when it comes to employing more women.

In this context, gender equality must be emphasized in government legislation and regulations to increase women’s employment and to reach the employment numbers that developed countries have. To encourage women to enter the workforce, educational programs should include developing professional areas outside of traditional sectors and new technologies should be taken into account.

Another important issue is the increase of women’s shares in employment in registered and insured sectors. In particular, women who work under the table in small workplaces and are not provided social security.

It is possible for women to gain true equality in the workplace so both sexes can enjoy equal opportunities but to do this, the traditional understanding of gender-based employment must be destroyed.

In addition to protecting the traditional family structure through egalitarian relationships and eliminating provisions related to female-specific professions, significant changes are necessary in the field of education and in government policies. These changes will pave the way for a stronger female presence in the workplace. Likewise, women should be fairly represented in decision-making systems to ensure effective policies are established and maintained.