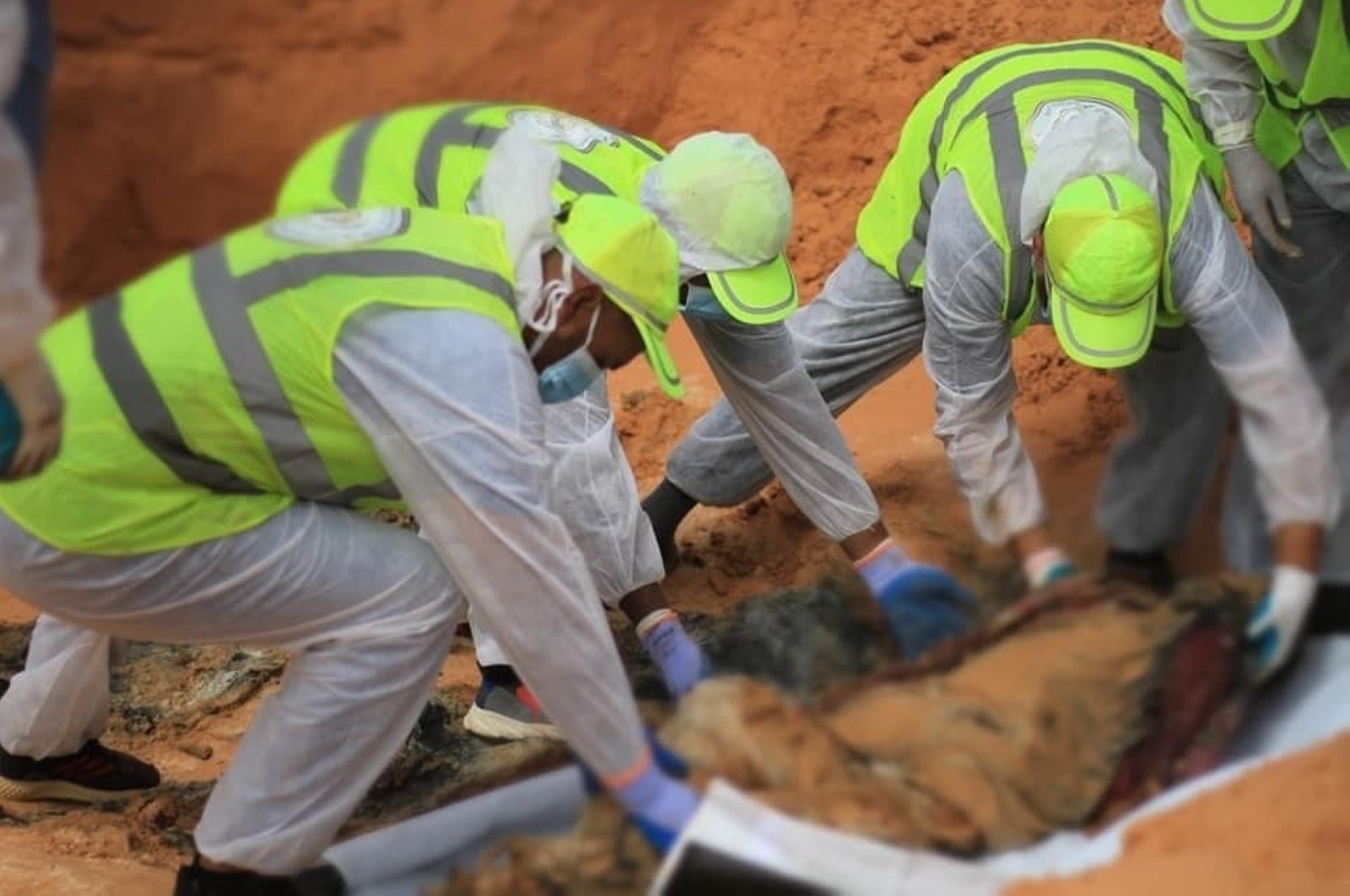 Victims of war crimes committed by Khalifa Haftar militia stand up for themselves, filing a $50M case against the putschist general as newly-found mass graves document the level of atrocities committed by forces loyal to him

Libyan government announced Sunday that a second mass grave has been found in Libya's Tarhuna, a province that has recently been liberated from militias loyal to putschist Gen. Khalifa Haftar.

He has been under fire recently for war crimes in the war-torn country as the victims' families start to seek justice.

According to the announcement of the Tripoli-based Government of National Accord (GNA), five corpses have been found within the grave although the identities are yet to be confirmed.

The first mass grave of Tarhuna was found on Aug. 2, in which similar unidentified corpses were found.

So far, since June 5, the government has unearthed a total of 226 corpses left in mass graves in southern Libya, a region that was occupied by Haftar militias.

The mass graves are only a fraction of Haftar's reported war crimes. Back in June, Human Rights Watch (HRW) documented some of the war crimes committed by the Haftar militias and accused the putschist general of torturing, summarily executing and desecrating the corpses of the Libyan government forces.

Sending a letter to Haftar to take responsibility for his crimes, HRW's attempts to communicate with the putschist general were left unresponded.

In July, the Libyan government stated that it is collecting evidence to prove Haftar militia's war crimes in Libya so that he can be held accountable when the time comes.

Libyan authorities say that Haftar’s militias and allied mercenaries have committed several war crimes and crimes against humanity in the period between April 2019 and June 2020.

Although the conflict still continues in the war-torn country and Haftar is still pursuing his ambition of taking Libya under his control despite many defeats, it seems like the victims of the putschist general's crimes are starting to take a stance for themselves.

The complaint, the third filed in a U.S. court against the military commander, is linked to the 2016-2017 siege of the Libyan district of Ganfouda, which had been encircled for months as Haftar waged a yearslong military campaign to drive groups loyal to the Libyan government from the eastern city of Benghazi.

The fate of civilians trapped in Ganfouda had been a major point of contention, with the United Nations and international human rights groups calling for them to be granted safe passage amid allegations of human rights abuses by both sides.

The criminal complaint, filed in the Eastern District of Virginia, seeks compensatory damages from Haftar, who is a U.S. citizen and previously lived in Virginia, according to media reports. Lawyers for the Libyan families also wrote a letter to Attorney General William Barr, calling him to launch criminal proceedings against Haftar.

"Mr. Haftar and his forces, which are being supported by countries such as Russia, have been accused of horrific war crimes and crimes against humanity by respected international organizations across the world," the families' lawyer said in the letter.

In the complaint, plaintiffs detailed how Haftar's forces, during their assault on Ganfouda in 2016-2017, repeatedly struck their block by shelling and air strikes, preventing their safe evacuation.

Duncan Levin of New York law firm Tucker Levin PLLC, who represents Haftar and his sons, made no comments Friday.

Oil-rich Libya was thrown into chaos after veteran dictator Moammar Gadhafi was ousted in a 2011 NATO-backed uprising. Rival administrations and militias have been vying for power ever since, increasingly drawing in foreign countries and threatening the region's stability.

On Aug. 21, the Presidential Council of Libya's U.N.-recognized government and the Tobruk-based House of Representatives, which supports Haftar, agreed to an immediate cease-fire. Their two statements shared common points, most notably the truce and holding presidential and parliamentary elections.

Despite the accusations and constant callings from the international community to end his offensive, Haftar militia continues to violate the cease-fire and threaten peace in the country.

The attack did not cause casualties nor inflict damage on military hardware, said sources.

The army announced Aug. 27 the first breach of the cease-fire by Haftar's militia, which fired more than one dozen Grad rockets at army positions west of Sirte.

Underlining that the presence of mercenaries fighting for Haftar is a true threat to its workers and facilities all over Libya, NOC chairman Mustafa Sanalla said there were no casualties but this type of unacceptable behavior could have led to human and environmental disaster, calling on Libyan sides and the international community to support immediate demilitarisation of all petroleum facilities in the war-torn country.

Fighting has stalled around the central Mediterranean port of Sirte, the gateway to Libya's eastern oil fields and export terminals, and to the key Jufra air base to the south. Sirte lies roughly halfway between Tripoli in the west and Libya's second-largest city Benghazi in the east.

While the conflict pursues, attempts to establish peace continue as Libya's rival parties conduct consultative talks in Morocco, as part of international efforts to restart political negotiations in the troubled country.

The two-day meetings began on Sunday between a delegate from the GNA and another from Haftar's self-declared Libyan National Army (LNA).

The Tripoli-based administration said the meeting was positive and aimed at reviving the political dialogue between the Libyan parties.

LNA spokesperson Abdullah Belhaq said the goal of these two-day talks is limited to "reaching understandings about the distribution of sovereign positions" before taking the results back to the U.N.-sponsored talks.

In 2015, Morocco hosted peace talks, which led to the creation of the U.N.-backed government in Tripoli.