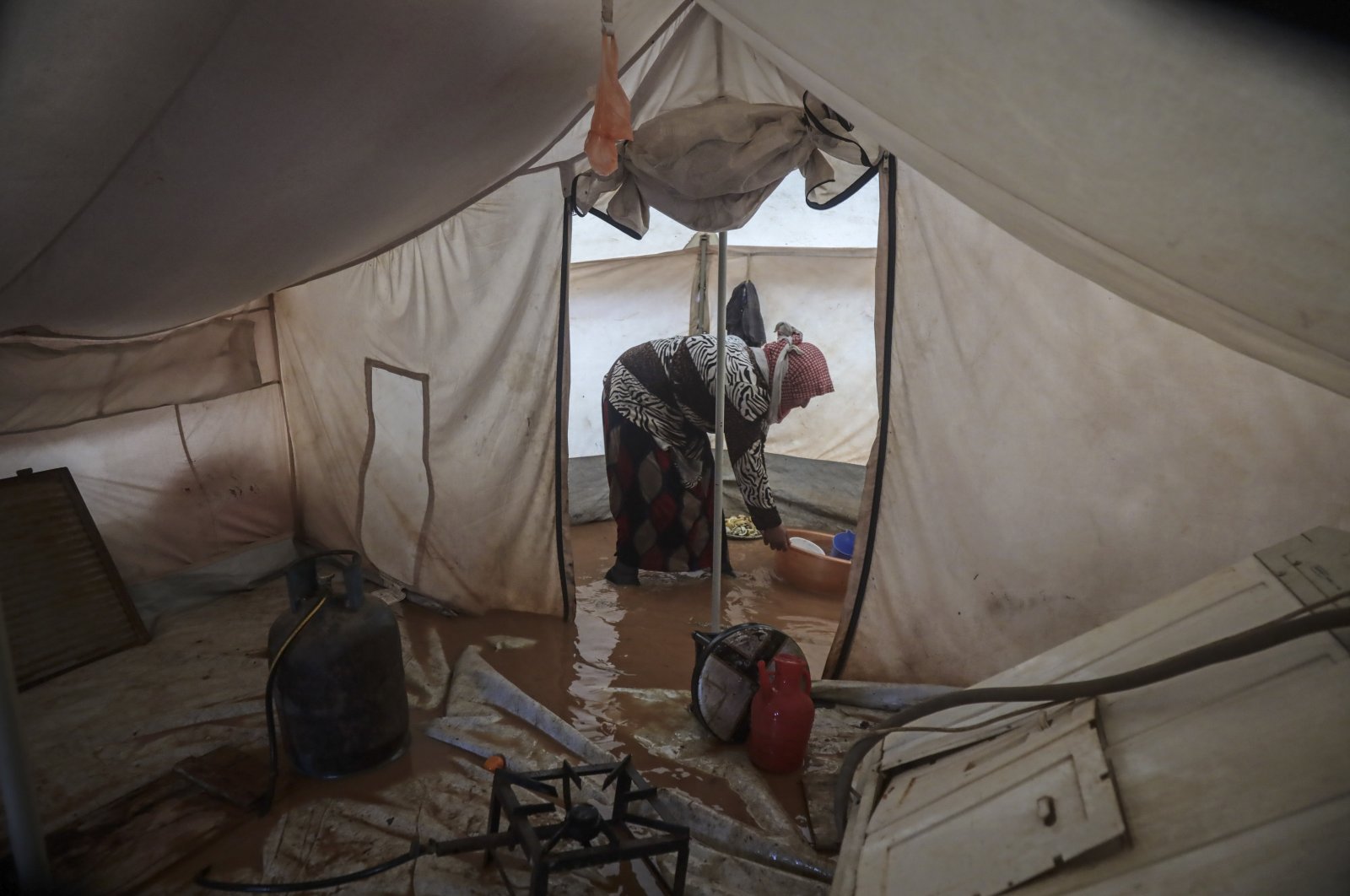 Heavy rains in Syria's Idlib province that started in the night and continued into the day have flooded 110 tents belonging to displaced civilians, affecting 50,000 people as of Monday.

Civilians who fled attacks by the Bashar Assad regime and its backer Russia and now live in safe areas near the Turkish border, were particularly impacted by the weather.

On the dire condition of many of the displacement camps in Idlib as a consequence of the heavy rain, Mark Cutts, the U.N.'s deputy regional humanitarian coordinator for the Syria crisis, late Sunday wrote: “More funding is urgently needed to upgrade these camps and get people out of these appalling conditions.”

Since December 2019, almost a million people have fled the Assad regime’s offensive on Idlib, considered the last opposition bastion, with many seeking refuge in overcrowded tent camps near the Turkish border. A fragile truce was brokered between Moscow and Ankara in March 2020 in response to the months of fighting by the Russia-backed forces, but the regime still frequently carries out attacks on civilians, hindering most from returning to their homes, forcing them to seek safety at makeshift camps.

Ali Hamada, a civilian that sought refuge in Idlib’s Kafarouk camp, told Anadolu Agency (AA) that people have been suffering through the winters for nine years now.

“We have left behind our house and fields and have rented agricultural land. No one is supporting us,” he said.

Hamada, saying that people struggle to clear water from their tents, added: “The rain continues; we have nowhere to go; our tents are flooded.”

Nisrin Kaddour, another resident of the camp who is a mother of five, said that she and her family had to abandon their tent due to the flooding.

“All our belongings have been flooded; we have no clothes anymore. We have no blankets to get warm; my children got sick,” she said.

On top of the flooding, displaced civilians living in the tents struggle to find the means to warm themselves during the harsh winter months. Civilians burn old clothes, nylon fabrics and plastic to try and get warm, putting their health at risk as the fumes can lead to respiratory illnesses such as asthma and bronchitis. Fires are a common and real threat at the camps given their potential to spread. In May of last year, there were seven outbreaks in one month at the tent camps in the Turkey-Syria border zone, resulting in the deaths of two civilians. In the village of Deir Hassan, north of Idlib, some 20 tents were completely destroyed in a blaze that caused significant material damage to the camp.

Saying that she and her family have no place to go, Kaddour is calling on nongovernmental organizations (NGOs) and philanthropists for help.

Mohammad Hallaj, the director of Syria's Response Coordination Group, which gathers migration data in the region, said over 108 tents had been damaged by the heavy rains in the past 48 hours.

According to Cutts, although new camps are in the process of being built to house the 1 million displaced last year, “new camps is not the solution. What people want is an end to the war and to be able to return safely to their original homes.”

Back in June 2020, President Recep Tayyip Erdoğan pledged to fund the construction of 50 briquette homes for civilians in Idlib, saying Turkey planned to fulfill the target during the summer so the shelters would be ready for the refugees before winter sets in. First lady Emine Erdoğan also donated funds to subsidize 57 briquette homes. Since then, multiple humanitarian agencies from Turkey have participated in the construction of the briquette houses, among other aid services.