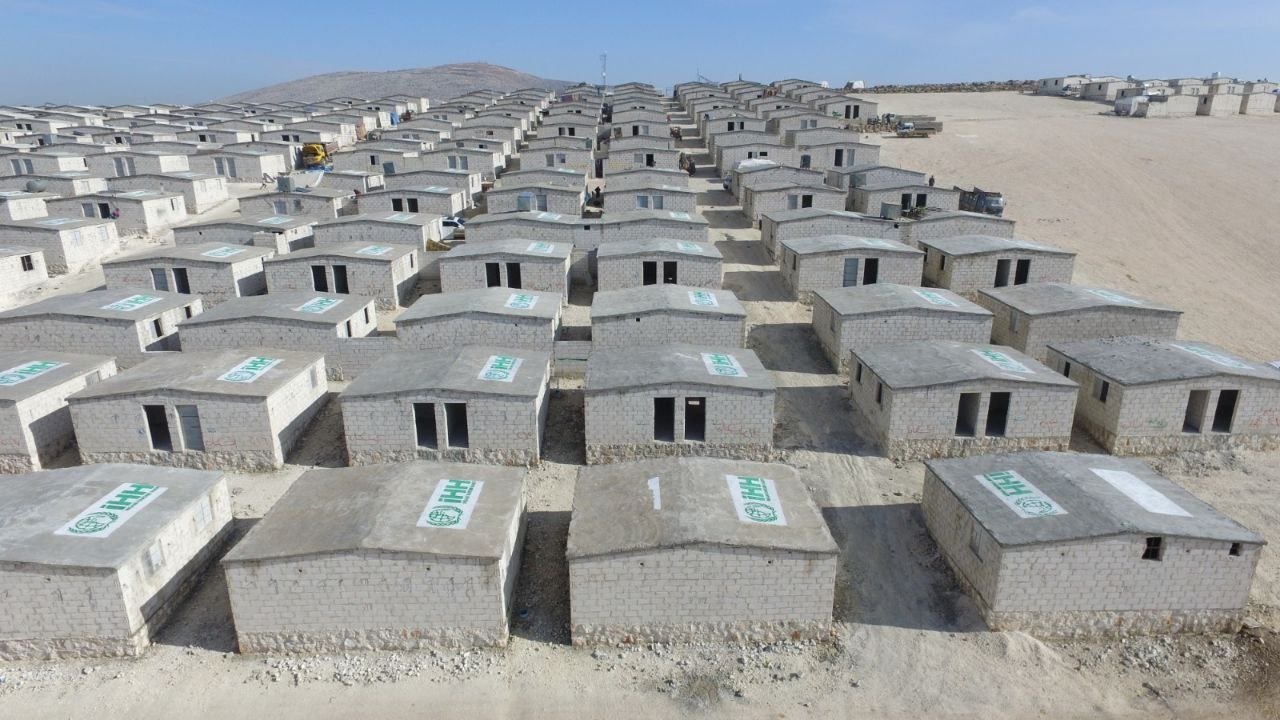 Residents of the Syrian northwestern province of Idlib, freshly settled into Turkish-built briquette houses, on Thursday invited European Commission President Ursula von der Leyen to visit the region to observe the developments in the province.

The invite from the locals came following President Recep Tayyip Erdoğan's call on von der Leyen Tuesday to monitor the progress made on the Syrian border more closely and to contribute to Turkey's efforts in the region.

Moving from fragile tents to briquette houses that were built by Turkish humanitarian agencies with the support of the Turkish government, the locals have praised the advancement in their living conditions and want the world to acknowledge it.

"May God never allow anyone to suffer from a life in a tent. There was wind, rain, cold ... We could not protect our children. Our properties were flooded," said 70-year-old Fatma al-Abed, who escaped from Syrian regime attacks and has taken refugee in the camps in Idlib.

Expressing that she recently moved to the newly built briquette houses, Abed highlighted her gratefulness to Turkey.

"Thank God for Erdoğan. He protected us, took care of us and provided us with shelter. Ms. Leyen, we invite you here. You should come and see how people are living here," Abed told Anadolu Agency (AA).

Erdoğan, during his address to the EU countries' ambassadors on Tuesday in the capital Ankara, said: "The 2016 migrant agreement signed with the EU needs to be updated. There were promises from the union on assisting Turkey's efforts for refugees, such as building briquette houses on the border, but none of them were met."

Upon inviting von der Leyen to the region, the president stated that the initial plan of Turkey building 50,000 briquette houses on the Syrian border is moving swiftly, as the construction of more than half of the houses have already been completed.

"We are also working on the infrastructure of the region at the same time. But I believe that until the time we visit the region together with you, that work will be completed. When you visit, you will see Turkey's efforts and how the displaced people in Idlib, the ones who are facing death all the time, are waiting for these briquette houses to be built with excitement," Erdoğan said.

Another resident of the briquette houses, Suphi al-Abid, on the other hand, said that he had to move multiple times and suffered in camps filled with tents until he settled into his current accommodation.

"Freezing cold, negative weather conditions were very active. Then there were summers, which were getting hotter each year," he said.

According to Abid, even the basic human necessities are missing in the tents, from infrastructure to health facilities.

"There is nothing that could ease people's lives. I hope the EU authorities will accept Erdoğan's invitation and visit us, displaced people," he emphasized.

"We hope for them (the EU authorities) to assist the civilians in here to move from tents to the briquette houses," Halid Shaar, also a briquette house resident, said on the issue.

Under the deal, Turkey was promised 6 billion euros ($6.77 billion) in financial aid, which was initially designed to be given to the country in two stages and to be used by the Turkish government to finance projects for Syrian migrants. Visa freedom for Turkish citizens was also a perk of the agreement, and the customs union was to be updated.

Idlib is currently home to about 4 million civilians, including hundreds of thousands of displaced in recent years by regime forces throughout war-torn Syria, with some likely using a recent cease-fire brokered by Turkey and Russia as an opportunity to return home.

Around 1 million Syrians were displaced from Idlib province when the Bashar Assad regime and its allies launched an offensive in November 2019.

Back in June 2020, Erdoğan pledged to fund the construction of 50 briquette homes for civilians in Idlib, saying Turkey aimed to fulfill its goals to build homes in the summer so refugees can take shelter before winter sets in. First lady Emine Erdoğan also donated funds for the provision of 57 briquette homes.

Since then, multiple humanitarian agencies from Turkey are participating in the construction of the briquette houses, among other primary aid activities.

In this respect, the Istanbul-based Humanitarian Relief Foundation (IHH) announced on Thursday that in cooperation with the Kuwait-based Sheikh Abdullah Nouri Charity, the foundation distributed 750 boxes of food and 370 blankets in Idlib, providing aid to a total of 5,000 residents recently.

Apart from providing aid, Turkey also contributes to education in the region, as course centers in Idlib's city center provide Turkish language education for the locals.

Opened specifically for the female residents, Al-Irade Course Center has been one of the hot spots in Idlib recently, as its Turkish lessons have gained major attention from the residents with many applying to participate in the program.

"In order for women to be more prominent figures in Syrian society, we started to provide Turkish lessons since Turkish is more used in the areas cleared of terrorism," Houria Al-Hussein, who works in the course center, told Ihlas News Agency (IHA).

In Hussein's opinion, the high demand shows that they are doing something right, even though they had to limit the number of students due to the pandemic.

The course provides training for free considering the monetary situation of families in Idlib.