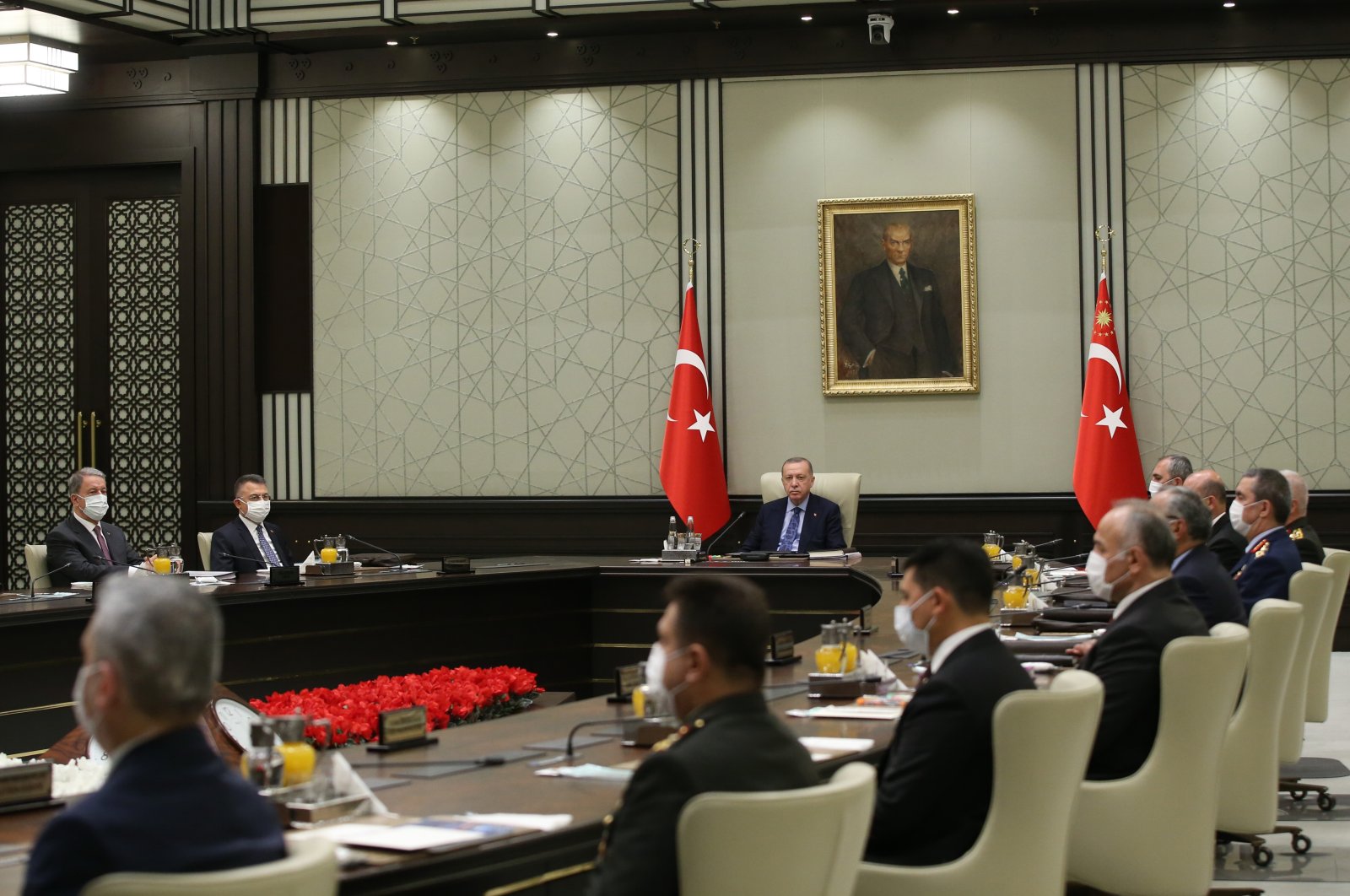 The council had many topics of discussion on the table: Recent tensions in the Caucasus, Middle East, northern Africa and the Aegean Sea. Fight against terror and drilling activities were also discussed in detail in the meeting that lasted nearly three hours

The National Security Council (MGK) was convened by President Recep Tayyip Erdoğan on Wednesday. The main topics of the assembly were the recent tensions between Azerbaijan and Armenia and developments in war-ravaged Libya.

The MGK also discussed other important topics such as drilling activities in the Eastern Mediterranean, fight against terror both at home and abroad, particularly in northern Syria and Iraq; in addition to peace efforts in Cyprus.

The MGK also reaffirmed Turkey’s steadfast support to the internationally-recognized government of Libya.

"Turkey will continue to side with Libya's legitimate GNA government," the MGK said in a statement released after the meeting.

Saying that all countries need to back the U.N.-recognized Government of National Accord (GNA), the MGK also urged the international community against aiding putschist Gen. Khalifa Haftar.

Libya has been mired in strife since NATO operations led to the overthrow of former dictator Moammar Gadhafi in 2011.

The country's new government was founded four years later in 2015 under a U.N.-led agreement, but efforts for a long-term political settlement have so far failed due to a military offensive by Haftar's forces.

Since April 2019, Haftar's forces have launched attacks on the Libyan capital of Tripoli and other parts of northwestern Libya, resulting in more than 1,000 deaths, including civilians.

Haftar has the support of the United Arab Emirates, Egypt and Russia while the U.N.-recognized government is backed by Turkey. The Libyan government has recently achieved significant victories against Haftar, pushing his forces out of Tripoli and the strategic city of Tarhuna.

This week is also a busy one for Turkey in terms of diplomatic efforts as Libya peace talks at a trilateral meeting in Ankara kick off and side talks with regional countries such as Algeria continue.

The maritime pact asserted Turkey's rights in the Eastern Mediterranean in the face of unilateral drilling by the Greek Cypriot administration, clarifying that the Turkish Republic of Northern Cyprus (TRNC) also has rights to the resources in the area. The pact took effect on Dec. 8.

As part of the military deal, Turkey has sent advisers to help the Libyan Army defeat Haftar's militias. Erdoğan said Friday that Turkey would "not allow our Libyan brothers to stand alone," heralding a new deal with the Libyan government, this time with the involvement of the U.N.

A permanent topic of discussion when it comes to MGK meetings is unfortunately the fight against terror as Turkey has been fighting against terrorism for decades with the reality of terror becoming increasingly multifaceted by the day.

Ankara which has been fighting PKK terror for over 40 years, has also been facing threats for a long time from the Gülenist terror group (FETÖ), which tried to overthrow the country’s democratically-elected government on July 15, 2016 coup attempt. The country also fights PKK’s Syrian affiliate PYD/YPG and Daesh terrorists in northern Syria.

The MGK underlined that Turkey won’t back off from its fight against terror. Saying that the country will continue to fight YPG/PYD and Daesh terrorists in Syria, the MGK also stated that Turkey will not let the PKK find a safe haven in northern Iraq either.

The council also discussed the fight against FETÖ terror and emphasized the country’s resolve and commitment in protecting its citizens from the threats the group poses, both at home and abroad.

Tensions between Azerbaijan and Armenia

"Turkey once again emphasizes that it will support any decision by Azerbaijan, in its just cause," the Council added.

"Armenia needs to end its aggressive attitude and leave Azerbaijani territories it illegally holds under occupation," it concluded.

The recent rise in tensions was triggered when the Armenian army on Sunday attempted to attack Azerbaijani positions with artillery fire in the direction of the northwestern Tovuz border district, withdrawing after suffering losses following retaliation from the Azerbaijani military.

Twelve Azerbaijani soldiers, including a major general and a colonel, were killed in recent border clashes with Armenia that injured four others. Despite international calls for restraint, Armenian troops also opened fire on nearby residential areas.

A 76-year-old Azerbaijani man lost his life Tuesday in the attacks by Armenia, which Baku has accused of concealing losses.

Addressing reporters in Istanbul, Erdoğan also recently said Turkey will not leave Azerbaijan alone in the face of Armenia’s recent aggression and accused the OSCE Minsk Group of leaving the issue of Nagorno-Karabakh on the table without an effort for resolution.

The OSCE Minsk Group was created in 1992 to encourage a peaceful, negotiated resolution to the conflict between Azerbaijan and Armenia over Nagorno-Karabakh. The Minsk Group is headed by a co-chairmanship consisting of France, Russia and the U.S.

The MGK also underlined Turkey's resolve in protecting Cypriot Turks and its willingness to contribute to peace efforts in the divided island.

The council also emphasized that Turkey will not allow any country or actor to undermine peace efforts on the island.

"The countries and actors, who ignore Turkish society's existence and rights on the island, will not be allowed to undermine peace efforts," the MGK said.

"Turkey emphasizes its total commitment to protect its rights and interests arising from the international law," the council added.

The recent tensions between Turkey and Greece were reportedly one of the topics of discussion in the MGK.

An advisory known as NAVTEX was issued by the Turkish navy on Tuesday for seismic surveys by the Oruç Reis and two support vessels in waters south of the Greek islands of Rhodes, Karpathos and Kastellorizo (Meis in Turkish, Megisti in Greek) through Aug. 2.

Greek Prime Minister Kyriakos Mitsotakis said earlier Tuesday that unless Turkey backed down, European Union sanctions against its NATO ally could be inevitable.

The Foreign Ministry said that the Greek island of Kastellorizo is 2 kilometers (1.2 miles) away from the Turkish mainland and 580 kilometers off the Greek coast, making “Greece’s maximalist continental shelf claims based on islands far from its mainland incompatible with international law and court decisions.”

The ministry also reiterated calls for dialogue and said Turkey would continue to protect its rights and interests in line with international law.

If Turkey adheres to Greece’s maximalist claims, it would make it nearly impossible for Ankara to do any kind of drilling in the waters surrounding the country. That is why Turkey has many times rejected Greece’s absurd claims and continued its drilling activities in line with international law.

The MGK also reportedly discussed Turkey’s resolve and commitment to continue its drilling activities wherever the international laws and conventions allow it to.

Turkey has intensified hydrocarbon exploration and drilling activities in the Eastern Mediterranean despite the ongoing COVID-19 pandemic.

The country is conducting exploration activities in the Eastern Mediterranean with two drilling vessels – the Fatih and the Yavuz – along with the Oruç Reis and the Barbaros Hayrettin Paşa seismic ships.