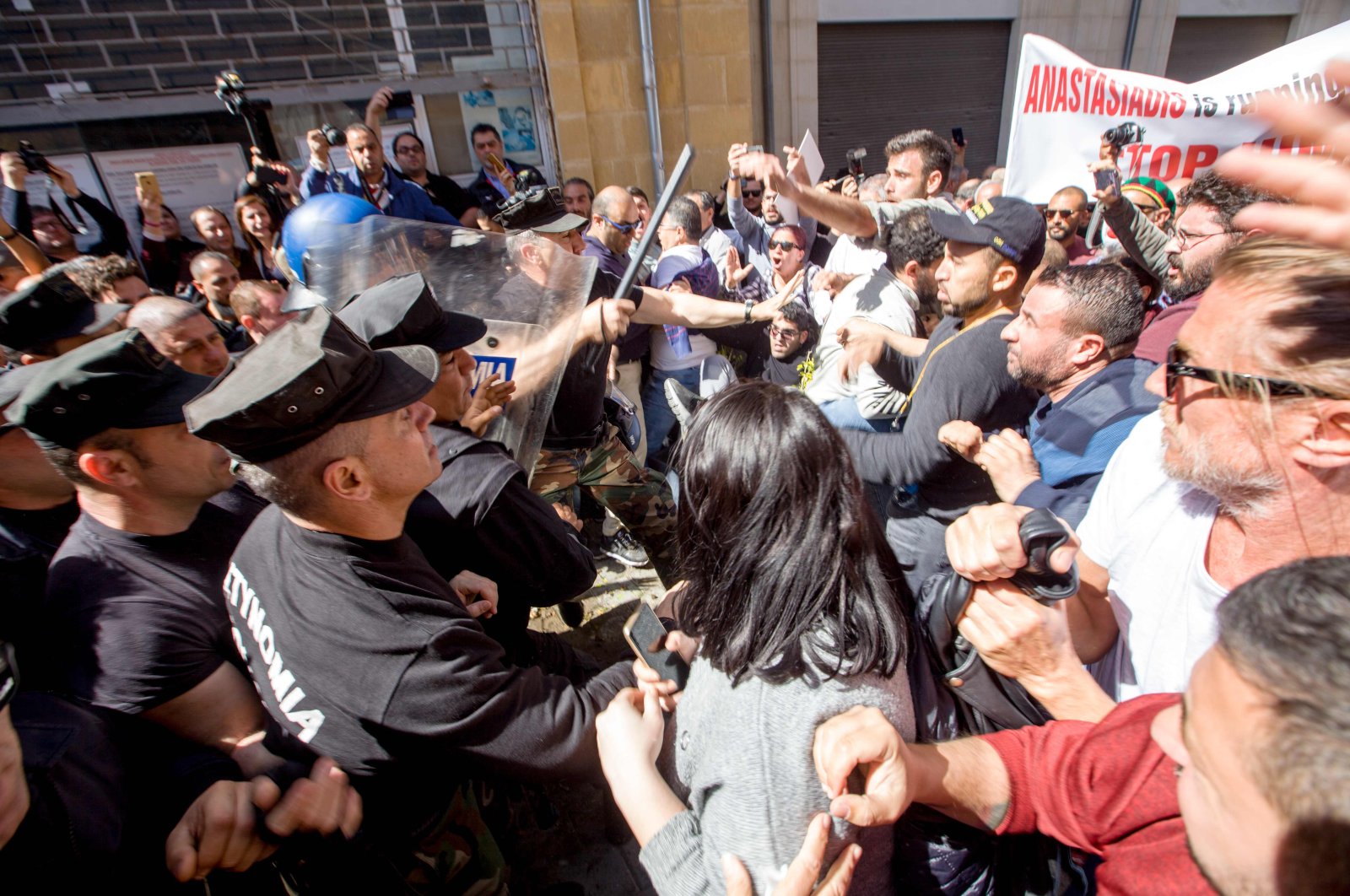 Protesters clash with Greek Cypriot police during a demonstration on March 7, in the U.N. buffer zone separating the island from TRNC and Greek, Cypriots over fears of the spread of COVID-19 coronavirus. (AFP Photo)
by Compiled from Wire Services Mar 09, 2020 3:18 pm
RECOMMENDED

The protests that erupted on both sides of the border between the Turkish Republic of Northern Cyprus (TRNC) and Greek Cyprus on Saturday due to the latter’s unilateral decision to close border gates due to the COVID-19 outbreak continued Monday. The demonstrations took place at the Lokmacı border gate, one of four gates closed by the Greek Cypriot side. Protestors also chanted slogans against the presence of U.N. soldiers.
After the clashes, U.N. called for coordination between two sides.

On Saturday, Greek Cypriot police sprayed tear gas on an estimated 200 Greek Cypriots and 150 Turkish Cypriots gathered on either side of the Ledra Street crossing in central Nicosia to demand the checkpoints be re-opened. While four officers were injured in scuffles with demonstrators where police made "limited use" of personal tear gas spray to control the crowd, police said. They said no arrests were made.

Activist group Unite Cyprus Now organized the protest, with demonstrators chanting "Peace in Cyprus cannot be stopped" and "Contain the virus of partition."

Greek Cypriot authorities closed four of the eight checkpoints on the line dividing the island last Saturday for an initial seven-day period "for more effective control over the entry points." Health Minister Constantinos Ioannou said last week that the decision to close the crossings was not political but due to a shortage of medical personnel to monitor the crossings.

The U.N. said Thursday it was concerned by the ongoing disruption caused to people on both sides.

"While the U.N. supports all effective measures to address any potential public health emergency, it is imperative for the two sides to coordinate closely in order to provide a comprehensive response," it said.

"This one-sided decision was not a correct decision, it should be revised," he told Cypriot President Nicos Anastasiades in a telephone call.

Another brawl erupted between U.N. soldiers and TRNC police as U.N. soldiers tried to take measures on the TRNC side. Turkish Cypriot police pushed behind U.N. soldiers into the neutral area after the soldiers ignored warnings of TRNC security forces.

A soldier and 20-year-old were suspected cases of the coronavirus on Greek Cyprus side led it to put an army camp on quarantine, Cyprus Mail reported Sunday.

An army camp in Nicosia was under quarantine on Sunday after it was looking at a suspected Covid-19 case while results are still pending for a separate case of a 20-year-old that had been arrested and taken to a police station in Nicosia.

The soldier, who returned to the island from the Greek city of Patra, a region with the most cases in that country, revealed symptoms and was taken to a hospital in Nicosia for treatment.