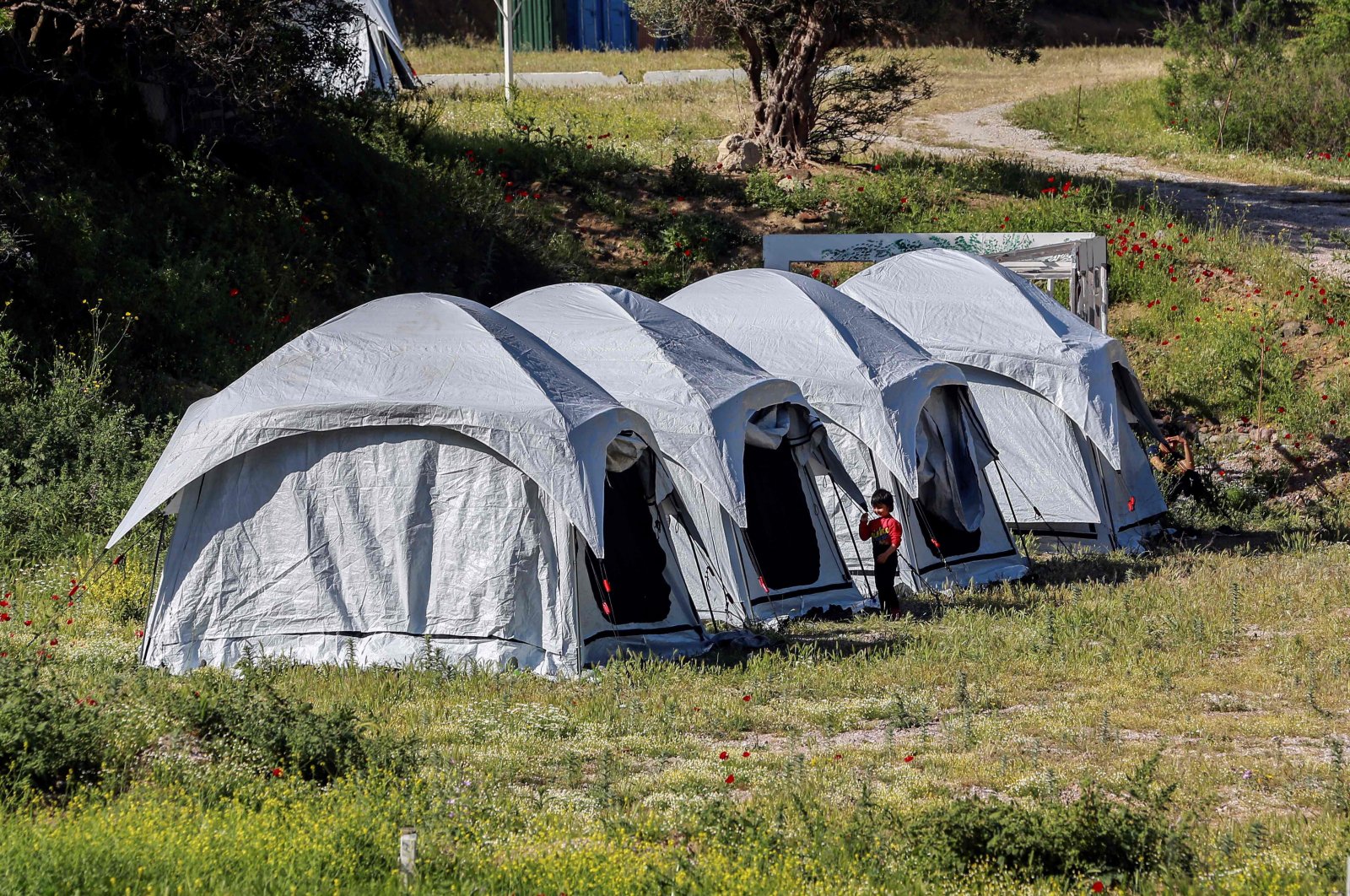 Children play outside the tents at a migrant and refugee camp where cases affected by the COVID-19 were detected, on the Greek mediterranean island of Lesbos, May 13, 2020. (AFP)
by DAILY SABAH WITH AGENCIES May 15, 2020 11:52 am
RECOMMENDED

Two more asylum-seekers who recently arrived on Greece's Lesbos island, the site of the country's biggest migrant camp, have tested positive for the coronavirus, migration ministry sources said on Friday.

The cases, doubling the island's COVID-19 infection tally to four, were among the 70 arrivals there so far during May.

Since March 1, all migrants reaching Lesbos have been quarantined away from the island's camps. Those include the overcrowded Moria facility, hosting more than 17,500 asylum-seekers by the latest official count on May 13, and frequently criticized by aid groups for poor living conditions.

There have been no documented coronavirus cases there, however.

Greek migrant camps will remain under lockdown until May 21.

So far, there have been confirmed COVID-19 cases in two camps and at a hotel on the mainland – although none in migrant camps on the islands, where the worst congestion occurs.

There are over 33,000 asylum-seekers and migrants packed into camps on the islands of Lesbos, Chios, Samos, Leros, and Kos that were originally built to handle fewer than 6,100 people.

With an aim to save the migrants from the dangers of the illegal route, the Turkish Coast Guard Command has been working hard on the shores, rescuing migrant boats nearly every day.

The last group of migrants was saved on Thursday when Coast Guard Command teams rescued at least 30 asylum-seekers from two boats in the Aegean Sea.

Congolese, Syrian, Bangladeshi, Palestinian and Lebanese nationals were on the stranded boats.

In the last two months, Turkish security guards rescued more than 170 asylum-seekers off the Aegean coast after they were forced by Greece into Turkish territorial waters.

Greece's response to those trying to enter the country without prior authorization has been harsh. At least three migrants have been killed by Greek security forces on the land border with Turkey, many others have been battered and teargassed.

Turkish officials said earlier last month that the Greek coast guard had attempted to sink boats carrying migrants and refugees heading toward the Greek islands by opening fire and hitting the people on the boats with long sticks.

Meanwhile, as more and more migrants are crossing, Europe is closing its ports and no humanitarian ships are carrying out rescues. As the coronavirus pandemic dominates headlines, activists fear the Mediterranean is the scene of an overlooked "tragedy."

A handful of migrant landings have taken place in recent weeks, including 79 people who arrived last weekend in Italy, a country under fire even before the outbreak for refusing to allow private vessels carrying migrants to dock.

"If there is no help at sea and countries drag their feet to rescue and allow people to disembark, we're going to end up with a fairly serious humanitarian situation," said Vincent Cochetel, special envoy for the central Mediterranean with the United Nations High Commissioner for Refugees (UNHCR).

He estimates that 179 people have died in the area since January.

Italy and Malta closed their ports at the beginning of April as the pandemic hit Europe hard. At that time, only two rescue boats were operating, the Alan Kurdi vessel run by the German NGO Sea-Eye, and Aita Mari chartered by the Spanish organization Maydayterraneo.

Both have now been anchored by the Italian coastguard for "technical" problems, a move denounced as unjustified by campaign groups.

Meanwhile, Malta's Prime Minister Robert Abela said last month that he was under investigation for his role in the death of at least five migrants who tried to sail from Libya to Italy. A Maltese patrol boat allegedly cut the cables of the migrant dinghy's motor.

The situation is all the more dire, Cochetel said, as departures from the Libyan coast have nearly quadrupled compared with the same period a year ago, with 6,629 attempts to reach Europe between January and the end of April.

The number of departures from Tunisia had more than doubled, Cochetel said.

"Whether or not there are (rescue) boats at sea, it has no influence on departures – this period of coronavirus has amply proven that," he said.

The central Mediterranean "remains the most dangerous maritime migration route on Earth," the International Organization for Migration warned.

"In the current context, risks that invisible shipwrecks are occurring out of sight of the international community have grown," it said.