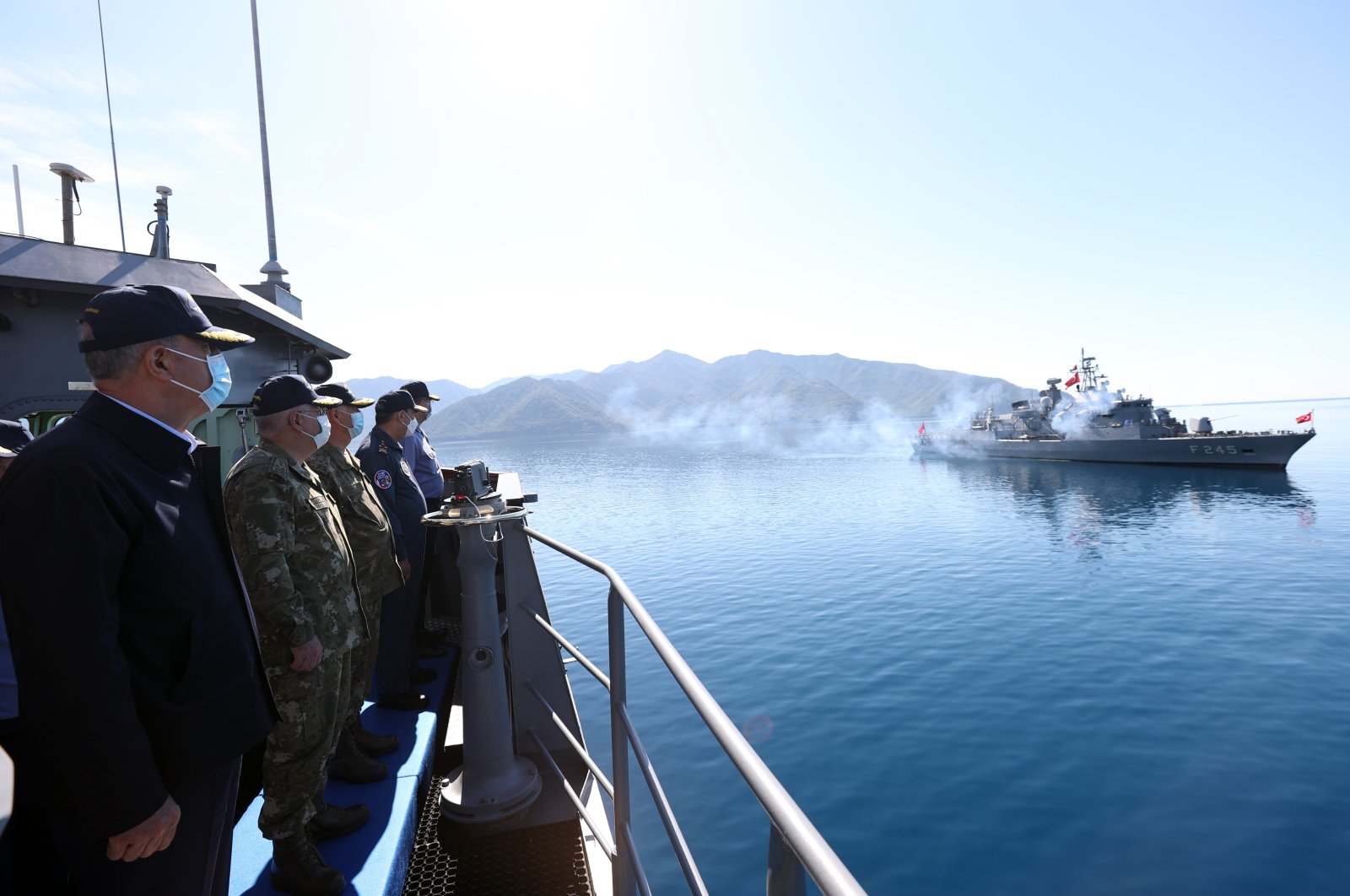 Akar arrived aboard the "flagship" of the exercise, TCG Salihreis. He was greeted by the commander of the navy, Adm. Ercüment Tatlıoğlu. Akar and the TSK command echelon were presented with a hat with the name of the ship and taken to the area where the exercise would be conducted.

In his speech on the TCG Salih Reis, Akar stated that with this exercise, Turkey once again displayed the capabilities of its naval command and navy.

Akar, who added that the TSK continues its duties and efforts for lasting peace and stability in three continents from Libya to Azerbaijan, said that Ankara showed its capability in defending its rights and interests in the seas with this exercise.

He also reiterated that Turkey will continue its efforts in the field of counterterrorism operations until the last terrorist is eliminated.

“We want to see the riches of the geography being shared fairly. We don't have eyes on others' rights."

The TCG Oruçreis fired 19 salute shots for the flagship carrying Akar, which was leaving the port. In the exercise, in which underwater defense special teams (SAS) destroyed mines drifting at sea with "tactical claw operation," Special Boat Squadron (SAT) teams also demonstrated their skills and abilities.

SAT personnel, who dove into the sea from a helicopter, destroyed their determined targets under water, and another SAT team parachuted onto the island and hit the targets there. Within the scope of the SAT operation, another team descended from the helicopter onto the target ship by rope and carried out the operation there.

The exercise continued with the destruction of moored mine. The mine, identified by the TCG Alanya, was destroyed by mine divers after it was detected by an autonomous underwater vehicle.

In the exercise, anti-submarine warfare was also carried out. For this, the Seahawk helicopter scanned the sea to detect the submarine. A maritime patrol plane was dispatched to the region, and the submarine was hit by a torpedo from the plane.

Talking about the activities, Rear Adm. Ismail Güldoğan, chief of operations of the naval command, emphasized that the amount of ammunition used is kept at a minimum level in all activities to avoid any harm to sea creatures and the environment.

Some 133 surface ships, 10 submarines, 43 aircraft, 28 helicopters and 14 unmanned aerial vehicles of the TSK participated in the exercise.

With the operation, the TSK aims to supervise the dispatching and administration efficiency of the headquarters and operation centers, to evaluate the decision-making processes in a multi-threat environment, to test the interoperability methods and mutual support capabilities, and to increase the training levels of the naval elements.

Qatar Navy Cmdr. Abdulla Ali Al-Mazroey as well as the military attaches of 25 countries attended the distinguished observer day of the exercise.