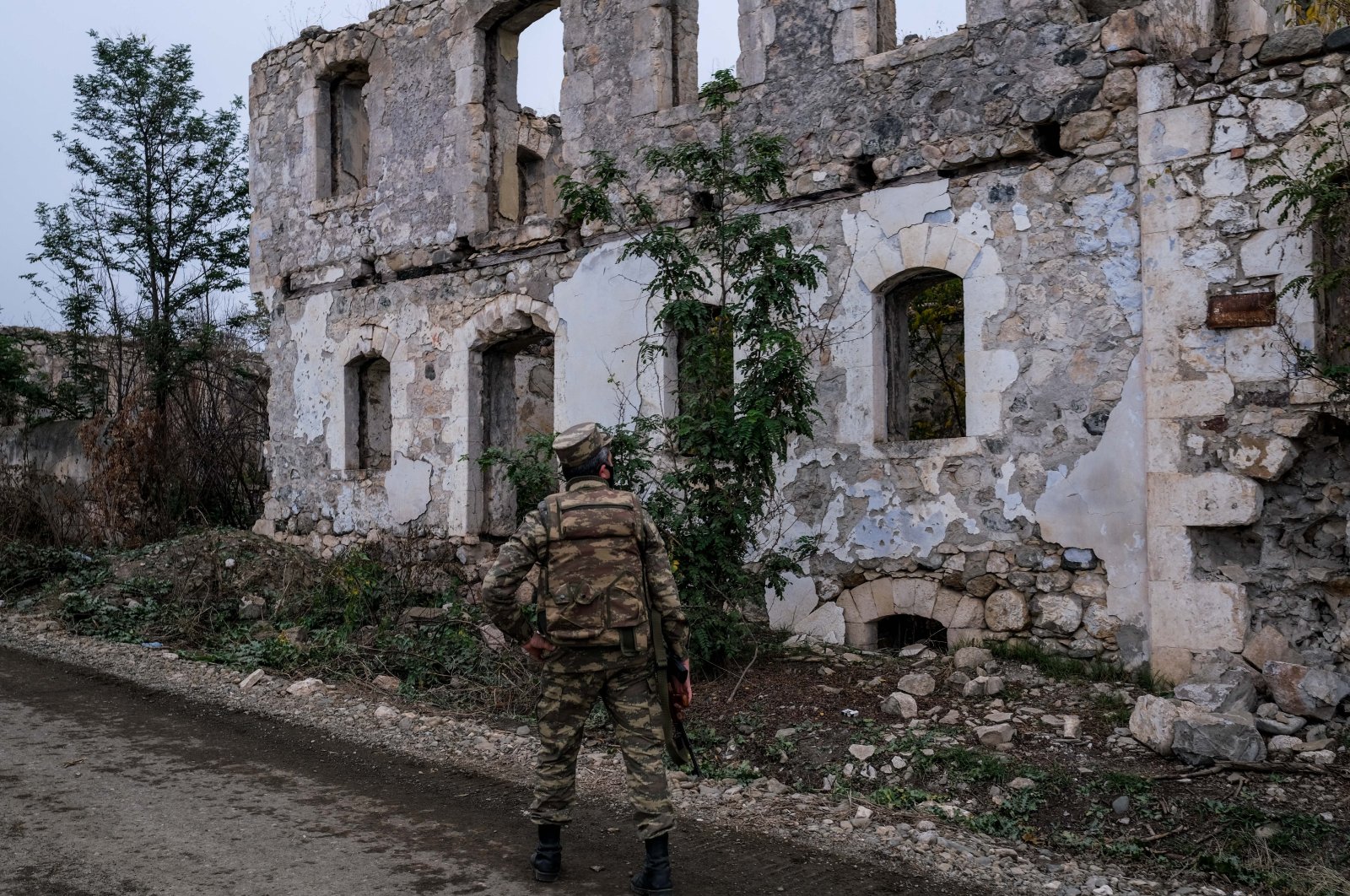 A destroyed building is seen in the city of Fuzuli, liberated from Armenian occupation, in this undated file photo. (Sabah File Photo)
by DAILY SABAH Oct 18, 2021 10:02 am
RECOMMENDED

Azerbaijani President Ilham Aliyev criticized Armenia for the atrocities they committed in Nagorno-Karabakh, as he visited the city of Fuzuli on the first anniversary of its liberation from occupation.

“Everyone who comes to Fuzuli sees the degree of Armenian violence,” Aliyev said, as he visited the area to mark liberation and attend groundbreaking ceremonies on Sunday.

The Azerbaijani president said Fuzuli was one of the areas that suffered destruction, evident by the fact that they could not find a single building where they could raise the Azerbaijani flag.

“Everyone who comes here sees Armenian violence and nobody can deny this,” Aliyev said.

Noting that the Azerbaijani military liberated Fuzuli and some other towns from Armenian occupation, Aliyev said Oct. 17 will be a special date for Azerbaijanis as it marks Azerbaijani sovereignty in Fuzuli.

Aliyev said the liberation of Fuzuli, a strategic town, provided opportunities for the Azerbaijani military to proceed into Shusha. He also noted that more Armenian soldiers started deserting the army after Azerbaijan’s victory, which provided the latter with moral strength.

The destroyed town will undergo an extensive renovation process, according to Aliyev, who said residents will be able to safely return to their homes, but the area needs to be carefully de-mined, as there are over 100,000 mines in the area.

Following the 44-day conflict launched back in September 2020, as Azerbaijan declared a definite victory, Armenian forces left the region after vandalizing the houses and looting everything they could on their way out. Now, it is difficult to find a building in the cities of Nagorno-Karabakh, including Jabrayil, Fuzuli and Lachin, that have not been reduced to piles of stones. Although the symbolic city of the region Shusha was relatively luckier than the others in terms of surviving the vandalism, the religious and cultural monuments in the city still suffered from the aftereffects of the war.

The priority of the Azerbaijani army is to clear the area of mines planted by Armenian forces and secure the region. So far, since the end of the conflict, 14 Azerbaijanis have lost their lives due to the mines.

Apart from clearing the mines, Azerbaijan also kicked off efforts to come up with plans and projects for the region while determining the damage and its costs to the region as well. The Azerbaijani government plans to carry the issue to the international courts once it is able to assess the overall damage in the region caused by Armenian forces.

Relations between the former Soviet republics have been tense since 1991 when the Armenian military occupied Nagorno-Karabakh, a territory recognized as part of Azerbaijan, and seven adjacent regions. Fresh clashes erupted between Armenia and Azerbaijan in late September, rekindling the Caucasus neighbors' decadeslong conflict over the region. During the conflict, Azerbaijan liberated several towns and nearly 300 settlements and villages from Armenian occupation.

Fierce fighting persisted for six weeks despite efforts by France, Russia and the United States to broker cease-fires, before Armenia and Azerbaijan signed a Moscow-brokered peace deal on Nov. 9. The agreement was signed after Baku's army overwhelmed separatist forces and threatened to advance on Karabakh's main city Stepanakert (Khankendi).