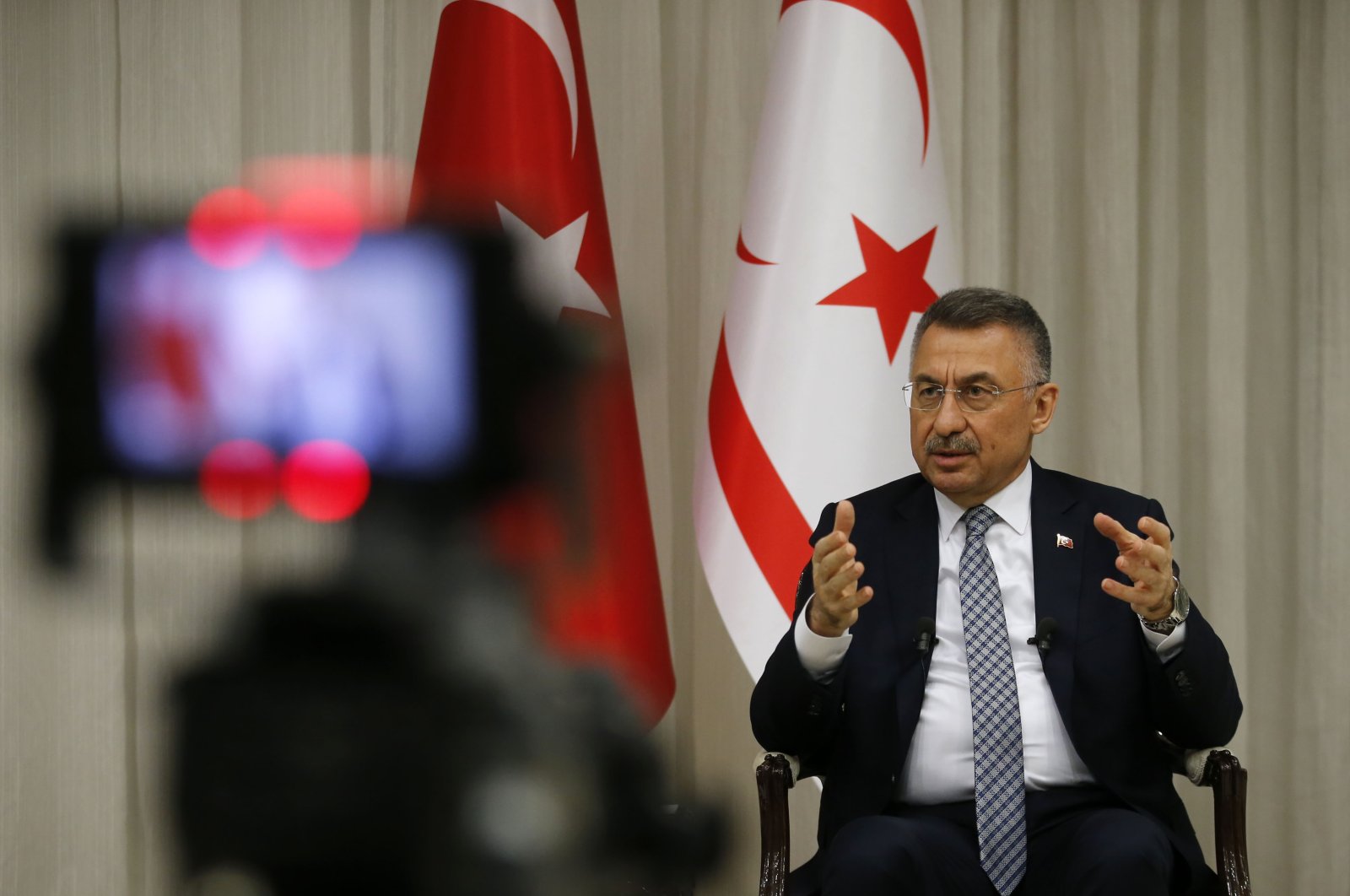 Vice President Fuat Oktay speaks on a live broadcast on the BRT TV channel in the Turkish Republic of Northern Cyprus (TRNC), Feb. 10, 2021. (AA Photo)
by DAILY SABAH WITH AA Feb 11, 2021 9:08 am
RECOMMENDED

Turkish Vice President Fuat Oktay on Wednesday reiterated the necessity of a two-state solution to the decadeslong problem on the island of Cyprus.

"We can talk and negotiate on the basis of two equal states and two equal societies on Cyprus," said Oktay, speaking to Turkish Republic of Northern Cyprus (TRNC) state broadcaster BRT.

"We can talk about how to fill this in, but now the (the idea of a) federal state is left behind," added Oktay, who paid an official visit to the TRNC.

Oktay also criticized some European Union member states for allowing their foreign policy to be monopolized and constantly threatened by the Greek Cypriot administration and Greece.

"They are unable to make decisions based on their own will," Oktay said, adding that the threats cast a shadow on peace talks. He continued by referring to President Recep Tayyip Erdoğan's remarks on Greece and Cyprus, as he said that the two sides can start discussing the two-state solution now.

The vice president also said the Greek Cypriot administration has never been willing to share the power, resources or anything else on the island with the Turkish Cypriots, as he accused them of trying to assimilate the latter.

Turkey has recently stressed that efforts for a "federal" solution have proved hopeless and any future talks must focus on two separate sovereign states on the island.

The TRNC was founded in 1983. Currently, the country has a population of almost 400,000 people. Even though it is not recognized by any country other than Turkey, it is a model state in terms of its democracy and freedom. A 2016 Freedom House report called the nation "free" when it comes to political rights and civil liberties.

On tensions in the Eastern Mediterranean, Oktay recalled a proposal from Turkey for a multilateral conference on the issue.

"Both the EU and the U.N. welcomed this ... We said, 'Of course, on one condition: representatives of the Greek Cypriot community are invited to this conference together with those of the TRNC. They come together or not at all,'" he said.

"Problems in the Eastern Mediterranean can be discussed with all clarity," Oktay added.

Noting that with the discovery of hydrocarbon resources in the Eastern Mediterranean, Cyprus became a focal point for many countries, Oktay said these resources should be fairly shared.

Tensions have been running high for months in the Eastern Mediterranean as Greece has disputed Turkey's rights to energy exploration.

Turkey, the country with the longest coastline in the Eastern Mediterranean, sent out drillships to explore for energy on its continental shelf, asserting its rights in the region as well as those of the TRNC.

Greece has made maximalist maritime territorial boundary claims based on small islands just kilometers off the Turkish coast. To reduce tensions, Ankara has called for dialogue and negotiations to ensure fair sharing of the region's resources.