'Turkey's ties with Africa humanitarian, based on mutual partnership' 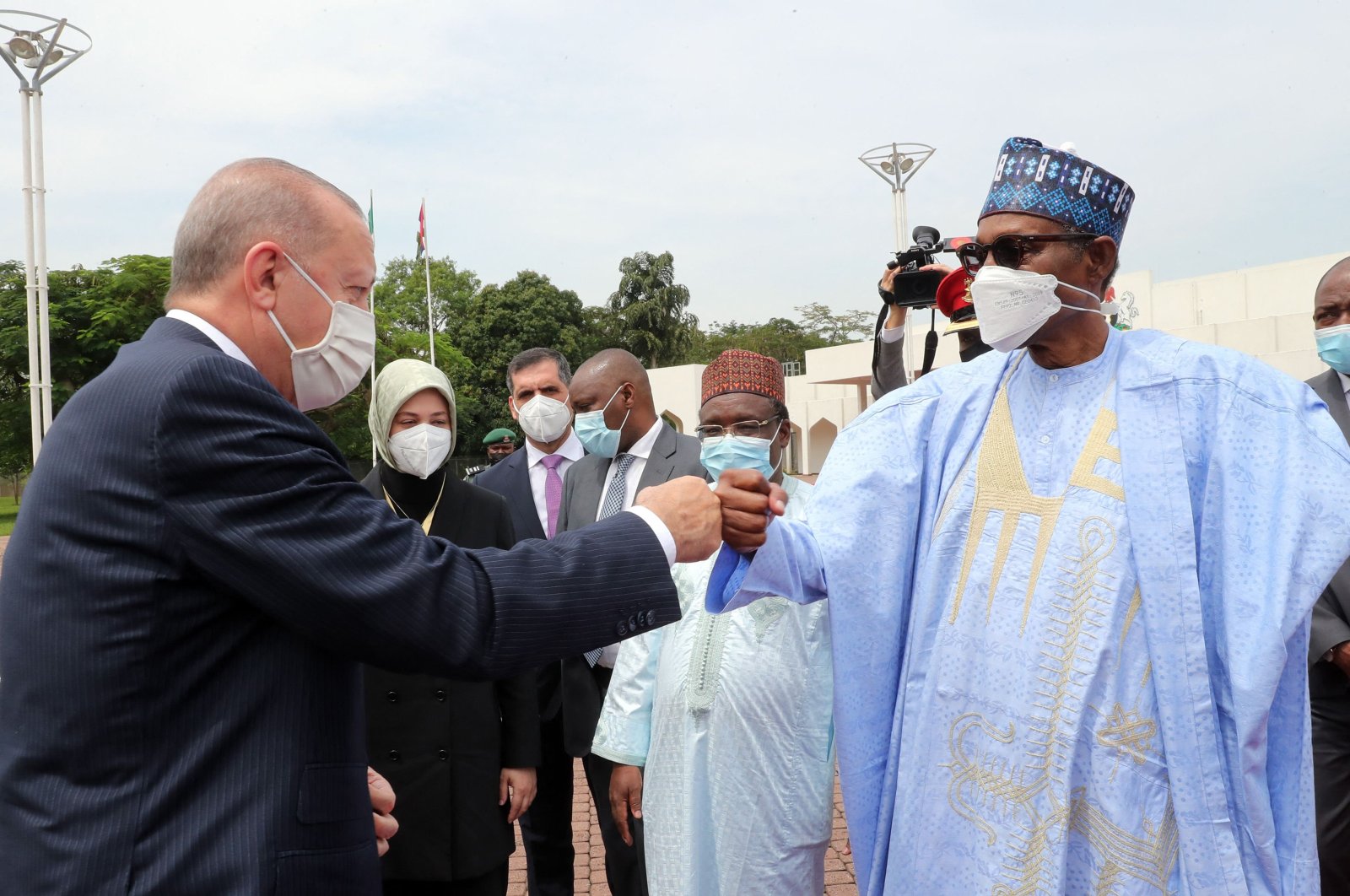 President Recep Tayyip Erdoğan is welcomed by President of Nigeria Muhammad Buhari (R) with an official ceremony at the presidential palace in Abuja, Nigeria. Oct. 20, 2021. (AFP Photo)
by DAILY SABAH WITH AA Dec 13, 2021 10:47 am
RECOMMENDED

Turkey's relations with African countries are based on cooperation and partnership with humanitarian values, unlike those established by Western powers, African academics and historians have stated.

The third installment of the Turkey-Africa Partnership Summit, the first held in 2008 in Istanbul and the second in 2014 in Equatorial Guinea's capital Malabo, will be held in Istanbul on Dec.16-18. Heads of states, ministers and representatives from international institutions from African countries will attend it.

While Turkey is gearing up for the summit, African academics and historians drew attention to the fact that Turkey's relations with continental countries are very different from those established by Western powers.

"By exploiting Africa, the former colonial powers exploited the continent's resources and raw materials while empowering themselves. Turkey, on the other hand, is more humane and strives for African peoples to use their own resources and take their destiny in their own hands."

Emphasizing that the third meeting of the Turkey-Africa Summit has an important place in developing relations, Bhuglah said: "This summit is the highest level of dialogue platform. With this summit, Turkey will be able to understand the real needs and intentions of the African people."

Nigerian academician from Abuja University, Abdulkadir Suleiman Mohammed, on the other hand, touched upon Turkey's increasing relations with African countries in recent years.

Noting that Turkey has improved its relations with African countries in the political, economic and even military fields, increased the number of embassies to 43 and Turkish Airlines (THY) flies to many countries, he said: "When we look at the steps Turkey has taken in Africa and the relations it has established, we see that it is very different from the approaches of other countries such as France, England and the United States."

"The long years of Western powers' support for dictators, their clandestine armament, economic interests, as well as their divisive policies have done more harm than good to the continent. Turkey has a better reputation than these self-conscious countries. This situation benefits Turkey in all areas of the economy," he added.

Emphasizing that Turkey's relations with Africa will improve in many areas with the third summit, Mohammed said: "Turkey is the strategic partner of the African Union (AU) and Turkey's direct investments have reached $6.5 billion (TL 94 billion). Turkish companies also operate in many parts of the continent, especially in construction."

President Recep Tayyip Erdoğan in October once again reaffirmed that Turkey’s approach in its ever-growing relations with African countries is based on equal partnership and a win-win principle, emphasizing the strong will to further develop commercial ties. Earlier in the month, he also held a four-day diplomatic tour to three African countries as part of the country's African policy to contribute to the economic and social development of the continent with peace and stability, as well as to develop bilateral relations on the basis of equal partnership and mutual benefit. During the tour, Erdoğan underlined that Western countries for years exploited the continent of Africa for their own interests and reiterated his message for a fairer world by calling the oppressed to act together for this aim.

Turkey’s engagement with the African continent has been gaining pace over the years. Since taking office nearly two decades ago, first serving as prime minister, Erdogan has been fostering ties with Africa, presenting Turkey as a fair player than the continent’s former colonial powers. Ankara has been stressing the desire to advance relations with the continent on the basis of a win-win relationship and equal partnership while observing mutual respect. Both sides have been vowing to tap into their greater potential when it comes to further expanding and deepening relations.

Having adopted a one-dimensional foreign policy shaped by its relations with the West for decades, Turkey has shifted its direction to a more diversified, multidimensional and independent foreign policy since the end of the Cold War. Turkey's opening up to Africa dates back to the action plan adopted in 1998 but took major steps in 2005, which was declared the “Year of Africa” by Ankara. Turkey was accorded observer status by the AU the same year. In a reciprocal move, the AU declared Turkey its strategic partner in 2008, and relations between Africa and Turkey gained momentum when the first Turkey-Africa Cooperation Summit was held in Istanbul with the participation of representatives from 50 African countries that year.

The third Turkey-Africa Partnership Summit is expected to launch a new stage in Turkey’s relations with the AU and African countries, according to Turkey’s Foreign Ministry.