Azerbaijan asks ICJ to force Armenia to cede mine maps 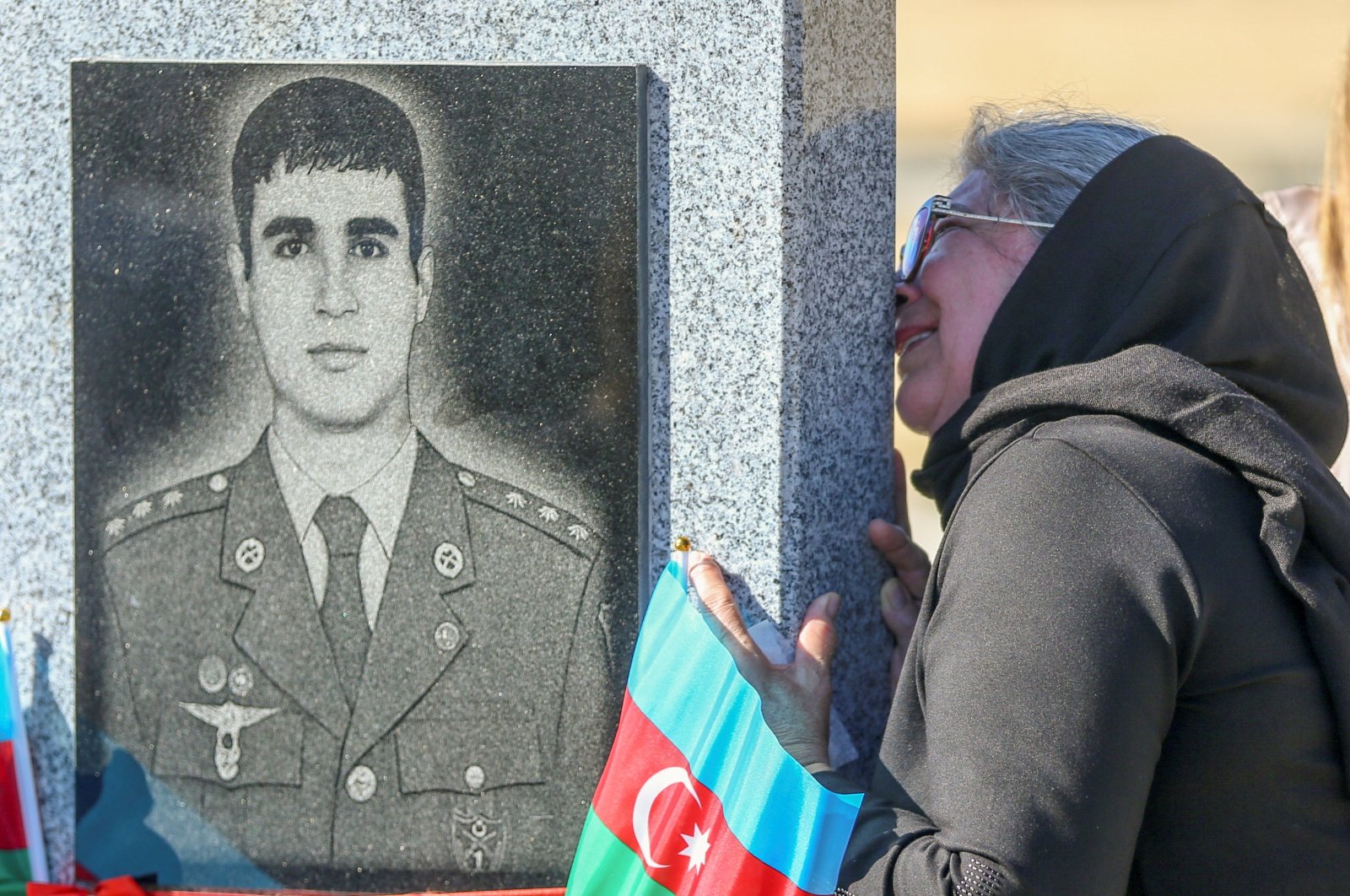 A woman grieves at a cemetery during a commemoration for Azerbaijani service members killed in last year's conflict over the region of Nagorno-Karabakh on its first anniversary, Baku, Azerbaijan, Sept. 27, 2021. (Reuters Photo)
by DAILY SABAH WITH AGENCIES Oct 18, 2021 3:25 pm
RECOMMENDED

Azerbaijan Monday applied to the International Court of Justice (ICJ), also known as World Court, to order neighboring Armenia to hand over maps showing the location of landmines in the Karabakh territories liberated by Azerbaijani forces from the nearly three-decade Armenian occupation last year, while the judges are also considering tit-for-tat claims that the other side violated an anti-discrimination treaty.

This time last year, Azerbaijani troops drove Armenian forces out of swathes of territory they had occupied since the 1990s in and around the Nagorno-Karabakh region, before Russia brokered a cease-fire.

Azerbaijan accused rival Armenia at the U.N.'s top court of laying landmines as part of a campaign of "ethnic cleansing" despite the end of last year's war.

Azerbaijani Deputy Foreign Minister Elnur Mammadov told judges that the emergency measures sought were urgently needed to protect against the "dire threat" posed by Armenia's refusal to hand over the maps.

"Armenia's campaign of ethnic cleansing and incitement to violence against Azerbaijanis is ongoing," Mammadov told The Hague-based court.

The campaign of placing landmines "is quite simply a continuation of Armenia's decadeslong ethnic cleansing operation and an attempt to keep these territories cleansed of Azerbaijanis," Mammadov said.

He said that after the "liberation" of parts of the region last year, when Azerbaijani civilians tried to return to their homes they found the area had been "carpeted" with landmines by Armenia.

Armenia "still to this day refuses to share complete and accurate maps of the mines needed to progress clearance operations, and even continues to plant new mines on Azerbaijan's territory."

The two former Soviet republics battled for six weeks last autumn over the region of Nagorno-Karabakh in a conflict that claimed more than 6,500 lives.

At least 106 Azerbaijanis including 65 civilians had been killed or injured by mines since the end of last year's conflict, Mammadov said.

"This is quite simply a continuation of Armenia's decades-long ethnic cleansing campaign an attempt to keep this territory cleansed of Azerbaijanis in pursuit of some desperate revanchist design," he said.

The Azerbaijani minister also urged the court to stop what he called "false and inflammatory" social media statements by its rival.

Armenia last week accused Azerbaijan at the ICJ of a "cycle of violence and hatred perpetrated against ethnic Armenians".

Azerbaijan rejected Armenia's claim and said that it was in fact the other way around and that it was Armenia that carried out ethnic cleansing.

In their ICJ cases, both countries accuse the other of breaching a U.N. treaty, the International Convention on All Forms of Racial Discrimination (CERD).

The World Court, formally known as the International Court of Justice (ICJ), is the United Nations court for resolving disputes between countries. It has yet to determine whether it has jurisdiction in this case.

The ICJ, set up after World War II to rule in disputes between member states, can order emergency measures pending the resolution of full cases that can take many years.

The hearings on Monday and last week do not go into the merits of the cases but instead, deal with requests from both sides for emergency measures while the court considers the claims.

While the two rival Caucasus countries accuse each other of violations during last year's armed conflict, both sides have also sent warm messages to improve the broken ties.

Most recently, Azerbaijan's Foreign Minister Jeyhun Bayramov said last week that Azerbaijan is ready to normalize its relations with Armenia under the scope of international legal principles, sovereignty and territorial integrity.

Fresh clashes erupted between Armenia and Azerbaijan in late September, rekindling the Caucasus neighbors' decadeslong conflict over the region. During the conflict, Azerbaijan liberated several towns and nearly 300 settlements and villages from Armenian occupation.

The two countries signed a Russian-brokered agreement on Nov. 10, 2020 to end the fighting and work toward a comprehensive resolution.

On Jan. 11 this year, the leaders of Russia, Azerbaijan, and Armenia signed a pact to develop economic ties and infrastructure to benefit the entire region. It included the establishment of a trilateral working group on Karabakh.