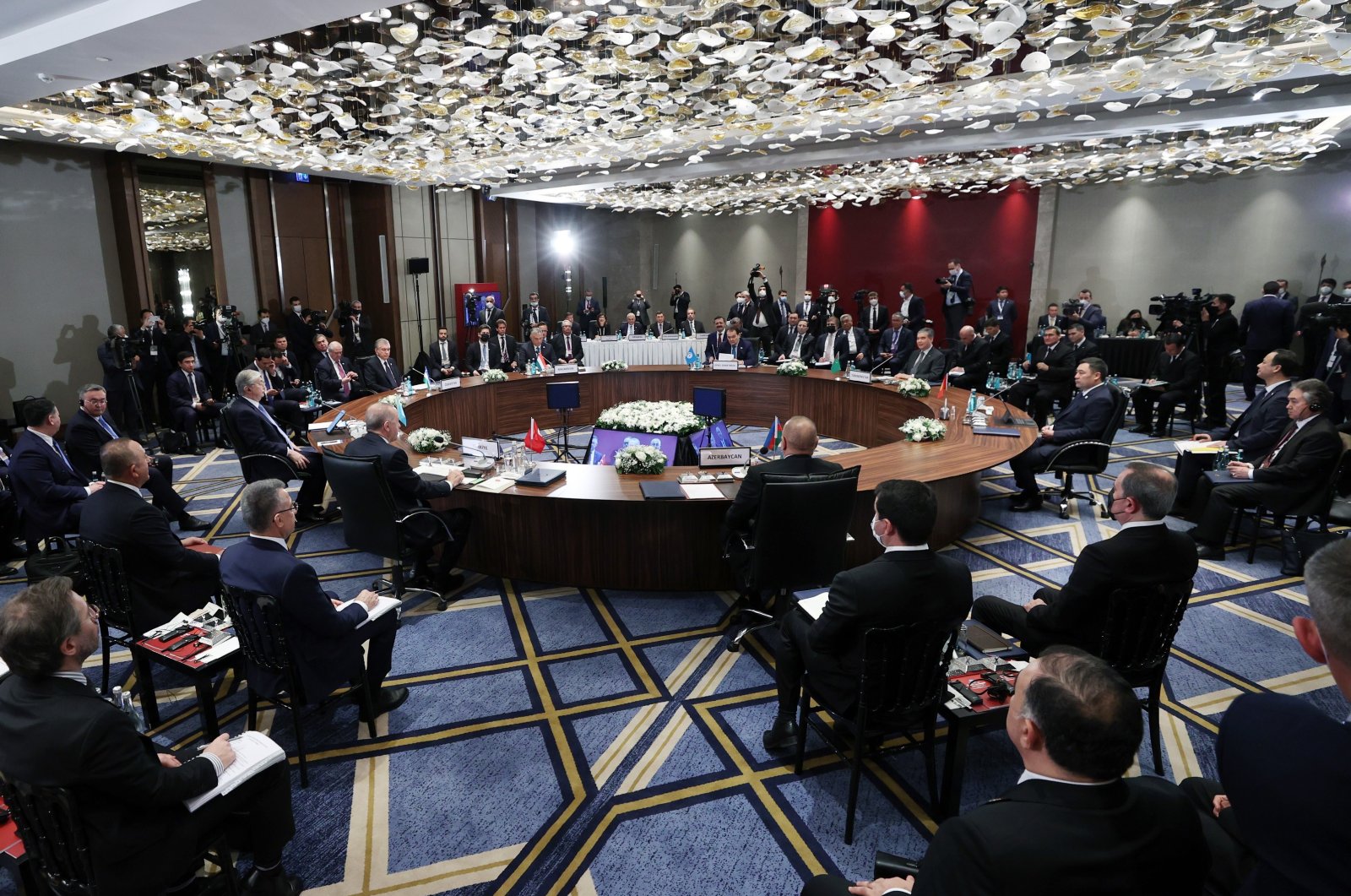 The people of Azerbaijan expressed support for the decisions made during the eighth summit of the Turkic Council held in Istanbul under the chair of President Recep Tayyip Erdoğan on Friday.

The Turkic Council creating a stronger institutional structure by adopting the name "Organization of Turkic States," the "Turkic World 2040 Vision" being accepted, and Azerbaijani President Ilham Aliyev being presented with a medal of honor on the occasion of the Karabakh victory were all moves welcomed in Azerbaijan.

Azerbaijani politicians and intellectuals believe the Turkic world will continue to become stronger and that the integration between countries will be consolidated until it reaches "Turkic world citizenship."

Azerbaijani politician Sabir Rüstemhanlı described the summit as "the beginning of a new era in the history of the Turkic world."

Rüstemhanlı stated that Turkic states made this progress step by step after the collapse of the Soviet Union and emphasized that the Organization of Turkic States took on a strong institutional structure with Uzbekistan as a full member and Turkmenistan as an observing member.

He underlined that the Organization of Turkic States gives hope for closer cooperation in the future with the participation of brotherly countries, saying: "Now, the way for the establishment of unity between the Turkic states has been paved. We can call it the Turan Union. A cooperative military, economic and culturally unified structure can be established in the future. The outlines of all these were drawn at the summit."

Rüstemhanlı said that the medal of honor presented to Aliyev "shows that the victory of Karabakh was appreciated not only in Azerbaijan but also in other Turkic states."

Stating that cooperation and integration between Turkic states will accelerate, he said: "Now, a common alphabet, common language issues are discussed. The Turkic world is a geography with rich literature and history. It is the heart of Eurasia. It is a region that has a serious influence on world culture. The unity of the Turkic states is of great importance for the rich wealth of the region to remain with the countries of the region. Strong and effective Turkic unity is no longer a dream. This was confirmed at the summit."

The head of the Turkish-Islamic Studies Center, Telman Nusretoğlu, also stated that the reality of the increasingly globalized world and the Silk Road, which has been revived with the increasing political and economic attractiveness of Asia, offers new opportunities for the closer integration of the Turkic states.

Nusretoğlu emphasized that unity between the states has become necessary for the Turkic world, which has established the oldest and longest-lasting empires in Eurasia, to overcome regional and global risks and threats.

Reiterating the words of Aliyev, "Turkic states are natural allies," Nusretoğlu noted that important steps were taken toward the formation of strategic alliances of natural allies, and their future plans were announced to the world at the Istanbul summit.

Nusretoğlu also said Aliyev being awarded the medal of honor for the Karabakh victory is a clear indication of the Turkic states' respect for Azerbaijan, and said: "This victory of the brotherhood of Turkey and Azerbaijan has had a very positive impact on the unity of the Turkic world. Following the suggestion of the president of Uzbekistan, accelerating the efforts for the establishment of the Turkic Investment Fund and changing the name of the organization parallel to the opening of the headquarters in a historical building contain important messages. The Turkic states will support joint education programs, free movement of capital and joint investments in the Turkic world. Of course, one day we will also start talking about 'Turkic world citizenship,' where a passport and visa-free regime is applied. We still have a long way to go."

The 8th Summit of the Cooperation Council of Turkic Speaking States (Turkic Council) was held on an island southeast of Istanbul. The meeting held under the theme "Green Technologies and Smart Cities in the Digital Age."

During the meeting, the organization's name was changed to the Organization of Turkic States.

Speaking after the Turkish president, Aliyev said that Erdoğan showed Baku that it is not alone in the world and that Ankara will always stand by it, referring to last year's Karabakh conflict in which Turkey threw its support behind Azerbaijan, whose Nagorno-Karabakh region had remained under illegal Armenian occupation for nearly three decades before finally being liberated last November.

During a 44-day conflict last year, which ended in a truce on Nov. 10, 2020, Azerbaijan liberated several cities and nearly 300 settlements and villages in Nagorno-Karabakh from Armenia's illegal occupation. On Nov. 10, the two countries signed a Russia-brokered deal to end fighting and work toward a comprehensive solution.

The Turkic Council was formed in 2009 to promote cooperation among Turkish-speaking states. It consists of Azerbaijan, Kazakhstan, Kyrgyzstan, Turkey and Uzbekistan as member countries and Hungary as an observer state.