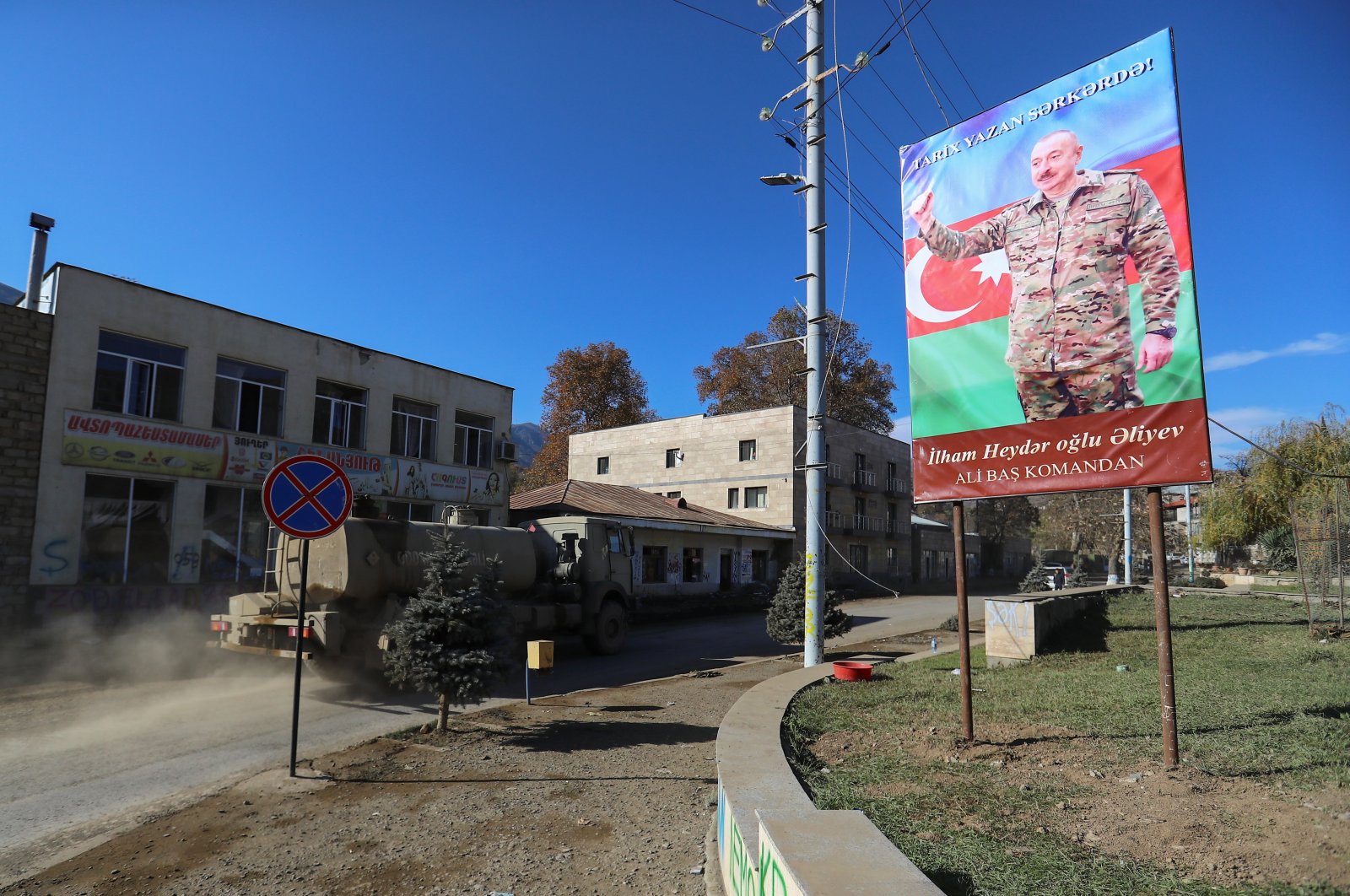 A board with an image of Azerbaijani President Ilham Aliyev is on display in Hadrut town, which recently came under the control of Azerbaijan's troops following a military conflict against Armenian forces and a further signing of a cease-fire deal, in the region of Nagorno-Karabakh, Nov. 25, 2020. (REUTERS)
by DAILY SABAH WITH AGENCIES Nov 26, 2020 11:21 am
RECOMMENDED

Azerbaijan will revive and restore all of its territories liberated from nearly three decades of Armenian occupation, the country's president said Wednesday.

"We have major plans for the restoration of these lands. These plans are already being implemented, (and) infrastructure projects are being carried out," President Ilham Aliyev said in an address to the nation after the Azerbaijani army entered the reclaimed region of Kalbajar.

He said Kalbajar is a historic part of ancient Azerbaijan and one of its largest districts.

"We will restore Kalbajar. Let no one have any doubts about that, and life will return there. Agriculture will develop in Kalbajar, especially livestock breeding. We have large pastures there," he said.

The Defense Ministry in Baku had earlier confirmed that "units of the Azerbaijani army entered the Kalbajar region on Nov. 25," under the deal signed earlier this month by Armenia, Azerbaijan and Russia.

Wedged between the Nagorno-Karabakh region and Armenia, Kalbajar was initially scheduled for handover on Nov. 15, but Azerbaijan postponed the deadline due to humanitarian reasons.

"Engineering work has been completed to ensure the movement of our units in this direction, the difficult mountain roads along the route of the troops' movement are being cleared of mines and prepared for use," the ministry said in a statement.

Armenia agreed to hand over three districts around Karabakh, namely Aghdam, Kalbajar and Lachin, as part of the deal that stopped an Azerbaijani offensive that had reclaimed swathes of territory lost to Armenian separatists in a war in the 1990s.

Azerbaijan, the decisive victor of the Nagorno-Karabakh conflict, previously allowed 10 more days for occupying Armenians to evacuate the district, which borders Nagorno-Karabakh, due to climatic and natural conditions.

Aliyev in his speech accused Armenia of "brutally exploiting" the vast natural resources of the region.

"I have ordered officials to prepare a master plan for the reconstruction of the city. Not just the city of Kalbajar but also all other cities (in the region), and life will return there," he said.

Aliyev said the illegal settlement in Kalbajar was "another crime" committed by Armenia.

"People from Armenia and foreign countries have settled there illegally. This is a war crime under the Geneva Convention. We will hold the enemy accountable," he added.

He said Armenia's leadership will have to answer for all of its "war crimes" and destruction.

"I could not find a single safe building in Aghdam. The same was the case in Fuzuli and Jabrayil. They have destroyed everything like a savage tribe that has passed through," the Azerbaijani president said.

The historical sites of Kalbajar are a "great asset" for Azerbaijan, Aliyev said.

He emphasized that both mosques and churches in the liberated region hold equal significance as "historical treasures" for his country. He explained that the churches in Kalbajar belong to the ancient state of Caucasian Albania.

"Many historical documents confirm this (fact). This is no secret. Armenia's so-called 'historians' and fraudsters have simply 'Armenianized' ancient Albanian churches, added their own inscriptions and falsely claimed them as their own," said Aliyev.

"Anyone who looks at history can see that czarist Russia abolished the Albanian Church in the 1830s and gave all its property to the Armenian Gregorian Church. That is when Armenian priests and their patrons began to appropriate these churches."

He said Azerbaijan has thwarted Armenia's aim of "erasing the history" of Caucasian Albania.

"Azerbaijan has a broad scientific base on this issue. There are (many) research works available. These works are, and should be, shared not only with the scientific community but also with the world as a whole," he said.

On the natural landscape of Kalbajar, the president pointed out that many of Azerbaijan's large rivers, including the Tartar River, the Bazarchay and the Khachinchay, originate in the district.

Armenia blocked the flow of water to deprive many Azerbaijani regions of natural irrigation, he said.

"They cut off the water supply in the summer and released it in the winter, flooding the lands. This was environmental terrorism against us," Aliyev said.

"The water of the Tartar River, which originates in Kalbajar, was first collected in the Sarsang reservoir and then in the Sugovushan reservoir. This served the occupier's (Armenia) interests, while we did not get any water."

He said the water supply has resumed since the Azerbaijani army reclaimed the Sugovushan area.

Aliyev also called out Armenia for destroying nearly 24,000 hectares of forests in Kalbajar.

He said Armenian forces cut down trees to sell them and burned down parts of the forest "to create an environmental catastrophe."

He added that the deforestation carried out by Armenia and the way it tried to change the course of rivers, along with its destruction of historical Azerbaijani sites and "genocide" of civilians were all signs of a "terrorist state."

"They broke into and lived inside people's houses in Kalbajar. They burned down schools and killed pets that they couldn't take (while leaving the occupied lands)," said the Azerbaijani president.

"I will repeat this: our victory is not only a victory over the Armenian state, but we have also destroyed Armenian fascism."

Relations between the two ex-Soviet republics have been tense since 1991 when the Armenian military occupied Upper Karabakh, also known as Nagorno-Karabakh, a territory recognized as part of Azerbaijan.

Fresh clashes erupted on Sept. 27, and the Armenian Army continued its attacks on civilians and Azerbaijani forces for 44 days, even violating two humanitarian cease-fire agreements. Baku liberated several cities and nearly 300 of its settlements and villages from the Armenian occupation during this time.

On Nov. 10, the two countries signed a Russia-brokered deal to end fighting and work toward a comprehensive solution. Turkey welcomed the truce, which was a result of Baku's military successes, giving it an upper hand over Yerevan to resolve the three-decadelong dispute.

Previously, Azerbaijan and Armenia have traded accusations of war crimes in fierce fighting.

Azerbaijan's Prosecutor General Kamran Aliyev said his office was studying the footage as part of a probe into inhumane treatment of Azerbaijani prisoners and the defilement of bodies of Azerbaijani troops.

"We have also initiated an investigation into the inhumane treatment of Armenian servicemen that were taken prisoner," he said in an interview.

"There are many fake videos. But we must say frankly that there are also videos that could be authentic," he said. "Azerbaijan is a law-based state and we are reacting to such facts."

The attacks "claimed the lives of 94 civilians, including small children, women and elderly people," Aliyev said, adding that four Armenian separatist leaders – including the president of the unrecognized Nagorno-Karabakh republic, Arayik Harutyunyan – were charged with war crimes in absentia.

Aliyev said his office as well as Azerbaijan's state security services are also investigating the use of foreign fighters by Armenian separatists.

"The mercenaries were mostly ethnic Armenians from other countries," Aliyev said.

"Among those wanted are nationals from France, Georgia, and Crimea, as well as fighters from the Syrian wing of PKK," he added, referring to the YPG.

Previously, Turkey's Ombudsman Institution prepared a report on Armenia's war crimes and human rights violations against Azerbaijan, detailing the atrocities by the Armenian Army in the Nagorno-Karabakh region before its recent liberation.

Speaking to Anadolu Agency (AA), the head of the institution, Şeref Malkoç, said from this week on, the report will be sent to all the related institutions both in and outside Turkey, including the European Union and EU commissions on human rights.

Malkoç added that one of the main duties of the Ombudsman Institution is to work toward improving and protecting human rights at both the national and international levels. He said they have visited Azerbaijan and examined the civilian settlements damaged in the Armenian attacks.

"Of course, we all wish not to have any war at all. However, according to international law, either in self-defense or for other possible reasons, there might be wars on the fronts. However, deliberately hitting a civilian area that is 100-150 kilometers away from the war front is a crime against humanity. It is against the basic rights referred to in the European Convention on Human Rights, as well as the Geneva Convention," Malkoç said.

It consists of seven chapters, including "The Nagorno-Karabakh Problem," "Determinations Reached after Physical Site Visit" and "The Evaluation of the Conflicts from the Perspective of Human Rights."

"Apart from these, we also made a chronological list of the Armenian attacks in our report. We have inspected the photographs of the civilians, who fell victim to Armenian attacks, and the locations they were killed at," Malkoç said.

"By determining the ones who committed war crimes, killed civilians, damaged the environment, killed infants or elderly, people who have nothing to do with the war, we are working to bring these criminals to the international court to be judged for their crimes," he added.

"We have done our part. Now, it is time for international institutions to do whatever it takes to make sure the victims get justice."