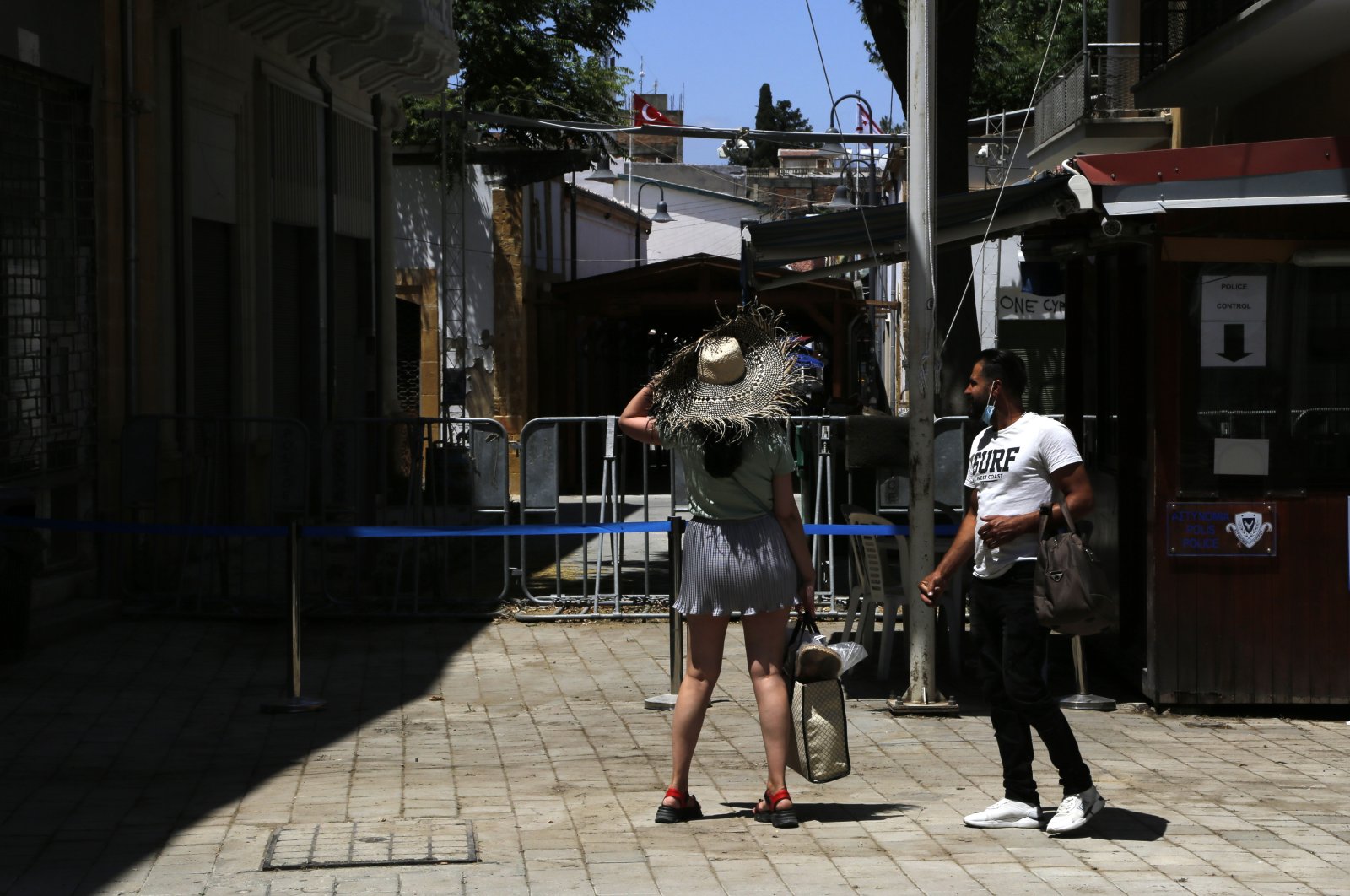 Tourists stand in front of police barriers at a closed crossing point between the Greek Cypriots (south) and the Turkish Cypriots (north), on the Ledras pedestrian street in the divided capital Nicosia, on the island of Cyprus, June 2, 2021. (AP Photo)
by Daily Sabah with Reuters Jun 02, 2021 2:46 pm
RECOMMENDED

Checkpoints on the island of Cyprus linking the Greek and Turkish sides will reopen on Friday, the United Nations said Wednesday, marking the first time restrictions have been eased since December 2020 because of the COVID-19 pandemic.

The island of Cyprus is split between its Greek and Turkish Cypriot populations, with a number of designated checkpoints controlling movements between the north and south of the island.

The sealed checkpoints up-ended the lives of thousands who would cross the island daily either for work, family commitments or just to meet friends. On some days, kilometer-long queues would form at vehicle crossings.

"The reopening of all crossing points will facilitate free movement, promote people-to-people contacts, build trust and have an overall positive socio-economic impact across the island for the benefit of all Greek Cypriots and Turkish Cypriots," the U.N. mission on Cyprus, UNFICYP, said in a statement.

A committee of health experts from both sides will assess the impact of the opening on the pandemic. People who cross will require a 7-day negative antigen test or PCR test, the peacekeeping mission said.

Vehicle and pedestrian crossings have been subject to on-and-off closures since February 2020, when the Greek Cypriot side shut the checkpoints for the first time in almost two decades as a precaution.

Since then there has been some easing of restrictions, but different rules on each side made crossings impossible for many.

"It affected many people, couples, families, people working on both sides of the divide as well as having an economic impact," said Kemal Baykallı, a member of the peace platform Unite Cyprus Now.

"I think what this has shown us is that what we take for granted can easily be taken away from us in the lack of a settlement," Baykallı said.

The island has been divided since 1964 when ethnic attacks forced Turkish Cypriots to withdraw into enclaves for their safety. In 1974, a Greek Cypriot coup aiming at Greece's annexation led to Turkey's military intervention as a guarantor power. The Turkish Republic of Northern Cyprus was then founded in 1983.