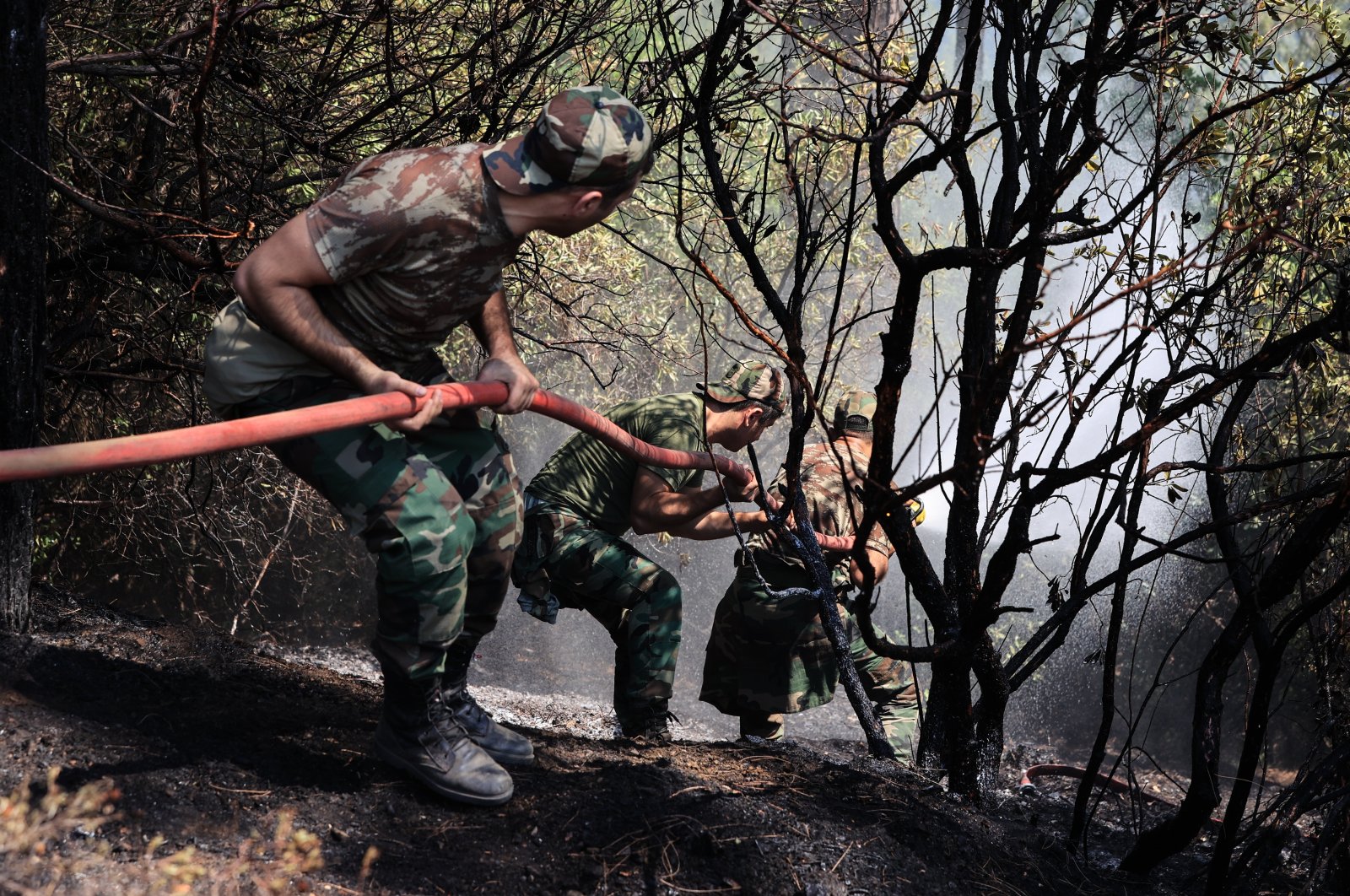 Azerbaijani firefighters help efforts to extinguish a fire in the town of Marmaris, in Muğla, southwestern Turkey, July 31, 2021. (AA PHOTO)
by DAILY SABAH WITH AA Aug 02, 2021 8:09 am
RECOMMENDED

As forest fires continued threatening Turkey on Monday, countries lined up to offer their condolences, messages of solidarity and airplanes to help the country fight the fires.

"The EU stands in full solidarity with Turkey at this very difficult time. I thank all the countries which have offered help," said EU Commissioner for Crisis Management Janez Lenarcic, adding they stand ready to provide further assistance.

Spanish Foreign Minister Jose Manuel Albares called his Turkish counterpart Mevlüt Çavuşoğlu to extend his condolences and announce the decision to send two firefighting planes, a cargo plane and a military unit specialized in emergencies, to help the extinguish the blazes. The planes were set to arrive on Monday and Tuesday in Turkey. Russia, Ukraine, Azerbaijan and Iran had dispatched firefighting planes to Turkey last week, boosting the country's fleet.

Qatar also has sent a team to Turkey to take part in search and rescue activities amid the forest fires, local media reported Sunday. Azerbaijan has already deployed some 100 firefighters to the fire-hit areas. According to Qatar's state news agency QNA, a team from the Qatar International Search and Rescue Group of the Qatari Internal Security Forces departed for Turkey at the instruction of Qatar's Emir Sheikh Tamim bin Hamad Al Thani. Croatia will also send a firefighting plane to Turkey as part of the fight against the fires, Croatian Foreign Minister Gordan Grlic-Radman said on Twitter.

Elsewhere, Yemen, Palestine and Egypt expressed solidarity with Turkey as they conveyed their condolences to the country over the fires. Yemeni Foreign Minister Ahmad Awad bin Mubarak sent a message to his Turkish counterpart Çavuşoğlu, relaying his condolences to the families of those who lost their lives in the fires, according to Yemen's Foreign Ministry. Mubarak also wished a speedy recovery to those injured, stressing that Yemen is on the "fraternal" Turkish people's side in the fight against this natural disaster.

A delegation of Palestinian scholars also issued a message of condolence. "We are deeply saddened by the wildfires that have erupted in many parts of fraternal country Turkey," it said. "We extend our condolences to those who lost their lives and to their families. We heartily share the pain of the fraternal Turkish people." The message also noted that Palestine is praying for all the firefighting teams and wishes them success.

Meanwhile, Egypt's Al-Azhar University published a statement expressing its sorrow. The university conveyed its condolences for the forest fire victims and their relatives as well as all the workers and volunteers trying to stem the spread of the massive fires. Al-Azhar also wished for urgent healing to the injured, according to a statement on Facebook. The statement said the university was on the side of the Turkish people in the face of this tragic event. On July 31, the Egyptian Foreign Ministry also sent a message of solidarity to Turkey as it battled the flames.

Kyrgyzstan President Sadyr Zhaparov also sent a message to the Turkish president, extending condolences for the lives lost. Sweden also expressed solidarity with Turkey over the blazes. "Today, I extend my condolences for the loss of lives by the deadly wildfires in Turkey. Our solidarity and thoughts are with the people of Turkey and the firefighters battling the blazes," Sweden's Foreign Minister Ann Linde said on Twitter.

Meanwhile, Ammar al-Hakim, the Chairperson of the National Wisdom Movement of Iraq, also pledged solidarity with Turkey.
“We are in full solidarity with the Turkish state and the people; we convey our condolences to the friends and families of the deceased,” al-Hakim said.
The Iraqi party leader also urged the international community to provide assistance to the areas and people devastated by the wildfires.