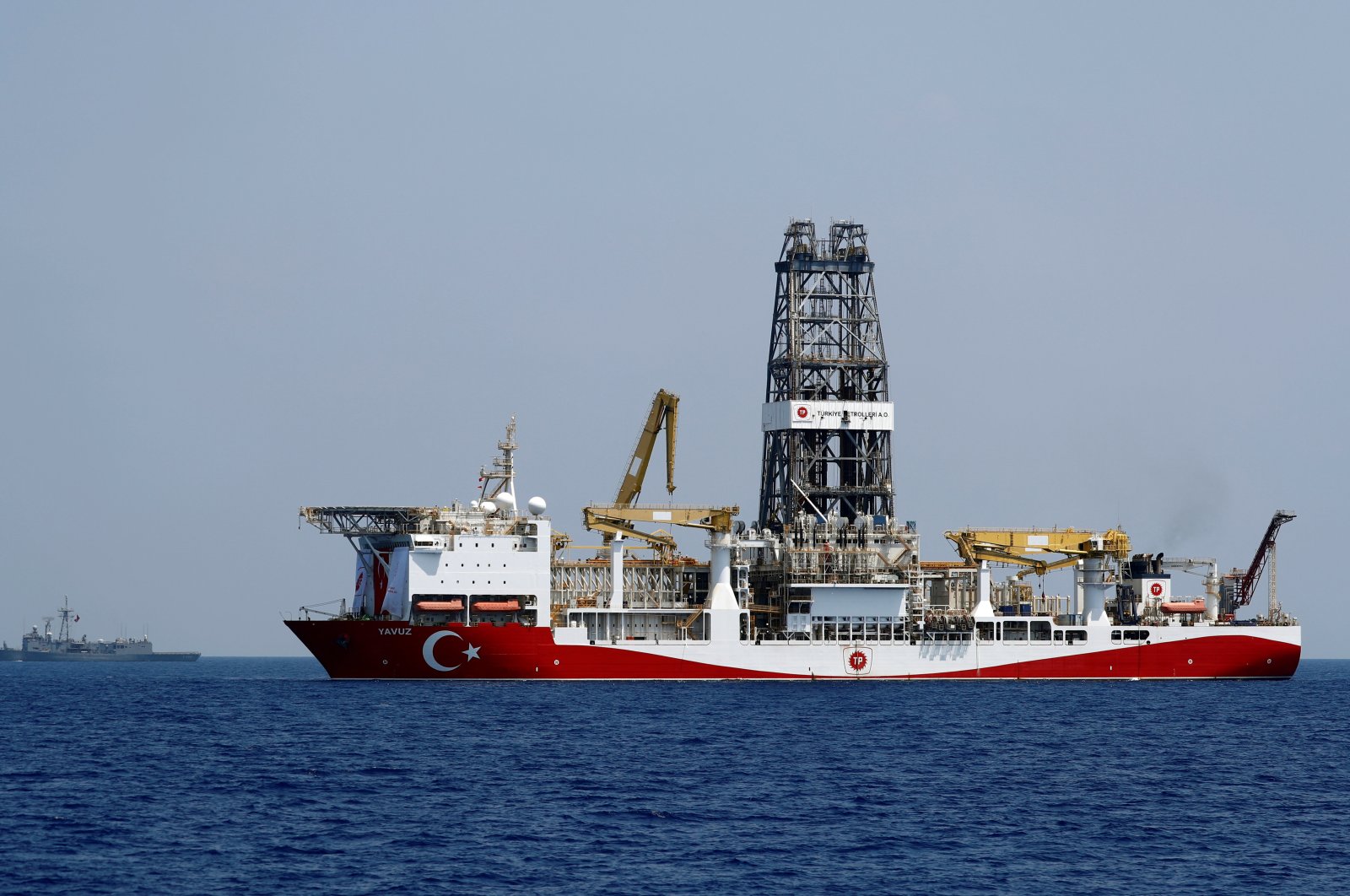 As tensions have flared up since the discovery of significant oil and gas reserves in the Eastern Mediterranean, Cairo and Athens have signed a maritime agreement violating the rights of Turkey, Libya and Turkish Cypriots

A recent agreement signed between Greece and Egypt on the delimitation of maritime jurisdictions in the Eastern Mediterranean is "null and void," President Recep Tayyip Erdoğan said Friday, underlining that Turkey will decisively pursue its agreement with the Libyan government.

Erdoğan said the deal “has no value” and reminded that Turkey paused its hydrocarbon exploration efforts upon German Chancellor Angela Merkel’s request for a solution, but drilling has resumed immediately as Athens and Cairo went back on their word. “There’s no need for discussion with those who have no rights, especially in maritime zones,” he added.

Turkey pointed out that the deal usurped and ignored the rights and continental shelves of both Ankara and Tripoli. Foreign Minister Mevlüt Çavuşoğlu late Thursday indicated that the text and map of the agreement had yet to be revealed, adding: “However, it’s obvious by the given coordinates that the deal not only violates the rights and continental shelf of Turkey but also of Libya.”

“Hence, an agreement that violates our continental shelf, which we have reported to the U.N., is null and void and the reason why we’ve come to this point is that countries like Greece and the Greek Cypriot administration, are trying to sign agreements with Egypt and Israel while ignoring Turkey,” Çavuşoğlu told Anadolu Agency (AA).

“We’ll continue to show them and the world that this agreement is null and void on the table and in the field,” the minister stated.

Turkey’s statements were followed by the official Libyan government which similarly condemned the Greek-Egyptian deal.

“Libya will not allow violations of its maritime rights,” foreign ministry spokesman Mohammed al-Qablawi said on Twitter. Al-Qablawi reiterated Libya’s commitment to a memorandum of understanding concerning the delimitation of maritime jurisdiction signed with Turkey. Libya urges states bordering the Mediterranean to act in accord with the principles of international law, al-Qablawi also stressed. The Turkish Foreign Ministry in a written statement on the same day elaborated that there is no mutual sea border between Egypt and Greece. It reminded that Egypt, which surrendered an area of 11,500 square kilometers (4,440 square miles) with the so-called agreement it signed with the Greek Cypriot administration in 2003, has once again acted at the expense of and against the interests of the Egyptian people with this move.Ankara also said that Turkey will not allow such activities in the area and reiterated the country’s determination to protect both Turkey’s and Turkish Cypriots’ legitimate rights and interests in the Eastern Mediterranean.

“The United Nations Convention on the Law of the Sea is clear,” Mesut Hakkı Caşın, a law professor at Istanbul’s Yeditepe University, told Daily Sabah, adding that Turkey notified the U.N. about its deal with Libya, which was agreed upon by the governments of both countries. He added that according to the U.N., countries had to apply to mutual negotiations to solve maritime claims.

Caşın further underlined that Turkey did not take a step back from NAVTEX and simply paused its drilling activities for the sake of enhancing its relations with the European Union and opening the door for constructive dialogue with Greece. “Yet, Greece is the one sabotaging relations,” he said, underlining that Turkey also has the support of regional countries and even a circle within Egypt that is backing the Turkey-Libya deal.

“I believe that Egypt’s decision was merely political,” the law expert pointed out, saying that Cairo entered a disadvantageous deal with Greece.

“Meis and Rhodes islands do not have the right of exclusive economic zones,” Caşın elaborated. He referred to Kastellorizo (Meis), one of the smallest Greek islands in the Aegean Sea and only 2 kilometers away from the Turkish coast.

Saying that Egypt lost a substantial portion of its maritime zone by making a deal with Greece instead of Turkey, former ambassador Oğuz Çelikkol stated: “The greatest reaction to the Egyptian government will come from the Egyptian people themselves. The (Abdel-Fattah) el-Sissi regime seems to have given up on a large maritime zone through the agreement with Greece.”

Greece has to discuss the issue with Turkey, Çelikkol told the Demirören News Agency (DHA), underlining that otherwise, problems in the region will continue.

Dendias, for his part, said the maritime agreement with Cairo was “legitimate” and “reflects the dimensions of cooperation between the two countries in combating threats in the region.”

“Following the signing of today’s agreement, the null and void Turkey-Libya agreement has ended up where it belonged from the very first moment: in the rubbish bin,” Dendias said, adding that he called on every country in the region “to follow the example of this agreement we signed today and the corresponding agreement that we signed a few months ago with Italy.”

Greece accordingly dared to state Thursday that the deal on exclusive economic zones (EEZ) in the Eastern Mediterranean is “in accordance with international law.” Greek Prime Minister Kyriakos Mitsotakis said the deal is “a legitimate agreement that fully satisfies both countries.”

The maritime pact asserted Turkey’s rights in the Eastern Mediterranean in the face of unilateral drilling by the Greek Cypriot administration, clarifying that the Turkish Republic of Northern Cyprus (TRNC) also had rights to the resources in the area. The pact took effect on Dec. 8.

Within this scope, Ankara has sent drilling vessels to the Eastern Mediterranean since last year, a move opposed by Athens and the Greek Cypriot administration which have threatened to arrest the ships’ crews and enlist European Union leaders to join their criticism.

Ankara has on every occasion vowed it wants to see energy as an incentive for political resolution on the island and peace in the wider Mediterranean basin, not a catalyst for further tensions. Yet, Egypt and Greece condemned the deal as “illegal” and a violation of international law. Tensions were already high between Greece and Turkey because of Turkish gas exploration in the Eastern Mediterranean off the coast of the island of Cyprus. The NATO members are also at odds over mineral rights, territorial waters, islands and airspace in the Aegean Sea. Turkey has the longest shoreline in the Eastern Mediterranean, making it a natural candidate for seeking reserves in the region in accordance with international law. The presence of the Turkish Cypriot government in Northern Cyprus also strengthens Turkey’s hands as the country defends the rights of the Turkish Cypriots in the region and insists that their consent is needed for any type of drilling activities.